An Easy Recipe for Venison Potstickers 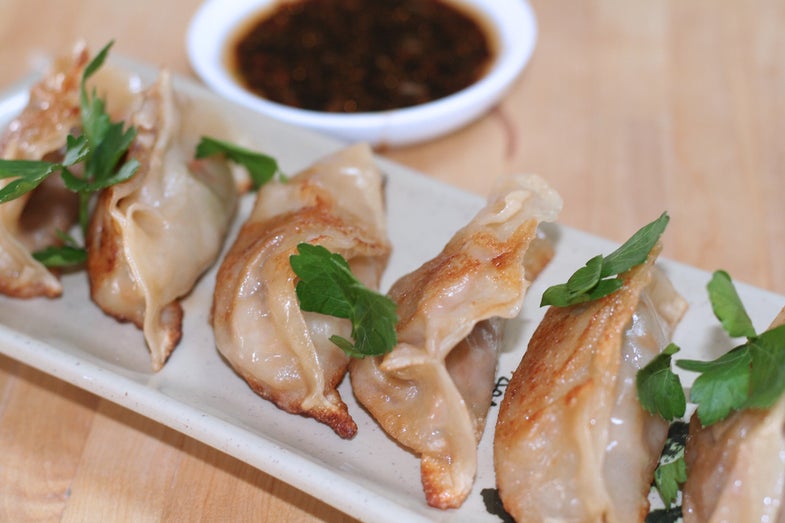 In the mid 90s, I was stationed in Sasebo, Japan, with the navy. Like most sailors, one of my favorite pastimes was to hit up the little bars out in the Ginza for late-night drinks. After several cocktails—and a number of out of tune karaoke songs—I would head home. On the way, there was a shop open late that made potstickers. After a night out drinking, nothing in the world tasted better than those dumplings. They were packed full of pork and garlic, and always had the perfect balance of chewy, soft, and a little crispiness.

Potstickers are still one of my favorite treats and, although we don’t have any late night dumpling joints here in Minnesota, I have found a way to have them on demand—and I don’t even have to stop at a Lee Ann Chins to get them.

Most potstickers or dumplings can be made at home with just a little practice (and after watching a couple of YouTube videos on how to fold them). The filling isn’t complicated and folding the dumplings is only as complicated as you want it to be. There are dozens of different ways to fold and cook them, but this is my favorite, and also one of the simpler methods. As far as filling goes: you can use any type of ground game you have handy. I chose venison this time around, but I’ve used duck, squirrel, and grouse in the past.

For my filling, I use a combination of ground game and kimchi. Many recipes call for cabbage, but I found a recipe a while back that used kimchi and stuck with it ever since. I really enjoy that fermented tang—and if you buy the really hot kimchi, it gives you some extra heat.

Combine all the ingredients except the venison, chicken stock, and the extra tablespoon of sesame oil in a food processor. Pulse until well combined. In a separate mixing bowl, combine the venison and the kimchi mixture until well combined. Using a little less than a tablespoon of the mixture, place it in the center of a round dumpling wrapper and fold according to the video. When you are ready to cook, work in small batches of about eight dumplings. Heat 1 tablespoon of oil in a non-stick pan with a cover. Fry the dumplings on one side for about 1 minute, then add the 3 tablespoons of chicken stock and put the cover on the pan. Let cook for about 3 minutes, then repeat the process if desired. If not, place the remaining dumplings on a cookie sheet lined with parchment paper and place in the freezer until frozen. Once the dumplings are frozen you can put them in a plastic bag and keep them in the freezer for another late night snack.

Combine the ingredients and serve with your dumplings.