When You Should – And Shouldn’t – Call To Ducks

Silence is sometimes golden when it comes to calling waterfowl 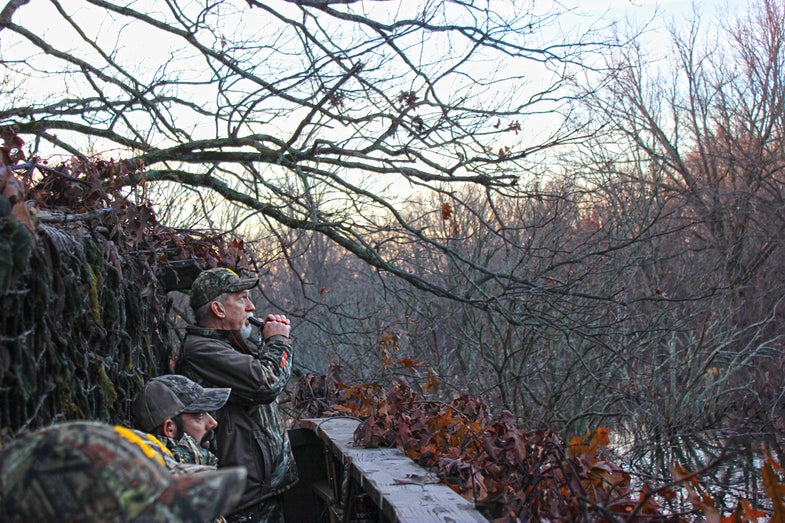 Waterfowl hunters know there’s a moment of truth with every approaching flock of birds, a time when the ducks will either commit to your spread or flare off. It’s very tempting in that moment to do everything you can to persuade the ducks to land. You want to relay the message to them that it’s safe and there’s nothing out of the ordinary. Maybe just a few light calls can seal the deal.“

Calling ducks is similar to leash training a dog,” says Kelly Haydel of Haydel Game Calls. “You only pull the leash when you need a dog to heel. The same goes for ducks. When you need the birds to come, ‘tug on the leash’ [in other words, call]. If the ducks are coming, resist the urge and don’t call. Simple quacks and feeding calls are okay, but there’s no need to hammer them.”

Haydel says there are times when you should not call—and, in fact, these “red zones” are responsible for many missed opportunities. The key is recognizing these quiet times and having the patience to wait on the birds.

“If the ducks happen to pass directly overhead and are pushing the limits of gun range, don’t call at that moment,” Haydel says. “Put your head down and freeze! This is when the blind and hunters are most vulnerable to being busted. Simply wait for the ducks to get to the edge of where you expect them to turn and then call. Most of the time, when the ducks are within the outer limits of my decoy spread (roughly 35 yards), I drop my calls and take control of my gun.”

Haydel says that in many instances, less calling is more effective. When he’s trying to coax ducks into shotgun range, it’s more about finesse and less about filling the air with reed-splitting quacks.

“I call very sparingly compared to a lot of hunters,” says Haydel. “Why? Because what I do works. I watch the ducks and how they respond to the call. If those duck are committed, then I lightly coax them. When needed I hit them hard, but I get off of the call once I’ve gotten their attention.”

Like many hunters, Haydel uses a jerkline on his decoys, but even this needs to be done with some level of subtlety. Movement is a great attractant at a distance, but when the birds are closing in, Haydel drops the jerkline so that the motion and unnatural splashing don’t foul up the final approach.

Ultimately, Haydel says, to be a great waterfowl hunter, you must consider yourself an air traffic controller. When the birds are circling, you give them the command to turn with calls, and when the ducks are lined up, you use soft calls to gently act as “runway lights” and bring the birds to rest. The most valuable instruction, Haydel says, is time spent experimenting in the field.

“More time in the blind will result in better skills, knowing when to call and when not to call. Watch the ducks and their reactions. Make changes to timing, volume, and how often you call, and you will come up with the right recipe. In a way, it’s not much different from cooking—every duck gumbo is a little different!”