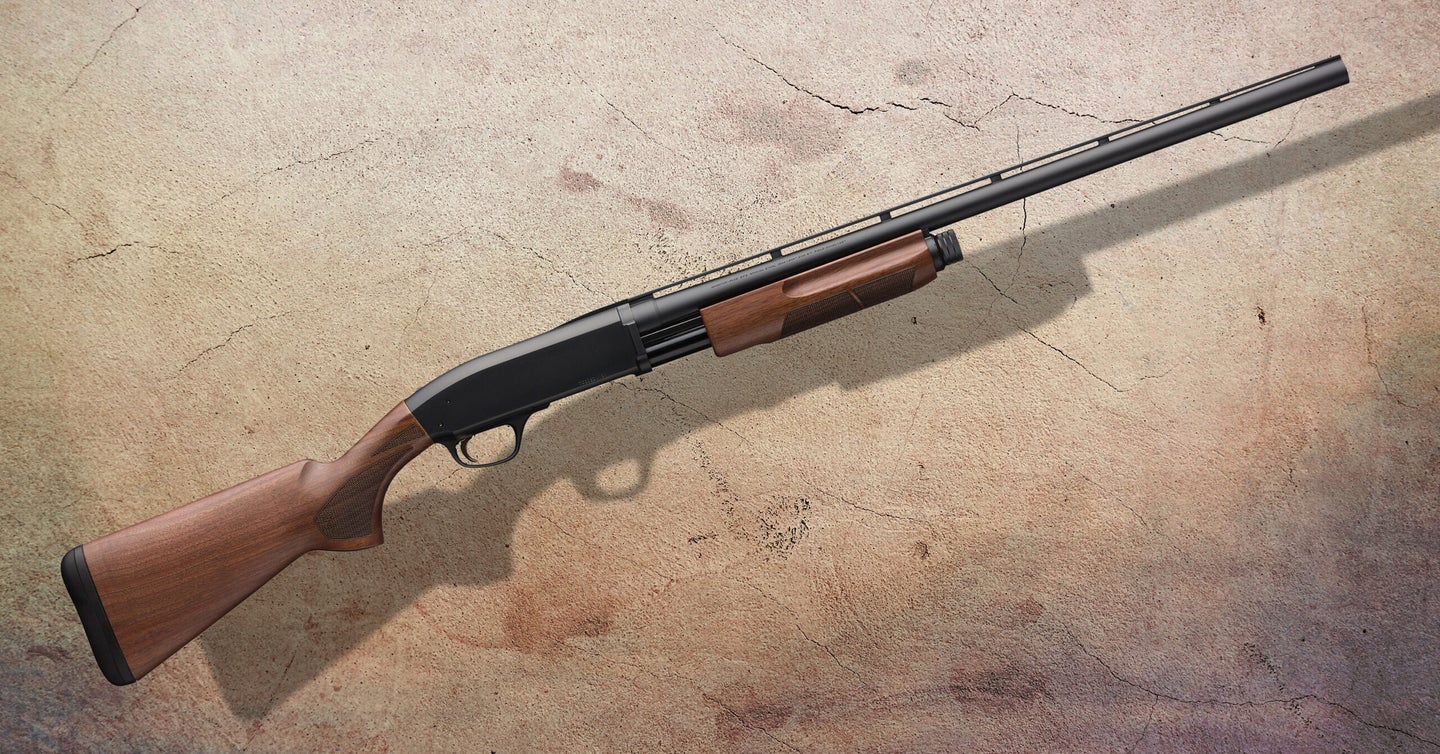 The Comeback of the .410, Plus Four Pump-Action Shotguns for Small Game

With the advancement of shotshell technology, the .410 has become a more deadly hunting shotgun, worthy of your gun closet

I received a New England Firearms .410 single shot for my eighth birthday. It was my first shotgun and it opened up a universe of hunting opportunities. Most importantly, it allowed me to be more than a spectator when I accompanied my dad afield. I was a hunter of rabbits, squirrels, and the occasional quail. Like so many other hunters, my .410 was the gun that forged the path to all of my future sporting pursuits.

Five years later, though, I wanted something more potent. My friends carried 12s and 20s, and my little .410 left me feeling undergunned. I purchased a Winchester 1300 20-gauge pump and the .410 was relegated to the back of the gun safe. I didn’t plan on ever using it again.

But, as it turns out, the .410 has returned to active duty in my lineup of shotguns. Modern loads—specifically TSS—have revived the .410, transforming my NEF single shot into an effective turkey gun. I carry a .410 shotgun as often as any gauge. It’s in my hands when I’m following a pack of beagles at full cry on the heels of a cottontail, and it’s my go-to squirrel gun, especially when I’m locating bushytails with a call (odds are I’ll have to shoot at a moving target and a shotgun is more adept at that than a .22 lr).

As much as I like my single-shot .410, a repeater is a more practical option for most hunting situations, and there’s nothing more American than a classic slide-action scattergun. Today’s .410 pumps are light, generate low recoil, and lethal in the hands of an experienced shooter. When I was a teenager, carrying a .410 was a sign of immaturity—the shotgun equivalent of wearing floaties in the swimming pool. Now when I see a hunter carrying a .410, I recognize an experienced hand who understands that the best shooters don’t need magnum 12-gauge loads so long as they pick their shots and possess the skill needed to make a .410 payload accurate on game. Here are the four best .410 gauge pump shotguns.

Tristar guns are modeled after Beretta’s line of Italian auto-loaders and break-action shotguns. They are well-made Turkish firearms, and the Cobra III Field Pump Walnut .410 is an excellent value at $415. The Cobra weighs in at just over five pounds with a 28-inch barrel and the gloss-finish walnut stock looks like it belongs on a gun that should cost a lot moire. Three chokes come standard, and the reliable slide-action design will hold up to plenty of spent rounds. It only weighs five pounds, and can handle 3-inch loads. The barrel is chrome-lined and there is a rubber recoil pad on the buttstock, so you should hardly feel a thing every time you pull the trigger.

My vote for the most under-appreciated shotgun in North America goes to the BPS. Sure, these guns cost a little more than the average pump (starting at $700 MSRP), but the styling and craftsmanship is commensurate with a gun in that price range, plus they last forever. Browning’s BPS Field .410 ($800) comes with a robust steel receiver and weighs a bit more than other .410s on this list at 7 pounds—not ideal for young upland hunters who have to walk long distances with the gun. However, these guns have virtually no recoil with .410 loads and follow-up shots are blisteringly quick. Like most Mossberg guns, the BPS features a tang-mounted safety which is ideal for turkey hunting if you have to shoot with your off hand. And because the safety is ambidextrous and the BPS has a straight stock, it’s a good fit for right- and left-handed shooters. The BPS has a 3-inch chamber, the barrel is 26 inches, and it comes with Browning Invector-Plus chokes (IC, M, F).

Mossberg knows pump guns, so it’s no surprise that the company’s catalog of .410 pumps is the longest of any shotgun maker. Mossberg’s flagship pump is the 500. It’s available with walnut or black synthetic stocks, and both perform dutifully. The company also offers the .410 Bantam, which includes removable stock spacers that allow the gun to grow as your son or daughter does. That means the same gun your kid carries during their formative years in the squirrel woods could be the same gun they use to kill gobblers as an adult—and in both instances the gun will fit them properly. Turkey hunters will love the Model 500 .410 Turkey ($549), which comes in Bottomland camo, with a tang safety of course, and an extended X-Full choke. The 500 Field comes with a fixed full choke, and weighs just over 6 pounds. It also has a 3-inch chamber and dual-bead sight.

The future of Remington guns is uncertain. The company was purchased out of bankruptcy and new owners—Roundhill Group LLC—have promised to bring back the 870. I certainly hope that’s the case. Remington’s failings over the years have had nothing to do with the 870’s design, and the light, lively Wingmaster .410 with a 25-inch barrel is a beautiful gun to behold. Plus, you can still find this gun new as well as on the used market. Just before the company was sold another new .410 was announced, an all-camo .410 turkey gun with a Tru-Glo top rail for mounting an optic. It also includes a super full choke tube, and the receiver is milled from solid steel, so you can expect a lifetime’s worth of durability from this gun.

The .410’s greatest asset is its versatility. It will shoot everything from 2½-inch loads (perfect for dispatching small pests like rats, starlings, and snakes) up to 3-inch magnums with 13/16 ounces of high-density shot for ducks, turkeys, and pheasants. If you’re of the mindset that a pump gun should double as a home defense weapon then you’re in luck with the .410 too, for there are a host of defensive options made popular by guns like the Taurus Judge. Federal Ammunition’s Custom Shop will also whip you up a batch of your favorite .410 loads so you can tailor your shotshells to the game you’re chasing.

Pump guns are the perfect platform to extoll the .410’s many virtues. We tend to think that pumps are considerably slower than semi-autos, but in truth that depends upon the capability of the shooter, the gun, and the load. A low-recoiling .410 pump in the hands of an experienced shooter cycles like lightning, and since you’re doing the brunt of the work to cycle the gun, odds are it will run without failure even if you’ve been a little lax on your cleaning detail. Pumps are also the most affordable repeaters, with a panache you can’t find in other guns.

The 12-gauge is still the standard-bearer and will be for the foreseeable future—you own one and so do all of your hunting buddies. But owning a .410 pump has its virtues. You just have to use it for the proper pursuits. If that appeals to you, then here are four .410 pumps that you’ll want to consider buying. Just beware: These guns can quickly become an obsession, and your gun safe may soon overflow with .410s.

The real reawakening for the .410, though, is the growing popularity of high-density shot materials like TSS and bismuth. While duck hunting Mississippi’s legendary Beaver Dam Lake, I got a lesson in what today’s .410 TSS ammunition can accomplish. Jared Lewis of Apex Ammunition was carrying a .410, and as the ducks dropped in through the cypress trees, Lewis put on a shooting clinic. Mallards where falling to the .410 at 30 and 40 yards, hitting the water stone-dead. Secretly, I had imagined the .410 would cripple more birds than it killed, but that wasn’t the case. When we headed out of the blind for our return trip to the lodge I wondered how Nash Buckingham, who exclusively carried his HE-Grade Super Fox 12-gauge double Bo Whoop, would have felt to know that in the decades following his death hunters would occupy his old stomping grounds carrying .410s.

From turkeys to squirrels a .410 shotgun is capable hunting gun with the right load. The best .410 pump shotguns are light, reliable, and affordable. When I was a growing up, a .410 was for kids, but not anymore. When I see a hunter carrying a .410, I recognize an experienced hand who understands that the best shooters don’t need magnum 12-gauge loads so long as they pick their shots and possess the skill needed to make a .410 payload accurate on game.  If you’re ready to take on the challenge of shooting and hunting with a .410 you can’t go wrong with the above options.