Shotgun Review: Remington’s 870 Express Is the Best Pump Gun For the Money

For the better part of a decade the Remington 870 Express was not the gun it once was. RemArms has changed that, restoring an American classic to its former glory 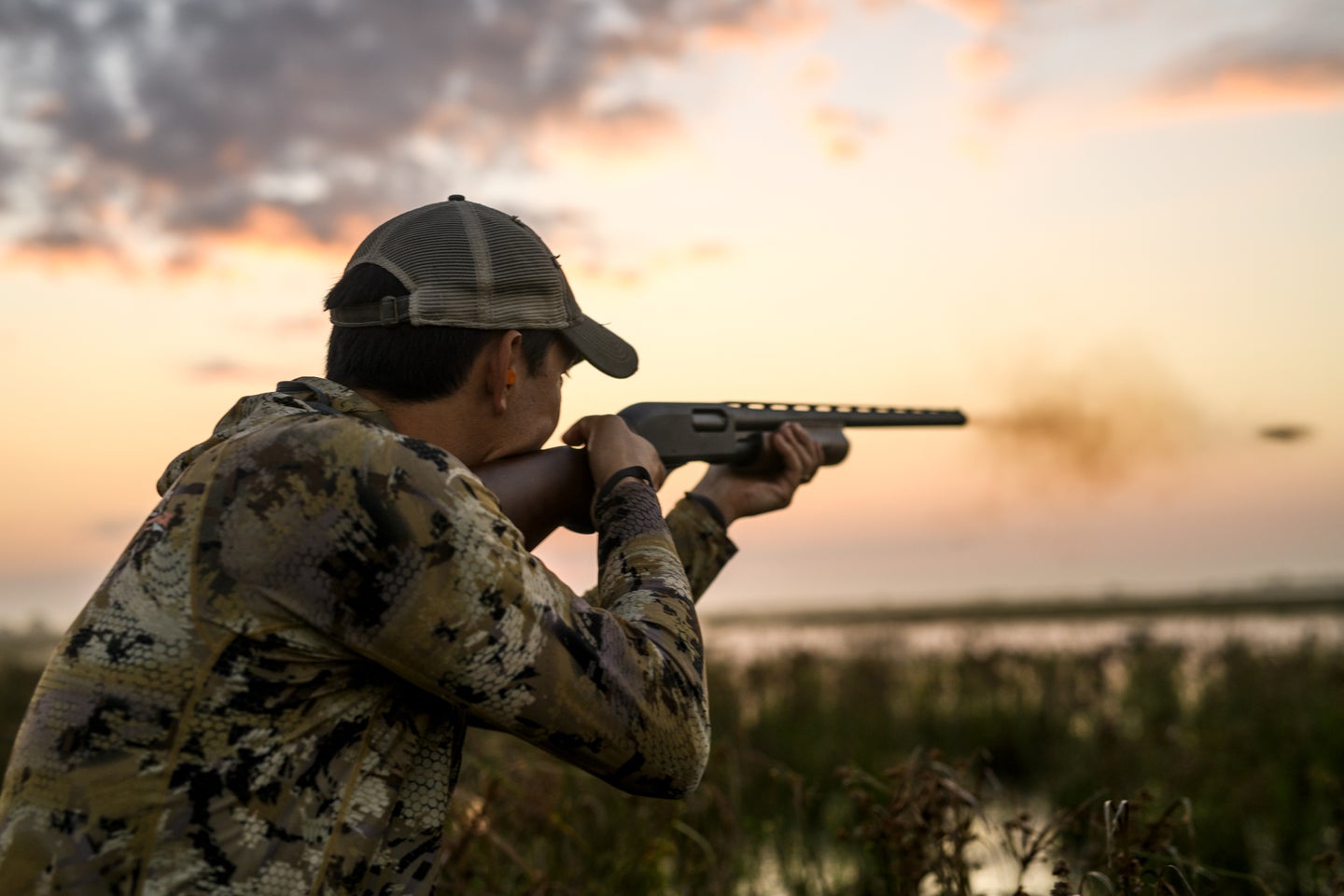 The U.S. military relied on the Remington 870 in the Vietnam War and again during conflicts in the Middle East. Police departments still use a tactical version of the 870 as do private citizens for their home-defense gun because it has proven to be a reliable firearm. But long before the 870 saw the battlefield or rode in a squad car, it was a duck hunter’s shotgun (and still is). And you could argue that the duck marsh was the first real testing ground for the famed pump-action. If a shotgun can stand up to the abuse duck hunters, who require more of their guns than just about anyone, can inflict on one year in and year out, it can make it through anything. And the Remington 870 Express has continued to perform for more than 70 years.

In 1987, Remington began making the 870 Express, a more affordable version of the Wingmaster, which was introduced in 1950. In all, Remington—which is now owned by RemArms—has manufactured 11 million 870s, making it the most successful shotgun in history.

Its superior functionality is one of the reasons why it won the best pump gun award in our review of the best ducking hunting shotguns, in which we put 17 auto-loaders and pumps to the test in Sept. 2021 at Pintail Hunting Club in Garwood, Texas. Here’s why the Remington 870 Express stands above the rest.

RemArms is manufacturing the Remington 870 Express in the same New York factory the previous regime built the iconic pump in. The gun that our team tested in Texas was one of the first “new” 870s to come off the assembly line. It was built with the same parts as the old 870s, but the receiver and inside of the chamber were both smooth, an improvement over many of the guns that were produced in the last decade.

One of the reasons those 870s failed was a lack of attention to detail. Many of the chambers were left with burrs that had not been smoothed out. Shotshells would catch on those and not properly eject. I know several hunters that also had an issue with the carrier not lifting the shotshell from the magazine into battery after the first round was fired. Our test gun functioned flawlessly. It cycled heavy 3-inch duck loads and lighter 1-ounce target loads without issue. The inside of the chamber was well manicured and there were no burrs on the outside of the receiver either.

Is This New Remington 870 Express Any Different Than the Old Express?

Aesthetically, this new Remington 870 Express looks like the old 870. It’s also being built with the same parts. The difference is in the return to quality. Early Express shotguns were made well. But about 10 years ago 870s began to have cycling issues, which is unacceptable for a pump gun because that’s why you buy it—pumps always shoot when you need them to.

An area where the new 870 was not as good as the early version of the gun was the finish. It’s not a marketed difference, but I’ve held and shot many Expresses and the older models were built slightly better. The stock and fore-end are more durable than the new model. For instance, I have a Magnum 870 Express, and when I put it side-by-side with the new synthetic model, the Magnum is definitely the better built gun.

As I said before, you buy a pump shotgun because they always work. And the 870 runs on dual-action steel bars that are almost impossible to destroy. I have seen some of them bend over the years and need replacing, but never witnessed a complete break, though I have heard of it happening.

We shot the test gun on speedy bluewing teal and five-stand. The travel of the fore-end is a short 3 inches (which is what you expect shooting a gun chambered for 3-inch shells). That makes it easy to cycle a second or third shell when you need a follow up shot on ducks or to break a double on clays. The fore-end also moves backward much easier when you fire a 1 1/8- or 1¼-ounce duck load, helping you work the action quickly. You don’t get the same benefit with 7/8- or 1-ounce target loads. The charge weights aren’t heavy enough.

Ideally, you should be able to shoot a pump gun almost as fast as an auto-loader. But, you can only do this if the pump has a short stroke and functions properly. The Remington 870 Express checks both those boxes. We did not experience any jams with the gun.

The only complaint I have in terms of operating the 870 is the obtrusive bolt-release. It’s an odd-looking, skinny steel claw that sticks out the left side of the receiver. It’s out of place, and could have been streamlined to fit the shape of the gun.

How the 870 Express Handled

Our test gun was the hardwood/steel model Express. It’s a well-balanced gun that’s slightly weighted forward, and it swung nicely. All of us were able to shoot it reasonably well on teal and clays.

There’s pressed checkering on the stock and fore-end, but not enough to give you a firm grip on the gun. It was okay for September in Texas, but in the cold and rain, putting some grip tape on the gun would be a good idea.

The hard rubber butt pad on the stock is good for mounting the gun securely to your shoulder, but it doesn’t do much to mitigate recoil. When you shoot a duck load through an 870 you’re going to feel it. Some of the recoil was tamed by the weight of the gun (7.6 pounds), but I have shot the lighter (around 7 pounds) synthetic version of this pump, and it is not enjoyable.

Also, the synthetic model has no real grip on the stock or fore-end. The plastic pieces around the pistol grip and fore-end are roughed up to so your hands can find them, but they won’t help you hold onto the shotgun.

The Remington 870 Express Is Versatile

Another reason you buy a pump, particularly the Remington 870, is because you can hunt different types of game with one. While the Express shines in the duck marsh, it’s also a viable upland gun. Remington also makes slug barrels for deer hunters, and shorter barrels for turkey or even grouse hunters. it’s also a great home-defense option.

But you only get one modified choke with the gun, which is a little ridiculous even for a $400 pump. A modified choke will cover just about any waterfowl hunt, but you need an improved cylinder and full choke for other shooting and hunting pursuits. Most affordable guns, even pumps, come with those three choke tubes.

For a Pump Shotgun, There’s Still No Better Value

The reason Remington has sold so many 870s is due to the fact that no other gun manufacturer has been able to match the quality and price point of this pump. Sure, there are better made pumps, like Browning’s BPS or Ithaca’s Model 37, but those guns cost hundreds more. And there are cheaper pumps too, but you won’t get the same durability from them as the 870. Mossberg’s 500 does come close to the Express, but has an MSRP of $60 more and doesn’t operate as smoothly as the 870.

There are some drawbacks to this Remington shotgun, like it’s heavy recoil. We also found some tooling marks inside the barrel, though that didn’t seem to negatively affect it on the pattern board. And the barrel and receiver of the new Remington 870 I own are already beginning to rust even though I’ve hardly shot it. But for $400 it’s unlikely you will find a new shotgun that will outperform (or outlast) the Express.

Read Next: The Remington Ammunition Comeback Is Just in Time

How the Remington 870 Express Patterned

Since we tested so many guns (17) in Texas, we picked one distance (35 yards) to pattern each gun from. The industry standard is 40 yards, but we wanted to showcase the patterns at a more realistic yardage for duck hunters. Plus, your average hunter should keep shooting distances inside 35 yards. Once you get out to 40 it takes more skill, and the likelihood of crippling birds goes up.

The Remington 870 patterned 60 percent above and 40 percent below point-of-aim, and slightly to the left. Its best pattern was 115 of 140 pellets (82 percent) inside the 30-inch circle. If a duck was decoying to the right of your shooting position, there is a chance it could slip through the pattern of this 870. But when a bird is in that vulnerable of a position, and you don’t hit it with three shots, it’s your own damn fault.

Final Thoughts on the Remington 870 Express

It’s good to see RemArms return the Remington 870 Express to its previous stature as one of the best hunting shotguns for the money. It was discouraging to watch such a great gun fall off the way the 870 did over the last 10 years, and it’s awesome that shooters—new and old—can feel confident in buying one again. There are certainly some things about this gun to dislike, but you will always have to make compromises when buying a budget firearm. The important thing to note is the Remington 870 Express will do what you require of it: shoot when you need it too. Which is ultimately what we all look for in a duck gun.