The Coolest Ducks Unlimited Dinner Guns of All Time 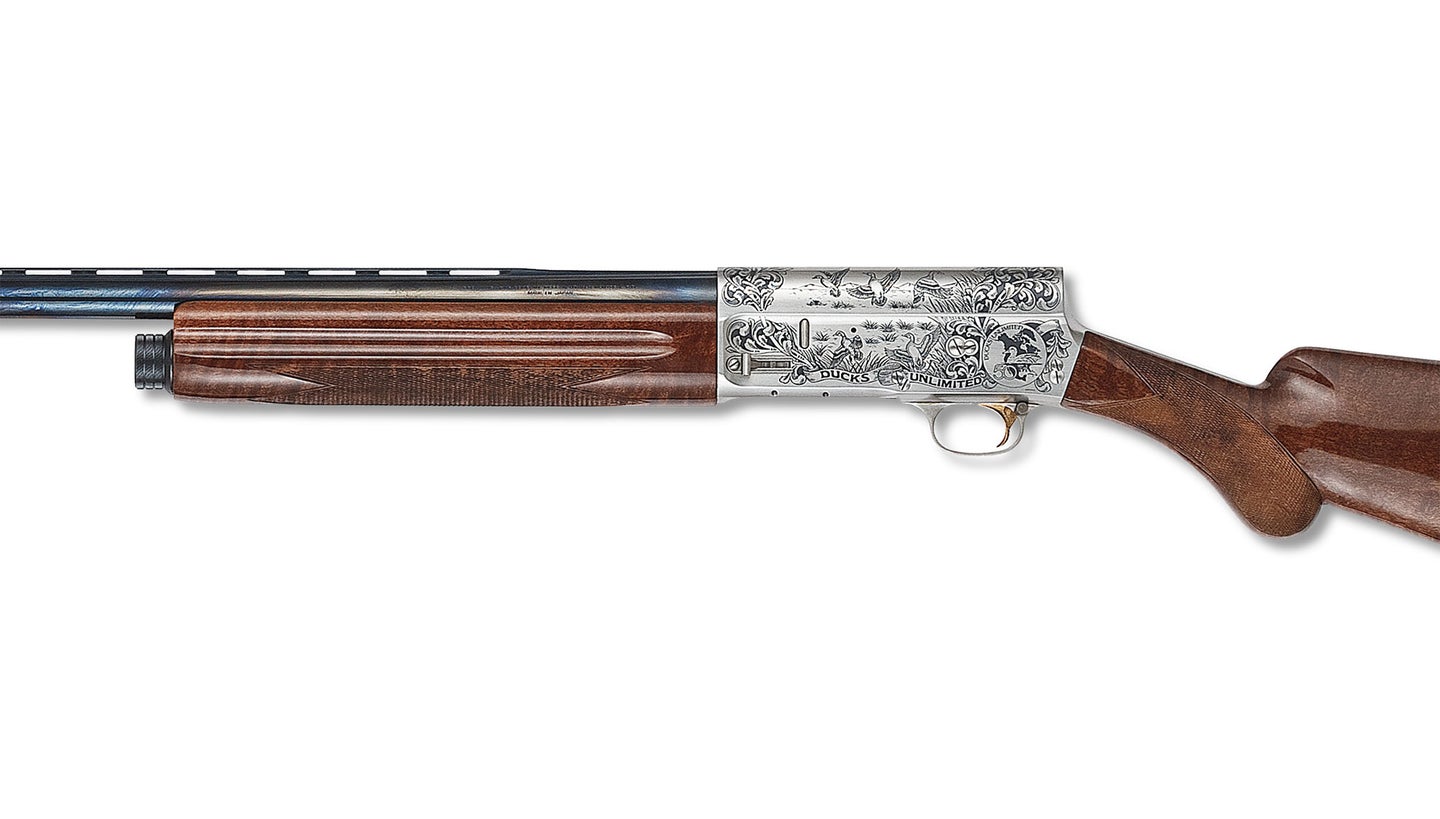 At a 1973 Ducks Unlimited banquet a custom Remington 1100 shotgun was auctioned to raise money to help fund sustainable duck habitat for North American waterfowl. That first 1100 started one of the most successful philanthropic efforts in DU history—the “Shotgun of the Year,” a program that continues today. Each year a gun manufacturer is selected to build a special run of shotguns specifically made for the DU dinners that take place across the country. And some of those dinner guns have become highly coveted.

A total of 140,023 DU dinner guns have been sold, every penny made going to waterfowl and wetlands conservation. The only way to get a new model is to buy one at a DU event or online auction, though older version like these will crop up on the used market. Also, you can check out DU’s Into the Vault online auction that runs from November to early December every year to see if one of these classics comes up for sale.

DU never kept any of the dinner guns when the program started in 1973. But as time passed, the realization set in that they should have, and staff began looking for a complete set. For years, every lead came to a dead end until Tony Palermo of Sulphur, Louisiana, was found. He not only had one complete collection of DU dinner guns, but three. Palermo donated one of them, and the guns are on display at DU’s national headquarters in Memphis.

By the early 1970s, DU had completed 1100 wetlands conservation projects in Canada. Those projects helped waterfowl populations through tough times, including the early 1960s when drought decimated populations, shortening season lengths and limiting daily bags. By 1973, the birds had rebounded. So, to commemorate the success in Canada, DU selected the 1100—the same number of projects completed on the prairie. The Remington 1100 Magnum—a 2 ¾-inch shotgun with a 30-inch full-choke barrel—was one of the most popular auto-loaders of the era, alongside the Browning Auto-5. It was built to function in the harsh elements duck hunters often find themselves suffering through, something that had not been done with a gas-operated semi-auto to that point. The 1100 was a darling amongst clay shooters as well and offered in every gauge from 12 down to .410-bore.

DU went with another duck hunting favorite in 1975, the Winchester’s Model 12. The pump gun was deemed “the perfect repeater,” and all you needed was to swing it on a crossing mallard once to know why—it was a well-engineered smoothbore that fit scores of different shooters. This 12-gauge, 2¾-inch Winchester had a 30-inch full-choke barrel with high-grade walnut furniture and a signature red Winchester recoil pad. The DU gun was not overly ornamental, fitting for a shotgun built to take a beating. Tastefully engraved, the Model 12 sports a distinctive bronze receiver medallion, and the DU crest is attached to the pistol grip. Winchester debuted the M12 in 20-gauge in 1912, before adding 12- and 16-gauge two years later. There was also a 28-gauge variant and the .410 became a separate line called the Model 42.

In 1987, DU celebrated its 50th anniversary with the most famous long-recoil shotgun in American history—John Browning’s timeless Auto-5. The gun is truly stunning, including an elaborately engraved silver receiver paired with high-grade walnut stock and forearm. The words “Fiftieth Year” are engraved in banners across the bolt side of the receiver, a graceful Canada goose overlooking the scene. The 2¾-inch chamber was chosen over the 3-inch magnum version, but this dinner gun was meant for collecting, not hunting. The Miroku factories in Japan built 5,000 of these Auto-5s, each of which had fixed modified chokes. Rock Island Auction sold one of the 50th anniversary humpbacks for almost $3,000 in April of 2022.

It took more than 30 years for DU to add a break-action to the Shotgun of the Year collection. Beretta’s 686 White Onyx, a popular over/under design, was selected in 12-gauge. In 2008 and 2009 the 20- and 28-gauge White Onyx models followed, creating a coveted three-gun collector’s set. Each shotgun sports 28-inch barrels with Beretta’s Mobil choke system. The 12 and 20 have 3-inch chambers (28 has 2¾-inch) with polished nickel receivers set off by inlaid gold flying ducks. In 2019, the 12-gauge Super Black Eagle III began the next set of DU dinner guns, followed by the matching 20-gauge in 2022, and the upcoming 28-gauge for 2023.

Browning scored another milestone gun with the 3-inch, 12-gauge Maxus for DU’s 75th Anniversary. Browning completely changed the exterior of the gun a few years ago, debuting the Maxus II, but the original is still a solid duck auto-loader. Gas-operated, the Maxus features a Grade III gloss walnut stock and fore-end. Like the 1987 A-5, this Browning has a beautifully engraved silver receiver with gold inlay. It also has a high polish 28-inch barrel that comes with three Invector-Plus choke tubes. The Maxus fore-end was different from any other auto-loader because it was engineered with the Speed-Lok system. That allowed shooters to remove the forearm by pressing a button and lifting a lever, much like you would when removing the barrels from an over/under or side-by-side. It was touted as being much simpler (and faster) than unscrewing a fore-end cap, but also meant an extension magazine couldn’t be used. That’s not an issue with the Maxus II.