The top calibers and bullets for pronghorn antelope hunting 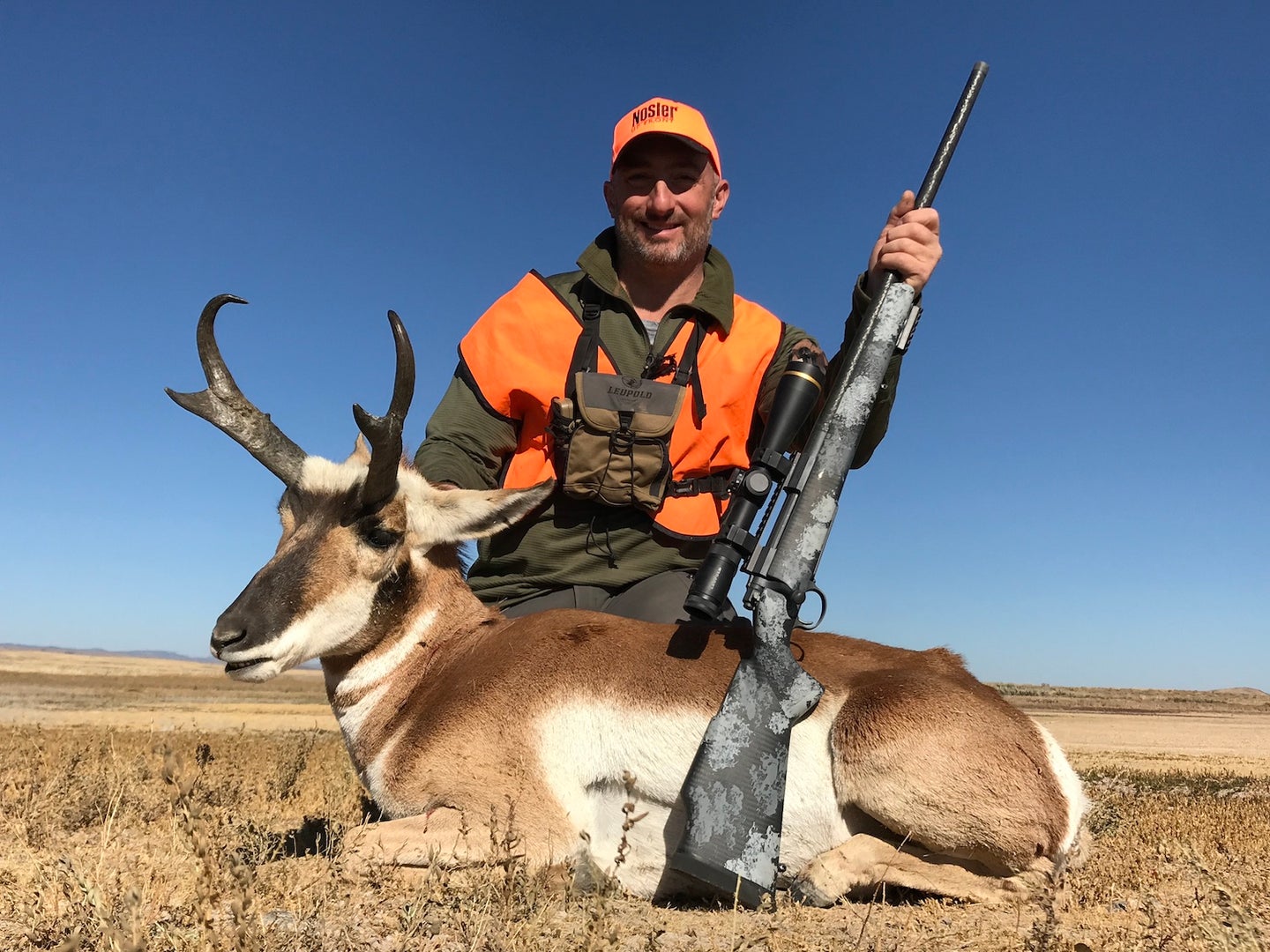 Antelope have a preference for wide-open country, so shooting a cartridge that can reach out and defeat the wind is a good idea. John B. Snow
SHARE

Pronghorn antelope are unique among North America’s game animals. They are neither antelope nor goats, as Lewis and Clark described them, but occupy their own singular branch on the tree of life. Their closest living relatives are the okapi and giraffe. They are the second fastest land animal on earth and are blessed with the most efficient cardiovascular system of any mammal. They are ancient creatures that outlasted whatever predators had evolved to chase them and are one of nature’s true marvels. And when properly cared for and dressed, antelope is among the most delicious game to eat. So, you’ll forgive me if I insist that they shouldn’t be hunted with a run-of-the-mill deer rifle. Instead, they deserve to be pursued with cartridges as interesting as they are. That said, here are the best antelope cartridges out there.

When I approached Hornady about doing a wildcat in 2007, right after the 6.5 Creedmoor was introduced, we agreed that the brand-new 6.5 would be an excellent parent for a 6mm version. I envisioned it as an advanced round for target shooting at 1,000 yards and a capable cartridge for predators and small- to medium-sized game like deer and antelope.

Honestly, none of us saw the 6mm Creedmoor taking off the way it did, but its advantages were too many to ignore—especially with the rise of the Precision Rifle Series, where it excelled.

I’ve been using the 6 Creed on antelope since the beginning, and I don’t think there’s a better cartridge out there in terms of inherent accuracy and downrange ballistics.

There are plenty of bullets to choose from. I’ve had tremendous success shooting 105-grain Berger Hybrids at 2917 fps. That’s a relatively mild load that is stupid accurate and does a good job resisting the wind. Any of the heavy-for-caliber bullets weighing 103 grains or more will work great on pronghorns, and you can certainly drive the bullets faster than my load and have great results.

For a cutting-edge round that’s built along the principals of modern cartridge design, the 6mm Creedmoor can’t be beat.

The .257 Roberts was hot stuff when it was conceived by Ned Roberts in the 1920s. It’s a necked-down version of the original high-power performance cartridge, the 7x57mm Mauser and was offered by Remington as a commercial round in 1934. For the cartridges of that era, it struck an excellent balance between low recoil and flat trajectory.

One of my favorite combos is the 110-grain Accubond loaded with RL-19 to about 2825 fps. It’s super accurate and that bullet delivers flawless performance. That’s been my son’s go-to antelope cartridge for years. A couple years back I watched him stalk up a shallow drainage ditch in an alfalfa field to within 300 yards of a small herd of antelope. He popped out of the ditch, dropped into a kneeling position and promptly knocked over a nice buck. I couldn’t say I was surprised—that’s exactly what the Bob does best.

The quarter bores are in many respects the ideal bullet diameter for antelope, and there’s no cartridge that evokes the wide-open West like the .257 Weatherby. So it’s only natural that it earned a spot among the best antelope cartridges. That’s also my backhanded way of apologizing for not including the .25/06 on this list. Though it is a worthy round, we can only have so many .25s here, and the middle child (in terms of muzzle velocity) is the one that’s getting overlooked.

I spent a lot of time when I was young staring at trajectory tables, first, because I was fascinated by ballistics and, second, because I couldn’t actually afford a rifle. Like countless other youngsters who dreamed about hunting the West my eyes were drawn time and time again to the .257 Weatherby, which seemed to possess a magically flat trajectory.

No bullet better demonstrates that than the 80-grain Barnes TTSX. Blazing from the muzzle at 3840 fps and sighted just 2 inches high at 100, the bullet drops only 17.4 inches at 500 yards while still retaining 1123 ft-lb of energy. How can that not stir the imagination of any aspiring Western hunter?

The truth is, that wouldn’t be my first choice for antelope—though I’m sure that bullet has accounted for many pronghorns. Rather, I’d go with something in the 100- to 115-grain class. Barnes makes a TTSX that’s 100 grains and the aforementioned 110-grain Accubond and 115-grain Ballistic Tip will get the job done as well. Muzzle velocities will range from 3400 to 3600 fps for these projectiles and the trajectories will be flat enough for all but the most persnickety of shooters.

The 6.5-284 Norma has an air of mystery about it—mostly because the cartridge has had a hard time figuring out what it wants to be when it grows up. It’s unclear who first decided to tinker with the .284 Win. and neck it down to 6.5mm (.264 in.) but it wasn’t long after the .284 was introduced in 1963 that wildcatters started playing with it.

The wildcat 6.5-284 Winchester (as it was first called) began as a hunting round but at some point shooters discovered its excellent capabilities as a long-range target cartridge. For many years it was the go-to round for 1,000-yard competition in benchrest and had been a dominant cartridge in several long-range disciplines such as F-Class and NRA High Power.

Norma commercialized the case in 1999, which was good timing on their part given the explosive growth in long-range shooting and hunting since then.

The 6.5-284 has a devoted fan base, but it will never attain the kind of popularity achieved by the 6.5 Creedmoor or the even newer 6.5 PRC. That’s okay, because it is that exclusivity that landed it on this list of the best antelope cartridges. While those other 6.5s are serviceable, they come off as a bit ordinary when compared to the 6.5-284.

The most distinctive feature on the 6.5-284 Norma is its use of a rebated rim (which is shared by the parent cartridge). The idea is that one can use a standard, smaller sized bolt face while maximizing case capacity for better performance. The two shortcomings of this concept are that the brass is more expensive to make, since turning down the case rim requires an extra machining operation, and it can be more difficult for rebated-rim cartridges to feed reliably.

Prior to the .284 Winchester, the best-known rebated rim cartridge was probably the .425 Westley-Richards. Don’t feel bad if you’re not familiar with it. Its peer group was even more obscure. Among them were the 11.2×60 Schuler (the first rebated-rim cartridge), 8.2×52 Austrian, 10.75×63 Mauser, 575 Miller & Greiss Magnum (perhaps the stupidest cartridge in history) and 9.3×60 Peterlongo—household names all.

Today we see a smattering of rebated-rim designs in some of the short-mags and some of the big-bore AR rounds—.450 Bushmaster, .458 SoCom and .50 Beowulf. But the 6.5-284 Norma is the original of the modern crop of long-range big-game cartridges, so if you’re looking for an antelope round that stands apart from the herd, this one’s your choice.

The .243 Winchester is the opposite of exotic, but there’s no way to leave it off the list of the best antelope cartridges since it has accounted for more pronghorns than all the other cartridges here combined.

Even though it is one of the most common (and effective) rounds out there, it does have an interesting and distinctive pedigree. The .243 Winchester is the .308 Winchester necked down to 6mm. The champion of this was Field & Stream shooting editor Warren Page, who had been fooling around with 6mm wildcats since the mid 1940s. He and his cohorts were looking to develop a dual-purpose round that would deliver top-notch accuracy in the brand-new sport of benchrest shooting and that would work well on game animals.  After the .308 Winchester was introduced in 1952, Page jumped on it like a proverbial duck on a June bug and his wildcat gained momentum so quickly that in 1955 Winchester introduced it as a factory round. The rest, as they say, is history.

Read Next: The 6 GT Is a New Top Cartridge in the Precision Rifle World

Varmint shooters shake with excitement when topping the .243 Win. with lighter bullets that can be launched at blistering speeds, such as Sierra’s 70-grain Blitzking or Berger’s 68-grain flat base target bullet. But for antelope, the best bullets are in the 90- to 100-grain range. The Nosler 95-grain ballistic tip is tough to beat and can be loaded to speeds over 3100 fps with the right powders.

But there’s no need to handload the .243 Win. since factory ammo—at least during normal times—comes in so many variations that you shoot a different load each season and never repeat yourself over the course of a lifetime.