13 of the Best Wildcat Centerfire Rifle Cartridges Ever Made 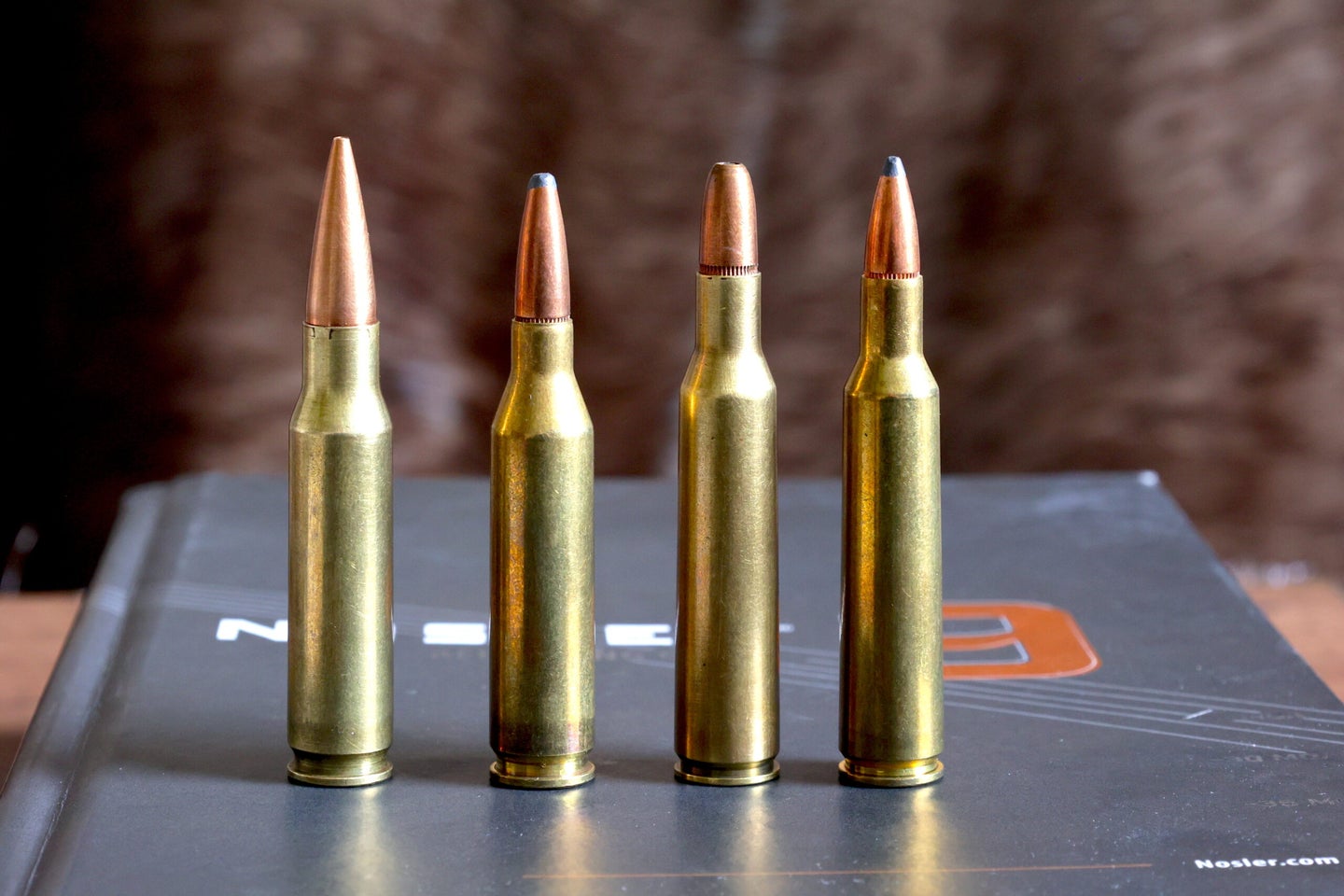 The .243 Win. (second from the left) was once a wildcat. Warren Page teamed with Fred Huntington to shrink the neck of the experimental T-65 project cartridge from .308 to .243. Ron Spomer
SHARE

Wildcat centerfire rifle cartridges are custom cartridges fired in rifles with matching, custom chambers. They are not loaded or sold by commercial ammo manufacturers and cannot safely be fired, if fired at all, in factory rifles. The “wildcatters” who concoct them usually reshape an existing brass case to achieve performance factory cartridges can’t. Some pan out, others don’t. But dozens and dozens have been created over the years and more likely will be. In this article I am going to investigate some of the more famous, most successful, and even most ridiculous wildcat loads. Many proved to be so good that they eventually were adopted as standard, factory rounds.

Shortly after Savage impressed velocity-loving shooters with the 3,000 fps .250-3000 Savage cartridge, a light bulb must have begun glowing in a wildcatter’s head. “What would happen if I put a .22 bullet on that case?”

The wildcat .22 became so popular that Browning took the unprecedented step of chambering its rifles for the .22 Varminter wildcat. But this didn’t happen until 1963, some 25 years after the wildcat first appeared. Browning’s bold move must have inspired Remington because two years later it made Gebby’s screaming .22 a SAAMI-approved, factory cartridge. They christened it the .22-250 Remington. To this day it remains the most popular high velocity, long range .22-caliber in the world. Neither the faster .220 Swift or .223 WSSM has dented its popularity.

It wouldn’t surprise me if this latest high velocity .22 wildcat became a legitimate factory offering before I finish typing this article. Hornady is already selling .22 Creedmoor cases and a few boutique ammo makers are loading it.

As you can guess, this wildcat was made by necking the 6.5 Creedmoor and later the 6mm Creedmoor to grip .224-inch bullets. Simple. The result is a case with a bit more powder capacity than the .22-250 Remington for a velocity gain of about 150 fps. But that’s not the main selling point. Heavy bullets are. Like most modern cartridges with minimum taper and 30-degree shoulders, the .22 Creedmoor is set up with long throats and fast twist barrels to handle bullets as heavy as 95 grains, pushing them as fast as 3,000 fps. This puts it in the .243 Winchester class for punch.

Plenty of Hornet shooters saw even more potential in that little, slope-shouldered, rimmed case and modified to reach it. The best result was the K-Hornet by Lysle Kilbourn. He took taper out of the case, pushed the start of the shoulder forward, sharpened the slope to 40 degrees and increased velocity by about 10 percent. A nearly modern look were it not for the rim. Winchester made the original Hornet from a modified .22 Winchester Center Fire black-powder case, but wildcatter Grosvenor Wotkyns is credited with designing it. I guess this was one case in which a major player jumped on a wildcat idea long before it became popular. The K-Hornet pushes 45-grain bullets 2,800 fps.

One of the most popular wildcats of all time was itself derived from another wildcat, the .25-20 Single Shot of 1886. Single-shot target shooter Francis Rabbeth converted one of the long .32-caliber centerfire cases of the era to shoot a .25-caliber bullet. Around 1934 Hervey (not Harvey) Lovell, necked it down to .22-caliber to make the .22 Lovell. Harvey Donaldson a few years later “blew out” the case to further increase capacity to make the R-2 Lovell (second reamer for making the barrel chamber). This version drove 50-grain bullets about 3,050 fps and became so popular that a few major players like Griffin & Howe sold brass and, some say, loaded ammo in R-2 Lovell. WWII reportedly short-circuited plans to legitimize the round, and after the war Mike Walker’s .222 Remington flung 50-grain bullets 3,140 fps, ending any need for harder-to-find wildcats like R-2 Lovell.

If titles matter the .219 Donaldson Wasp wins the cool label. Wildcatter Harvey Donaldson grabbed Winchester’s new 219 Zipper cartridge of 1937 and began reshaping it to optimize performance with spire point bullets in single shot rifles. The 219 Zippers shot flat-nosed bullets because Winchester designed them for their new M64 lever-action, tubular magazine rifle. Not long-range friendly. Of course, the cases were rimmed because they sprang from the 30-30. Not ideal for vertical-stack magazines, but perfect for single shots, especially falling block single shots. By pushing the shoulder forward and sloping it at a 30-degree angle, Donaldson increased powder capacity enough to reach muzzle velocities approaching 3,600 fps with 50-grain bullets. Accuracy was so good that he and others shooting the Wasp won many benchrest competitions. The 222 Remington of 1950 is credited with taking the sting out of the Wasp, likely preventing it from becoming a commercial cartridge.

A few wildcats came on scene before the parent cartridge even hit the streets. During the development of the .308 Winchester/7.62 NATO in the late 1940s and early 1950s, Field & Stream’s shooting editor Warren Page teamed with Fred Huntington to shrink the neck of the experimental T-65 project cartridge from .308 to .243. Their original sported a 30-degree shoulder, but when Winchester took it mainstream, they stuck with the gentler 20-degree shoulder of what had by then been introduced as the .308 Winchester. Page similarly experimented with the .257 Roberts, necking it to .243. Remington grabbed this one as the .244 Remington, aka 6mm Remington. Both were the first successful commercial .24 calibers and to this day the .243 Winchester remains the most popular .243 in the world.

This was another early wildcat created soon after the .30-06 case came on the scene in 1906. Gunsmith Adolph Niedner formed it in the early 1920s and called it the .25 High Power Special, but everyone else referred to it as the .25 Niedner — until Remington registered it with SAAMI as the .25-06 in 1969. Here was yet another wildcat long in the tooth before a major player had the sense to legitimize it.

Niedner seemed to view his .25-caliber as a varmint cartridge, driving an 87-grain bullet 3,200 fps. The case had more potential than that, but powders of the day weren’t slow-burning enough to wring it out. Nonetheless, the .25 Niedner hung around long enough for technology to catch up, so Remington finally adopted it. Today the .25-06 remains our second fastest .25-caliber behind the .257 Wby. Mag., but it suffers from inattention. If fitted to a fast twist barrel and fed handloads topped with 130- to 135-grain, high B.C. bullets, it becomes a spectacular long range tool. As it has stood for nearly a century, however, it’s still the quintessential pronghorn cartridge.

A wildcatter in Idaho back in the mid-20th century created a line of wildcats from .25- to .30-caliber based on the .30-06 case. Rocky Gibbs took most of the taper out of the cases, pushed the shoulder forward, sharpened it to 35-degrees, and necked it to caliber. Most innovative was his “front ignition primer” via a flash tube extender that delivered the flame toward the front of the powder column, ostensibly for more efficient burning. Mr. Gibbs advertised his 30 Gibbs as the “world’s most powerful .30-06, driving 180-grain bullets as fast as 3,100 fps. Independent tests have shown that, when loaded to equal pressures, the Gibbs added just 104 fps to the velocity of the .30-06. Mr. Gibbs, however, touted his cartridge design as contributing to minimal bolt thrust, so traditional indications of excessive pressure, such as a sticky bolt lift, weren’t evident. His cases were sold and loaded without the bothersome internal flash extender tube, too. Gibbs claimed 3,175 fps for his .270 version spitting a 150-grain bullet.

This wildcat represents the pragmatic side of wildcatting. When soldiers returned from the World Wars with liberated M98 German Mausers chambered in 8mm Mauser, they had the chambers reamed to the longer 30-06. Then all they had to do was neck .30-06 cases to take a .323-inch bullet. The 8mm-06 would drive 150-grain bullets 3,025, elk-crushing 250-grains as much as 2,380 fps.

After WWII gun writer Elmer Keith and friends foreshadowed the best elk cartridge Winchester ever developed. What they did was neck the .300 H&H Magnum to grip Fred Barnes’ .333-inch bullets, then fire formed in a custom chamber with 40-degree shoulder. Winchester must have liked the basic idea because in 1958 they shortened the .300 H&H case to fit .30-06-length actions, topped it with the more common .338-inch bullets, and the 338 Winchester Magnum took over.

Steve Herrett of handgunning fame created a wildcat to fit a specific firearm and use, this one the T/C Contender pistol for hunting deer-sized game. Herrett and gun writer Bob Milek shortened the .30-30 case and sharpened the shoulder for optimal performance in short barrels. Amazingly, velocities with 150-grain bullets come within 275 fps or so of the .30-30 fired in a 20-inch barrel.

Modern gun writer Bryce Towsley, an advocate of “use enough gun and then some,” saw a hole in the Remington Ultra Magnum line—.35 caliber. He necked up the .300 RUM, popped on a 250-grain bullet and hit 2,960 fps to generate more than 4,800 foot-pounds muzzle energy. This is performance significantly superior to that of the other famous .35-caliber wildcat, Townsend Whelen’s and James Howe’s .30-06 necked up. It was legitimized as the .35 Whelen by Remington in 1987.

Read Next: Fastest .30-Caliber Rifle Cartridge in the World: The .30-378 Weatherby Magnum

Last but certainly not least, we have an example of wildcatters laughing at themselves over the ridiculous lengths to which they’ll go. Back in the 1960s famed gunsmith P.O. Ackley built an insanely overbored .22-caliber by necking down the massive .378 Weatherby Magnum case and giving it a 40-degree shoulder. It burned 105 grains of Hodgdon 570 powder to blow a 50-grain bullet 4,600 fps from the muzzle. I suspect barrel life was rather short.