One cartridge to hunt every big-game species in the West? Yes, it is possible 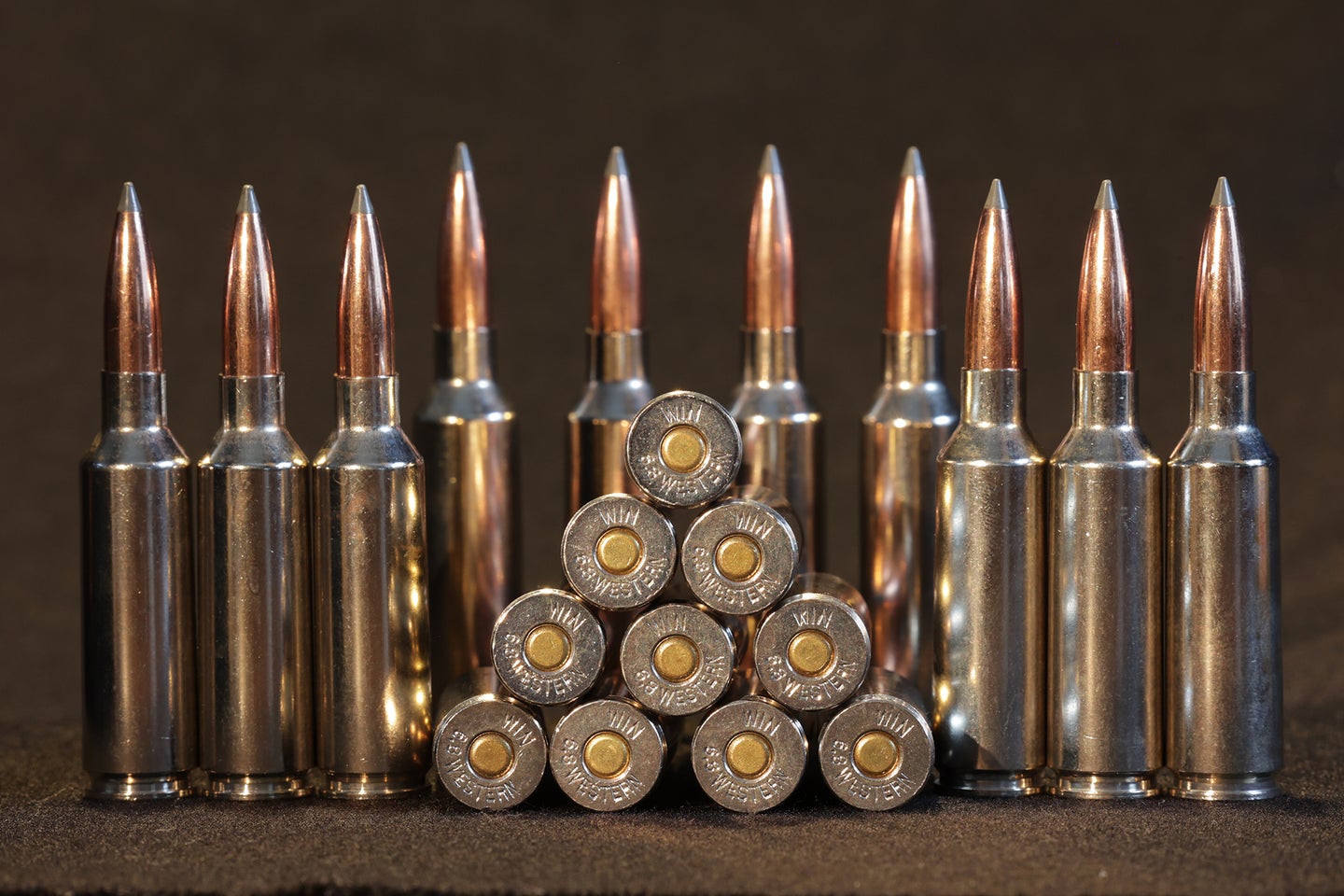 The new 6.8 Western sits at the top of the heap for big game cartridges. Ron Spomer
SHARE

Yes, there is a perfect all-round cartridge for western hunting. That’s not the problem. The problem is discovering it. Ask a dozen successful western hunters of broad experience and you could get 12 different answers.

As one of those western hunters with 50 year’s experience from the High Plains of Texas to the high slopes of the Brooks Range in Alaska, I could give you my top pick, but that’s akin to giving a person enough fish for a day. I’d rather give you the knowledge and tools to catch your fish — or in this case deer, elk, moose, sheep, goats, caribou, pronghorns and bear — everyday. For a lifetime.

So, let’s do this. I’ll outline my process for selecting what I consider the ideal cartridge while leaving you to modify it based on your own thinking, your own style of hunting. You might want to sacrifice rifle weight for recoil reduction. You might wish to forego the flattest trajectory for better wind resistance or trade speed for more bullet mass or momentum. Good. Have at it! It’s your rifle. But consider the points I make, even if you consider them to be wrong. The objective is to compare ballistic realities rather than choose a cartridge based on misconceptions, myths, and anecdotes.

Let’s begin with an honest assessment of what we’ll hunt — all western big game from pronghorns to moose. Brown bears might be a bridge too far, but with the right bullets and good shot placement, our deer/elk cartridge could handle them. Nevertheless, let’s focus on cartridges suitable for moose on down.

Something else to consider is frequency of use. Most of us will hunt mule deer or whitetails every year, elk and pronghorn if we can, then hope to draw one or more of those increasingly rare sheep, goat, and moose tags a few times in our life (if we’re lucky). Caribou fall between mule deer and elk and are easy. Coyotes are an increasingly popular game animal, too, so we won’t leave them out of our calculations.

To gain that .30-378 advantage, however, you’ll be absorbing some 40 foot-pounds of recoil in a 10-pound rifle. I’ve yet to meet a serious sheep or goat hunter who enjoyed hauling a 10-pound rifle up and down the Alaska Range for two weeks straight, let alone taking a 40 f-p belt in the chops when he or she finally got a shot.

Obviously, we’re needing balance and compromise here. To arrive at that, it’s important to clear up some fantasies about bullets and killing power. The first is knockdown power. Searching for the cartridge/bullet big enough to slam every whitetail to the ground with a boiler room chest shot is quixotic at best. Newton figured out 330 years ago that every action has an opposite and equal reaction. If the shot doesn’t knock you over, how can it knock over a similarly heavy deer? It can’t.

For me this Newtonian law is a relief. I don’t have to tolerate massive recoil to cleanly kill my game. And the numerous deer, elk, sheep, bears, and moose I’ve taken with “average” 26- through 30 calibers back me up. Tissue destruction, hemorrhaging, and central nervous system strikes are what kill game. I’m not alone in these experiences. Western hunters from Jack O’Connor to your uncle Jim have cleanly and routinely brought home venison with .270 Winchester-class cartridges. A famous Alaska Master Guide informed me his brown bear clients kill as cleanly with .30-06-class cartridges and the right bullets in the right place as they do with massive magnums they’re afraid to shoot. Flinching matters! And who wants to deer hunt every year with a .375 H&H Magnum or .458 Winchester Magnum?

While on this topic we must consider caliber. Bullet diameter matters, but if the 0.044” diameter difference between a 150-grain .308 bullet and a 150-grain .264 bullet changes terminal performance, I’ve been hard pressed to see it. When bullets strike, they expand, tumble, break up and otherwise rearrange themselves to such a degree that it hardly seems to matter if they started out a smidge wider or narrower. In my experience, mass, bullet construction, and placement matter more than caliber. That said, it never hurts to err on the side of more and bigger. However, if that leads to flinching, you’re better off with a smaller option you can shoot precisely. Placement first, bullet construction second, power last. History has shown that bullets from 140- to 200-grains in calibers from 26 through 30 launched at 2,800 fps or faster do the job. My personal experiences with 120- to 180-grain bullets in mid-powered cartridges from 6.5-285 Norma through 300 Win. Mag. reinforce that history. So, we’ll shop 26- through 30-calibers.

We’ll simultaneously consider long-range performance and bullet stability. I don’t advocate routine long-range shooting at big game, but you don’t have to shoot much beyond 300 yards to appreciate today’s popular, long, heavy-for-caliber, high B.C. bullets. Not only do they minimize wind deflection, but they retain more energy at all ranges. A high B.C. bullet in a smaller caliber can and often does deliver more energy beyond 300 yards than heavier bullets in larger calibers. Don’t assume “magnum” automatically means harder hitting or flatter shooting. Study ballistic tables. Yes, larger calibers can also shoot high B.C. bullets at high muzzle velocities, but at the cost of increased recoil and rifle weight. If a 165-grain bullet in a smaller caliber can shoot as flat and retain as much energy as a 200-grain in a larger caliber, then why not save yourself a little punishment.

While I’ve handily taken several mature bull moose and elk with 26- through 30-caliber bullets from 120- to 180-grains, there’s a new twist on what I was slinging 30, 20, and even 10 years ago: long, high B.C., wind resistant bullets. These are more than just the latest craze. High B.C. bullets have highly desirable attributes. Foremost is air drag resistance. Wind is a challenge out West. It’s hard to judge accurately. Bullets that minimize its effects are valuable. They can make the difference between a lung shot and gut shot.

High B.C. bullets also retain more energy at all distances. They are simply more efficient. And this is why so many shooters and hunters are fascinated by new, fast-twist cartridges. The 6.5 Creedmoor started it (never mind that the 6.5×55 Swede had done it 100-plus years earlier.) But the Creedmoor isn’t what any .300 magnum enthusiast considers the western big game ideal. I agree.

Before you Creedmoor lovers put me out like a campfire, know that I own, shoot, and love 6.5 Creedmoors. I’ve seen what they can do to elk and moose. But there are better options with equally high B.C. bullets, flatter trajectories, and greater retained energies. So, let’s keep shopping.

Now, if I were mainly hunting elk and moose, I’d go with a 30. But I know I’m going to be targeting mule deer, whitetails, pronghorn, and coyotes much more often. So, I’m compromising down. But not as far as the 6.5mms. Despite the impressive speed and power of the likes of the 264 Win. Mag., 6.5 PRC, 26 Nosler and 65.5-300 Wby. Mag., I’m compromising closer to the middle. That means .277 or .284 bullets. Both have served me well on moose and elk as well as all the rest. The advantage in the 7mms are bullets from about 120-grains to 185-grains (handloading generally required at either extreme.) I’ve taken most of my game with 140s and 150s, but to get the delightful B.C.s we’re hoping for, we need to jump to 168-grains and nudge our way up, knowing that more bullet weight means less velocity, thus more drop with any given case/powder capacity. Today’s highest B.C. .284 bullets are scoring in the mid .6s with a very few cracking the low .7s. Those require rifling twist of 1:9 at the slowest. Fortunately, most 7mms from the old 7×57 Mauser on up wear 1:9 twist barrels.

These higher 7mm bullet weights also increase Sectional Density, an indicator of penetration potential, something worth having for elk, moose and bears. A 175-gr. .284 bullet scores an SD ranking of .310 regardless of its shape, but a sleek, aerodynamic shape in any weight category adds to downrange energy which additionally aids penetration. So, best of all worlds.

Ah, the new 6.8 Western, 2021’s entrant into the “who needs another one!” sweepstakes. It looks like a love child between a 6.5 PRC and .270 WSM. Winchester made it by pushing back the shoulder of the .270 WSM slightly, seating the aforementioned long bullets atop it, and chambering it in 1:7.5 twist barrels. I assume the Western’s shoulder has been pushed back to accommodate longer bullets and prevent 270 WSMs from chambering in 6.8 Western rifles. I think the 6.8 moniker was similarly chosen to prevent confusion.

The .270 WSM/6.8 Western similarity suggests the 6.8 Western is redundant, another cartridge no one needs, but I see it as the evolution or fine tuning of a great caliber for maximum efficiency. Here we have a .270 that gives us the heavier bullets many .270 Winchester shooters have long wanted, but in an efficient, short-action cartridge that can be built in shorter, lighter rifles. The question is, can it really compete with the 7mms?

An easy way to determine this is to first know that when bullet BC and MV are the same, trajectory will be the same. Identical drop and drift. If one bullet is heavier, it will retain more energy at all distances. Recoil in same weight rifles will be close with the heavier bullet kicking a bit more. The well-known 7mm Rem. Mag. kicks out a 168-grain bullet about 2,900 fps from a 24-inch barrel. The 6.8 Western spits a 165-grain about 2,970 fps as recorded on my chronograph. Let’s go to the tale of the tape.

Because zeroing for maximum point-blank range (MPBR) wrings the flattest practical drop trajectory out of any bullet, I’ve figured each of these for their MPBR on a 6-in diameter target. That leaves plenty of fudge room for poor shooting with an MOA rifle. With perfect aim these MPBR mean you could aim dead center at a 6-inch target and hit it from the muzzle out to MPBR. The bullet would fly not higher than 3 inches above point of aim and land no lower than 3-inches below point-of-aim. Deflection was calculated with 10 mph right-angle wind.

The above trajectories and energies might not be identical, but they are close enough that I doubt any shooter will detect the difference in the field. Run the numbers on 175-grain bullets or 150-grain bullets and you’ll find similar match-ups. Notice that both retain at 600 yards the arbitrary 1,500 f-p energy many consider a benchmark minimum for elk. I don’t think that’s necessary, but it can’t hurt, either. Except for the elk.

Recoil in 8-pound rifles will also be similar. The 6.8 Western should kick up 23.5 foot-pounds, the 7mm Rem. Mag. 24.3 foot-pounds. Another tie. So how do you decide between these two? Personal preference based on rifle availability, action length preferences, ammunition availability and cost, and perhaps tradition or bias. You might give the 6.8 Western the edge there because its rifles will be slightly lighter that 7mm Rem. Mags. of the same barrel length. But there’s nothing wrong with choosing based on your Grandpa’s favorite or your inherent desire to be different.

After a few years playing sherpa to a 10-pound bolt-action in .270 Winchester, I stepped down to a 6.4-pound M70 Featherweight and discovered a whole new joy in mountain hunting. Later I stepped up to 7mm magnums and .300 magnums and 325 magnums and just about every potential big game cartridge from a 22-250 Ackley Improved to a 416 Rigby. Today I’m confident a 6.8 Western will, as the Mountain Men used to say, “do to ride the river!”

Now all I have to do is find a rifle chambered for it. Stay tuned.