7 of the Best Modern Turkish-Made Shotguns for American Shooters

Turkey was once known for making shoddy shotguns. But the tide has turned, and there are some fine firearms being exported from this country to the U.S. 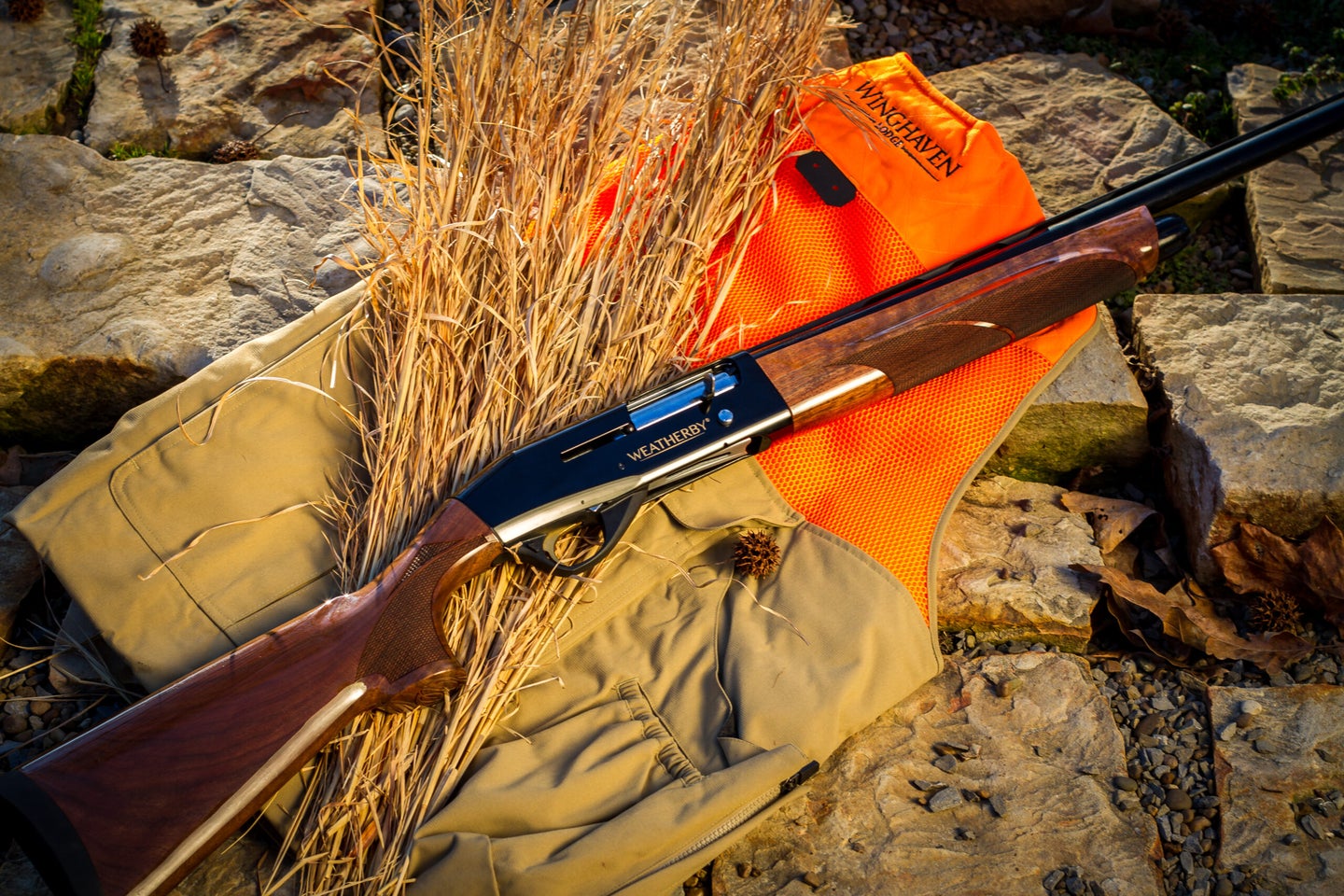 Turkey has stepped up its shotgun-making game. Brad Fitzpatrick
SHARE

At one time, shotguns built in Turkey had a pretty awful reputation. Which was warranted. Many of the inertia-driven autoloaders that came out of that country were junk, to be frank. They didn’t cycle shells with any reliability, and some of them were built with cheap metal. Years ago, I saw a piece of metal from a magazine tube break off a Turkish-made semi-auto during a pheasant hunt. It also began to double fire, shooting the first shotshell, cycling it, then bringing the second shotshell into battery and firing it as well—all without pulling the trigger and all very unsafe. The double-barrel shotguns were often built to a low standard too—and that’s being kind. Bubbled wood in the fore-ends, steel burrs on the receivers, and a poor fit anywhere steel transitioned to wood were just a few of the issues I saw.

But that stigma has largely gone away from Turkish-made shotguns. Sure, there are still some less-than-desirable shotguns that comes from Turkey. But a majority of the shotguns made there function properly, and can include gorgeous walnut with a high-gloss finish, which emulates premium-brand shotguns. Some of today’s Turkish-made guns can compete with models built in Europe, Japan, and the U.S. The best of these shotguns are designed by top engineers and machined with precision CNC equipment, so finding the right Turkish shotgun means understanding which factories are producing high-quality firearms. Here’s a look at seven Turkish shotguns that are worth their price tag.

During testing, the CZ 1012 cycled 5,000 rounds without cleaning or lubrication and didn’t malfunction or break. Few (if any) Turkish autoloaders could do that 10 years ago. The Turkish walnut stock has some geometric angles that not everyone will love. But when I tested this gun, I was impressed by the 1012’s ability to feed, fire, and eject everything from light target loads to 3-inch magnums. The control layout is sensible and there are no rough edges or ill-fitted pieces. Everything about this gun is solid and well-engineered. Perhaps the most impressive thing is the price, which starts at just $645. CZ 1012 shotguns come in 12-gauge with a 3-inch chamber and are available with wood stocks and fore-ends that have receivers and barrels finished in matte black chrome or Cerakote. Synthetic camo models are also available.

I was a fan of the original Orion shotguns made by SKB in Japan, so when Weatherby resurrected the Orion nameplate in 2015, I very much hoped the brand’s Turkish-made over/under would be equally as reliable as the old gun. Happily, it is just as reliable. The Orion I own has all the features shooters and hunters want, like automatic ejectors, three interchangeable choke tubes, chrome-lined bores, and high-end walnut with a clean wood-to-metal fit. The field version carries an MSRP around $1,000. For those who don’t care for the signature Weatherby high-gloss finish, there’s a muted matte blue version. If you’re getting into clay shooting, Weatherby’s Orion Sporting (MSRP $1,099) is about half the price of competing clay-target over/unders. The Orion has a fat fore-end, but it doesn’t affect the weight of the gun (7 pounds) much, but does offer a better grip. There are 12- and 20-gauge models available in 3-inch chamberings.

Tristar has been in business for 25 years and the company continues to import some of the very best guns from Turkey. It’s tough to make a shoddy gas-operated autoloader, because there are so many more moving parts than in inertia guns, and the the Viper G2 delivers. Tristar runs extensive testing on each new model that involves firing several thousand rounds through randomly-selected guns. They are also a great value. I tested the Viper G2 Bronze ($900) in 28-gauge and fell in love with the gun. The wood was exceptional, and the bronze surface treatment on the receiver was a nice touch in a sub-six-pound shotgun. The gun is also available in 12-, 20-, and 16-gauge, plus .410 bore, a nice option as there are not too many semi-auto .410s being made. Tristars also are known for patterning well, too. The company uses Beretta- and Benelli-style choke tubes, which brings added value to its guns, because they all typically shoot damn straight.

Weatherby’s Italian-built 18i semi-auto shotgun receives the lion’s share of attention, but don’t ignore the company’s Turkish-made Element inertia-operated semi-auto. Owner Adam Weatherby vets Turkish factories that produce the company’s guns and sets the build-quality standards extremely high. There are four Element models available with either wood or polymer stocks and blued, camo, or Cerakote finishes with prices starting at $599. These guns have proven themselves in the dove fields of Argentina where sub-par semi-autos will die an ugly death. The Elements I have tested handled and shot well, but there is a breaking in period with them. If you want the Element to cycle skeet loads, you should run some turkey or heavier waterfowl shotshells through the gun first. Features include three chokes (four in 12-gauge models, which include an extended modified/long range steel tube), a fiber-optic front sight, drop and cast adjustment shims, and a chrome-lined bore. The Element is available in 20-gauge as well.

I’ve hunted doves in Argentina’s Cordoba region with Stoeger’s M3000 12-gauge and M3020 20-gauge. Last year I spent two days killing snow geese in Missouri with the company’s new M3500 Snow Goose shotgun. That’s a lot of high-volume shooting and a lot of abuse, and the Stoegers have operated flawlessly. One thing I have noticed is for these shotguns to function properly, you need to lightly apply gun oil to the action from the start. Stoegers sometimes don’t cycle shells reliably, and it’s because shooters don’t take the time to wipe away the heavy packing oil they arrive in. Or, they buy one used and don’t clean and oil the gun. These are price-point guns, so they need a little extra attention, but they’ll run if you maintain them properly. The fit and finish isn’t what you’ll get with a Benelli, but for the money, the M3500, 3000, and 3020 are all great values. The M3000 and M3020 shotguns cost $559, and the 3 ½-inch M3500 12-gauge starts at $669.

Every competitive shooter wants to get an edge on their opponents, and for some that means spending a lot of money on a premium shotgun. But you don’t need to, especially if you’re a weekend shooter or just joined a trap league at the local range. The 12-gauge TT-15 Sporting is a solid choice for any clay-target discipline. It comes with extended choke tubes, a wide rib for a better view of the target, ported, chrome-lined barrels, and ejectors for $990. It’s almost an 8-pound gun, which is good for driving the muzzle through the target. Also, the TT-15 Field is an excellent hunting option. It’s available in 12-, 20-, and 28-gauge, plus .410. I’ve shot the 28, and it is one of the most accurate over/unders I have ever handled. Some guns just fit, but I’ve found Tristars fit me better more consistently than just about any other manufacturer’s guns. The 12-gauge is just 7 pounds, which is great for carrying afield, but I do like a little more weight in big-bore over/under to mitigate recoil, so I’d recommend one of the sub-gauge models.

The CZ Swamp Magnum will not win any beauty contests, but it is a versatile shotgun that’s suitable for every bird season. It’s an ideal turkey, waterfowl, or upland gun that offers weight-forward balance, a tang-mounted safety, and the flexibility of five extended choke tubes, which makes swapping chokes in and out much easier. In summer you can shoot trap, skeet, sporting clays, and five-stand with the synthetic over/under. Available in black or camo, the Swamp Magnum features 3½-inch chambers, which you can shoot at your own discretion (a 3½-inch load generates a lot of recoil in a 7.1-pound double-barrel shotgun). It also comes with sling studs, a convenient feature not found on many over/unders since most are upland-specific shotguns. The price of the Swamp Magnum is $1,109, which is a good deal for a quality-built shotgun that’s this versatile and durable.