That slide stop is there for a reason 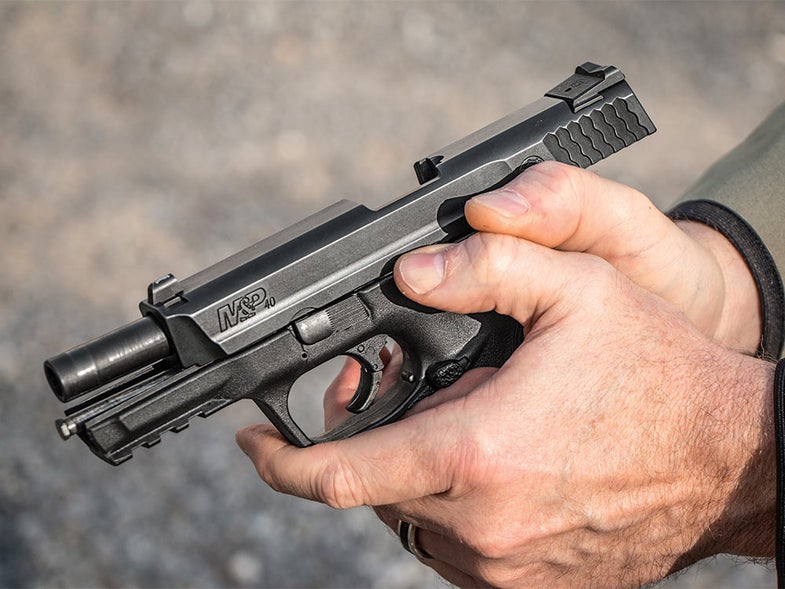 The author argues against using the slide stop to recharge a pistol. Richard Mann
SHARE

There’s a little lever on the side of most semi-automatic handguns. It’s called the slide stop. It’s there for a reason. When you’ve fired the last round in your pistol’s magazine, the magazine’s follower pushes up against the slide stop and causes it to catch in a recess in the pistol’s slide. This, in turn, causes the slide to be locked back. When you see and/or feel this, it’s a good indication your pistol is out of ammo. A slide stop can also be handy when you’re conducting maintenance or trying to clear a particularly stubborn stoppage.

Some firearms instructors teach that the slide stop should be used as a slide release. Now, I’m not going to say this is wrong, unsafe, or even immoral. What I want is to present the facts to you. You can make up your own mind.

It’s a Stop, Not a Release

Gunsite Academy teaches that once you’ve reloaded your handgun, you should point your thumb toward your chest and grasp the slide between your thumb and all four fingers. Then you should forcefully pull the slide to the rear and release. This will disengage the slide stop, and as the slide goes forward, it will chamber a cartridge from the new and fully loaded magazine you’ve just inserted. Instructors who advocate using the slide stop as a slide release argue that it’s faster. It probably is. Others, like those at Gunsite, who teach releasing the slide by pulling it to the rear, suggest that pushing down on the slide stop with your thumb is a fine motor skill, and that fine motor skills can deteriorate when you’re under stress. They can and do.

Do You Even Need a Slide Stop?

Most of the 13 years I worked in law enforcement—on the street and as a firearms instructor­—I carried a Glock. My interface with the Glock pistol was never ideal, and it was common for my support-hand thumb to accidentally engage the slide stop during a string of fire. Yes, this was a training issue, but it was one I was never able to completely overcome. My solution was to remove the slide stop on my duty pistol so it would never happen at an inopportune moment.

This meant I had no option but to cycle the slide of my handgun by hand. Practically speaking, this is not really a bad approach. If your pistol does not fire, initially you do not know if this is because of a dud, a failure to feed, or if you’re out of ammunition. The Immediate Action drill for a semi-automatic handgun dictates tapping the magazine to ensure it is fully seated and then racking the slide. Incidentally, these are the same motions that must be performed to conduct a reload. My approach to dealing with my training problem with the Glock was to simply make Immediate Action my default response to a failure to fire, whether from a malfunction or because my pistol was empty.

One Technique, Any Gun

Another thing to consider is that, given the circumstances, you may not be fighting with the pistol of your choice. You might end up with a borrowed gun, one different from what you’re familiar with. Some semi-autos do not have a slide stop, so training to release a locked slide with the slide stop is not training for proficiency with every semi-automatic you might find in your hand during a dangerous situation. Some slide stops are also very small and difficult to release rapidly with your thumb.

Read Next: How Handheld Shot Timers Can Make You a Better Shooter

Is There a Best Method?

I think this mostly depends on you, your pistol, and how you plan to use it. Releasing the slide stop with your thumb is probably the fastest method, and in competition and self-defense situations, speed matters. However, from a personal-protection standpoint, what happens if you fail to release the slide stop with your thumb? In competition shooting, you can make up time lost in one stage on the next one. When shooting in self-defense, what you risk losing is your life—not seconds on a shot timer.

I’m not sure there is a best answer for everyone. Decide which method works best for you and practice it until your fingers bleed. In the end, that might circumvent your bleeding from someplace a lot more vital.