Handgun Review: The CZ P-10M Is a Solid Choice in the Crowded Micro 9mm Field 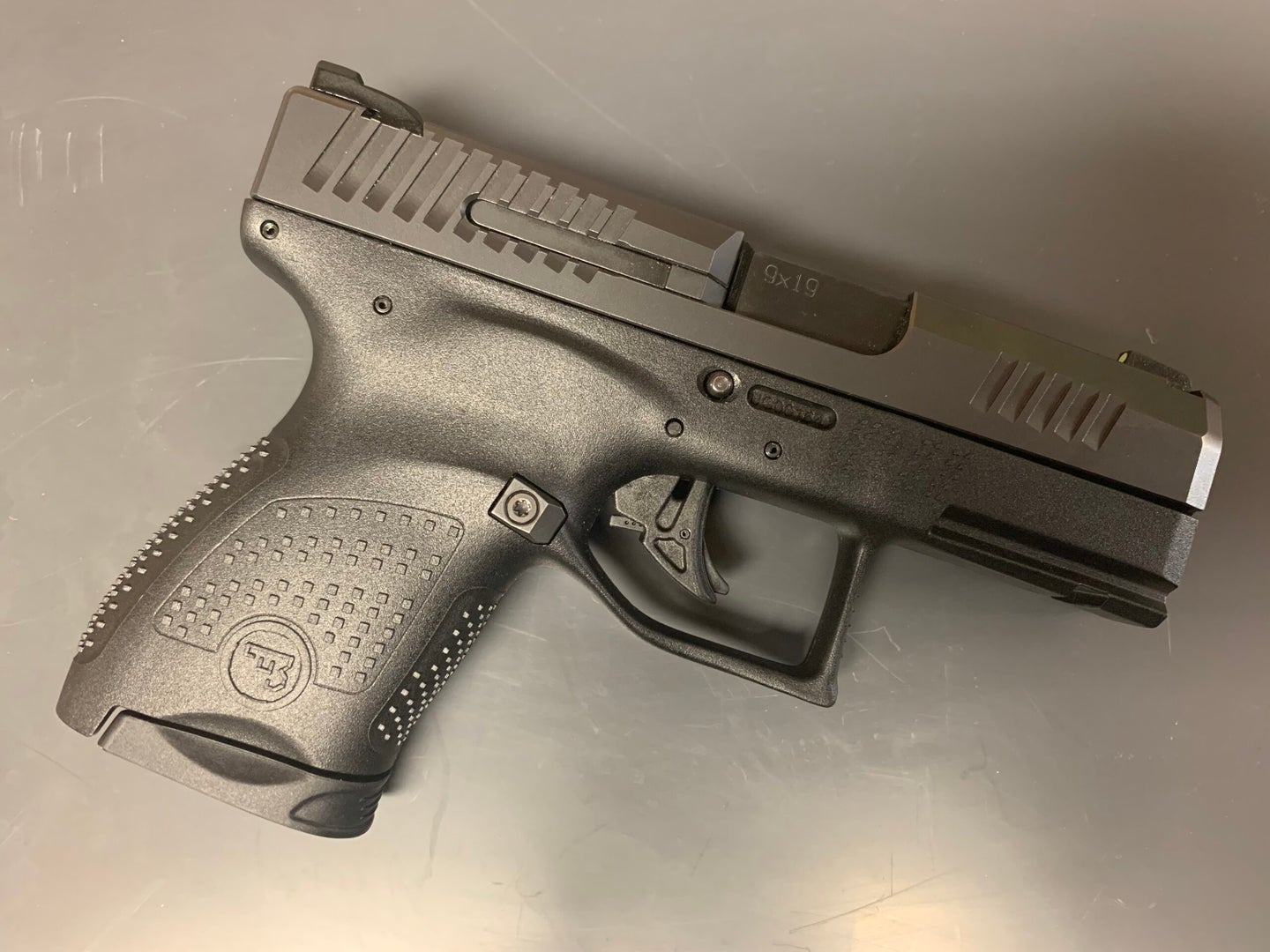 The new CZ P-10M is the latest in CZ’s P-10 lineup that was first released in 2017. The P-10 series borrows the popular ergonomics of the metal-frame CZ 75 pistols, creating an effective and comfortable polymer-framed striker-fired pistol. The CZ P-10M is the most compact version of the P-10 series and fits into the highly competitive micro-compact 9mm pistol market.

Although the CZ P-10M is technically a line extension and not a unique design, it takes some notable departures from the larger P-10 models which optimize it for concealed carry, increase simplicity, and reduce snagging. It has a 7-round magazine capacity and a slim grip that doesn’t feature interchangeable backstraps—something the other P-10 pistols have.

The CZ P-10M Is Small, Simple, and Streamlined

The CZ P-10M generally follows the design of the rest of the P-series in its look, feel, and operation—it’s just smaller. Similarities include a block-shaped slide that features an angled bevel on the top corners that starts at the front of the rear sight dovetail and widens out all the way to the front of the slide. The bevel reduces the overall width of the front of the slide and is pleasing to the eye. The slide also features aggressive cocking serrations at the front and rear. The only noticeable difference with the P-10M’s slide is that the rear is vertical—not pitched forward like the larger P-10 pistols.

The ergonomics and shape of the CZ P-10M are like those of the larger P-series pistols, but the P-10M’s grip is dramatically slimmed down. Even within the wide field of micro-compact 9mm pistols, it’s notably skinny. At its widest point, the P-10M’s grip measures 1.02 inches, but is only .88 inches wide at the top of the grip. My Kimber Micro 9 has the same capacity and the thinnest portion of its grip is 1.07 inches wide. Front-to-back, the P-10M’s grip measures 1.75 inches and the Kimber measures 1.85 inches. On this scale, small differences in size and shape can make big differences in fit and feel. Compared to many other micro 9mm pistols, the P-10M’s grip feels petite or even dainty—something shooters with smaller hands might appreciate. Compared to a common compact pistol like the Glock G19, the grip of the P-10M feels exceptionally nimble.

The most notable pistol to compare the CZ P-10M with is the Glock G43X. The P-10M is very close to the G43 and G43X in size, but slightly smaller in length, height, and width. The humped grip has an angle similar to the G43X and both give the shooter a grip that’s close to the bore axis. The CZ P-10M features a staggered magazine—wider than single-stack, but not fully double-stack—that holds seven rounds. The P-10M’s total capacity of eight rounds is edged out by the G43X’s capacity of 11 rounds, but it’s impressive considering the contours and slenderness of the grip. The P-10M also features a large and roomy trigger guard and something the G43X doesn’t have: a slotted accessory rail. I also find the factory sights on the P-10M better than those on the G43/43X.

The takedown system of the CZ P-10M is also simplified from other P-series pistols and similar competitors. Other P-10’s use a takedown system similar to that found on Glocks, while the P-10M uses a simple takedown pin. To disassemble the pistol, the trigger is pulled to de-cock the gun, then the slide his pressed a few millimeters towards the rear so the takedown pin can be pushed out from the right side of the gun. The slide can then slip off the frame. Replacement is just as simple, and the process is foolproof.

I found the CZ P-10M to be reliable with a variety of ammunition. While testing, I fired approximately 250 rounds through the pistol without experiencing a single malfunction. I fired 115- and 124-grain Remington UMC FMJ loads, and several defensive loads, including Federal Premium 124- and 147-grain HST and Browning 147-grain BXP X-Point ammunition, without any accuracy or reliability issues. I kept hits within the A-zone on a USPSA target face at 50 feet without any trouble. At the more realistic defensive range of 15 feet, I could regularly place all rounds inside the A-zone while firing as fast as I could.

Initially, I found recoil of the CZ P-10M challenging to manage due to my large hands and the characteristics of the grip. With some additional care and some grip adjustment, however, I found it became easier to control. One problem I had was accidentally releasing the magazine while shooting. Because of the size of my hands and my grip, I inadvertently depressed the magazine release button sometimes while the gun was cycling. The button doesn’t appear to be poorly positioned—it’s well below the thumb and a low-profile design—it’s just very sensitive. I’m certain that it was my support hand contacting the button and releasing it during recoil. I had no issued shooting single-handed or with a loosened support hand.

The trigger of the CZ P-10M immediately struck me as heavy. It came out to 7 pounds, 10 ounces with a Lyman trigger-pull gauge, which is significantly heavier than many pistols in its class. However, I found the trigger pull to be smooth with a crisp, consistent break. The reset is short and crisp with good spring tension pulling the trigger back through the reset. Despite the trigger being heavy, the smoothness of the take-up and the short reset make it a pleasure to shoot. Even during strings of rapid shooting, the trigger breaks the same every time, and the reset is easy to feel.

The raised texturing on the grip provides great traction on the otherwise slick polymer grip, and once I established a good grip on the gun, it didn’t slip. The texturing on the back of the grip was a little painful while shooting, digging into the palm of my hand, but the sharpness could likely be softened by a few strokes with a piece of sandpaper or simply allowed to smooth over time with use.

Where the CZ P-10M Excels

The CZ P-10M has exceptionally slim grips that will fit shooters with smaller hands. It’s internal slide stop and simplified takedown mechanism make it a streamlined concealed-carry gun. The Picatinny rail can host a number of lights and lasers—something that many other micro 9mm pistols don’t have. Finally, the trigger is heavy, but smooth and crisp with a great reset.

Where the CZ P-10M Falls Short

The CZ P-10M has a very sensitive magazine release button and it can be accidentally pushed while shooting. The magazine catch appears to be reversible for left-hand use, but it’s not.

The micro 9mm pistol market is cutthroat, and full of innovation and competition. This makes it tough for individual products to stand out, but it also provides the opportunity for customers to be hyper-selective and pick a pistol that truly works best for them. The CZ P-10M gets beat in capacity, but it’s right with the pack in overall size and will find fans in those who prefer a slender contoured grip.