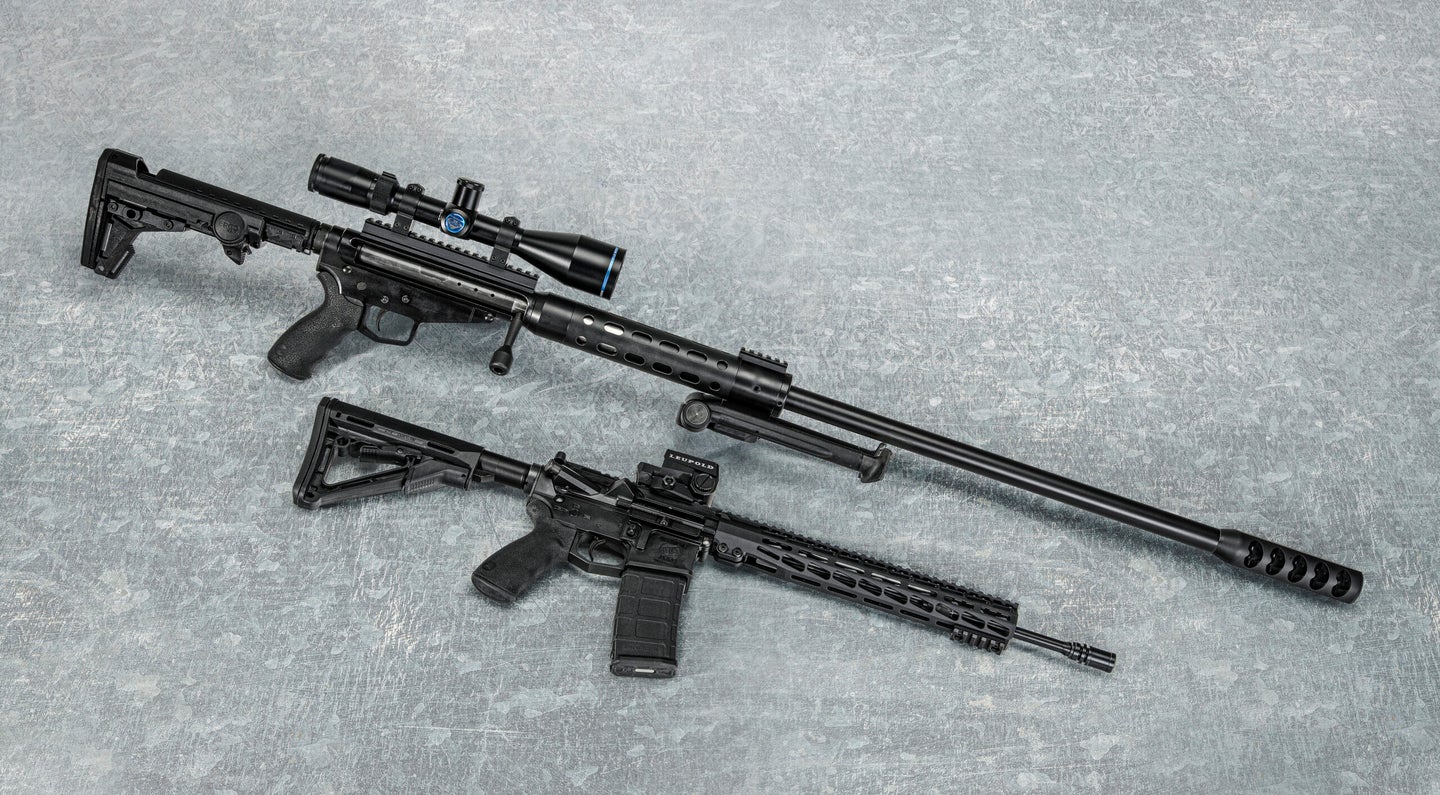 The term “space age” doesn’t pack the descriptive punch that it once did. After all, it dates to 1957, when the Ruskies launched Sputnik, a 22-inch metal sphere, into orbit, scaring the bobby socks off the rest of the world. However, there’s no better label for the new material that’s been developed by Polar Rifle Barrels for Ultimate Arms and other gunmakers. It is a magnesium alloy that has been used on space shuttle rocket boosters, so it is not only super light, but it dissipates heat like nobody’s business. During the forging process, the barrels are cryogenically treated (hence, “polar”) to reduce friction, which minimizes heat buildup, improves barrel life, and should help with accuracy. I had a chance to try out a couple of the first firearms made with this metal, called ZK Magna, earlier this summer.

One was Ultimate Arm’s new magazine-fed .50 BMG sniper rifle, the Warmonger LR25-Magna. A rifle configured like the Warmonger will typically hit the scales at 30 to 35 pounds. A 31-inch steel barrel or a .50 BMG normally weighs 15 pounds or more. Forged from ZK Magna, the Warmonger’s barrel is just 4½ pounds.

All in, with a scope and bipod, the rifle is a little more than 14 pounds, meaning it can be fired from the shoulder without difficulty, something no other .50 can boast. That discounts the difficulty that goes with shooting a cartridge that generates about 13,000 foot-pounds of energy at the muzzle, more than three times that of a .300 Win. Mag.

To put it in perspective, the material is as light as plastic but strong enough to handle the forces generated by one of the most potent centerfire rounds ever created. For the people who have to carry such rifles for their job, ZK Magna is a godsend.The alloy is also being used by Ultimate to make ARs. The company’s Black Widow has an upper and lower constructed out of ZK Magna. The Black Widow handles more nimbly than a traditional AR and is far easier to carry. During my time abusing the gun—my son and I did repeated mag dumps to heat it up and put the rifle under stress—it had zero malfunctions. As the Polar Rifle Company gets rolling, I expect its barrels will appear on mountain rifles and long-range rifles, where trimming weight is desirable.

Read Next: The 18 Best New Hunting and Precision Rifles, Tested

Neither of these rifles were set up for extreme precision, so I don’t have a take on the accuracy potential of ZK Magma yet. But if Polar’s barrels can deliver small groups in addition to all their other virtues, they could be a legitimate game changer for military and sporting arms.