A team of shooters hit a steel target at 7,744 yards in the Wyoming desert, besting the previous record by several hundred yards 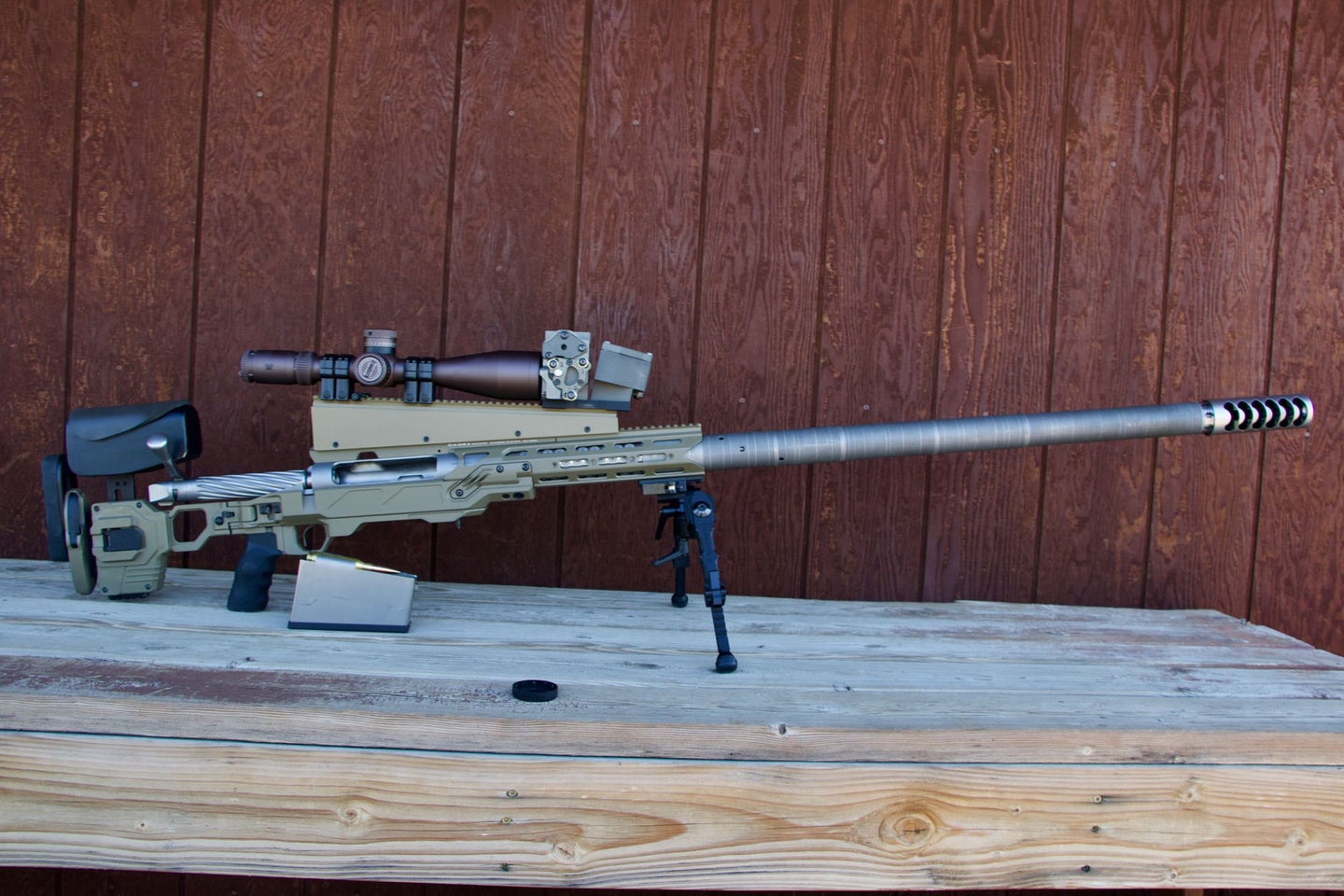 This is the rifle that set the new record for the longest hit on a target—a 4.4 mile shot using a highly customized .416 Barrett. Matthew Mellor
SHARE

The long-range shooting world record was broken yet again when a team of spotters and a shooter hit a target at 4.4 miles (7,744 yards) in the Wyoming desert earlier this month. The marksmanship feat was orchestrated by Scott Austin and Shepard Humphries, who run Nomad Rifleman, a long-range shooting school out of Jackson Hole, Wyoming.

Together with a group of friends they spent several hours launching bullets downrange before connecting on their 69th shot, according to a release on Nomad Rifleman’s website.

Making that many shot attempts isn’t unusual when trying to set records of this type. Humphries noted that the previous record, a four-mile shot made by Paul Phillips in 2019, required 69 attempts as well before the shooter connected.

World-Record Shot: Skill, Luck or Both?

With a 1.44 percent hit ratio, a shooting exhibition like this does raise an obvious issue: What does it signify in terms of actual marksmanship? That’s a somewhat difficult question to answer as a lot of skill, engineering, and prep work—more than 1,500 hours, according to Humphries—went into the feat, which required an element of favorable probability (aka luck) to come to pass.

The target they shot at was constructed of thin sheet metal and measured 10 feet wide by 7.6 feet tall. It was also placed at a steep angle so it would be more in line with the fall of the bullet as it came back to earth. The target’s dimensions (120 inches by 92 inches) made it 1.54 MOA wide and 1.18 MOA tall at 4.4 miles. At 1,000 yards that would be a sporty target—basically 15.4 by 11.8 inches—but by no means difficult to hit consistently with a good rifle and ammo. But there’s a world of difference between ringing steel at a grand and doing it at more than 7,700 yards.

To tip the odds of success in their favor, Humphries and Austin built a specialized rifle, sourcing components from around the world.

Ammunition For the 4.4-Mile Shot

The ammunition used for the record rifle shot was made by Unknown Munitions in Post Falls, Idaho. They used Barret brass, H50BMG propellant and CCI135 primers. The .416’s muzzle velocity was 3,300 fps and by the time the bullets reached the target (which took more than 24.5 seconds), they had dropped to 689 fps.

For the shot that made the impact, Austin gave the shooter a correction of 1,092 MOA of elevation and 17 MOA left hold. (I’m not using the term windage, as the wind value was only one of several variables affecting the bullet’s horizontal drift. Spindrift [where the bullet angles in the direction of its spin] and the Coriolis effect [the rotation of the earth, by which the target shifts position while the bullet is in flight] also play a role at that distance. That said, a 1 mph increase in wind would cause 26 feet more bullet drift, according to Humphries.)

When you think about the variables the bullet encounters with wind alone over 4.4 miles you can see where striking the target—at least with today’s technology—involves probability and chance. Add in other factors like variations in muzzle velocity and in the BC of one bullet to the next and this becomes only more pronounced.

One of the more unorthodox elements of this experiment was how the team of spotters located the misses. They were positioned in metal bunkers around the target and listened for the impacts rather than looked for them. When shooting at longer ranges (a mile or more) one problem that rears its head is the ability of the shooter to spot misses as the impacts become fainter and are more easily swallowed up by the terrain without a trace.

When arguing about cartridge selection for ELR matches, this is one item in favor of the larger calibers—that the bullet splash and impact signature are easier to see. But even when shooting a beast like the .416 Barrett, spotting impacts becomes difficult at 4.4 miles. In fact, Humphries said that 90 percent of the misses during their shooting gave no visual signature at all—even with the spotters placed within the impact zone.

By using their ears and triangulating what multiple spotters heard they were able to get reasonable feedback to fine-tune the shooting over the course of the morning.

World-Record Shot: Could You Do It Twice In A Row?

Humphries and Austin acknowledge that the hit isn’t a repeatable event, even after several hours spent walking the shot closer to the target. But the fact that they were able to get any shot on to the metal plate is a testament to their equipment and skill.

I think the real benefit of these experiments is the improvement in our long-range shooting skills and collective knowledge at closer ranges, meaning at 3,000 yards and in. We’ve seen an uptick in the ability of shooters in competition to get hits within the framework of these matches, where you have a handful of attempts (usually three to five) under a time constraint to hit steel targets at distances that just a few years back would be considered unimaginable.

There’s no doubt that in time someone—perhaps working with Humphries and Austin—will back up from a steel plate beyond 4.4 miles and do their best to lob rounds into it, establishing a new record rifle shot, all the while helping us become better shooters in the process.