Best known for fine shotguns, this Italian company jumps into the bolt-gun market with a sub-MOA .30/06 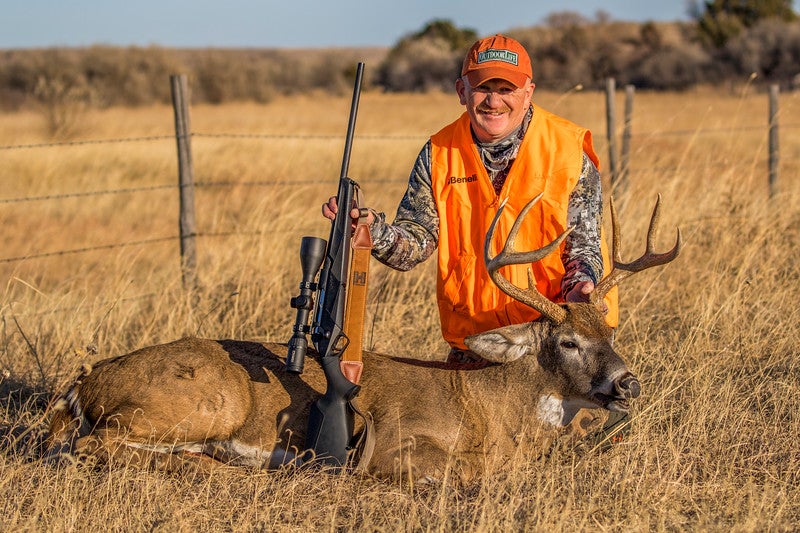 The new Benelli Lupo is currently offered in .30/06, but the company plans to chamber the rifle in most popular cartridges. Mark Copenhaver
SHARE

Benelli is plowing new ground in 2020. Though known for its high-end shotguns, the Italian gun maker has entered the bolt-action market with a hunting rifle called the Lupo.

I got an early look at the Lupo, which is Italian for wolf, and hunted whitetails with it last fall in Nebraska. It’s an interesting new design, one that incorporates a lot of features to enhance the rifle’s ergonomics and performance.

I received the rifle a couple weeks before the hunt and was excited to see how it would perform. Prior to going to the range I disassembled the rifle, taking it completely apart. I wanted to take that opportunity to closely inspect the Lupo and see what made it tick. Even without the benefit of a manual I had the rifle broken down in less than 10 minutes.

I immediately noticed that the trigger and safety were unlike any I had seen previously. The trigger mechanism is manufactured from a combination of traditional steel parts as well as a synthetic polymer. Benelli engineer, George Thompson reported that the trigger assembly is completely new but takes its foundational cues from the R1 rifle.

Thompson said that the safety mechanism is similar to the tang safety of a shotgun and includes a mechanical block actuated by a transverse cam mounted on the side of the assembly.

Key Features of the Benelli Lupo:

The best term I can find to describe the Lupo is, hybrid. It is clear that that the lines of this gun are influenced by its Italian lineage, but the flexibility, modularity, and adaptability of the fit and finish allow it to be specifically adapted to the individual shooter.

Benelli promises sub-MOA precision with three-shot groups, but my prototype shot a might better than that. Prior to the hunt, I put about 100 rounds downrange. My gun, chambered in .30/06, really liked Hornady Precision Hunter 178-grain ELD-X, which consistently printed .75-inch five-shot groups.

Some might call me weenie, but as I’ve gotten older, I’ve become a bit more sensitive to and aware of felt recoil. Since I was 11 years old my go-to gun has been chambered in 30/06 so as I nestled myself into the Lupo for the first time I was a bit apprehensive about the beating I was about to take. On my first shot, the trigger broke crisply and the bullet hit exactly two inches high at 100 yards. The second shot was nearly an exact repeat with the hole toughing the first, ditto on the third shot. Then I thought to myself: Where is the recoil? It was clear that the recoil management system works.

I’ll be honest, I’m not a huge fan of detachable box magazines. I find them clunky and cumbersome and more often than not, simply in the way for an open-country mule deer devotee like myself. Please don’t get me wrong I understand their inherent utility, functionality, and safety, and I’ve loaded thousands of them over the past several years. Immediately I noticed that the Lupo detachable box magazine was different. In fact, I’m convinced it is the most user-friendly magazine I’ve ever loaded. Its double-stack orientation makes placing cartridges in the magazine simple. When the magazine is inserted into the lower receiver its slender, styled lines make it feel like it is an integral part of the firearm’s balance and function. Single-hand carrying is comfortable and when slung over a shoulder the magazine does not protrude and catch on clothing, making it easy to transition from a shoulder slung carry to a firing position.

After flying into Denver and driving several hours, the group I was with arrived at the Brush Creek Ranch nestled along the North Platt River. There we met Ryan Livingston, Outfitter and CEO of Prairie Rock Outfitters. Ryan looked us over, I thought he spent just a little bit extra time sizing me up, a fellow ranch kid. He smiled and told us he’d be back at sun up.

Dawn of the first day of our hunt arrived, breakfast was served, we grabbed lunches, daypacks, and rifles and we were off. First, we checked zeros and then I was placed in a blind near a large cornfield. I settled into for a day-long sit—after about 15 minutes I started checking my watch. I couldn’t believe how slow time moved. I texted my wife and told her that I probably should have taken a double dose of Ritalin because I was a bit distracted. I grew up hunting literally out my back door, striking out on my own and making it happen. Looking out the small window of that blind at the same diminutive patch of Nebraska felt like solitary confinement to me. I struggled but I made it through the first day without seeing any big bucks and I’d eaten my entire lunch by 9:00 A.M. so I was hungry!

When I arrived back at the lodge, Ryan asked me what I’d seen and if I wanted to go back to the same area tomorrow. I think the pained look on my face made it clear that I’d perhaps like a change of scenery, and with over 300,000 acres available to hunt, the Prairie Rock crew was able to accommodate my request.

I spent the second day in a box blind overlooking a hay field along the Platte. The spot certainly had the potential to harbor an outsized mature buck but none materialized. I did see some deer late in the day, a big-framed 3×3 buck among them, but he was fairly young. I decided I’d let him live for another year.

The morning of the third day broke to find me high in a Cottonwood tree literally on the bank of the North Platte. It was my first day ever in a tree stand. Somewhere around 2000 geese flew within range of my stand and I wished I had a shotgun instead of the Lupo, but then deer started wading across a sand bar in the river. When they finished, 23 deer had crossed the river but none were what I was looking for just yet so I waited, and waited, and waited—and realized that there was an entirely new set of logistical challenges when it comes to tree stand hunting. For example, don’t drop your mittens, calf cramps could be lethal, and sometimes your friendly neighborhood squirrel really isn’t friendly at all.

Around noon, I clattered down from my stand to grab a sandwich for lunch and to stretch my legs just a bit. Just about the time I finished my sandwich, Ryan arrived at my stand, smiled and said, “I’m a mule deer hunter just like you. Are you ready to get out of the stand and try a spot and stalk on an open country Nebraska whitetail?”

I’m sure the smile on my face was all the answer he would need. I gathered my gear in record time, hoping I’d seen the last of a tree stand for at least a day. Ryan told me that earlier he had spotted a solid buck near the river but he would be difficult to find and even harder to kill, the stalk would be hard and shot was probably going to be a good poke.

We drove to the spot where Ryan had last seen the buck and walked for about 45 minutes but as we eased our way along a small bluff we saw the buck, locked up and tending a doe. He was at on the edge of the Platte at 290 yards, it’s a shot I’ve made several times before, but there was only one problem—the area the buck was in was a restricted shooting zone, centerfire rifles couldn’t be used until he was 110 yards from the river.

So we waited, a doe ambled by and busted us, and then joined the buck we were watching. If she continued to move him upriver, we’d never get a shot but apparently the initial doe was the jealous type. She decided that she was tired of the new company so she got up and began to move. She moved away from the river, continually angling away from us with the buck following closely behind. Ryan and I snuck closer and closed the distance to 356 yards, the buck had just jumped a fence that we estimated to be more than the required 110 yards from the Platte’s banks.

Ryan laid his pack down and I settled into a prone position. I held the crosshairs about three inches over the buck’s back, exhaled and compressed the trigger. The bullet struck home and the buck dropped without making a move, dead where he fell. The 178-grain Hornady ELD-X had broken the front shoulder and destroyed both lungs. Ryan congratulated me and looked at me with that same wry Nebraska ranch kid smile and said, “I bet you’re glad you don’t have to sit in a stand again tomorrow!”