The 4 Coolest Rifles I’ve Ever Fired

After shooting and hunting with hundreds of different rifles through the years, these four are the most memorable 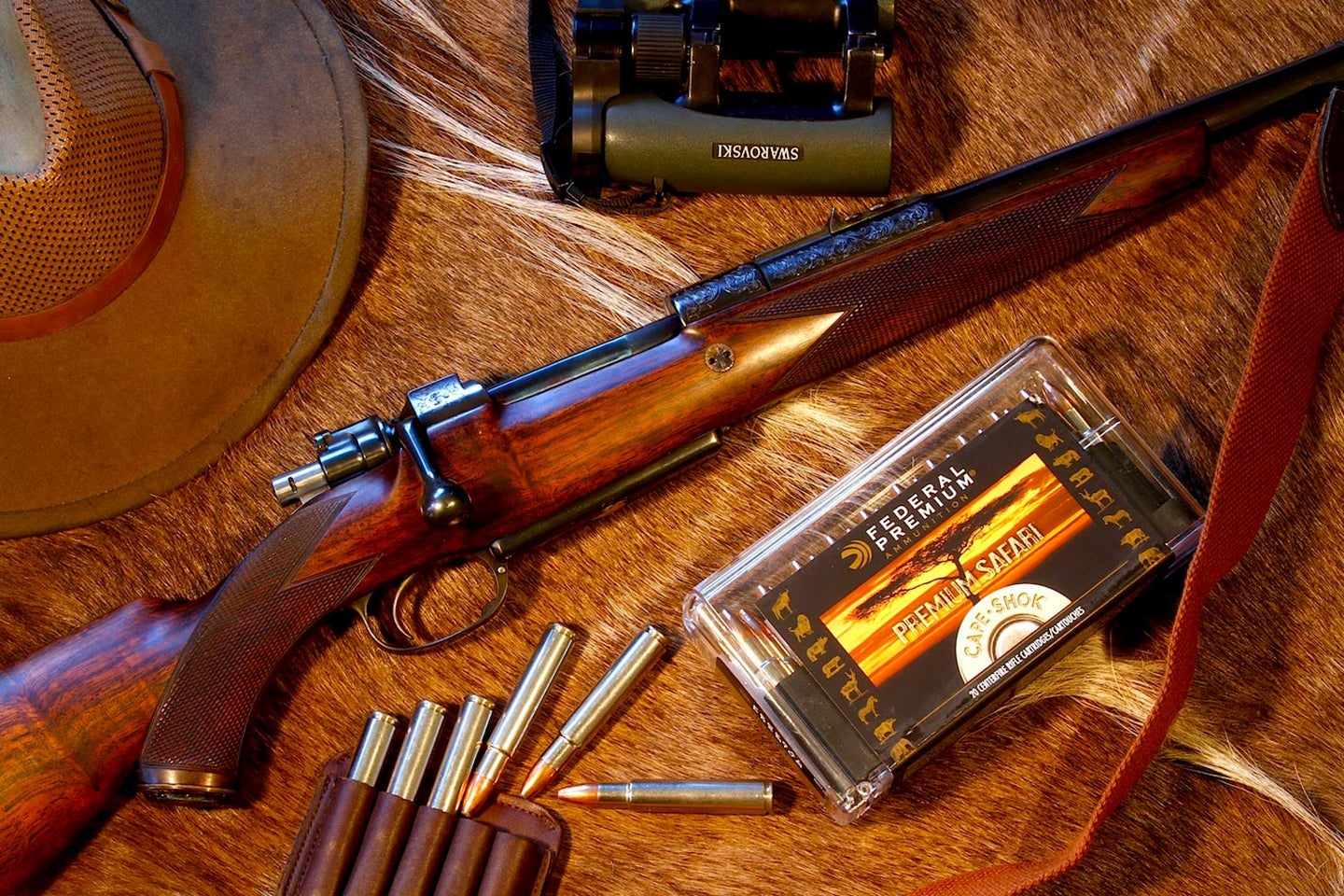 Most hunters inherit or buy a rifle and learn to love it. A few are dissatisfied and search and search for the perfect model. A few churn through gun after gun, enjoying each for what it does well, but always trade up or try something new. This constant searching and cycling reveals what most of us might consider some “cool” guns—actions, sizes, calibers, and qualities that somehow combine to heighten the cool factor. Cool, however, is in the eye of the beholder. Below are some of the most awesome rifles I’ve been fortunate to shoot and hunt with. See if you agree or if you’ve shot some that are even cooler. If you have, tells us about them in the comments section.

The coolest rifle I ever shot was a Winchester Model 94 lever-action in .30-30 Winchester with open sights—just as it came off the manufacturer’s floor. It was 1968. I was barely old enough to legally hunt deer, but barely is good enough when you’ve been champing at the bit for four years.

“This is what you should get,” the dealer said as he handed over a Model 70 bolt-action. It looked klutzy and un-cool compared to that lever-action cowboy gun I wanted to buy. All the TV heroes shot lever-actions—Clint Eastwood, John Wayne. Besides, I’d trained on a Daisy Red Ryder BB gun.

“Let me see that lever-action in a thirty thirty,” I said, pointing behind him at his basement wall lined with rifles. Back in those days virtually anyone could buy and sell guns out of their house if they wanted. And we drove to school with them in our pickups, most of them hanging in a rack against the rear window for everyone to see, the pickups unlocked. This had been going on since pickups were invented. No one had ever stolen a gun one or used it to harass, threaten, or kill anyone in the 85-year history of our town.

“It’s one of them really fast little rounds that doesn’t kick much but shoots a lot flatter than that .30-30. You’ll be able to reach out farther for those West River bucks. Better for antelope, too.”

But the lever-action looked and felt too familiar. I bought it. A month later, a whitetail came streaking down the line of drivers in the Black Hills pine forest. Everyone was shooting at it like we were in a gallery at the county fair, so by the time it reached me, the last gun on the line, it had reached terminal velocity. I swung, missed, swung father, realized I had so much lead I couldn’t even see the deer anymore, and swung back. When it came into view, I shot. Got it right in the heart. Don’t ask me to do that again.

My next deer was a big buck. My uncle said it looked more like one of his Angus bulls. It jumped out of the Missouri River bluffs and ran for a deep side draw. My cousin hurried it along with a few .30-06 rounds. My .30-30 slugs kicked up dust behind, each shot poofing dirt a little closer until the third rolled him. Two tags, two deer, one .30-30 lever-action. A cowboy rifle. Can it get any cooler than that?

Sadly, I haven’t a single photo of me, that rifle, or those deer. Just memories.

Read Next: 10 Great Guns That We Wish Were Still Being Made

When I recognized the limited range of my .30-30, I traded it for a cheap Remington M788 in 6mm Remington, the .243 Winchester’s closest competitor. I soon sold it and bought a Ruger M77 in .270 Winchester. Both accounted for a lot of deer, antelope, and coyotes, but neither was really cool. The Ultra Light Arms Model 20 in 284 Winchester was. This featherweight proved to be a guided missile launcher in disguise.

The year was 1987 if I remember, and mountains were no longer on my horizon — they were under my feet. And humping up and over them for five, ten, sometimes 17 miles a day under a full backpack was less fun when I added an 8- to 10-pound rifle to the load. Melvin Forbes of West Virginia had just released his 4-pound, 12-ounce ultimate mountain rifle and I grabbed it like a helium balloon before it could float away.

The M20 was a short-action, push-feed bolt fitted with a 22-inch barrel full-length-bedded to a unique carbon/Kevlar stock so stiff that barrel vibration stopped after just 12 inches of bullet travel. Mel’s slim action withstood chamber pressures twice the industry standard. And he chambered it for the unappreciated but deadly .284 Winchester, the first “short fat” magnum, even though it was never called that.

Handloaded 140-grain Nosler Partitions left that barrel going 2,880 fps and huddled three-to-the-inch, which was way better than needed because the M20 turned out to be a one-shot wonder. One shot and the hunt was over. From 50 yards to 400, Mel’s little rifle dropped them right in there. The stock was so perfectly designed that recoil hardly registered. I swear, each time I shot that little rifle I had to hold it out and stare at it. I wasn’t that good of a shot. It had to be the rifle. And it was.

If you’d told me 30 years ago that I’d find a single-shot hunting rifle cool, I’d have laughed. If you’d added it was chambered for the old, fuddy-duddy 7x57mm Mauser, I’d have sneered. Not anymore.

During a recent hunt with Fort Richmond Safaris in South Africa, I borrowed a Dakota Model 10 in 7x57mm and fell head-over-heels. Like that Ultra Light Arms M20, this rifle seemed to be launching heat-seeking missiles. It hardly matter that it was a single-shot because a single shot was all that was needed.

Blame this on the Dakota’s sleek, trim, perfectly balanced form. With its straight stock lines, open grip, 6-pound, 8-ounce weight, and super-short action, this Model 10 with 24-inch barrel is shorter than any short-action bolt rifle with 22-inch barrel. And it balances better than the scales of justice. Snick that little bottom lever and feel the silky-smooth breech block drop down to expose the dark chamber. Drop a 7x57mm cartridge onto the loading ramp and watch it slide effortlessly home before pressing the lever up and feeling the bank-vault lock.

Shoulder and aim this machine and it’s like shooting a recurve bow. Effortless, instinctive. The comb finds your face and you are looking right down the scope, the reticle already almost perfectly over your target. The 3-pound trigger breaks like a slim icicle and the recoil comes straight back, solid but not sharp. While the muzzle is still up, you pull that bottom lever again and the empty case pours out like water.

Fit this sweet action with a gorgeous marbled walnut stock, Talley rings, and case colored receiver and you’re definitely shooting one cool rifle. Hunting with this for steenbuck, blesbuck, warthog, and kudu was akin to grocery shopping with a stick-shift Corvette. You are in command, working the gears effortlessly, commanding the gun without manhandling it. You find yourself in concert with the rifle, feeling it respond effortlessly. You become as smooth and refined as the rifle itself. What a cool ride.

Read Next: The 15 Best Shotguns for Deer Hunting

Another borrowed rifle I had the pleasure of shooting was cool for its history as well as price tag and performance. First built in 1938 for the Maharaj Kumar of Baria, a princely state in India, this Mauser came to be sold to a U.S. collector who, through the good graces of the John Rigby company itself, allowed me to hunt with it in Zambia. With an appraised value equal to a new 4×4 pickup, you can bet this rifle inspired more than a modicum of awe and caution in me. Yet I found myself prowling buffalo thickets with due attention to the spoor and the distinct possibility that something large, black, and heavily horned could announce its bad intentions in an instant. The rifle had to become an extension of my arms. Thanks to it’s impressive balance and a bolt the flowed like the proverbial hot knife through butter, it did.

Rigby’s .416 rifle became justifiably famous because it struck a balance between too much power and not enough. Throwing a 400-grain bullet 2,400 fps from the strong, durable, fool-proof Mauser M98 bolt-action, the Rigby was the goldilocks of dangerous game rifles. Not too big, not too heavy, not too much recoil, but not too wimpy, either. It stopped everything from life-saving warthog dinner to life-ending elephant charges.

Lightly engraved and bedded to a nicely figured but certainly not ornate stick of walnut, this rifle epitomized business. Rugged, standing express sight with two folding leaves for longer ranges. Hooded front sight, barrel band sling mount, and a drop-box magazine holding four of the long, fat, comforting rounds gave the African hunter supreme firepower and confidence. A studied shooter could get off two shots nearly as quickly as a double rifle shooter and five rounds exponentially faster than the double shooter. I needed just one of Federal Premium’s 400-grain Swift A-Frame loads to end my buffalo, but you can bet I had the second chambered before the first had stopped moving.

This rifle’s 9-pound, 8-ounce mass felt much lighter than that thanks in no small part to the scope that was not part of it. An open-sighted rifle carries and feels delightfully lighter than a scoped one. And one built in 1938 and subsequently carried in pursuit of man-eating leopards and tigers — well that one is even more special.