The Nighthawk Custom President in .30 Super Carry is a premium pistol at a premium price—and it's a helluva lot of fun to shoot 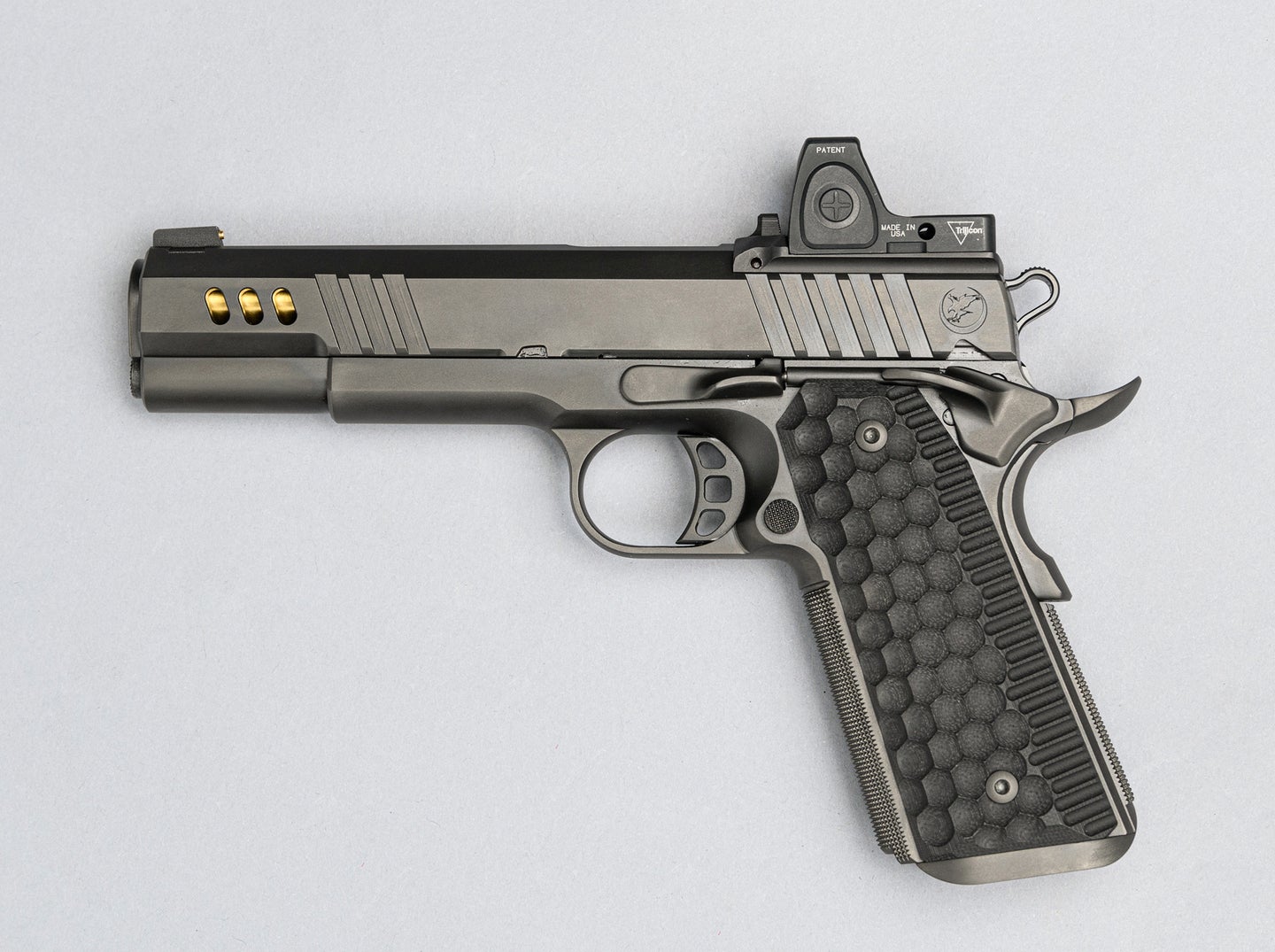 The Nighthawk Custom President is a top-shelf 1911 in the new .30 Super Carry. Bill Buckley
SHARE

At some point everyone ought to at least shoot a truly fine pistol like the Nighthawk Custom President. The more handgun shooting you do, the more you can appreciate the niceties of a finely tuned, top-class pistol.

At its premium price, the Nighthawk Custom President has much to live up to—expectations to which almost no handgun could reasonably be held. Even the high-end 1911 market is highly competitive, and anything less than perfection just won’t do. The price of this pistol does seem outrageous to most, but in the world of fine 1911 and 2011 pistols, it’s not.

We got our hands on the Nighthawk President for Outdoor Life’s review of the best handguns of 2022 at Gunsite Academy, and the one we received is chambered in the new .30 Super Carry cartridge from Federal. Our sample was also fitted with a Trijicon RMR reflex sight. At first glance, it’s a beautifully executed build. But more importantly, we wanted to see how it would do on the range.

As someone who’s more familiar with the mid-grade level of handguns, I eyed the Nighthawk Custom President somewhat suspiciously, trying to pick apart the details that might make this shooter worth more than a few extra shifts at the lumber mill. It came in a nice custom-cut, padded case, and even my peasant eyes recognized that this isn’t your run-of-the-mill 1911.

The weight of the pistol was the first thing I noticed when I picked it up. Taking more of a race-gun approach, the nearly 42-ounce pistol is heavy—which translates to stability. The slide has front and rear cocking serrations as well as some relief cuts that reduce slide weight, recoil impulse, and show off the gold titanium nitride finish of the barrel.

The slide also features angled beveling on the top edges—rather than a smooth radius that many 1911’s display. The top of the slide is flat and ribbed between the front and rear sights. The slide cuts and beveling give the pistol a handsome and modern look, while also reducing sharp edges or catching features that might make it less ideal for carry.

The Nighthawk Custom President’s controls are positive and finely finished. The bottom of the grip safety protrudes from the back of the grip for sure activation, and the wing of the thumb safety extends out to be easily disengaged—also to be utilized as a resting place for the grip-hand thumb. Even the slide stop lever is finely deburred with the operation surface extended outward slightly for more positive activation.

The front and back straps of the grip are finely checked, and the deep-pocked grip scales provide a soft but secure landing place for the palms and fingers. In a light-recoiling cartridge like the .30 Super Carry, it was sure to be a burner. The full beavertail atop the grip allows the shooter to really choke up on the pistol without worry of getting bit by the slide or hammer.

Attention to detail is where this pistol shines (and rightly so, given the price). The muzzle is perfectly flush with the barrel bushing, and the crown is recessed back from there. Even the recoil spring plug is finely checkered. Not simply an add-on, the steel magwell is incorporated with the mainspring housing as a single piece. It adds recoil-mitigating weight to the frame and aids with flawless loading of the 12-round single-stack magazines.

The Nighthawk Custom President on the Range

Our team found the Nighthawk Custom President to be a very smooth shooter on the range. All fit and dynamic function was pretty much flawless, and the pistol would certainly hold its own against any other high-end 1911.

With limited ammunition, we didn’t do any bench accuracy testing, but from a practical standpoint, the gun is a sweetheart to shoot and very precise. We shot a variety of steel at ranges out to 36 yards, and it was perfectly capable of A-zone hits (the hard way) at that range—meaning we could consistently hit the center of the “head” section of a USPSA-shaped steel reactive target.

At closer ranges, it’s a true heater. The Nighthawk Custom President is flat-shooting and butter-smooth with a great trigger. Muzzle flip is minimal, and the Trijicon RMR sight made rapid follow-up shots a breeze. A couple of us were even able to shoot clean through a double swinging spinner target at a rapid pace. At 15 yards, shooting swinging and spinning 8-inch steel plates isn’t the easiest thing to do in the world, but this pistol made us feel like champs.

The Nighthawk Custom President and the .30 Super Carry pair up as an odd couple. This pistol really stands on its own legs, and you shouldn’t read too much into the combination itself. The President would make a fine choice in 9mm or .45 ACP. But due to timing and supply chain constraints, this was the .30 Super Carry pistol that we received in time for the test.

The hottest market for handguns—and possibly all guns—is currently the micro-compact concealed carry pistol category. In the past couple years, gun companies have managed to make pistols smaller, more shootable, and with more capacity than ever before. Some models hold nearly as much ammunition as much larger compact models like the Glock G19. The latest question has been “how can we add more?”

The ingenuity of the .30 Super Carry isn’t in besting the 9mm in performance, it’s in increasing the capacity of these tiny handguns while maintaining 9mm ballistic criteria—or close to it. It’s an out-of-the-box way of addressing the issue of micro-compact capacity without dropping to the substantially lower-performing .380 ACP.

That shouldn’t be taken as a ding against the President, the .30 Super Carry does add 2 rounds of capacity to the Nighthawk Custom President versus the 9mm chambering, and it functions flawlessly. Most of the test team agreed that the gun handled and shot very much like a 9mm. A new niche cartridge in an expensive gun might not turn the cranks of most gun-buyers, but it’s great to see a company producing high-end pistols take the leap to embrace it.

What the Nighthawk Custom President Does Well

The Nighthawk Custom President fits and functions flawlessly. Everything about the pistol is built with attention to detail and finely tuned. It’s expensive, but it’s a true top-tier gun and represents a fair value. Try as we could, we were unable to find anything to knock the pistol on when it came to looks or performance.

Where the Nighthawk Custom President Struggles

The Nighthawk Custom President’s shortcomings really have nothing to do with its performance. The only tactile gripe I could come up with is that the small .30 Super Carry rounds are a little more difficult to load into the single-stack mags than comparable larger-caliber mags. The only relative weak point of the pistol we found is that it’s just not the pistol that can truly take advantage of the .30 Super Carry’s smaller diameter, so it’s a strange combo.

The Nighthawk Custom President is a fine pistol—the likes of which everyone should get to handle and fire at least once. Most consumers will choke on the price and go no further, and that’s ok. There are lots of more affordable pistols out there, and this one is built for the shooter for who wants the very best money can buy. Is this a gun for everyone? Hell no. Can we knock it in any way on performance? Also, hell no.