How to Buy a Bespoke Shotgun

A custom-fitted shotgun is expensive, but if you can afford one, it will become a family legacy to be handed down from one generation to the next 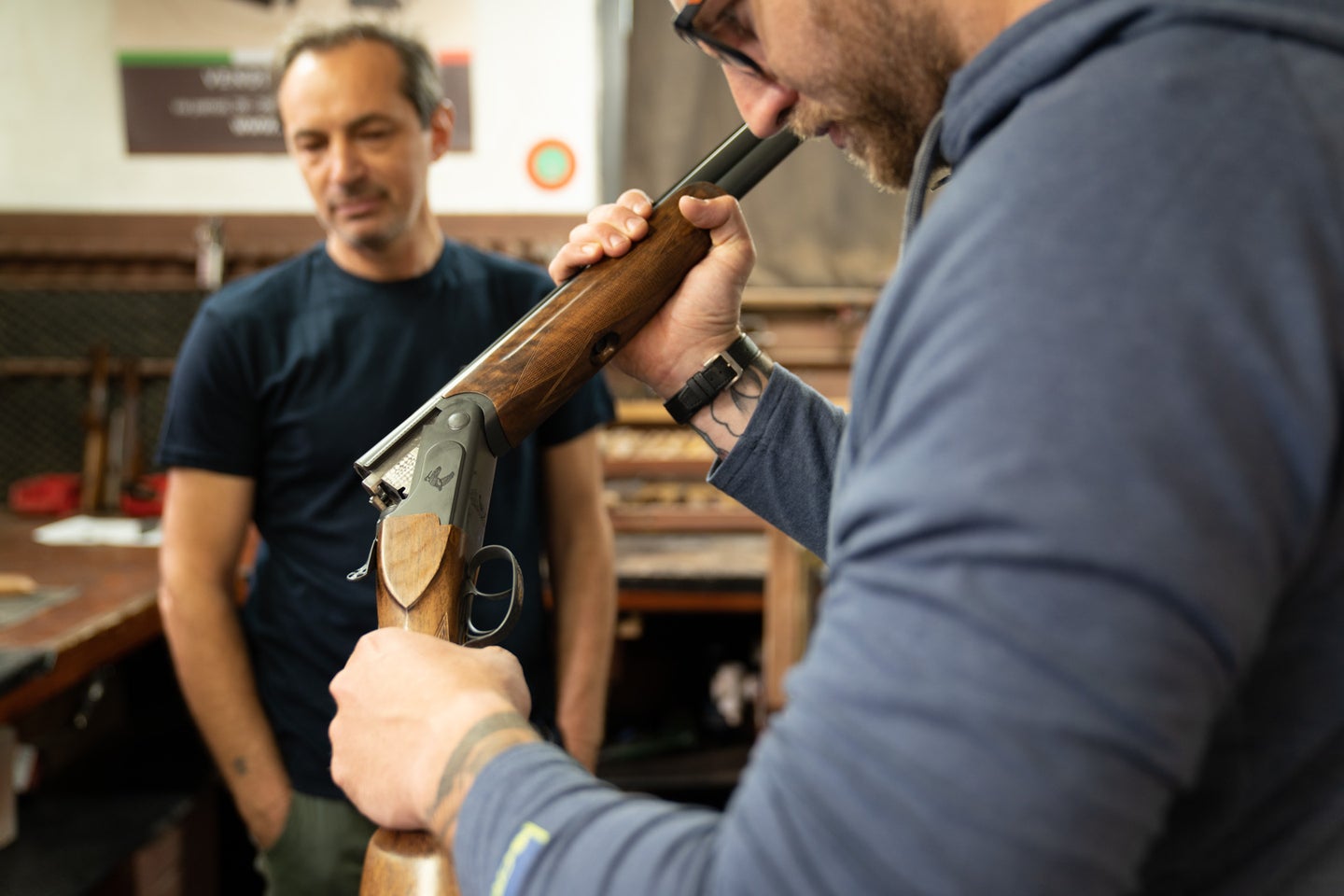 The box sitting on the glass counter in front of me looked basic enough. There was nothing particularly revealing about it after the nine-month journey that had taken me to Eibar, Spain, and now an unsuspecting gun shop in God-knows-where New Hampshire. With the reverence I held for this parcel, while any normal person would have shrugged, I may have been foaming at the mouth. Inside was a bespoke AYA No. 2 sidelock shotgun built on a Holland & Holland design.

The gun was fit to my measurements, built with the wood I had hand-selected, and engraved with my initials. Everything from the case hardening to the finish of the wood was designed to my preferences. To be fair, I could never afford a shotgun like this; this was the result of a business relationship for which I am profoundly grateful. In recognition of the fundamental idea of a bespoke shotgun being a legacy piece, this gun will never leave my family.

What Is a Bespoke Shotgun?

When asked to define a bespoke shotgun, Dan Lafond, 40-year veteran of the gun industry (CVA/Bergara BPI) and co-founder of Upland Gun Company, put it simply.

“Bespoke means handmade, made to order, one of a kind.” Lafond said. “It’s built for you and giving you choices, getting exactly what you want in a fine gun that will last a lifetime for you and then to pass down to a son or daughter.”

As I reflect on my AYA, I agree that it is exactly those things. My lifetime gun is a grouse and woodcock gun, in 28-gauge, with 27-inch barrels, fixed-choked with cylinder and skeet. Of course, I am far from the first person to try to define the perfect grouse and woodcock gun; I have certainly been influenced by many before me. In that regard, how unique or original is this gun? Who I am and what I hunt determined the design of this shotgun.

While the obvious customization like stock dimensions is unique to me, the rest of the gun tends to be unique to the game we hunt, and hence the culture that has influenced it. I would not hesitate to bring it to hunt bobwhite quail in the South, but what about sharp-tails out west? Would I have chosen differently? I would certainly think so.

The Bespoke Shotgun Market Through the Years

At the time, I thought that I had received that gun in the twilight of the bespoke shotgun market. Although AYA has experienced a resurgence in America, it is still tough to envision the landscape of bespoke shotguns—ranging from $5,000 to well into six figures—growing at an exponential rate. But Bryan Bilinski, another 40-year veteran of the shotgun business and president of Fieldsports in Traverse City, Michigan, believes the bespoke market is alive and well.

“There has always been a good demand in the U.S. for a custom-fitted shotgun,” he said. “Most of the traditional demand is answered by the Spanish gun makers like AYA, Arrieta, Garbi, Grulla, et.al. The Italian gun makers have traditionally had a smaller role in answering the demand for bespoke shotguns. For those who could afford a bespoke shotgun made in England, a custom-made gun was the standard, the fitting of the stock to the client being a paramount ingredient. English guns were rarely, if ever, made simply to stock in inventory of a gun store for potential resale someday. When I first began selling bespoke AYA shotguns, a customer could order an AYA No. 4, custom made to their measurements for $2,500. Now that same gun starts, without any upgrades or custom stock dimensions, at $5,000. If you need custom measurements, it could easily cost you another $1,000.”

Lafond weighed in as well. “I do feel the business was in decline or maybe just really flat for many years. However, from what I am seeing I think a new age of outdoorsmen and shooters have arrived on the scene and they want what they want, which includes fine shotguns and getting a gun that fits them. The ability and availability to get a fine double gun has never been better. The buyer has many choices and, as stated above, does not have to spend a ton of money to get a fine bespoke shotgun or can spend as much as the budget allows.”

The Regions of Bespoke Shotguns

When you hear the term “best gun,” that is usually referring to the bespoke fine guns of the United Kingdom. There are the famous London makers like Purdey & Sons and Boss & Co; head over to Birmingham and find Westley Richards; go even further north and you find John Dickson & Sons in Scotland. Most of these shotguns are fetching six figures and therefore unobtainable for the likes of people like myself. Even so, these high-end makers have had influence on how some other gunmakers build shotguns.

The Spanish gunmakers mentioned earlier are building on British designs, primarily the Holland & Holland sidelock and the Anson and Deeley boxlock. This is part of what has driven the popularity of the “Spanish best” guns.

Other notable gunmakers include Chapuis in France, which was recently acquired by Beretta Holdings. Then there is Merkel in Germany. While they are not the only gunmakers in those countries, they represent the brands most recognizable to enthusiasts in the United States.

Although upland hunting culture often laments that the golden age of American shotguns has died with the classic names like Parker Bros., L.C. Smith, A.H. Fox, and Lefever, that claim is not entirely true. Connecticut Shotgun Manufacturing Company still holds a strong reputation for building fine American shotguns, including the Winchester Model 21, multiple A.H. Fox designs, as well as their own custom-built designs like the RBL. All of these guns can be built to specification upon request.

One of the more unique experiences in custom built shotguns can be found in America at the hands of an Italian manufacturer. Madison Avenue, the famous street of fashion in New York City, is not the place any of us would think of when we think of the gun industry. But this is home to the iconic Beretta Gallery (one of three storefronts in the USA) where one can find a bespoke shotgun experience and even gawk at one of Ernest Hemingway’s pigeon guns.

The Beretta Gallery keeps multiple fine guns in stock with raw stocks that can be custom cut by the gunsmiths in their store to meet the demands of customers. Its rather jarring to see a square block of wood attached to a fine shotgun, but the efficiency to meet the impatient demand of the American market makes sense.

“The journey is fairly simple and straightforward. Fieldsport attempts to stock a good number of display guns to handle and inspect. Once the makes, models, and features are reviewed with a client, an order form or computer template is filled out answering all the relevant questions and needs of that client in the enjoyable search for their ‘perfect gun.’ If the client has not had a custom gun fitting in recent years, then a discussion of scheduling a date for an in-store or live-fire custom gun fitting is made. After the order is made and confirmed by the gun maker, a projection is received at Fieldsport regarding the delivered cost and projected date of delivery and then a 50 percent deposit is required to confirm the order.”

The biggest change the bespoke shotgun market has seen in a long time came in 2020 with the launch of Upland Gun Company. As the exclusive importers of RFM Italy, they brought the custom experience of building one-off shotguns online. Choose details like your base model, extractors/ejectors, single/double trigger, grip type, fore-end type, barrel length, engraving, rib types, wood grade, and so much more. The real kicker is the pricing. Their base model starts at $1,999, and includes mono-bloc barrels, pistol grip, fixed chokes, double triggers, and extractors. From there, the sky is the limit.

Lafond spoke to the idea of filling one of three segments in the market. “There are essentially three price categories in the bespoke market: $2k-$10k, $10k-$20k, $20k-$250k. We wanted to bring high-quality, custom-built Italian shotguns to market in that $2k-$10k range. In fact, we just about represent almost that whole market at that level, particularly at the level of custom service and speed we work.”

Lafond said that for many people, the wood is the key and adds the most beauty to a fine gun. I took him seriously on that and opted for the $1,150 upgrade to grade 4 wood on the Mythos base ($3,999), which is built on a dedicated small gauge frame and demi-bloc barrels. I landed at $6,525 all in. Although a boxlock rather than a sidelock, this custom-built shotgun is thousands of dollars cheaper than my AYA. This time I decided to opt for the screw-in chokes as well as the concave rib and my dog’s name engraved on the trigger guard.

Once my order was placed, I was contacted by the other co-founder, Jerry Havel, and was soon being texted images of blank wood stocks to choose from. I was shocked to learn that builds ordered in late April were coming in as soon as July and August! While every time I have liquidated my gun collection and upgraded to something new I say this is the last one, I know, like everyone reading this that my tastes may change, my “bespoke” will be different, and I will be ordering again.

Bilinski added one last comment with respect to the romantic sentiment of bespoke shotguns, leaving me to only imagine the twinkle still alive in this market.

“I see the future bright and strong for bespoke shotguns. For years and years, the production line gun industry has valiantly attempted to produce guns for Mr. & Mrs. Average American Wingshooter. For some folks, this works; for those who are not Mr. or Mrs. Average, we are left wanting. I have been conducting live-fire try gun fitting for almost 40 years, and even though a Mr. or Mrs. Average may be out there, I have never met them. No two people are alike and no two gun fittings are exactly alike. When we are all clones, then the world of custom fitted shotguns may be over… however, I’ll be long gone by then, hopefully hunting the beautiful and endless upland fields and coverts of heaven.”