The SA-35 revives the classic P-35 design, but with a few modern upgrades 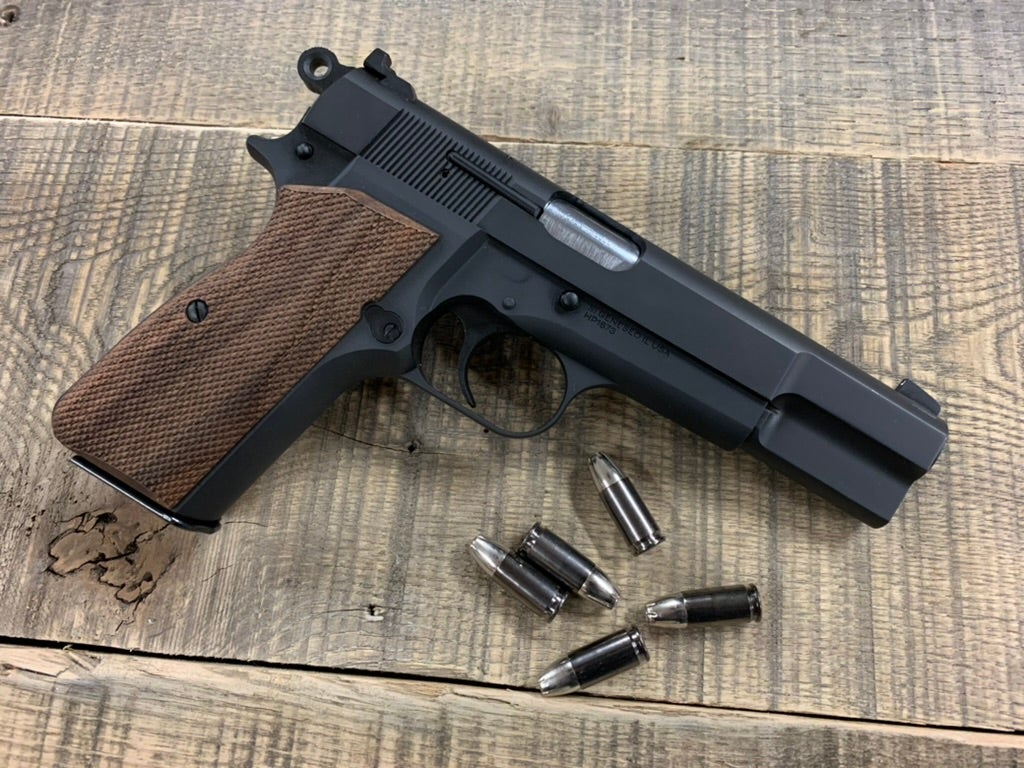 The new Springfield Armory SA-35 is instantly recognizable as a rendering of one of the most iconic handguns in history. The P-35, otherwise known as the Browning Hi-Power was based on a design by John Browning, completed by FN in Belgium after Browning’s death, and released in 1935. When most people think of WW II-era pistols they think of the 1911 and Walther P-38, but the P-35 was already in the picture and used by both allied and axis powers during the war. The design enjoyed massive success in the decades that followed, and has been used by many countries in police and military applications.

With the introduction of the SA-35, Springfield Armory’s goal was to produce an authentic version of the P-35, but with a few upgrades to help it fit the needs of the modern shooter. What they’ve come up with is a simple, clean, effective pistol that augments both the utility and legacy of the P-35.

The SA-35 isn’t flashy. Compared to many previous iterations and customizations of the P-35, it is modest in appearance. It’s plainly a P-35, the forged  carbon-steel frame and slide neatly machined and finished with an almost parkerized-looking matte blue.

It’s topped with low-profile modern sights. The front is a white dot and the rear is a serrated “U” notch. hat’s adjustable for windage and secured with a set screw. The pressed-in barrel bushing has a tight, uniform fit over the barrel with just enough clearance to for the barrel to drop during cycling, and unlike some hammer-fired semi-autos, drawing the slide back with the hammer down is a smooth, even motion. Some pistols take excessive force to leverage the hammer and get it moving and it makes for a choppier motion to cock and probably doesn’t aid in smooth cycling either.

The SA-35 has a right-handed safety that doubles as a take-down lever as in previous models. There is no de-cocker as on some other period-designed pistols, but it does have a half-cock setting. It also features an externally visible extractor, something that wasn’t on the original P-35, but was in produced on later models.

The slim, contoured walnut grips are almost entirely checkered, and they help give the pistol both a nostalgic iron-and-wood look as well as practical comfort and utility. Under the hood, the SA-35’s magazine—it only comes with one—holds 15 rounds of 9mm compared to the original P-35’s 13 rounds. I noticed a very small amount of play between the slide and frame when in battery, but it is still what I would consider tight. On the surface, it’s a pistol with clean lines, tight fit and finish, comfortable ergonomics, and it’s priced for utility.

Among the reasons I think this new take on the iconic pistol will succeed are the numerous upgrades Springfield Armory incorporated into the design. The primary upgrades include eliminating the magazine disconnect, a better-designed feed ramp, and re-designed hammer. It also incorporates slim, better-contoured grips, modern sights, and increased magazine capacity. The upgrades work with what is good about the P-35, but bring it to a level that meets the expectations of modern shooters.

The most impactful difference between the SA-35 and previous versions of the P-35 or Hi-Power is that Springfield decided to exclude the magazine disconnect. This feature did three things, none of them desirable in a modern pistol. First, it prevented the gun from being fired without a magazine in it. Second, it kept the magazine from dropping free of the gun when the magazine release button is pushed. The shooter must physically pull the magazine free. I’m sure this was originally intended as a safety feature, and possibly to prevent losing a magazine or dropping it free of the gun inadvertently. Finally, and unfortunately the magazine disconnect tended to make the trigger pull rough, gritty, and inconsistent.

Eliminating the magazine disconnect was probably the best thing Springfield could have done to bring the SA-35 up to speed with other modern handguns.

The fit, feel, and function of the original P-35 and its variants are partly what made it successful in the first place, but there’s always room for improvement. The forged-steel frame and slide are all P-35, but the inside of the magwell is slightly beveled, and it includes slim checkered walnut grips. They are comfortable, functional, and classy. Though their overall width is not much different than other P-35 grips, their smooth taper eliminates hard angles and makes them more comfortable than some of the older squared grips.

One common complaint with the P-35 was hammer-bite, where the hammer pinches the web of the shooter’s hand against the tang as it’s pushed back to its most rearward position. The SA-35 still has the characteristic round, grooved hammer, but Springfield tweaked the design to eliminate tight gap between the tang and hammer in the cocked position and reduce the likelihood of that painful side-effect.

The feed ramp has also been re-worked. Originally, the pistol was probably designed to function with 124-grain ball ammunition. With the wide variety of modern hollow-points and other defensive ammunition in use today, it’s not unusual for older feed ramps to have difficulty cycling these loads. A feed ramp designed to function with a wide variety of modern ammunition is a great update to this barrel. The P-35 originally had a feed ramp that was referred to as “humped” It started out at a very steep, or even vertical angle, then “humped over” to more of at 45-degree angle up into the chamber. The “humped” feed ramp creates a surface that can sometimes snag hollowpoints as they are pushed out of the magazine, causing a failure-to-feed stoppage. The SA-35’s long feed ramp has a wide channel and no change in angle.

The Springfield Armory SA-35 On the Range

In testing the SA-35, I fired around 250 rounds of various types of 9mm ammunition. Bullets varied between 115, 124, and 147-grain, and I fired various FMJ loads, hand-loads with mixed range-brass, Remington UMC, Federal Syntech, and defensive loads such as Federal HST and Hydra Shok, Black-Hills Honey Badger, Winchester USA Ready Defense, Browning X-Point, and Hornady XTP hollow-points. I shot primarily on USPSA target faces from 9 to 50-foot distances, with some supported shooting at 50 ft.

Ideally for range testing of something like the Springfield Armory SA-35, I’d have an original P-35 or Hi-Power to compare it to. Although I have shot them before, I don’t have one. Instead, while running the SA-35 through its paces, I alternated shooting with the pistol I currently carry, a P35(p), more properly known as the VIS 35 or simply Radom. Introduced in 1935, the same year as the P-35 or Hi-Power, it’s a Polish-designed 9mm, and a hybrid-copy of a pre-production version of the P-35 that also incorporates some 1911 features. It’s not exactly comparing apples to apples, but they share several key similarities in design and some features are almost identical. After receiving one that my grandpa brought back from World War II, I found it to be such a nice-shooting pistol that I had to hunt down another one to use and carry. The VIS 35 I have was produced under Nazi occupation, and in lieu of an original P-35, it provided a good reference point of a very similar design.

With its contoured-grips, the Springfield Armory SA-35 is a comfortable pistol to hold and shoot. At the widest point of the grip, it’s 1.32 inches wide. It’s basically identical in width to my VIS 35’s plastic grips, but with almost double the capacity and a shorter frame front-to-back. My only point of discomfort was on the left corner of the tang while choking up to allow my thumb to ride the safety. It’s got enough of an edge to be noticeable compared to the fully-rounded tang on my VIS 35, but I didn’t find it to be detrimental to my shooting, nor did I experience any hammer-bite (which I have with my VIS 35). I found the SA-35 to be soft-shooting with a smooth, controllable recoil cycle—smoother than that of my VIS.

Springfield’s wide-channel, improved feed-ramp seemed to do the trick for reliability, because in 250 rounds of a wide variety of modern hollow-points and other defensive ammo, I didn’t experience a single malfunction. The feed ramp might seem a moot point, but I can fully understand how an older-style ramp would cause feeding issues with many modern defensive loads. It certainly did with my VIS 35. My grandfather’s VIS 35 feeds hollow-points beautifully, but I immediately noticed that they would stick on the bottom of the feed-ramp in the VIS 35 I purchased. My grandfather’s barrel had a fully-machined feed-ramp top to bottom, but the second barrel’s feed ramp almost didn’t exist, creating a similar shape to the “humped” feed ramp in early P-35’s, and a surface that would snag every hollowpoint. Some careful file-work and polishing took care of that reliability issue, but the factory feed-ramp in the Springfield SA-35 is superior in every way.

Aside from the knucklehead with his paws wrapped around the grip, a good trigger and good sights are probably the most important attributes of an accurate handgun. Partly due to the elimination of the magazine disconnect, the SA-35 has a much better trigger than any P-35 I’ve ever shot. It’s got a light, smooth take-up, and a crisp break at 4 pounds, 10 ounces according to my scale. Many of my handguns tend to break at 5 to 6 pounds. It has a bit of a delicate reset, and it can sometimes be easy to miss during rapid shooting if you’re trying to minimize trigger movement and just catch the reset. It takes a little getting used to.

The Springfield SA-35 isn’t a bullseye pistol, but it’s easy to shoot with acceptable accuracy. From a supported position on sandbags, I could pretty much keep groups of 5 shots inside the bull on a B2 slow fire target at 50 feet. Although the sights don’t clash with the style of the pistol or compromise that classic look, they are more robust and visible than the iron sights of the 1930s[JS1]  (like my VIS 35 has) and some of the large adjustable sights sometimes seen on later P-35’s. They are fast to acquire, and quick to get on target and easy to transition between targets.

What The Springfield Armory SA-35 Does Well

The SA-35 makes the P-35 better, at an affordable price. The updates give the classic design a more modern level of performance and function. It’s got a great grip profile, good sights, and nice, clean-breaking trigger.

Where the Springfield Armory SA-35 Is Lacking

Some P-35/Hi-Power Models included an ambidextrous safety, this one doesn’t. I’m right-handed, but I know some lefties would have appreciated that inclusion. I’d also like to see it come with at least 2 or 3 magazines, not one. It’s a $700 pistol, throw in another mag or two.

There is something to be said for time-proven designs and pistols made of steel and wood. The Springfield Armory SA-35 has them both. With some smart changes to the original design and a simple finish, it’s not meant to be a showpiece. The SA-35 looks ready to be issued. It’s a no-frills, clean P-35 that’s reliable and meant to be used. If you want P-35 to sit under glass, get something else. If you want one to shoot, the SA-35 is tough to beat.