On paper, the Mossberg MC2sc is right at the top of the micro 9mm pack in capacity and features, here's what we think after using it 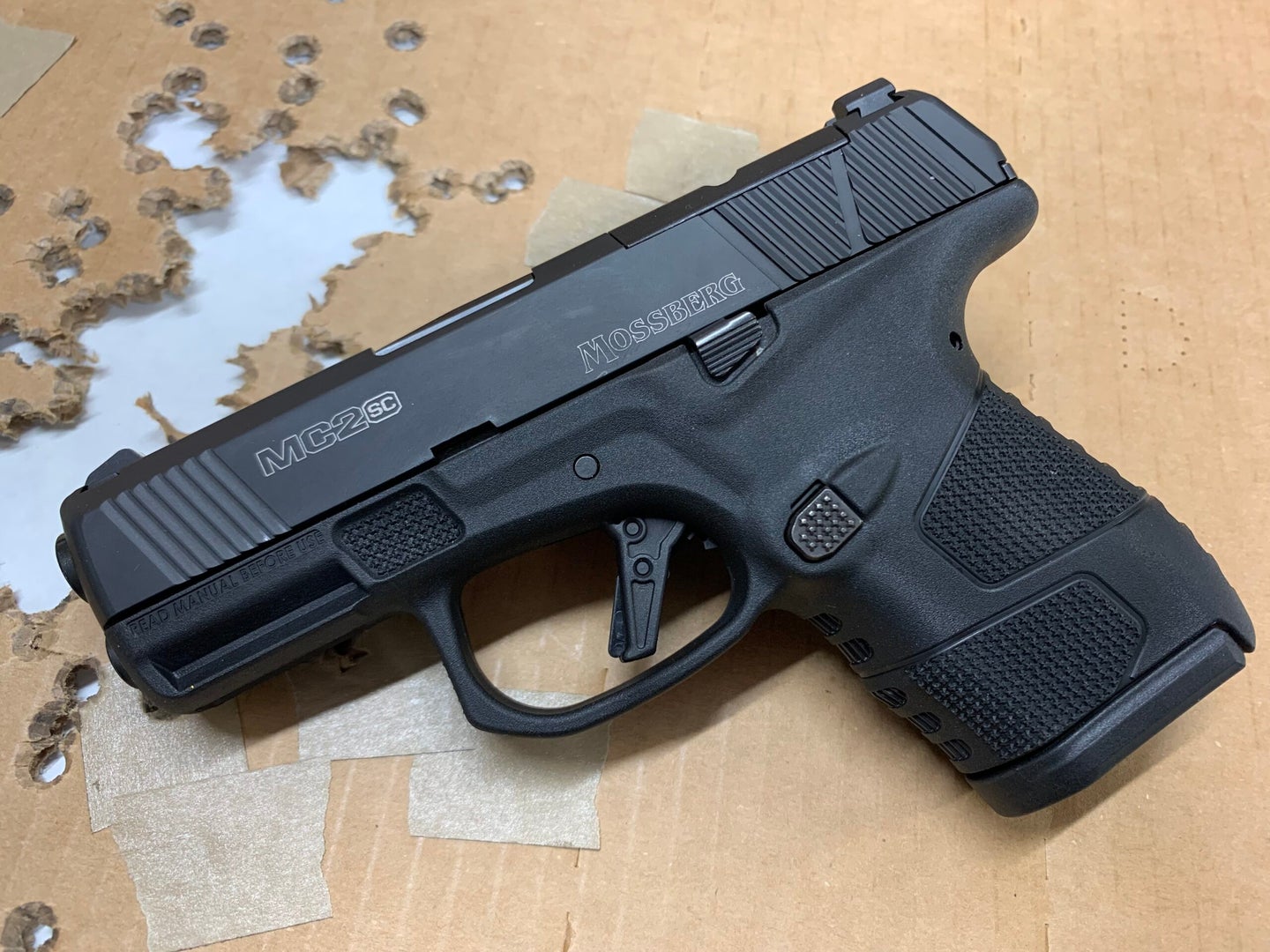 The MC2sc is compact, has great capacity, and is ready for an optic and light. Tyler Freel
SHARE

Mossberg has been edging into the handgun category recently, and the new MC2sc brings them right into the heat of the micro-compact 9mm pistol market. In 2019, Mossberg introduced their first pistol in a hundred years—the MC1sc—but in today’s age of handguns, you’ve got to update to stay relevant.

The new Mossberg MC2sc looks a lot like the MC1sc at first glance, but it’s packed with improvements—particularly in capacity and accessory compatibility. It’s a pistol that’s designed to be unobtrusive and concealable while packing a formidable firepower. The MC2sc also differs from Mossberg’s new MC2c in that it’s more compact. They are very similar pistols, but the MC2c holds an additional two rounds in its flush magazine, and has a longer barrel and handle. The MC2c can also be distinguished by the cross-slot in it’s rail—something the MC2sc doesn’t have.

On paper (and at the gun store counter), the Mossberg MC2sc cuts the mustard right alongside popular micro nines like the Sig Sauer P365 and other newcomers like the Smith & Wesson CSX. It’s a very comfortable pistol in the hand and the front of the grip is contoured to a gentle point with subtle finger grooves.

First impressions and features are important, but they aren’t everything. The MC2sc would need to prove itself on the range for me to truly consider it competitive with a plethora of other compact options.

Key Features of the Mossberg MC2sc

The most notable selling point for the Mossberg MC2sc is its capacity. It comes with two magazines, one that fits flush and holds 11 rounds, and a 14-round extended magazine with grip sleeve. Companies are constantly working to maximize capacity, but the MC2sc is near the top of the field.

Another notable feature of the Mossberg MC2sc is that it comes standard with an optics-cut slide and cover plate. The optics cut is a standard Shield-pattern and will fit a variety of optics. The slim 0.9-inch-wide slide is a perfect platform for the growing field of tiny reflex sights. The cover-plate is a steel Strike Industries design and matches the profile of the slide perfectly. The only trouble I had with removing the plate to mount an optic was a screw head that stripped the instant I put any torque on it. The problem was easily remedied with a screw extractor.

Along the lines of accessory compatibility, the Mossberg MC2sc also features a rail for mounting a light or laser. The rail is another upgrade from the MC1sc—and it’s similar to rails on the Sig P365 and Kimber R7 Mako in that it doesn’t have any cross-slots. A compact light would be a great addition to this pistol.

The slide stop is oriented for right-handed shooters, but the magazine catch button is reversible. The grip features the same shape and stipple-texture pattern that the MC1sc had, but an additional concave textured spot was added just behind the accessory rail to give some support-hand thumb traction.

Under the Hood of the Mossberg MC2sc

One of the most unique things about the Mossberg MC2sc pistol is its disassembly procedure. To disassemble, you lock the slide to the rear, then press a button on the back of the slide plate to remove it. The striker assembly is then removed, and the slide can be slowly released and removed from the frame without pulling the trigger. There are apparently still people who accidentally shoot themselves while field stripping their pistols, so kudos to Mossberg for making the process even safer.

The MC2sc is a simple pistol and being able to remove the striker assembly only makes it easier to clean and inspect. It also makes it a little easier to clean out the slide. The pistol has a relatively beefy extractor which aids in reliability and sure ejection with any ammo—9mm cases tend to have some variation in the exact shape of the case rim depending on the manufacturer.

Simple often translates to dependable and that seems to be the case here. The MC2sc is based on an uncomplicated design, which makes the gun easy to maintain. The steel forward slide rails are long and tapered on the front and rear to reduce friction. The rear slide rails are also steel and are part of the ejector itself.

The Mossberg MC2sc On the Firing Line

The Mossberg MC2sc fits my hand very well and I find the texturing design and location to be a good balance of traction and comfort. However, I was a little surprised at how snappy the pistol’s recoil was initially. Some micro nines like the Smith & Wesson CSX and Savage Stance seem to shoot incredibly flat, but the MC2sc has a little more pep to it with the same ammunition.

I had no problem taming the pistol’s recoil, it just required a little bit more focus on grip. I did find that it was very difficult to keep the recoil from dislodging my support-hand thumb from the textured thumb pad located behind the accessory rail—ultimately only a minor inconvenience.

I didn’t experience a big difference in controllability when using the 11-round magazine as opposed to the extended 14-rounder, but I’d like to see a tighter fit between the grip sleeve and grip. The extended magazine improves the comfort of the grip, but I could feel some wiggle in the magazine, and it was distracting. Both magazines functioned without issue.

One thing I really like about the Mossberg MC2sc is the sight picture when I bring the gun up. The standard model I got has white 3-dot sights, and the beveled top edges of the already-thin slide present a great sight picture—both with irons and a red-dot. Looking down the sights, the shape of the slide directs my eyes right to the sights. I found it faster to acquire a good sight picture with the MC2sc than with several other pistols.

The MC2sc has a notably nice trigger as well. It breaks at 5 pounds, 8 ounces on my Lyman trigger pull gauge. The trigger pull isn’t exceptionally light, but it’s smooth with a relatively crisp break. There’s a little bit of movement after the slack is taken up and before the break, but it’s good for this class of pistol. The reset isn’t outstanding, but it’s good. It has a bit of travel from the backwall, but great spring tension pushing back to the reset—and a very tactile click.

I fired approximately 300 rounds of ammo through the MC2sc and experienced one malfunction—a misfire that showed a shallow primer dent and the cartridge fired on the second go-round. I fired a mix bag of range ammo and defensive ammo including Remington 115-and-124-grain FMJ, Federal Premium Syntech and 124-grain HST JHP loads. A-zone hits on a USPSA target at 50 feet were no problem with the Mossberg MC2sc. With a good grip, quick magazine dumps at 10 and 15 feet were easy to keep in the center as well.

After testing, I noticed more finish wear than I’d expect on the barrel and slide. Finish wear at many of these contact points is totally normal within a few hundred rounds, but it’s still notable. The only point I find unsatisfactory with the pistol is the amount of play between the slide and frame after break-in—particularly at the muzzle. Some amount of play is normal, but the pistol I have has enough play to be noisy. This doesn’t seem to affect the performance or reliability in a tangible way, but it’s annoying.

Where the Mossberg MC2sc Excels

The Mossberg MC2sc has great ergonomics and accessory compatibility, and a good trigger. It’s comfortable to carry and shoot, and sports great ammo capacity. The pistol might not be best-in-class for any single attribute, but it’s near the top in many of them. It also comes in at a lower price than many competitors.

Where the Mossberg MC2sc Could Use Improvement

Fit is my only gripe with the Mossberg MC2sc. I’d like to see a tighter fit with the extended magazine and sleeve. I’d also like it to have a tighter frame-to-slide fit after break in.

Final Thoughts on the Mossberg MC2sc

Any new pistol in the micro 9mm category starts with an uphill battle to distinguish itself from competitors. The field is so deep that without exceptional uniqueness or a strong aggregate of features, a pistol is sure to flop before production ever begins. However, the Mossberg MC2sc does distinguish itself, in my opinion. I don’t find it flashy or fancy, but damned if it doesn’t do everything well. You’ll probably be able to find them for a hundred bucks less than MSRP and that means it will be more than a hundred bucks cheaper than relative competitors in its class. For the price, it’s a great pistol.