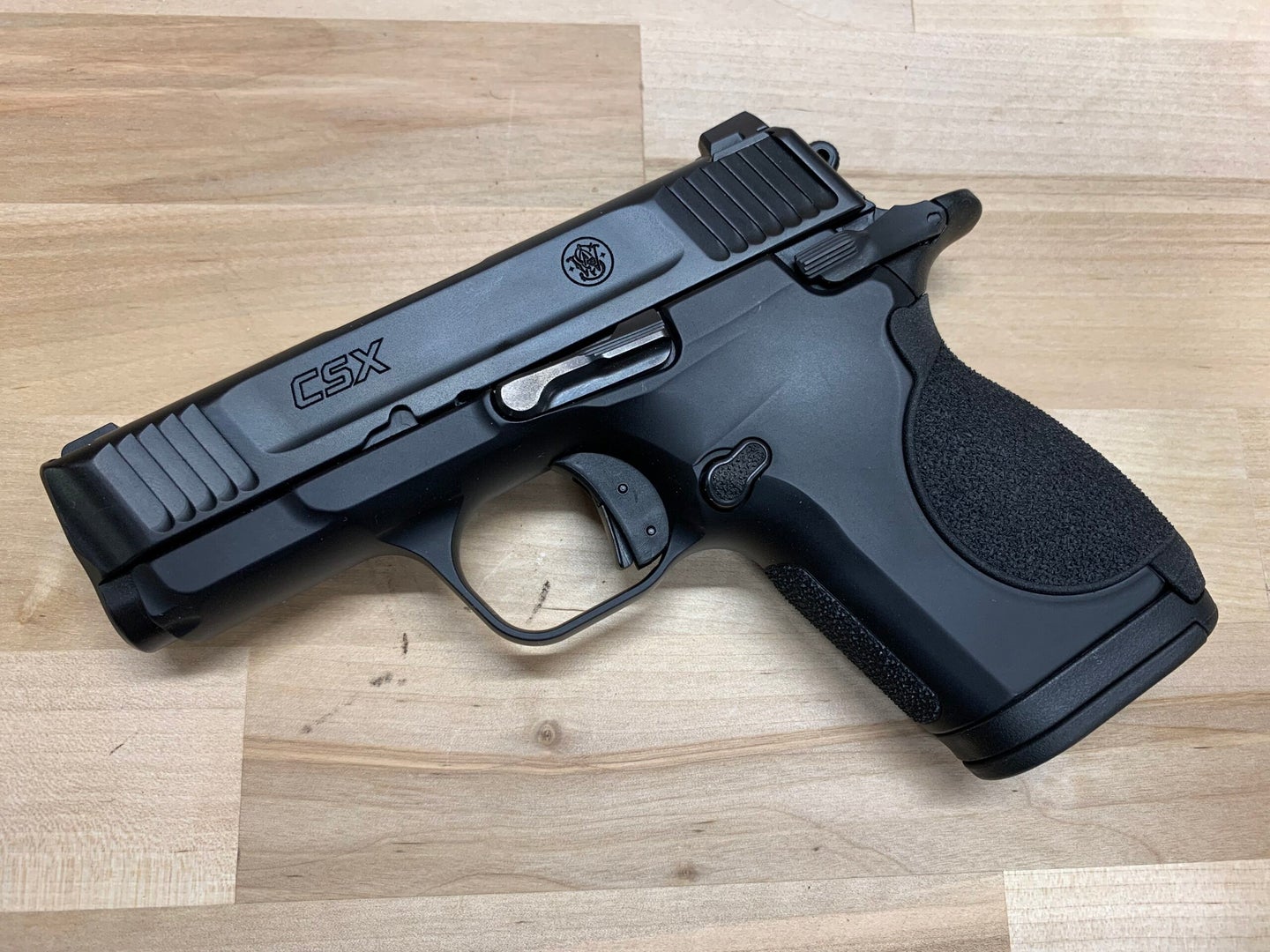 The new CSX from Smith & Wesson is an aluminum-frame micro 9mm that holds up to 13 rounds. Tyler Freel
SHARE

The Smith & Wesson CSX is one of the latest micro 9mm pistols to hit a crowded market, but it has some unique design features that will help it stand out. It’s an all-new, hammer-fired pistol with an aluminum frame and 13-round capacity. The CSX is tiny and capable. It makes some key departures from the designs of other Smith & Wesson pistols like the M&P series.

There’s an arms race in the current handgun market that’s all about fitting copious amounts of ammo into tiny packages. Smith & Wesson already had a relevant contender in the market with their year-old Shield Plus model, but they’ve taken things a step further with the CSX.

On paper, the CSX isn’t much smaller than the Shield Plus, but a new frame, magazines, and hammer-fired design makes for one of the best size-to-capacity ratios on the market. The CSX is tiny, virtually identical in size to a single-stack Kimber Micro 9 1911 and Springfield Armory’s popular Hellcat. Smith & Wesson’s website lists the height of the CSX as 4.6 inches, but the one I got measures just under 4.5 inches from top of sights to bottom of magazine (with the 12-round magazine).

The CSX is far more than a line extension. It’s newly designed from the ground-up as a micro carry gun. It sports clean ergonomics, beveled edges, and low-profile controls. It has aggressive but snag-free cocking serrations at the front and rear of the slide, as well as slightly wider cocking tabs at the rear. It includes an ultra-compact 10-round magazine as well as a slightly longer 12-round magazine.

The biggest break from the pack of current competitors is that the Smith & Wesson CSX is built on an aluminum frame that features a grip texture panel on the front, and interchangeable polymer grip panels on the back. The texture on the panels is fine and abrasive, like 36 grit sandpaper.

The grip panels give the otherwise smooth aluminum frame a comfortable and secure grip, even with sweaty hands. The pistol comes with a palm swell-type backstrap installed, but you can easily swap it for the included slimmer minimalist backstrap. Both backstraps provided excellent traction for my hands and the pistol is comfortable to hold.

Aluminum is a softer metal than steel, but it works well in this pistol. After shooting about 300 rounds, I didn’t notice any alarming or unusual wear between the stainless-steel slide and the slide rails on the aluminum frame. Doubters ought to be reminded that most AR receivers are aluminum and they’re able to withstand years of abuse and interfacing with moving steel parts. With the CSX, you get a metal gun that is compact and lightweight, with an excellent grip.

The Smith & Wesson CSX diverts from the most-common micro 9mm pistols in another way: it’s hammer-fired. Both striker and hammer-fired pistols are reliable but being a hammer-fired pistol allows the CSX to have a more compact slide and a crisp, short-pull trigger. An external hammer also gives a shooter the option to carry in a half-cock position if they desire.

Upon close inspection, the CSX is more akin to a 1911 than most other micro 9mm pistols. Calling it a 1911 variant would be a stretch, but it shares key similarities with some small 1911’s such as the barrel and takedown pin, long slide rails, ejector, and generally 1911-esque controls. The controls are all low-profile, but easy to operate.

The Smith & Wesson CSX field strips like a micro-1911, with the slide stop lever doubling as the takedown pin. It utilizes a self-contained recoil spring and guide rod and the barrel and feed ramp are similar to some micro 1911’s. The CSX uses a large external extractor like what you’ll see on many striker-fired guns, which aids with reliability.

The function and feel of the thumb safety is like a 1911, but smoother to operate because the pivot point for the safety lever is farther back on the beavertail. It requires less force to operate than shorter levers. I have relatively large hands and the pad of my thumb extends well beyond the safety lever. Some thumb safeties are tricky to disengage without breaking grip, but the CSX’s safety is easily disengaged with contact on the side of my thumb, just by pressing down.

Another notable function of the thumb safety is that it is operable regardless of whether the pistol is cocked or not, and having the safety engaged doesn’t prevent the slide from moving. You can manipulate the slide to load, unload, or check the chamber with the safety engaged in the “ON” position. You can also engage the safety before cocking the hammer. If you prefer not to use the thumb safety at all, you’ll likely find its presence unobtrusive.

How the CSX Handles on the Range

Compact and Micro-compact carry guns have made great leaps in their shoot-ability in recent years. The first micro carry gun that I bought—it was certainly micro at the time—was a Kahr CW9. It was a sweet little single stack 9mm pistol, but boy did it seem flippy and difficult to control. Shooting the CSX is a different story.

I don’t have that CW9 anymore, but for comparison, I shot my CSX alongside one of my favorite micro-9mm’s, my Kimber Micro 9 Triari. The pistols are nearly identical in size, with the grip of the CSX being slightly thicker due to the double stack magazine. The Kimber is easy to control for its size, and I’ve found it to be less-snappy than some other pistols such as the Springfield Hellcat.

I fired the CSX using both the palm swell and minimalist backstrap and found it to be delightfully comfortable to shoot for a pistol of its size. Recoil management was easy, and it felt as if the sights were never flipping up off the target during the recoil cycle. I’ll often refer to my Kimber Micro 9 as flat shooting, meaning it has minimal flip up from the target at the shot, but the CSX was even better.

I’d attribute the CSX’s shootability to a couple of things. First, it’s a comfortable grip and the texture panels certainly help with that. Even with the 10-round magazine—which doesn’t leave room for my pinky—I didn’t have any weakness or movement in my grip on the gun. Second, the gun allows a very high, close-to-bore-axis grip. When choked up against the beavertail on the CSX, the top of your grip is only about 0.8 inches below the center of the bore. On my Kimber, you’re almost 1.25 inches below the center of the bore. The felt difference is notable.

Practice and good recoil control will make shooting any handgun easier, but I was impressed with how well the Smith & Wesson CSX handled out of the box. With less mass, the CSX’s slide likely helps with perceived recoil as well. There is recoil, of course, but with a good grip on the gun, cycling felt more like a micro compact .380 (like the LCP Max) than a 9mm.

The Smith & Wesson CSX has a medium weight, but very crisp trigger with almost no travel. I measured the trigger on my sample at 5 pounds 12 ounces. Many carry pistols suffer from an excruciatingly long take-up, but not the CSX. It has a small trigger-bar style safety device, and when compressed, the trigger has a flat—almost backward-angling—shape. The gun is small, so finger placement is important for accuracy, but it’s a nice trigger.

I fired approximately 300 rounds of various types of ammo through the Smith & Wesson CSX without any function issues. Approximately half of that was 115-grain FMJ handloaded ammunition in a mix-and-match variety of range brass. I also tried several defensive loads such as Federal Premium 124-grain HST, Winchester 124-grain USA Ready Defense +P, and Federal Premium 147-grain Hydra-Shok.

The sights on my CSX were steel dovetail-mounted white dots and easy to acquire in my sight picture. The rear sight features a set screw and is adjustable by tapping left or right. Mine needed a little adjustment at 50 feet—an issue that was quickly remedied.

I did most of my shooting on USPSA cardboard target faces and although I didn’t find the CSX to be especially accurate at 50 feet, a rapid cadence would keep a group roughly in the A-zone. At a more-likely defensive distance of 10 feet, the manageable recoil of the CSX helped me keep groups in the A-zone, shooting as fast as I could pull the trigger.

What the Smith & Wesson CSX Does Well

The CSX is a great example of efficient use of space. It manages to pack a great round count into a tiny little package, that also happens to be exceptionally easy to control.

What the Smith & Wesson CSX Could Do Better

I’d like to see a little bit more spring tension to return the trigger to its reset. The trigger has a lot going for it, and that little change would help it reach its potential. When loading the 12-round magazine, I had to take care not to pinch the palm of my hand between the magazine and grip. Also, the grip sleeve spacer on the 12-round magazine had a very loose fit and would likely get lost eventually.

Read Next: The Best 9mm Ammo

The Smith & Wesson CSX is the most manageable, easiest shooting micro-9mm pistol I’ve tested. It’s a great optimization of a minimalistic carry gun with a lot of rounds packed into a tiny platform. In a highly competitive field, this pistol excels.