A rundown on the best new gear for backcountry hunters 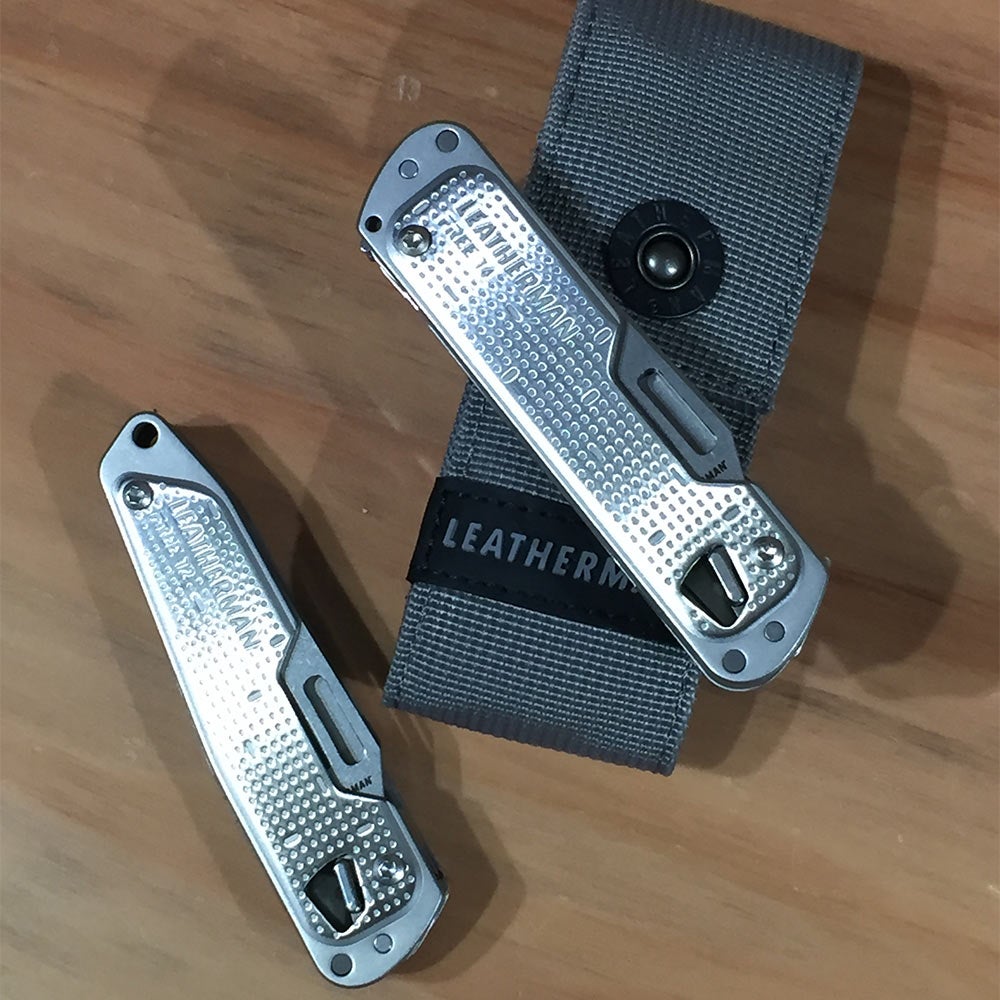 Gear that defines the ethos that less is more dominates 2019 offerings for backcountry and minimalist hunters. Here’s a look at gear that’s strong, light, and compact (and in many cases, pricey, especially when you consider the cost per ounce), and begging for a place on your next go-long hunting trip.

Nosler waited a spell to join the ultralight rifle market, but this perfectly balanced, accurate, and tough debut, based on the dependable square-bottomed Model 48 action, is built for the wilderness. The aramid fiber stock—better known as Kevlar—mates up to a pillar-bedded action and then to a 24-inch carbon-wrapped barrel. The whole business weighs just 6 pounds and Nosler promises sub-MOA accuracy with prescribed loads. It’s available in short-action 6mm and 6.5 Creedmoor and long-action Nosler-designed calibers 26, 28, 30, and 33 Nosler along with .300 Win. Mag. Retailing for $3,140, it’s priced to appeal to serious hunters who want a lightweight, custom rifle but don’t have 10 grand to spend. www.nosler.com 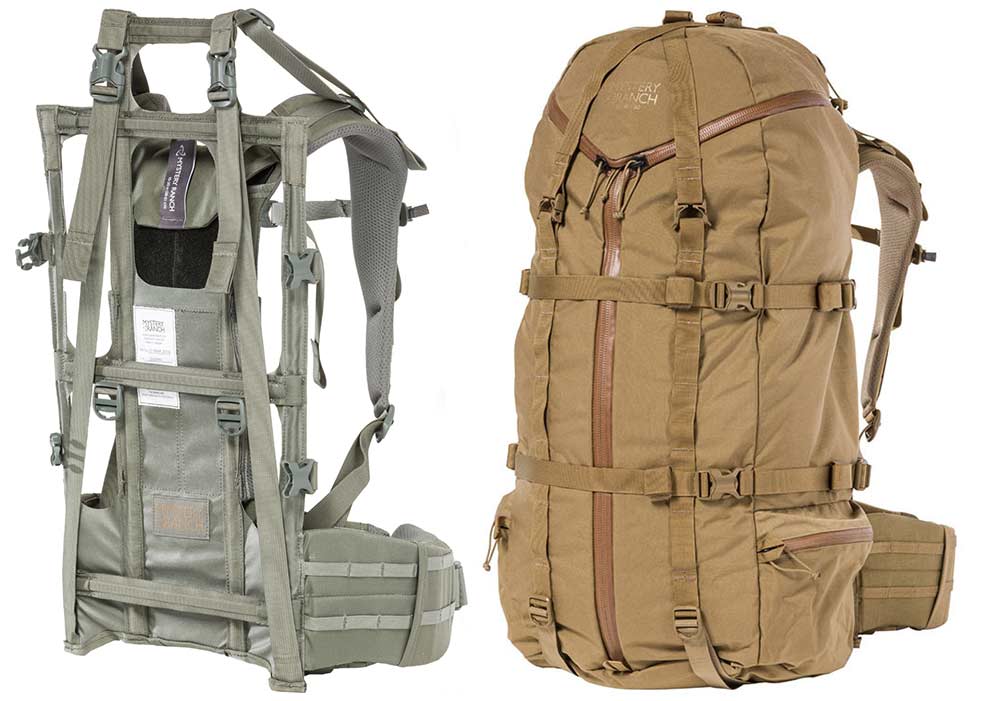 There’s only one way to comfortably haul spine-compressing amounts of weight—use a well-fit pack. Mystery Ranch has built its business on frames that can be adjusted to the individual physiques of its users. This year the Montana-based company has a new, lighter, and more flexible frame that stabilizes heavy loads and, thanks to a beefy, articulating waist belt, distributes weight evenly across the hips and pelvis. Three new bags—the 45-liter Sawtooth, the 85-liter Beartooth, and the 62-liter Selway—fit the frame and allow you to match the capacity and attributes of the bag to your specific hunt, and average $500 apiece. www.mysteryranch.com

You won’t see them just yet, but later this year Leatherman will debut a pair of everyday-carry tools that have plenty of utility for backcountry hunters. Called the Free T series, the T2 is an 8-tool folder built around a 2.2-inch 420-steel blade. It includes an awl, three screwdrivers, a mini pry bar, box cutter, and bottle opener. The T4 adds scissors, tweezers, a file, and a micro screwdriver to the mix, and all tools open and close with magnetic keepers, which reduces the tension required to deploy them. Best part: the weight. The T2 weighs just 3.3 ounces; the T4 tips the scales at 4.3 ounces. Second-best part: the price. The T2 will retail for $40 and the T4 for $60. You’ll see them in stores this summer. www.leatherman.com

Think of this as an ultra-compact lifeline from anywhere to anywhere. Originally a Delorme product, the satellite-connected inReach has been on the market for a few years and enables users to text or signal for help even if they’re well off the grid or out of cell service. This year Garmin has sized it down. The 3.5-ounce water- and shock-proof Mini offers all the capabilities of the grown-up version, including the ability to send and receive text messages, track and share your journey, and trigger an SOS alert. Additional amenities include weather reporting, device connectivity, and unlimited data storage in the cloud. The unit costs $350, and you’ll also need a service plan through Iridium, but you can activate or cancel service as needed. www.garmin.com 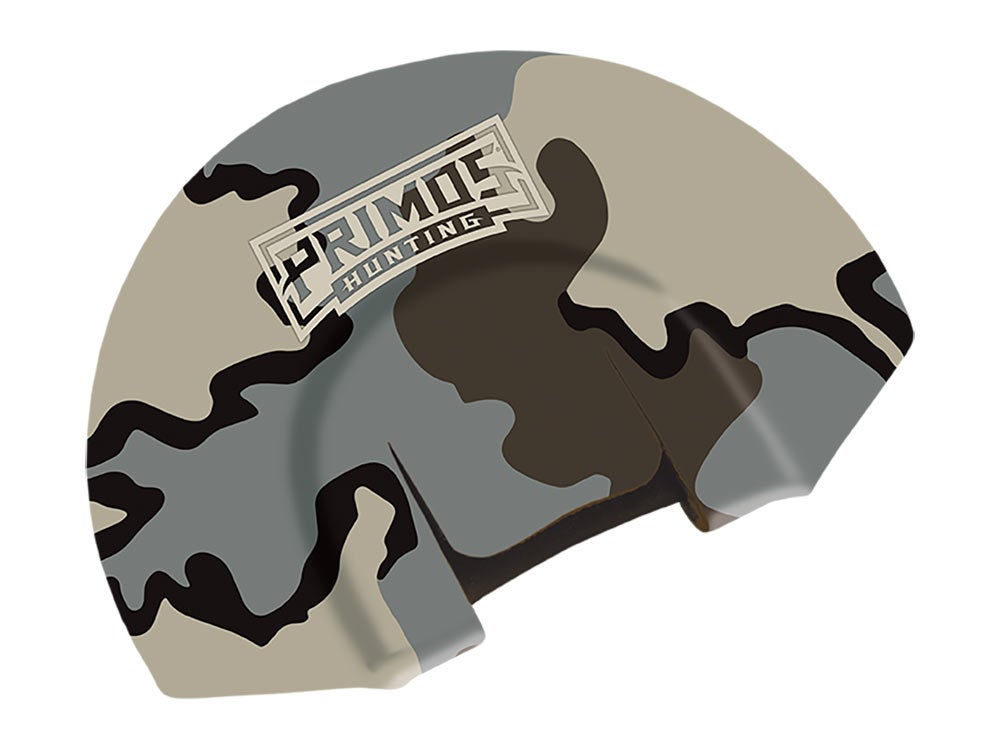 If you thought camouflaged underpants was the very definition of superfluous, this elk call clad in Kuiu’s alpine Vias pattern may reset your expectations. It’s designed to complete the wardrobe of any backcountry badass, though it may also be easily lost if you happen to leave it anywhere but the roof of your mouth. Available in raspy cow, mature bull, and challenging bull tones, each call costs $14. www.primos.com 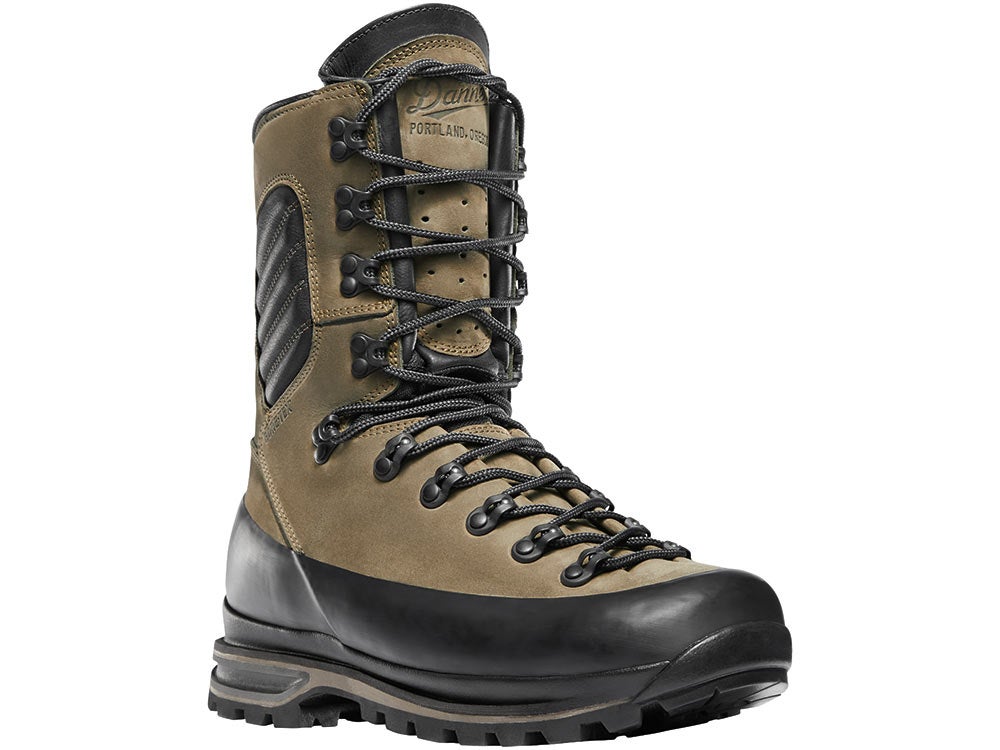 Danner is expected to release its first purpose-built mountaineering/hunting boot later this year. Called the Thorofare, the full-grain leather upper is built with a one-piece vamp and features a full rubber rand for protection from the elements. The ball-bearing lacing system allows users to customize the fit, and a GORE-TEX liner is both breathable and waterproof. The business end of the boot features a Vibram Tsavo outsole and Danner’s patented rigidity system for support from the toes to the heel. Cost is expected to be about $500, and unlike most of its competition, who source boots from Italy, the Thorofare is built in the US. www.danner.com 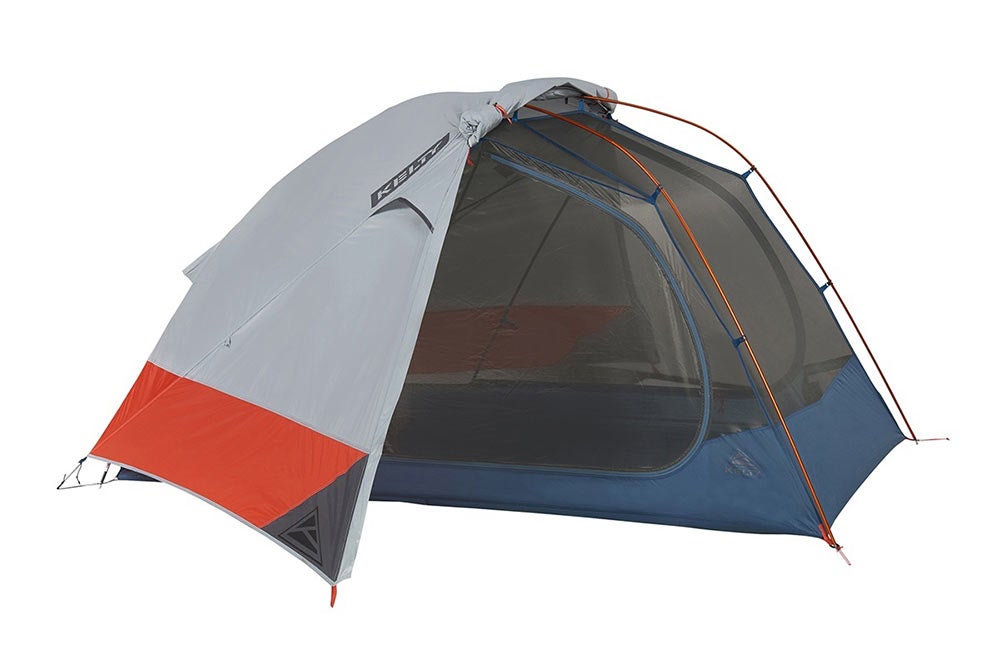 Most ultralight tents are way more fun to carry than they are to inhabit. Low ceilings, tight sidewalls, and fragile poles and zippers make them inhospitable, especially after long sessions in cold, windy, rocky backcountry haunts. This spacious new 3-season, 2-person tent from Kelty won’t make the rocks any softer, but it will give you room to spread out. Twin vestibules give you places for your gear and the hubbed aluminum poles set up quickly. It weighs a pound more than most ultralight offerings, but at just over 4 pounds, give half the weight to your buddy and you’ll both sleep better. At $260, the price is nice, too. www.kelty.com 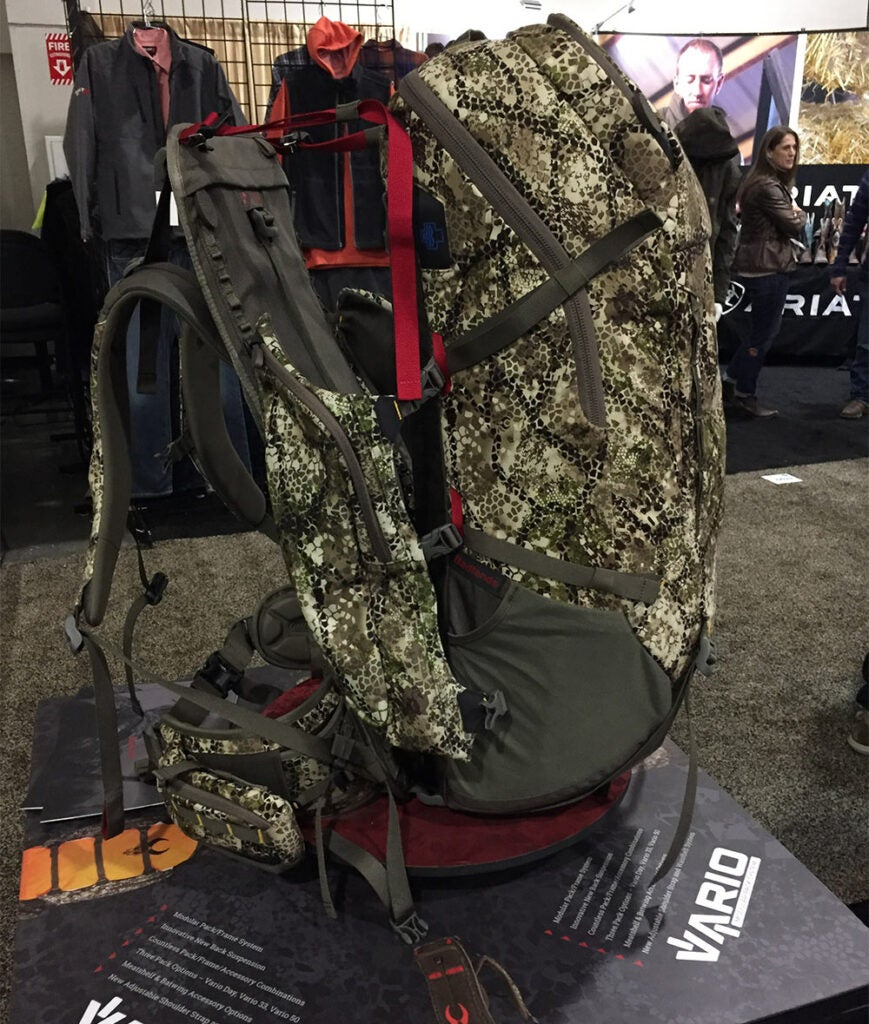 Mystery Ranch isn’t the only outfit with a modular backcountry pack. Badlands introduced its Vario pack system at SHOT, built around a body-hugging frame in either medium or large sizes. The frame includes a heavy-duty meatshelf that occupies the space between the bag and your back, keeping heavy loads close to your center of gravity and minimizing torsion. Pack choices, all of which fit the Vario frame and all of which feature Badlands’ proprietary Approach camo pattern, include a day pack, the Vario 33 (3,300 cubic inches), Vario 50 (5,000 cc), and Vario 65 (6,500 cc). Other modular components also fit the system, so you can add totes, optics pouches, or accessories as you need. Prices range from $350 to $500. www.badlandspacks.com 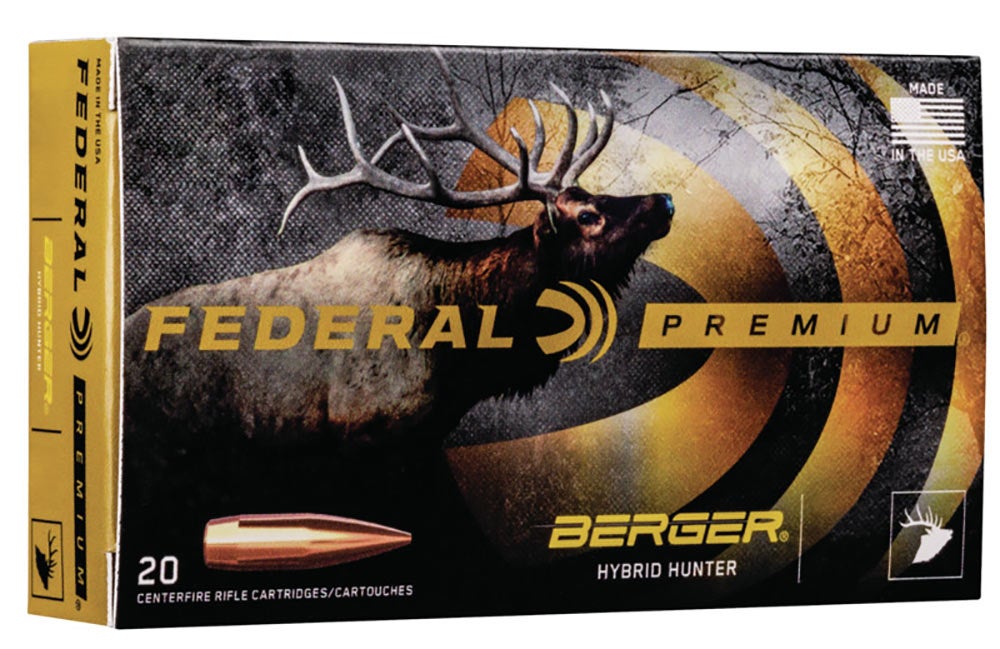 Over the past decade, Federal has lost its edge in big-game bullets – to the likes of Hornady, Barnes, and Berger. This year Federal is making a big play to reclaim lost ground, in part by co-opting the performance of its rivals. One example is the new Federal Premium Berger Hybrid Hunter, which pairs the high ballistic coefficiency and ogive of Berger’s long-distance match bullets with premium components from Federal. The bullets, available in 10 calibers, from .243 Win. To .300 WSM, open reliably on medium and large game at a wide range of velocities, making it a great choice for backcountry hunters who sometimes have to shoot across wide open spaces but often have closer-in shots. Cost is about $40 per box. www.federalpremium.com 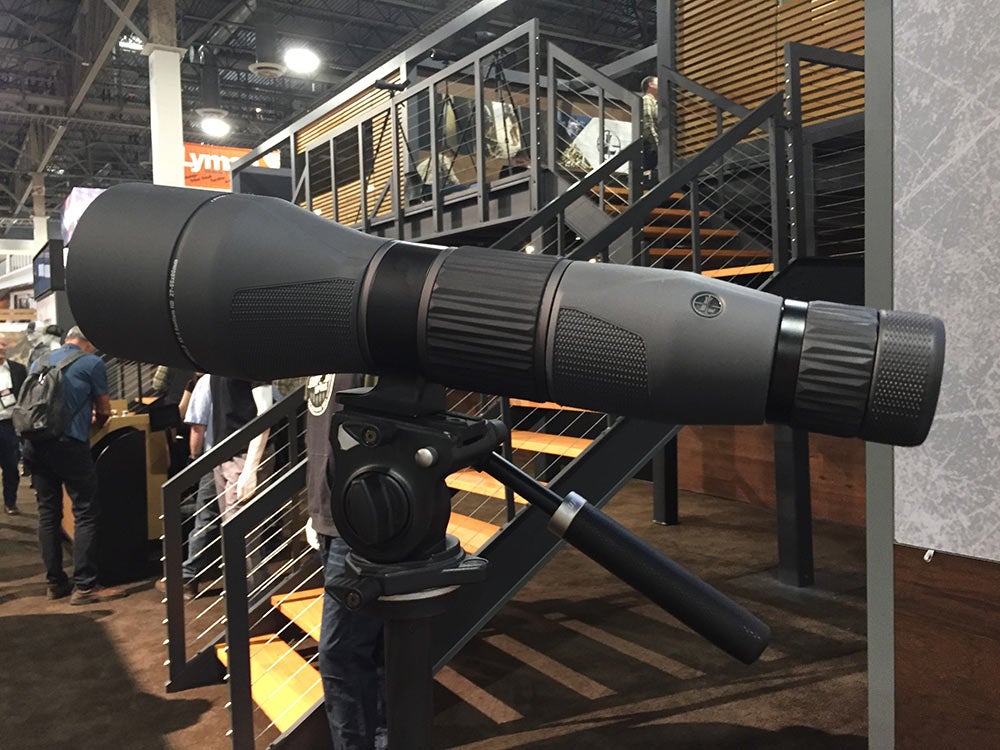 Leupold established backcountry cred with its Gold Ring spotter, which features a prismless design that allows its powerful magnification at about half the length of a traditional porro prism spotter. This year, Leupold’s new straight-barreled Santiam brings a more traditional design in a big 80mm spotter, but it’s still very trim and svelte, engineered to fit in most backpack sleeves. At just over 4 pounds, it’s not light, but imagine all the backcountry you can inspect from afar with it, saving an untold amount of time and miles in pursuit of distant game. Cost is $2,340. www.leupold.com 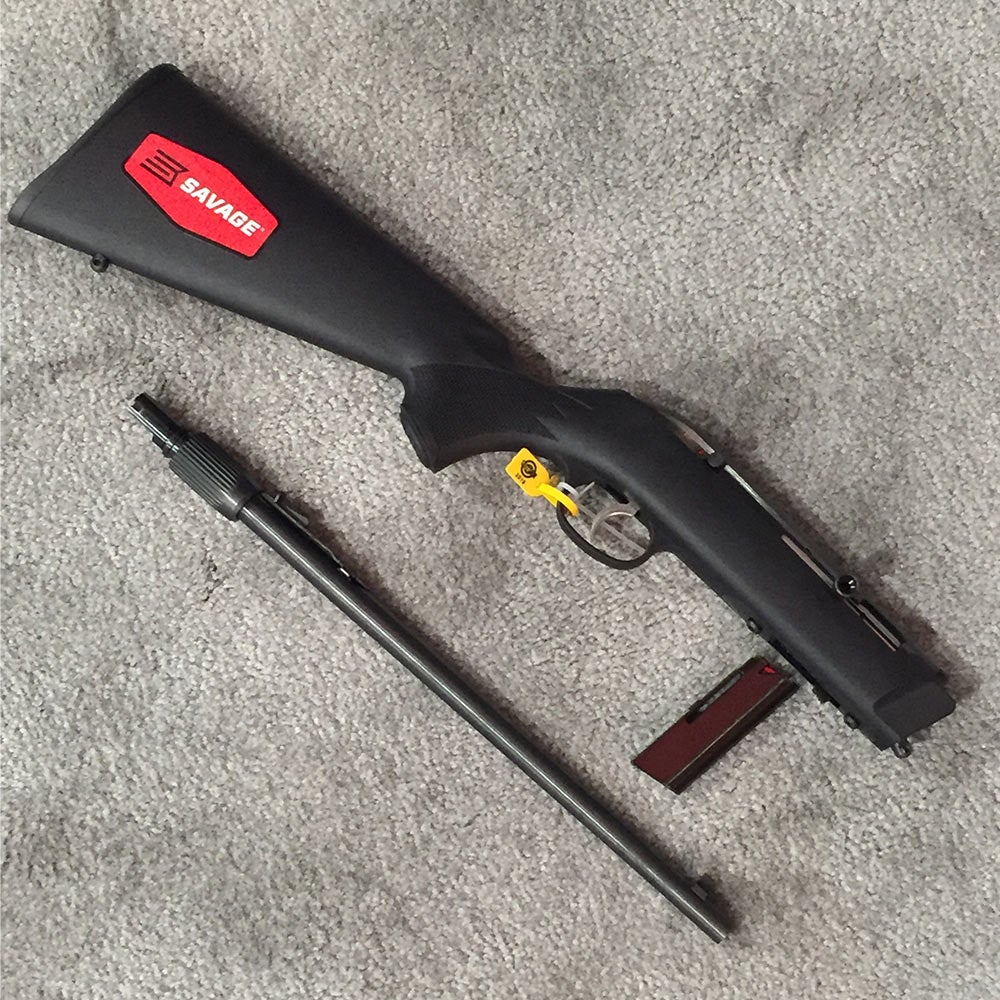 The very definition of a backcountry utility rifle, this fun little rimfire might just save your bacon. It comes apart by unscrewing the barrel nut and storing in a 20-inch bugout bag (included). It’s drilled and tapped for a scope, but the open sights offer a good combination of fast aiming the precision for a .22. The detachable magazine holds 10 rounds, and it’s also available in left-handed actions. At $249, it’s a bargain. www.savagearms.com