How to Make Your Lever-Action Rifle More Accurate 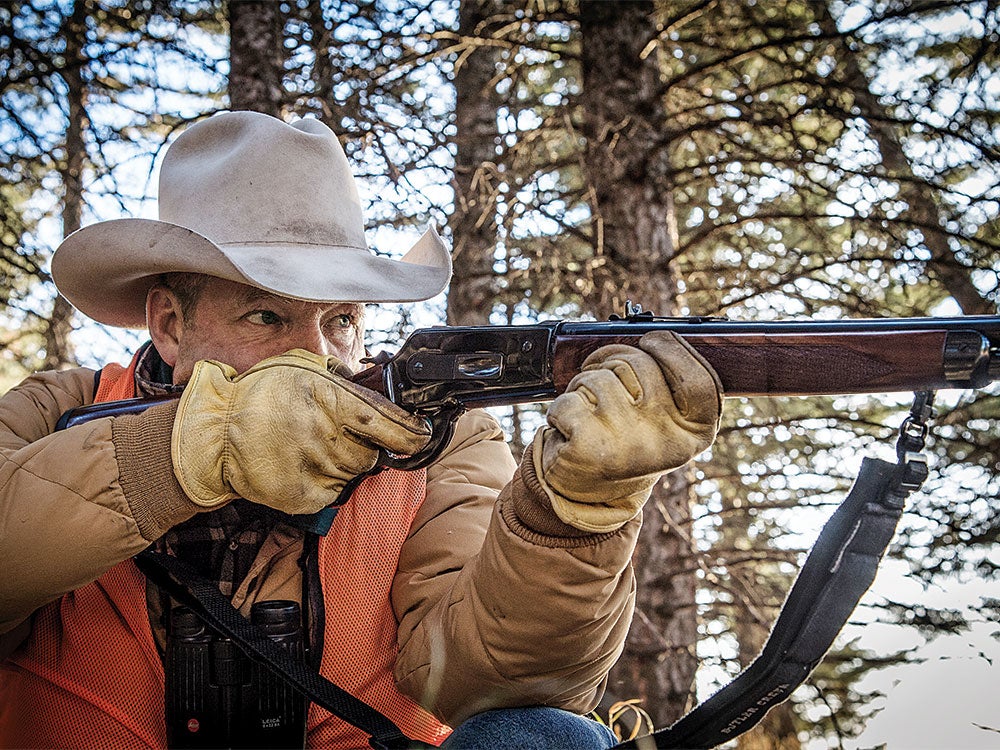 My love affair with lever guns started with a plastic Winchester M94—my first toy gun—and was cemented by my first real rifle, a Winchester 9422 Magnum that was a graduation present. Like me, countless other hunters have fallen under the lever-gun spell. But as we know, fine accuracy isn’t the forte of the platform. That said, there are ways to improve groups and increase the range of your beloved .30/30.

Lever-action rifles are unique in a couple of ways. They use a tubular magazine below the barrel that feeds cartridges into the chamber, which gives them a large ammunition capacity while maintaining their slim lines. However, this system can compromise accuracy.

The magazine tube and fore-end on lever actions are tightly fitted to the barrel and receiver. This does not allow the barrel to vibrate freely and puts pressure on the barrel as it heats up, causing a loss of accuracy and a shifting point of impact.

Lever rifles are also unusually stocked. The buttstock is attached to the rear of the receiver and the fore-end to the front of the receiver. Thus, the receiver forms the backbone of the rifle instead of the stock, as is the case with bolt actions. Excessive or inconsistent pressure on the stock of a lever gun will also degrade accuracy.

Before modifying your lever gun, consider its vintage and condition. A rifle that is in good shape and was manufactured anywhere near the beginning of the last century should be treated very carefully, lest you destroy its value. With a rifle like that, I recommend sticking to just loosening screws and not permanently modifying parts. A later-model rifle—say, from the 1950s on—could warrant more aggressive alterations.

With a newer rifle, in addition to loosening the screws, you can also shorten the magazine tube by taking .010 inch to .015 inch off the end that inserts into the receiver. You’ll also want to remove a small amount of wood from the fore-end with a few strokes of a file or sandpaper. Do this along the barrel channel and where it fits into the receiver as well. You want the fore-end to slip into the recess in the receiver with minimal resistance. This prevents binding on the barrel as it heats up. These adjustments will improve the accuracy and consistency of the point of impact as the barrel gets hot.

As a side note, these modifications were incorporated into Marlin’s XLR series of rifles to improve their accuracy and take maximum advantage of the LeverEvolution line of ammunition, which I helped develop. Tests done by editors at Outdoor Life and other publications in 2006 demonstrated the accuracy gains of these alterations.

Lever rifles have had buckhorn sights since the first 1860 Henry rifle. These sights work well for shooters with good eyesight and at modest ranges. Of course, the most effective sight for any rifle is an optical sight—a red-dot or scope. But if you want to maintain a lever gun’s elegant lines and handling qualities, the best option is a peep sight. Among the benefits of a peep sight are the increased sight radius—the distance between the front and rear sights— which improves accuracy, and the fact that they give a clearer view of the target than buckhorns.

There are two types of peep sights available for lever rifles: receiver-mounted or tang-mounted. Williams Sight Company and Lyman offer different types of receiver sights, while Lyman and Marbles make tang sights for most lever-gun models.

If a lever rifle is shot off bags underneath the fore-end and buttstock while the shooter presses his cheek on the stock, the rifle will flex and the point of impact will shift. My suggestion is to not use a rear bag at all. Instead, just pull the rifle in to your shoulder, as you would if you were in the field, while supporting the fore-end on a rest.

For bench shooting, fire only three-shot groups and let the gun cool for five minutes between strings. This prevents the gun from getting excessively hot and the point of impact from moving.

Read Next: The Top 10 Lever-Action Rifles of All Time

Basic Mods for a Lever-Action Rifle

To tighten up the groups on a lever gun, the answer lies, ironically, in loosening some of the screws and relieving pressure on tight-fitting spots where the stock joins the receiver. All of these modifications are done in order to minimize the external influences on the barrel. The closer we can get to allowing the barrel to free-float, the better.