The Model 70 Is Back in Action!

Winchester announces the return of the Model 70 for 2008, and we've got the lowdown on what's new and improved 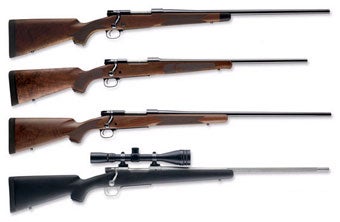 When Winchester shut down it’s New Haven plant a year and a half ago it spelled the end of two iconic firearms, the Model 94 and the “Rifleman’s Rifle,” the Model 70.

Since that day, there has been massive speculation about when (not really if) those two firearms would come back into production.

As of today, the Winchester Model 70 is back and the biggest news is that it is being made in the United States-not overseas as many had prognosticated-in a factory down in Columbia, South Carolina that makes machine guns and sniper rifles for the military. I got to spend a day at the range with the new Model 70 at its unveiling and came away with the following impressions:

New Trigger
The most notable feature on the new Model 70 is its new trigger, one that is adjustable down to 3 pounds, though the triggers will come preset from the factory with a 3 3/4 pound pull. (If a heavier trigger pull is your thing you can set it to break up to a maximum of 5 pounds.)

The trigger itself is a simple thing, incorporating just three pieces. Winchester calls the trigger the M.O.A., rightly linking the need for a good performing rifle to have a good trigger, which the M.O.A. certainly is.

As the illustration shows, the actual trigger, called the “trigger piece” by Winchester, is a lever that bears against a pivot-or “actuator”-that supports the sear, which in turn retains the firing pin. As the trigger pushes against the actuator, the actuator moves out of engagement with the sear. The sear then drops, allowing the firing pin to travel forward. Simple.

One benefit of this design is that there is zero takeup in the system. Likewise, while there is a certain amount of creep and overtravel-you need both for a mechanical trigger to function-the perception on the part of the shooter is that there is none. You get nothing but a clean break when you pull the trigger. This trigger feels very, very good. And for shooters who find the addition of safety levers to the trigger itself unsightly-a la Savage Arm’s AccuTrigger-the lines of the M.O.A. are neat and clean.

Barrels
Of course, the other major factor when it comes to achieving top accuracy is a quality barrel. The barrels on the Model 70s are cold-hammer forged, a process by which a billet of steel is molded around a mandrel at unbelievable pressures as it is stuck by a series of massive hammers. The mandrel has the rifling pattern on it and during the hammering process the lands and grooves are impressed into the interior surface of the barrel.

Guaranteed Accuracy
Do the rifles come with an accuracy guarantee? Yes. In its promotional material Winchester says, “you can expect 1 MOA accuracy for three-shot groups from your Model 70 using a properly managed barrel, quality match ammo and superior optics under ideal weather and range conditions.”

My experience shooting the Model 70 with a variety of factory ammo at targets out past 300 yards indicates that shooters can expect top-notch accuracy.

Three-position Safety
The new Model 70 comes with a three-position safety that has been redesigned to be smoother and easier to operate. The way Winchester’s engineers accomplished this boils down to this: When the gun is put on safe, the firing pin is moved out of contact with the sear. This is the way the old safeties worked too. What’s different in the new design is that the firing pin needs to travel less to separate from the sear. Because the swing of the three-position safety is the same as it was before, and it is moving the firing pin less, it operates with greater mechanical advantage. Viola! A smoother operating safety.

Available When?
Winchester is ramping up production to deliver the new Model 70 by June 2008. Stay tuned.