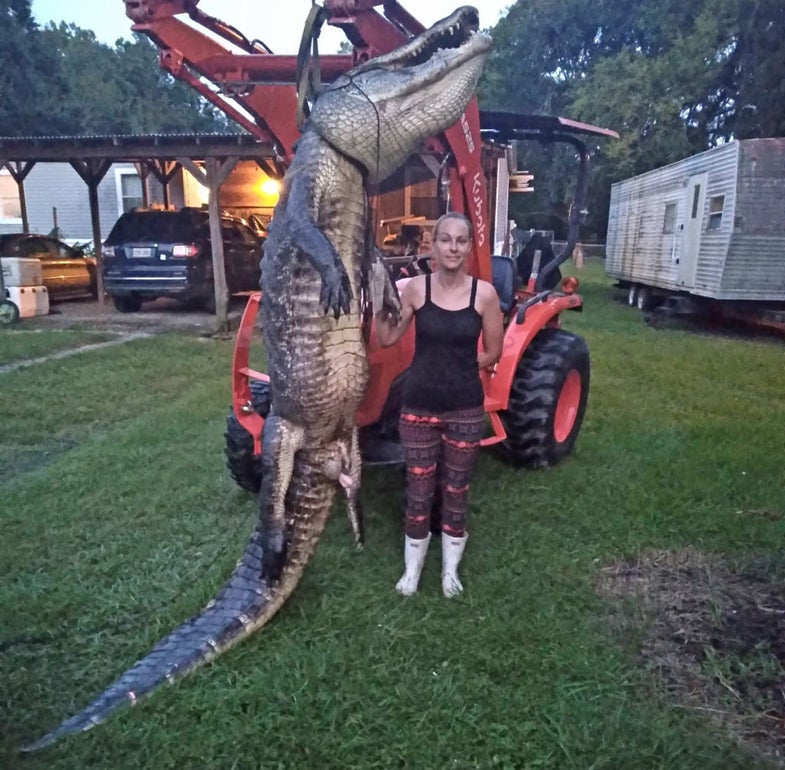 Maria Ellis of Baldwin, Louisiana, won several alligator tags in a lottery put on by the Louisiana Department of Wildlife and Fisheries for the Sherburne Wildlife Management Area, which borders the Atchafalaya River west of Baton Rouge. But she had no idea she’d be lucky enough to tag three big gators, including one so huge it almost was too heavy to get in a boat, according to the Louisiana Sportsman.

It was the afternoon of Sept. 6 when Ellis, 35, her brother-in-law Bryan Mires, and Craig Weenum were checking baited alligator set lines from a boat in the Big Alabama Bayou area of Sherburne WMA. They spotted a giant gator laying on a bank. But they didn’t believe such an enormous gator would eat one of their set-line baits. Then the massive gator slid off the bank. And as their boat approached the gator it bobbed up-and-down in the water, the set-line on shore pulled tight, and the gator dove.

“The gator definitely knew that he was caught,” Ellis told Louisiana Sportsman. “It kept rising and falling in the water, tugging on the line.”

Bryan Mires grabbed the heavy set line, and pulled the gator close to the surface so Ellis could shoot it. But the alligator kept submerging and fighting the line, rocking the boat.

“Oh my God, he’s going to knock the boat, and I’m going to fall into the water,” said Ellis.

The rocking boat and moving alligator made for a difficult target for Ellis. But she steadied her aim, concentrated, and fired.

“We had to pull the alligator to the bank because we couldn’t lift it into the boat without some kind of leverage,” Ellis said. “We pulled the boat parallel to the bank, and my brother-in-law got out.”

It took nearly an hour for the three hunters to haul the giant alligator into their boat and they later used a tractor to transport the creature on land. It measured 11½ feet long.

“There’s no way I could have handled that 11½-foot gator on my own,” Ellis said. “We never expected to pull up on a big, old gator like that. We’re elated to get a gator that huge. It’s a once in a lifetime gator.”

Over the next several days Ellis filled her two other Sherburne WMA gator tags: a 9-foot-9 from the Little Alabama Bayou and a 7-foot-4 one from Big Alabama Bayou.