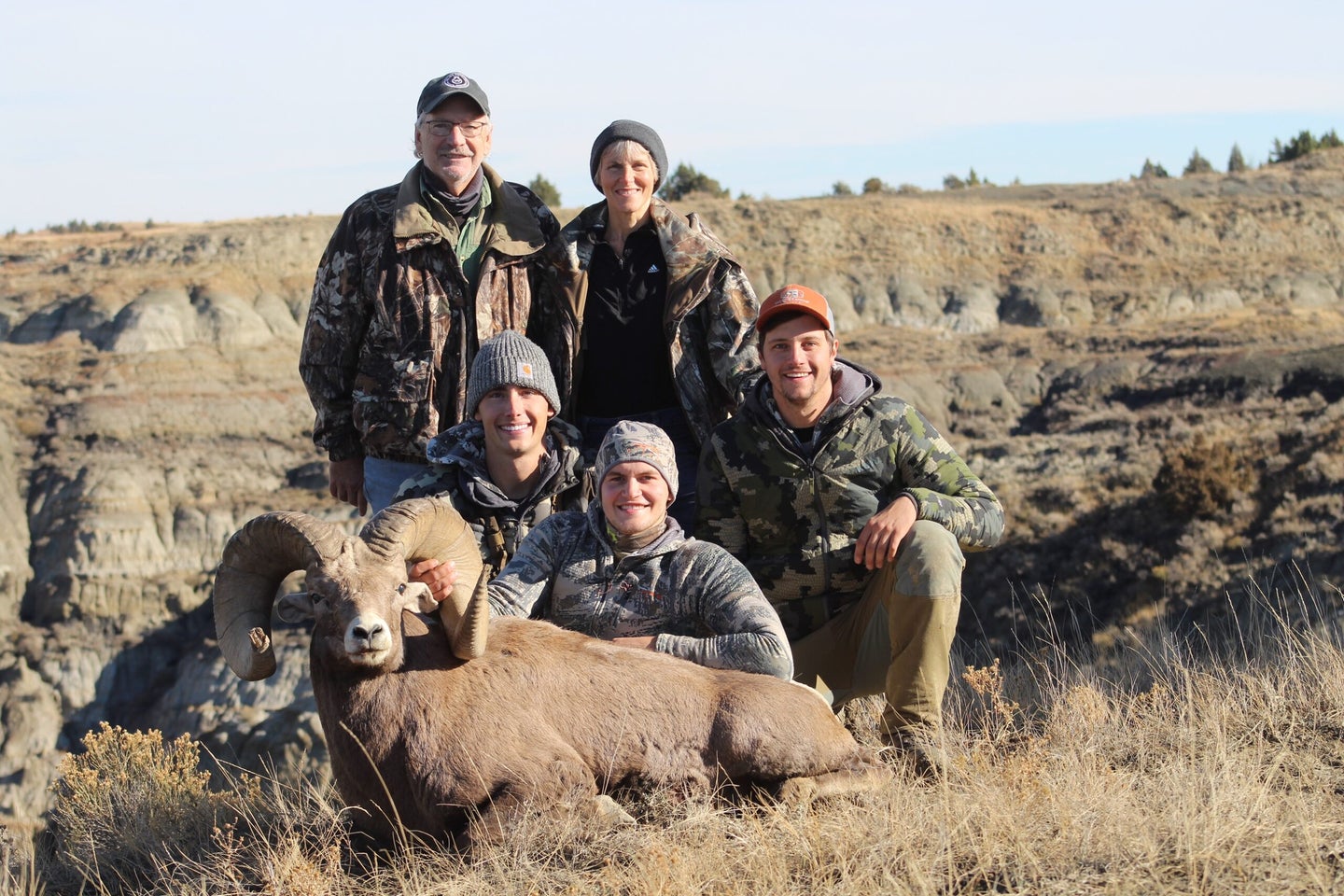 When one thinks of bighorn sheep hunting, snowy mountain crests, stony crags, and alpine meadows usually come to mind. But before settlement, bighorns ranged onto the prairies and plains; sheep thrived in the badlands, rough country and breaks where the land was cut by rivers.

Western North Dakota, and specifically sprawling and beautiful area that is now McKenzie County, was such a place. That bighorn sheep are back, and in huntable numbers, is an astounding success story. So is the tale of hunter David Suda and his friends, and their quest for the ram they named “The One.”

But let’s start at the beginning.

The animals were extirpated by 1905 due to subsistence hunting. But the habitat wasn’t. Western North Dakota is a wild and rugged place.

“In 1956, sheep were brought in from southwestern British Columbia,” says Wiedmann. “But they were ‘California’ strain bighorns—smaller animals from a different climate and not suitable for surviving a harsh North Dakota winter.”

Another attempt was made early in the new century, in 2006 and 2009. These sheep were relocated from the breaks of Montana.

“That was the trick,” Wiedmann says. “The big, tough, winter-ready animals have done extremely well.”

Another batch was brought in from Montana last year to improve the existing herd’s range expansion. The animals spend much of their time on the abundant public land rolling away from the Little Missouri River, including Forest Service lands, Bureau of Land Management, and Wildlife Management Area acres—but they also range onto private land. Wiedmann estimates current herd numbers at more than 400 animals, with 300-plus sheep managed by NDGF, and about 100 on tribal lands.

“The Midwest Chapter of the Wild Sheep Foundation has been a critical partner with NDGF all the way,” says Wiedmann. “They have provided more than a million dollars in habitat, research and conservation funding to establish and maintain bighorns in North Dakota.”

With limited hunting opportunity and almost unlimited interest, a sheep tag is challenging to draw in North Dakota.

The lottery draw for bighorn sheep tags happens in early September after the summer herd survey is complete. In 2020, six licenses were approved. Four residents drew the once-in-a-lifetime license, one nonresident draws each year, and one tag is auctioned off through the Wild Sheep Foundation to raise critical funds for the sheep program.

Nearly 17,000 hunters applied, and 23-year-old David Suda was one of the lucky resident recipients. It was Suda’s fourth time applying for a sheep tag.

“It was crazy,” he laughs. “The night before the draw, my buddy Jens Johnson and I were talking about it. He said he thought I was going to draw. The next evening when [Wiedmann] called me with the news that I had drawn, it took him five minutes to convince me he wasn’t somebody Jens had put up to it as a joke.”

“When I realized it wasn’t a joke, I had to pull over and breathe deeply,” says Suda. “It was a world of emotion.”

David Suda grew up in Grafton, North Dakota, and now lives and works in Walhalla, just north of his hometown in the state’s far northeastern corner.

“My stepdad got me into hunting,” says Suda. “Waterfowl was big for me. When I was 14, I started bowhunting and that has been a passion since, [chasing] big whitetails.”

Suda has worked to branch out into other big game, with elk on the target list. He has been elk hunting, and had been regularly applying for North Dakota’s tags for elk, moose, and sheep. He learned about his bighorn luck in early September, with the opener on October 30. And so the work began.

“We spent six weeks scouting,” says Suda. The “we” included the aforementioned Jens Johnson and another hunting buddy, Ryan Seil.

“I would squeeze my workweek into four days,” says Suda. “It’s a five and a half hour drive from where I live out to sheep country. We’d leave Thursday night, scout Friday, Saturday, and Sunday morning, then head home.”

“We found this ram the very first evening we scouted,” Suda says. “We kept working hard and found other rams, too. But this was definitely the one we wanted. We saw him just about every time we scouted. In fact, we named him The One.”

“Two weeks before the season we saw him on a Sunday,” says Suda. “Then, a week before the season, we scouted for four days and he just wasn’t anywhere. We scoured that country head to toe.”

With the rut kicking in, a likely scenario was that the ram was out chasing away other rams, or courting ewes. They didn’t think they had spooked him.

“We always laid way, way back while scouting,” says Suda. “That ram never knew he was being watched. There was just no use getting close and spooking him.”

Suda and his buddies headed out an extra day before the season to look for The One. This time Suda’s mother and father, Tim and Cori Dvorak, accompanied the trio of Suda, Johnson and Seil. He wanted them to see the country, and be a part of his hunt.

“Then we found him again,” Suda says. “The One was in the river bottom with 17 ewes. He was two and a half miles from the country where we would usually have found him…We stayed on him until dark the evening before the season, and a lucky thing, too. Right at dusk the sheep moved a mile. If we had called it good early, we would have come back to the wrong spot in the morning.”

The hunters headed out at 2:30 a.m. to get into position where they had last seen the ram before dark.

The ram had ended up on private land, but Suda had already obtained permission to hunt it.

“The ranchers out there are so nice, such great people,” he says. “They are so proud of those sheep.”

There wasn’t a dawn as much as there was an ooze that day, with a heavy fog to start.

“We were waiting for enough light and clearing to be able to see. We had split up to [visually] cover more ground.”

The breaks are rough country, and there are almost endless places for sheep to hide.

“When there was enough light to shoot and enough fog had lifted, I had a ram in my crosshairs,” says Suda. “But it wasn’t The One.”

Suda held fire. But Johnson spotted the ram they were after, way down in a canyon. He was about 350 yards away, and standing broadside. Now it was time for hours of practice at the rifle range to pay off. And it did: At 350 yards using his Ruger American in 6.5mm Creedmoor, Suda squeezed off a round and double-lunged the ram.

“They are so tough, you can’t believe it,” he says. “The ram just hunched. I had been advised, if you can put another bullet in them, do not hesitate. So I did. The ram moved off and went over a saddle.”

Every hunter knows what the next 10 minutes were like.

“Finally, we went out after him,” says Suda. “We knew exactly where he had been. When we got there, I topped the saddle, and there was The One. Piled up. I broke down a little. Here I am, 23 years old and on the literal hunt of a lifetime with a trophy ram down.”

The hunting crew had successfully tagged the ram of their dreams. Record books weren’t even a consideration. Suda’s mom and dad, Cori and Tim, arrived shortly. It was pure wonder and joy all around.

“I could not have done it without Jens and Ryan,” Suda says of Johnson and Seil. “It just would not have happened without their help.”

After the Hunt for the Record North Dakota Ram

That critical help included the aftermath of taking care of a trophy game animal and meat, far in the rugged outback.

“We had a pole, so we got the ram lifted to weigh him, and take tissue samples from the tongue, liver heart and lungs,” says Suda, per NDGFP requirements for research. “It was all actually pretty fun, but I was in shock the whole time. Jens joked that I wasn’t talking straight.”

The ram weighed 212 pounds before any field dressing or skinning.

“Jens is very detail oriented, and he caped out the entire ram for a full body mount,” says Suda. “We quartered the animal for the meat. He was in the roughest part of country.”

It took until late afternoon to get all the work done and meat packed out.

“He was rutting hard, and I never—and that is never—smelled a game animal so rank,” Suda laughs. “I was little afraid. But the meat is good. It makes particularly tasty sausage.”

And those horns? After the mandatory drying period, the full-curl horns scored out at 186-2/8 net inches, enough to make them North Dakota’s biggest ever. Wiedmann thought the ram would be about 7.5 years old.

Read Next: A Bighorn in Broken Country

North Dakota rams grow big, says Wiedmann: “They just keep getting bigger and bigger. Five of the last six years, we have broken the record.”

And where do you go from here after tagging the record book ram of a lifetime at age 23?

Suda shot a 170-inch mule deer buck in November after getting a lucky draw for a mule deer tag for the western part of the state.

Somehow you just have to think it’s going to happen, and maybe it will.