What may turn out to be the largest bighorn sheep ever taken in the United States was harvested last week... 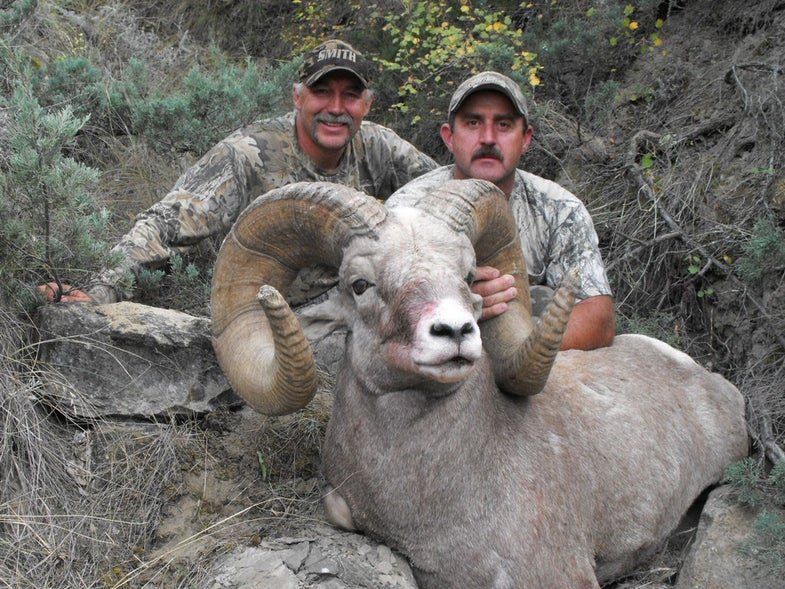 What may turn out to be the largest bighorn sheep ever taken in the United States was harvested last week in Montana’s Missouri River Breaks.

I’m still chasing down the Utah hunter, Pat White, who connected with the remarkable ram, but preliminary reports indicate that it’s likely to be a new Montana state record, topping Jim Weatherly’s 204-7/8-inch Rock Creek ram shot in 1993. The world-record bighorn ram is a 208-3/8-inch Alberta monster shot in 2000 by Guinn Crousen.

Early measurements indicate that White’s ram, shot early last week, stretches 205 inches, with 44-1/2 inch horns and bases that measure a whopping 16 inches. As the photo indicates, the horns carry that mass well down their remarkable length. The ram will be officially scored after the mandatory 60-day drying period, but bighorn horns don’t generally shrink as much as deer or elk antlers do, so you can expect the final score to be close to the preliminary measurement.

The ram was harvested in District 482, on the south side of the Missouri River, in Dog Creek, west of the legendary Whisky Ridge, a maze of gumbo knobs and cliffs that has produced several record-book sheep over the past decade.

The hunter, Pat White, drew the only non-resident sheep tag for District 482, and reportedly backpacked some 10 miles in to a remote drainage, where he found and shot the ram, then packed meat and cape out in 90-degree heat.

In an interesting twist, White was accompanied by John Lewton, pictured here with White, a taxidermist and self-described sheep zealot who has been charged with trespassing, felony sale of wildlife and use of a two-way radio while sheep hunting. The charges stem from an undercover investigation last year in which Lewton and two accomplices guided an undercover agent to a Missouri Breaks ram that was later killed by the undercover agent. That ram, taken in District 680 just north of Whisky Ridge, scored 204 inches and, had it been taken legally, would have been a contender for the next Montana state record.

The sting operation was sparked by Lewton’s involvement in the harvest of the last nine Governor’s Tag rams in Montana, according to Montana Fish, Wildlife & Parks. Lewton, who is not a licensed outfitter, reportedly invited himself on these hunts, helping the hunters find and field judge record-book rams.

I asked FWP contacts whether Lewton’s involvement with White’s hunt will tarnish the potential record status of the ram. They said it’s too early to tell, but are looking in to the relationship between the two men.

Lewton’s case is expected to go to trial sometime next year.