The Dead-Zone Paradox: Why Shot Placement That Appears Perfect Can Be Deceiving on Big Game

A zoologist's take on mastering shot angles and arrow placement 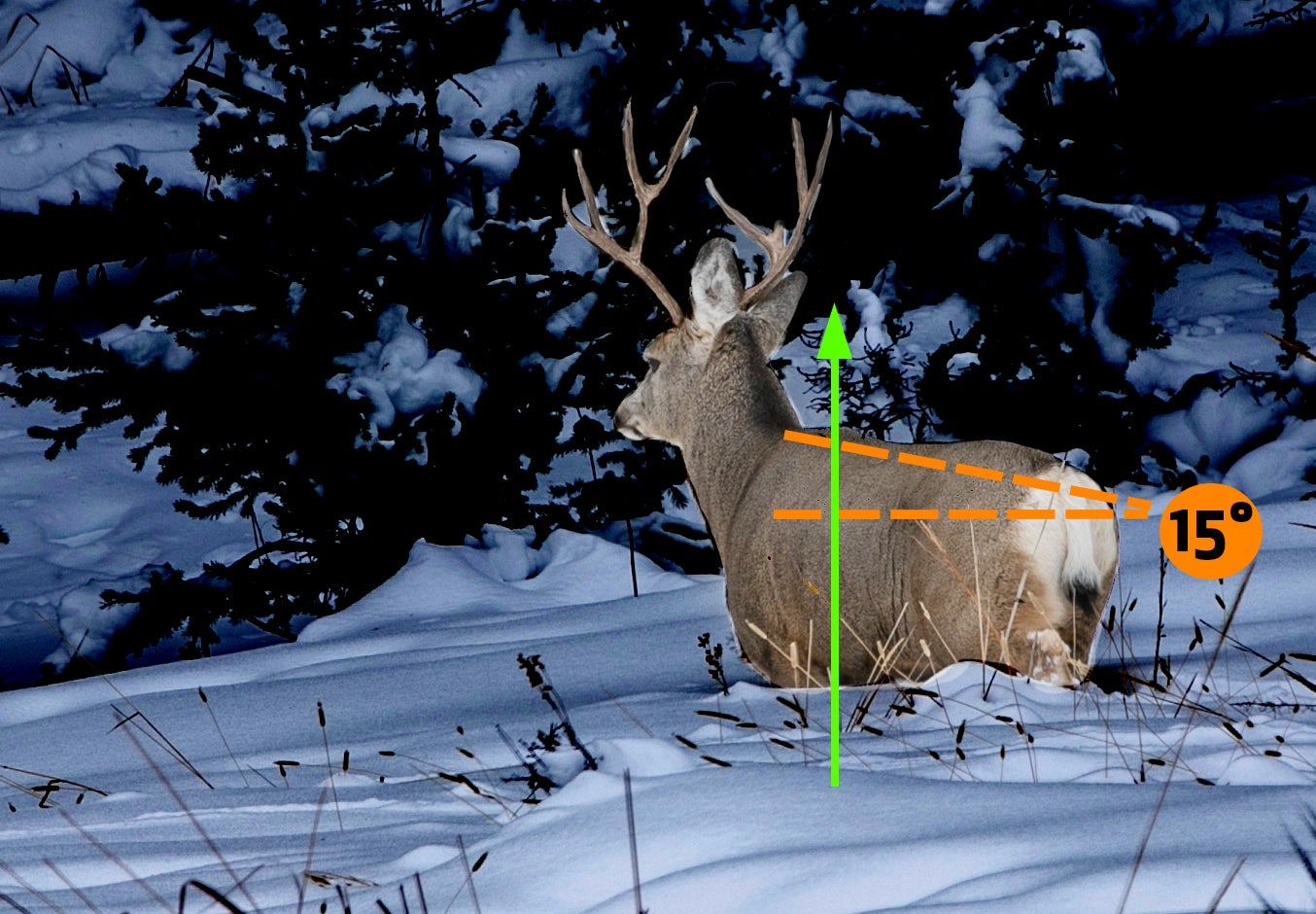 The bigger a big-game animal, the bigger the risk of striking a dead zone with your shot placement. Photograph by Diane Renkin / NPS
SHARE

It was the eighth day of a 10-day September archery elk hunt in southwestern Montana. This was my first year returning as a nonresident, after skyrocketing housing prices had pried me away from my life in the Montana mountains, and my residency status. I was joined by a friend, and we covered endless country day after day. With only a handful of encounters to interrupt the grueling hikes, our enthusiasm evaporated with each afternoon’s heat.

Then, situated behind a spruce tree, we noticed a cow elk traversing the ridgeline. I crawled ahead to get in position should a bull follow. Within seconds, one was walking down the ridgeline toward me. The set-up was flawless. With the tree concealing my movement, I drew my bow. When the bull stepped from behind the trunk, I released the arrow, which disappeared behind the left shoulder and the bull staggered instantly. Our camouflage couldn’t conceal the smiles on our faces.

But then the bull slowly walked away. He stood in a stand of downed timber for an eternity as I scanned for an exit wound through binoculars. The entry wound looked ideal, but why was he still standing? I knew there was a degree of error when I saw fletching exiting the bull’s right flank, but I remained hopeful that injuries caused by the arrow would be lethal. Bugles echoed in every direction while we waited in agony for the bull to keel over.

After an hour of waiting, the mountain erupted with the sound of spooked elk, and the bull vanished. A hunter’s worst nightmare.

I take pride in shot placement and spend the off-season honing my ability to execute challenging shots. I practice while fatigued, at awkward angles, and with weight in my backpack. None of that training was necessary for this set-up. I was calm and collected. I was not sporting a backpack, and I was not aerobically compromised. The animal was relaxed, too. It was the perfect set-up.

We performed a herculean tracking effort, but never recovered that bull. Slowly the reality soaked in: I had misjudged the angle of the shot.

Most hunters are taught early on that the most lethal target on a big game animal, assuming a broadside presentation, is just behind the animal’s shoulder. While this is sound advice, the target doesn’t always present this angle to the hunter and failure to adapt to a changing presentation is a main ingredient in the recipe for disaster.

The mastery of shot-placement geometry is particularly important for archers. While I was never a master of geometry class, I recognize the importance of the angle at which a trajectory bisects an organ, or system of organs, contained by the abdominal or thoracic cavity of a big-game animal.

Fortunately for archers, most mammalian species have remarkably similar anatomical layouts, ensuring that the archer does not have to re-learn shot placement for every species we pursue. While anatomical similarity enables transferable shot placement, it’s imperative that the archer recognize the variation that does exist among big game animals. While imperfect shot placement may be forgiving in some situations and for some species, it can haunt the multi-taxa big-game hunter.

Read Next: Shot Placement on Bears? Aim for the Middle

I have the rare opportunity to study vertebrate anatomy through the lens of my day job as a zoologist. Shortly after that frustrating hunt, I was involved in elk immobilization for a routine veterinary physical examination. I am always amazed at how big everything is on an elk: the legs are long, the chest is huge, the blood volume is massive. Paradoxically, however, the margin of error for the elk hunter is small; that larger vital target does not proportionally increase the likelihood of a fatal shot.

Allometry is the relationship between the size of an organism in relation to its physiology, morphology, and life history. Anatomically speaking, a larger animal has more tissue, which requires more oxygen and subsequently more blood to deliver that oxygen. Larger lungs are required to supply the blood’s hemoglobin with oxygen. Certainly, a larger pump is required to distribute the blood volume across a larger area, so bigger animals have larger hearts and blood vessels to distribute the blood to the tissue. So when everything is big, how can the margin of shot placement error remain small?

Vital organ tissues are not created nor distributed equally within big-game animals, and the likelihood of bisecting vital tissues are higher in smaller species due to spatial constraints; these organs are confined in a smaller space and in proximity to adjacent organs and blood vessels. In other words, the chances are relatively high that an arrow passing through a smaller animal will bisect an essential organ or blood vessel.

In larger animals, however, there are more opportunities to bisect the non-lethal spaces of an organ: the dead spaces. As the size of the animal increases, the amount of non-lethal space increases. This is also applicable between the sexes of the same species, such as between a mature male and an immature female. Counterintuitive though it may sound, smaller living targets are often more forgiving than larger targets. This is particularly relevant when hunting from an elevated platform in which a vertical angle exists, in addition to the horizontal angle. A miscalculation in the angle of the animal relative to the trajectory can lead to devastating outcomes. Even with a placement that appears good, your shot can narrowly miss lethal tissue and bisect nonlethal dead space instead.

The principal cause of death for an animal injured using archery equipment is blood loss. This is evident in the staggered gait an animal exhibits due to the abrupt drop in blood pressure associated with an injury to a major blood vessel. These blood vessels are the most vulnerable in the thoracic cavity of all species.

Even essential organ tissues can survive traumatic injury. A big-game animal with plenty of grit could feasibly survive a trajectory that bisects both rear lung lobes with a full pass-through trajectory, particularly an animal whose large volume of blood forms a lifesaving clot. While essential organs like the lungs and liver involve a complex network of blood vessels, not all injuries to these organs are created equal, and an animal can feasibly survive long enough to evade a skilled tracker or heal entirely.

Read Next: Should You Really Wait 30 Minutes Before Blood Trailing a Deer? Not Always

Successful harvests are measured by swift and efficient lethality. To avert the frustration of improper shot placement, the hunter should deliberately identify a target that exploits the most devastating series of injuries. Poor shot placement due to misjudged angles in big-game animals is a primary cause for nonlethal shots. What’s more, accurately interpreting the bisecting angle of a trajectory provides valuable insight into the timeline you should follow to pursue a wounded animal.

To thwart the dead-space paradox, practice shot placement on targets at a variety of horizontal and vertical angles during the off-season. Evaluate your shots based on the number and vitality of organs hit with each shot. The more you practice this, the more you’ll be prepared for any angle you encounter during hunting season.

The degree of my miscalculation in Montana was twofold; not only did I misjudge how heavily the animal was quartering towards me, but the animal was also descending a ridgeline above me. While my arrow hit its mark behind the front left shoulder, by my best guess, it exited a full 20 inches behind the entry wound and 6 inches above. Don’t be deceived by a flawless entry wound or even a satisfactory exit wound; the path between the two is what matters.