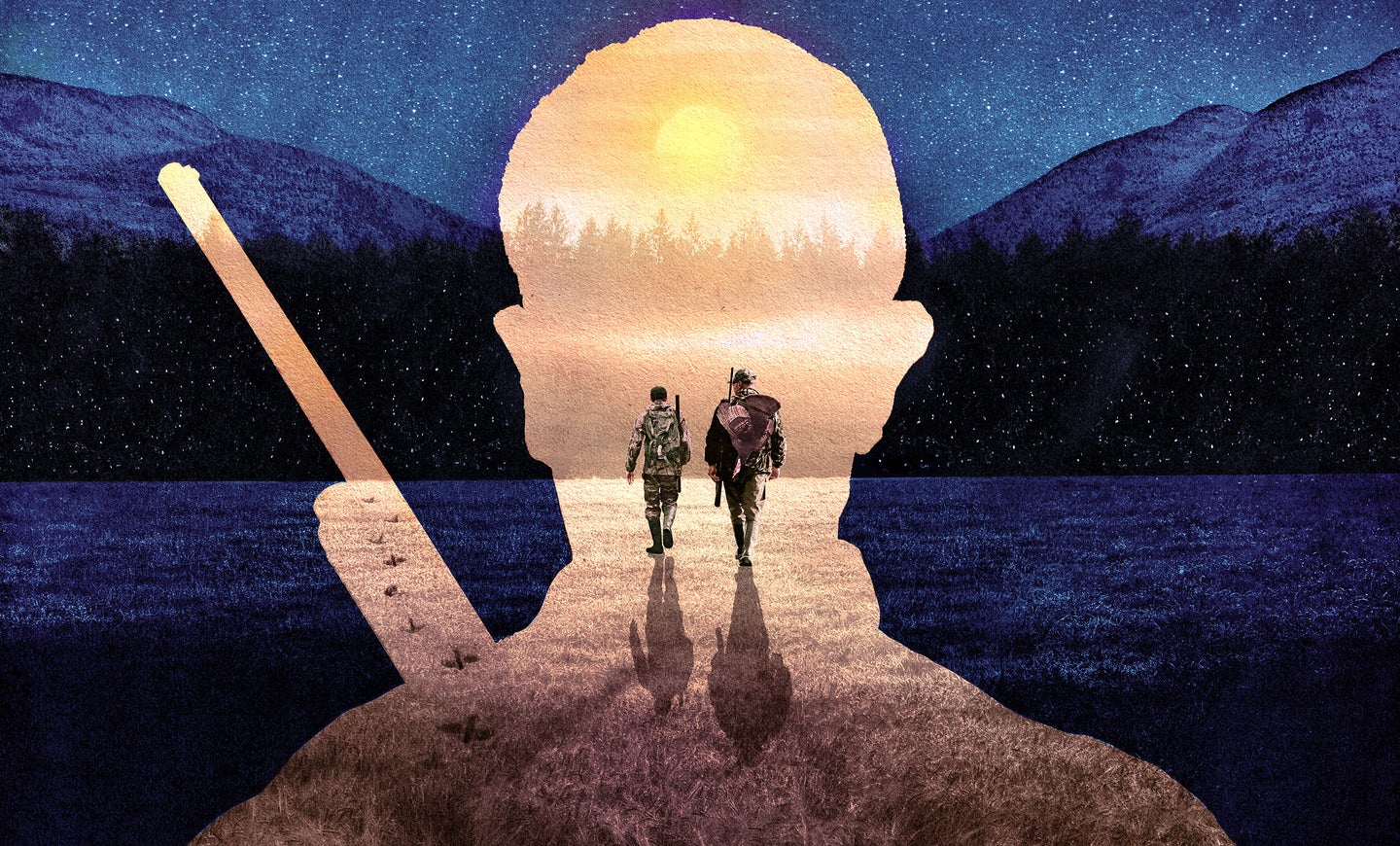 A turkey hunter's legacy lives on in an unremarkable shotgun. Zach Meyer

Strebbie’s Gun: A Turkey Hunter’s Legacy Lives on Through His Shotgun

“When I die, I'm leaving that gun for Ely. He needs to kill another 100 gobblers with it.”

DAVE STREB’S TriStar 12-gauge wasn’t really one of those ultraspecial, fancy shotguns that you take out only once a year. Hell, it didn’t even have a scope or red-dot sight on it. It was just an everyday, everyman’s turkey gun. But it was Strebbie’s.

“Gerald?” Only my mom and Streb ever got away with calling me by my given name. “Happy New Year, buddy.”

This phone call went exactly the same way every year.

For more than 20 springs in a row, Streb, who was the business manager at Quaker Boy game calls, made the six-hour drive from Cuba, New York, to my Berkshire Hills turkey camp. What had once been a quick three-day hunt eventually grew into a five-day, then eight-day event. And the countdown to opening day always started on New Year’s.

Long before the phrase mentoring new hunters became fashionable, there was Strebbie. Mentoring was, in fact, how he and I first met. When Streb invited a fellow Outdoor Life editor on a fall turkey hunt with dogs, I managed to elbow my way in on the fun. The ever-enthusiastic Streb was all about it. We met rather informally in the parking lot of Turkey Trot Acres in Candor, New York. Seconds after I rolled in, there was Streb, looking excited—no, downright exuberant—at my window.

“Get your stuff!” he shouted. “We’ve got a flock located. Let’s go turkey hunting.”

And we sure did. There really wasn’t much time for introductions.

“There they are,” said Streb, pointing to a distant hillside. “This game is pretty fun. The dogs will bust the birds, we’ll get to the break site, set up, and call them back together. Hopefully, we’ll shoot a couple of them when they regroup.”

I struggled to keep up with the 5-foot-9-inch ex–elk hunting guide on the scramble up the hill and into the oaks. We set up sitting right next to each other against the same tree.

“Let’s wait a little bit till we hear the first bird,” he said. “We’ve got plenty of time for a butt.” (Streb was a smoker just like me.) “Then we can start calling.”

“We?” I’d learned early on that when you’re hunting with a guy who’s won numerous calling competitions, you leave your calls in your vest.

Precisely one Winston later, a far off kee kee broke the silence. Streb chimed in with a kee kee of his own and nodded at me to do the same—and I couldn’t have sucked more.

“A little more tongue pressure on the reed,” Streb said. “It’s pretty damn good but just needs to be higher pitched. The best teacher is that hen out there at about 100 yards. Just listen to what she’s doing and imitate it.”

It took several tries, but I finally sounded passable. At least the birds thought so.

“They’re coming,” Streb said. “You shoot the first one in.”

I managed not to miss, but when I sprang to my feet to claim the turkey, Streb immediately pulled me back in place.

“Just leave him for now,” Streb said. “It’s my turn, and the rest of the flock is on its way.”

All I could do was laugh. I had never experienced anything like this in the spring turkey woods before. And then they came. Streb soon got tight on the stock, and our second fall bird fell in the leaves.

Strebbie knew long before he’d ever met Ely Cormier that he was hunting on borrowed time—though Streb really hadn’t told any of us the particulars. He also never once complained. Streb had had a heart attack, and he was on oxygen and medication for his inflamed lungs. He was given a limited life expectancy by his doctors. Whether it was five years or 10, the always-guarded Strebbie never said, and none of us ever asked. Through it all, though, he’d never—not once—lost his childlike enthusiasm for turkey hunting.

Ely and Streb first got acquainted on a backwoods dirt road in the Berkshire Hills. Ely was just a toddler, and he was sitting in the front seat of the -powder-​blue Cadillac Eldorado belonging to his dad, Marty. The decidedly bizarre hunting vehicle was pushing water with its front bumper through a flooded beaver dam.

“Good morning, Strebbie. I want you to meet my son, Ely,” said Marty Cormier. “Oh, and don’t worry about the rig—it’ll work just fine. Besides, the kid’s gotta learn -sometime—might as well be now.”

Innumerable town kids stopped by our camp each spring to talk about turkey hunting and take home one of the many prized Quaker Boy calls that Strebbie passed out. However, none was more eager to learn than Ely.

Streb put on informal clinics about hunting spring turkeys, ribbing Ely the whole time. Ely made fun of Dave right back, but there was no doubt that the kid was soaking in every second of it. Whenever Streb pulled out a new call, Ely was the first in line to try it. And in very short order, he became a damn fine turkey caller.

“Heck, Dave taught me everything,” Ely, who is now 17, told me. “I’d go home and practice and practice—get kicked out of the house by Mom and Dad—and then practice more. I just loved it.”

By the time Ely was 14, he was more than ready for youth turkey season—as was Streb.

But that opening morning never really dawned in the strictest sense of the word. With temperatures stuck in the low 30s and a steady rain threatening to turn to snow, Ely, Strebbie, and I shuffled into our blind, opened the windows, and waited. Long after first shooting light, a group of birds approached our setup.

“Here, Ely,” Streb whispered. “Use my gun. It’s a shooter. Kill the strutter.”

“I’ll be honest,” Ely said after killing his first-ever longbeard. “I don’t even remember where I put the bead. I just kinda pointed and shot.”

After the hunt, and with Ely out of earshot, Streb said to me, “Gerald, when I die, I’m leaving that gun for Ely. He needs to kill another 100 gobblers with it.”

If ever there was someone who needed protection from COVID-19, it was Strebbie—and all of his buddies knew it.

“I’d go food shopping for him pretty much every week,” said his close friend Tony Williams. “We just really tried to keep him safe at all costs, no matter what it took.”

Much to everyone’s disappointment, we decided to cancel spring 2020’s turkey camp just so we wouldn’t tempt Streb into making the trek east.

By the time fall arrived, though, Streb had had enough of social distancing.

“I just want to go to the damn super-market and pick out my own steak,” he told me. “Enough already. This is killing me.”

Ultimately, it was an impromptu New Year’s Eve gathering that actually did kill him. The first phone call came from Williams.

“Hey, Ger,” he said. “I tested positive, as has Nicole. I feel like dogshit. Don’t know about Dave yet.”

Only a day or two later, I got the word that I so desperately didn’t want to hear.

“Strebbie’s going into the hospital,” Williams said. “He can’t breathe.”

Ely Cormier texted me for a status report on Streb each day. It didn’t take long for the virus to steal away our friend and a prince of a human being.

April finally arrived, and a tearful Williams and another dear friend, Mark Wenke, showed up at my turkey camp. There were only three of us now, and we knew that our spring hunt would never be the same. Through the sadness, though, we howled with laughter at Streb’s expense only because we knew that he wouldn’t want it any other way. And when Ely came by to visit, Williams reached into the back of his pickup to deliver on Streb’s promise.

“Here you go, kid,” he said, handing Ely Streb’s gun with no fanfare—because that’s how Strebbie would have done it. “Dave wanted you to hunt with this. Now go and kill some turkeys with it.”

And he sure tried. Ely was determined to kill his first gobbler on his own with Streb’s gun, and he took out that TriStar on mornings before school, on days off and Saturdays. He hunted the same field where he had killed his first gobbler with Streb two years prior. Sometimes birds were there, but more often they weren’t. Even though Ely had more places to hunt, we all knew why he kept going back to the same field.

“It was getting late in the season,” Ely told me. “There were only a couple days left. I heard a bunch of turkeys off to my left, but there were other ones there too. So I just got into the woods, set up, and started calling. They pretty much gobbled at everything, and soon, there they were. It was those jakes I had been seeing, but I didn’t care. I was careful to aim this time, and he just went down.”

He tagged that jake within 100 yards of where he took his first bird ever with Strebbie.