The fall migration is on, but these aren't your granddad's geese 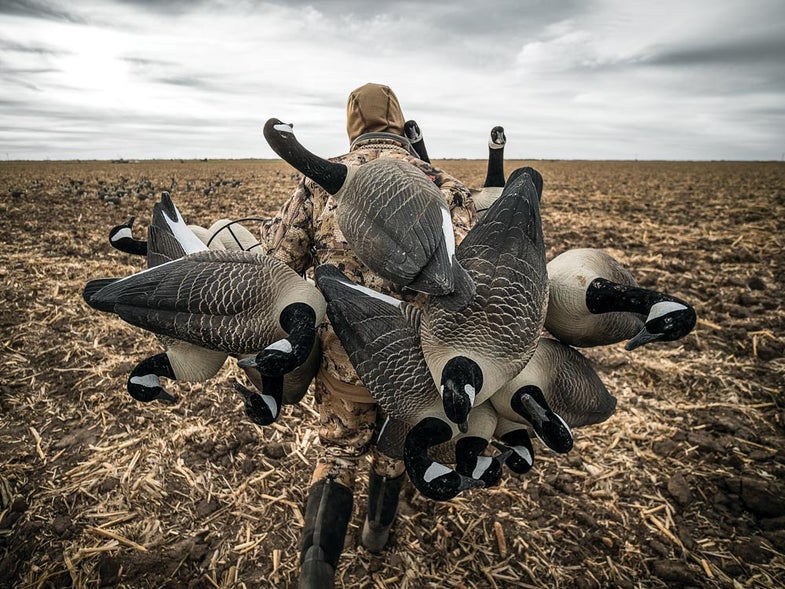 The oldest known waterfowl to be banded and recovered in North America was a Canada goose that lived for 30 years and four months. That’s 30 autumns of avoiding predators and hunters’ guns.

The point: Geese are waterfowling’s ultimate survivalists. We might have a bounty of birds—both resident and migratory populations of geese are either stable or increasing in almost every flyway—but consistently taking geese has never been more challenging. That’s because over just a few generations, honkers have adapted to evade standard hunting tactics. Other forces working against the modern-day goose hunter include more efficient farming practices, unpredictable fall weather, and changing migration patterns. To kill educated geese, hunters must adapt as well.

Ryan Breish, an accomplished waterfowler from Michigan and one of the creators of the Fowled Reality video series, scouts geese as carefully as a whitetail hunter monitors a trophy buck. When Breish finds a mob of field geese (and gets permission to hunt them) he doesn’t move in the next morning. If the forecast calls for multiple days of cold, stable weather, he opts to watch the geese for another day or two, to see exactly how they are using the field.

Breish moves in with a group of buddies to actually hunt only after he knows where the geese want to feed, when they want to feed, how they enter the field, and where the best hide is located. “Geese are pressured now and they get educated fast,” Breish says. “You might only get one chance to hunt a field, so you want to do it right.”

Wayne Radcliffe, sales manager for Banded and a veteran Eastern shore goose hunter, opts for a mega spread during the last few days of the season. He’ll find a hot field or a good location to run traffic and gather up all his buddies who have decoys. With this small army of hunters, he’ll set 35 to 40 dozen dekes. Only a fraction of the hunters actually sit in the blind to start (the rest wait at the trucks and watch the action from afar) because it’s easier to hide fewer hunters. Once the birds start dropping and guys limit out, Radcliffe rotates new hunters in to the blind until everyone in the group gets their geese.

John Taylor of Bay Country Calls (and former world-champion caller ) likes the exact opposite tactic during the final days of the season. He’ll use only seven or eight ultra-realistic full-body decoys and set them as far from the blind as he’s comfortable shooting.

Both tactics are designed to do the same thing: Show pressured geese a totally different spread from what they’ve been seeing all season long.

3. Calling: One Piece at a Time

Taylor is a goose calling champ who can belt out a cacophony of honks, clucks, and moans so that he sounds like a full flock of geese. But you won’t hear him doing that in the beginning of the season. Taylor hunts fields around Chesapeake Bay—a major wintering area for Atlantic Flyway honkers. The birds he targets are there to stay all season; they’re not migrating through. So Taylor calls only as much as is necessary to bring the birds in. His goal is to educate as few geese as possible on each engagement.

“Say you’ve got a flock of 12 geese. You call them in with everything you’ve got and kill only three. The next day you see a flock of nine birds coming from the same direction. You hit them with the same call sequence as before because you’ve got nothing else left to throw at them. I’m betting those geese are not going to come in,” Taylor says.

So don’t give them the kitchen-sink approach right away. Start with simple honks and clucks. If that is enough to bring in birds, stick with it. As the season progresses, get more aggressive—add some spit-moans and mix in more people calling to sound like more geese. If the birds respond positively, keep the volume cranked up. But remember that each day is different. Read the geese and adjust to their reaction.

4. Hiding: The Off-Center U

Low-profile layout blinds can get you only so far. Cole Fabro, a diehard goose hunter from Minnesota, tweaks his decoy spread to help him hide better. Imagine the typical U-shaped spread with a tight clump of decoys at the bottom of the U and the opening of the U facing downwind. Most hunters set their blinds so that they are hiding in the bottom of the U and the geese are finishing in front of them, flying head-on into the wind. Fabro moves his blinds off-center (sliding up one of the arms on the U), so that when the geese finish, they’re not looking toward the blinds. Instead, they’re offering up a broadside crossing shot as they set down in the kill hole at the bottom of the U.

“When geese see spread after spread that all look the same, just making a small change like moving the blinds off to the side can make a big difference,” Fabro says.

Early-fall local geese are not nearly as hardy as the late migrators with their heavy down coats and thick layers of stored fat. So if you’re shooting local birds over decoys, opt for No. 2 shot. When winter winds push down those northern birds, increase your shot size to BB or even BBB.

“Short-reed goose calls are the hot trend, but don’t underestimate the flute call. The different sound and tone can sometimes be a game changer.” —Wayne Radcliffe

Waves of black, honking Vs pointing south, riding a cold tailwind, is a harbinger of winter. But fewer southern and mid-­country states are seeing the massive migrations of Canada geese that they used to, according to Dr. Tom Moorman, chief scientist for Ducks Unlimited.

Canada geese are big-bodied, hardy birds, and they can store plenty of fat to survive in cold weather. Mississippi Flyway geese, for example, breed around James Bay and Hudson Bay and will migrate only as far south as necessary to find open water and a good food source. So, easier winters with minimal snowfall and farming practices that leave more food in the field up north means that geese don’t have to migrate as far south.

“It takes a tough winter to push them south,” Moorman says. “Geese will winter as far north as Wisconsin if they don’t get pushed.”

And because geese migrate in family groups, when young geese are conditioned to shortstop their migration, they’ll continue doing so as adults, he says.

Moorman has witnessed the migration shift on his home hunting grounds in Arkansas. Decades ago, Moorman used to kill piles of Canadas there during the fall, and now that’s a rarity. However, these days white-fronted geese (aka specks) and snow geese regularly show up during the duck season. Traditionally, these birds wintered down on the Texas coast.

Overall, Canada goose populations in every flyway are either stable or increasing, according to the most recent U.S. Fish & Wildlife survey. And booming local populations of Canada geese continue to give hunters an opportunity at special early seasons in some states (North Dakota, for example, has an August season). But other traditional waterfowl hunting destinations are on the outside looking in when it comes to migrating honkers.

“The [wintertime] distribution of Canada geese has changed, and it’s been going on for a while,” Moorman says, “These are highly adaptable birds doing what they do best.”