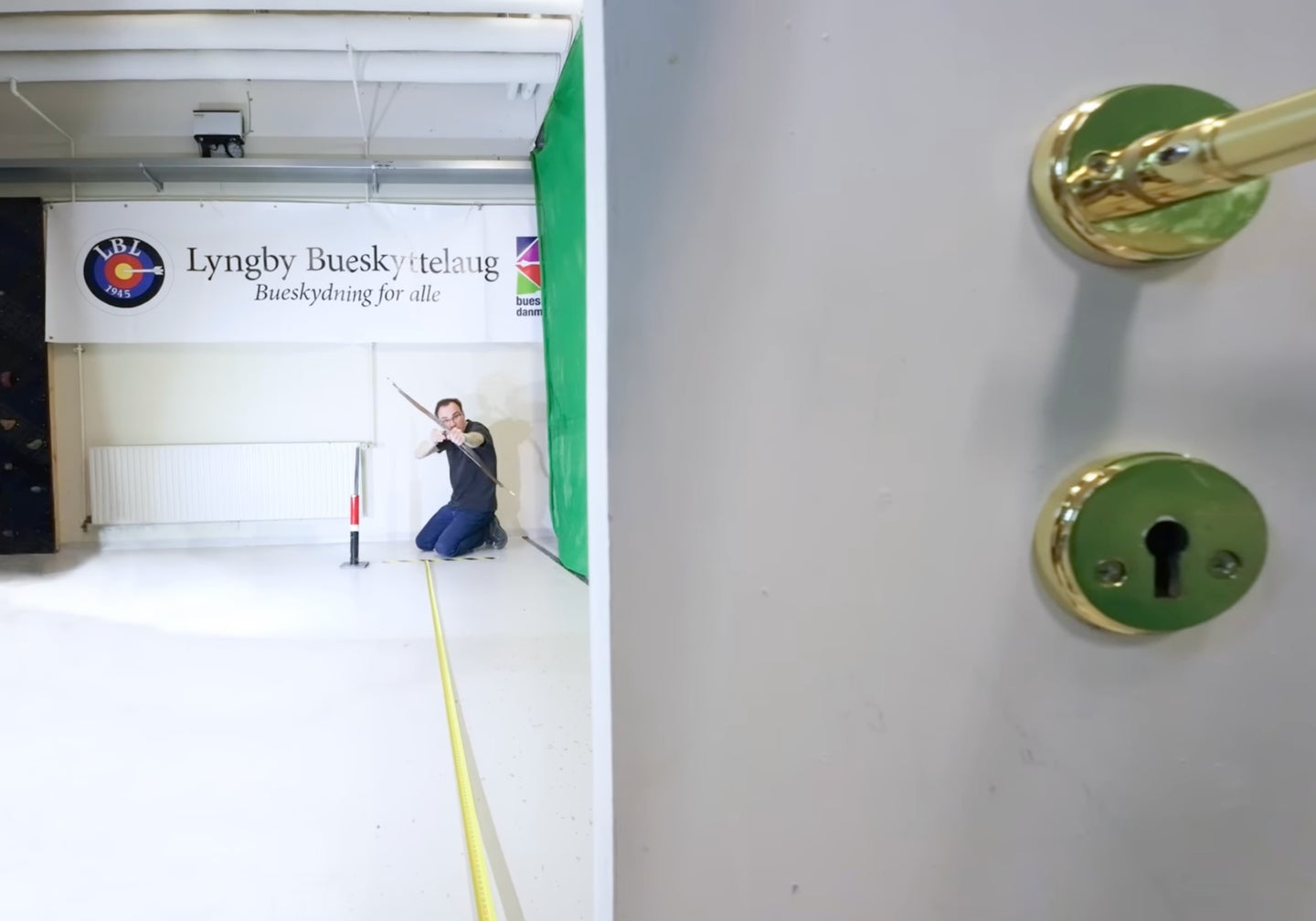 A Danish archer has proven himself the master of extreme archery shots once again with an accomplishment that might sound impossible. On June 1, 2022, Lars Andersen successfully shot seven consecutive arrows through a keyhole in a door. He used a traditional bow to fire all seven arrows from approximately 30 feet away. Andersen received a Guinness World Record for “the most consecutive arrows shot through a keyhole” and posted a video of the feat to his YouTube account last month.

As noted in the minute-long video, the keyhole was less than a centimeter wide, leaving just a few millimeters of wiggle room for his arrows. Andersen notes in the video’s caption that he’s shooting carbon arrows with no feathers to ensure a full pass-through. He uses a traditional Turkish bow handcrafted by father-son duo Metin and Onur Simsek, who own and operate Simsek Bow in Bursa, Turkey.

Andersen, who is in his late 50s, already holds the title of the “world’s fastest archer”, and according to his website, he was the first person in modern times to shoot 3 arrows in 1.5 seconds. He is passionate about historic archery and has amassed quite a YouTube following. Whether he’s firing off quick shots, hitting moving targets on the run, catching arrows shot at him and returning fire with them, splitting his arrows on a blade from a distance, or pulling off a variety of other tricks, Andersen is slowly trying to bring historic archery back from the history books in the face of what he calls “Hollywood archery.”

He points out in a 2015 video (which has received 60 million views) that traditional archers didn’t use back quivers, as they were clumsy to draw from and slowed archers down. Instead, archers often held multiple arrows in their draw hand and fired through them rapidly. They also shot arrows from the right side of the bow rather than the left, which further trimmed the time needed to get shots off. He cites Syrian history that dates the practice to at least 5,000 years ago and a book titled Arab Archery, written by Nabih Amin Faris and Robert Potter Elmer.

“This is the best type of shooting and there is nothing beyond it in power or accuracy,” writes Faris and Elmer.

Andersen is also a painter and writer. He’s only been involved in archery for a little over a decade, but in that time he has practiced extensively in what looks to be an archery gymnasium of sorts.

“Historic archery is a lot of different methods and much is forgotten,” Andersen writes in his 2015 video. “But archery can be much more than we usually think!”