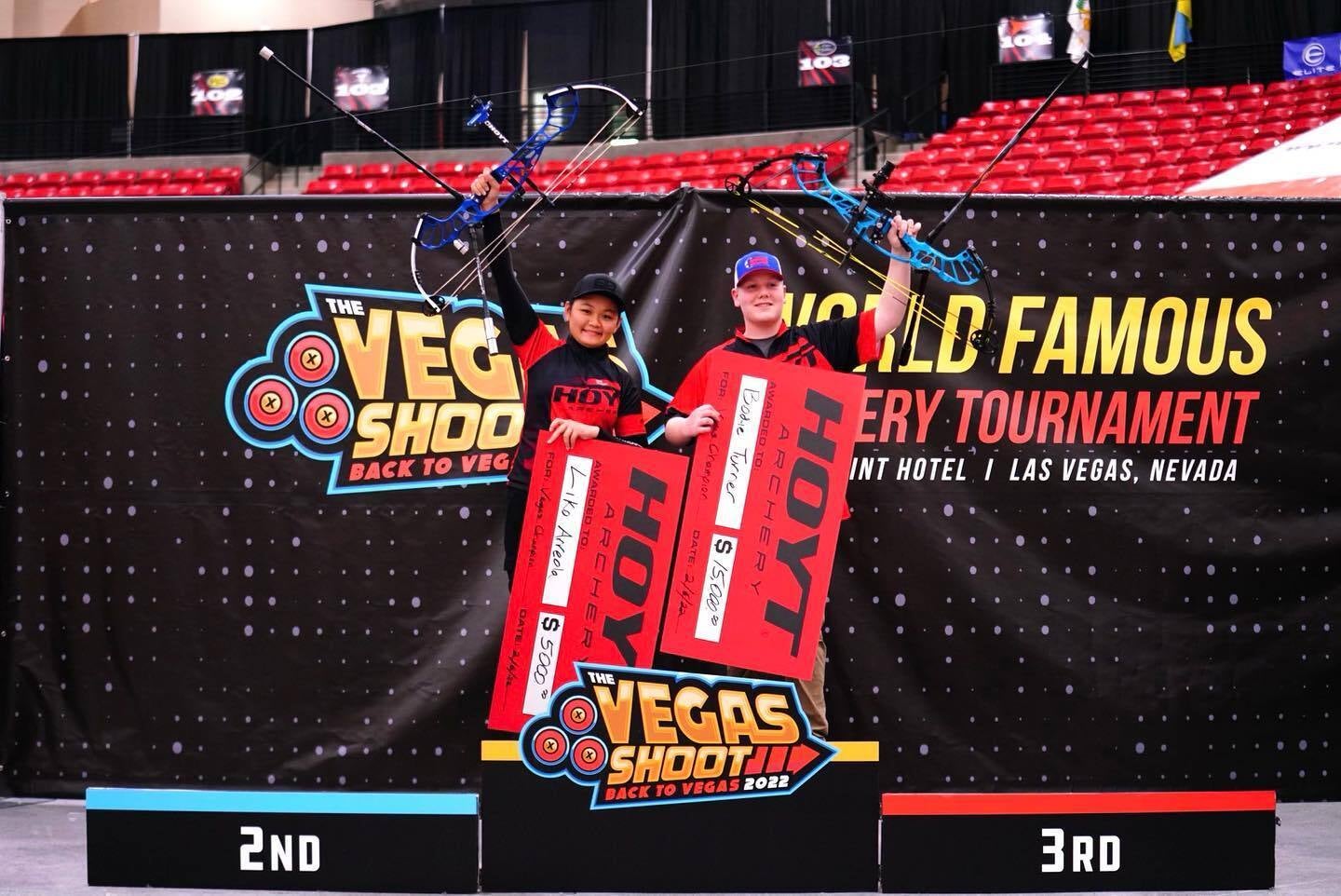 Thousands of the world’s best archers gathered over the weekend for the 2022 Vegas Shoot—the largest indoor archery tournament in the world. When the dust settled, a pair of teenagers won the open and women’s championship compound divisions, beating fields full of veteran pro shooters.

Bodie Turner, 15, of Washington, and Liko Arreola, 14, of Hawaii, both had to win nerve-racking shootoffs in front of thousands of spectators Feb. 6 at the South Point Casino and Hotel in Las Vegas to win the Open Championship Compound and Women’s Championship Compound divisions respectively.

Turner’s win capped one of the best two weeks of tournament archery in history. Keep in mind: He’s not competing in a junior’s division, Turner is shooting against the world’s best adult professional archers. On Jan. 28, he became only the third archer ever to shoot a perfect 660 qualifying score at the Lancaster Archery Classic in Manheim, Pa. That means he shot all 60 arrows into an 11-ring the size of a dime at 18 meters (20 yards).

On Feb. 4, 5 and 6, Turner shot perfect scores of 300 each day—30 arrows into a 10-point ring the size of a pre-2000 silver dollar—to qualify for the Vegas Shoot shootoffs. Twenty-two others from the slate of 211 entrants also qualified.

In the Vegas Shoot’s championship division shootoffs, all of the tied archers shoot one, three-arrow end at 40cm target faces that have the large 10-point ring, plus the dime-sized, inner X-ring. On that first end, the large 10-point ring is worth 10 points. In the Open Championship Compound shootoff, all 23 archers shot perfect scores on that first end.

For the second and all following ends, only the inner X-ring counts as 10 points. Once the shootoff moved to that scoring format, archers started dropping out, while Turner stayed clean.

After six ends, the field was whittled down to just Turner, Dan McCarthy, Sergio Pagni and Nick Kappers. McCarthy shot a 9 on his first arrow and Pagni mistakenly released an arrow for a 0. Kappers and Turner stayed perfect.

With just Kappers and Turner shooting the eighth end, both scored 10s with their first two arrows.  Kappers then slid his third arrow just outside the 10-ring for a 9, leaving Turner with the last shot. After an audible gasp from the crowd following Kappers’ 9, Turner took careful aim and released his last arrow that struck the left side of the 10-ring to take the championship.

For the win, Turner took home the tournament’s top prize of $50,000. To that he added thousands more in contingencies from manufacturers of the equipment he shot, including $15,000 from Hoyt, $5,000 from TRU Ball/Axcel and $1,500 from Easton.

“Qualification rounds were tough,” Turner said after his win, referring to the three 300s he shot.

“The shootoffs were good… Got out here, shot some good shots and ended up being the last one. So, it worked out.”

Like Turner, Arreola also shot a perfect 900 qualifying round to get to the shootoff. But in Women’s Championship Compound, only three archers from the field of 79 competitors went to the finals – Arreola, Tanja Gellenthien of Denmark and Paige Pearce of California. Gellenthien and Pearce are both former Vegas champs and have a litany of wins in international competition.

Though still packed with pressure, the women’s shootoff was quick. All three archers shot perfect scores the first end. But in the second, only Arreola kept all three arrows in the middle.

In wining that title, Arreola was the only archer in her division to shoot a 900, so she won it outright. This year was her first time in a shootoff.

“A little bit more shocking,” Arreola said of her 2022 victory. “And a little more nervous for me because I’ve never done this shootoff before.”

Along with the title, Arreola pocketed $10,000 from the Vegas Shoot, plus thousands more in manufacturers’ contingencies, including $5,000 from Hoyt.