7 Tips for Bowhunting Turkeys this Spring

Taking a gobbler with a compound is tough enough. Don’t sabotage yourself this turkey season by making small mistakes. 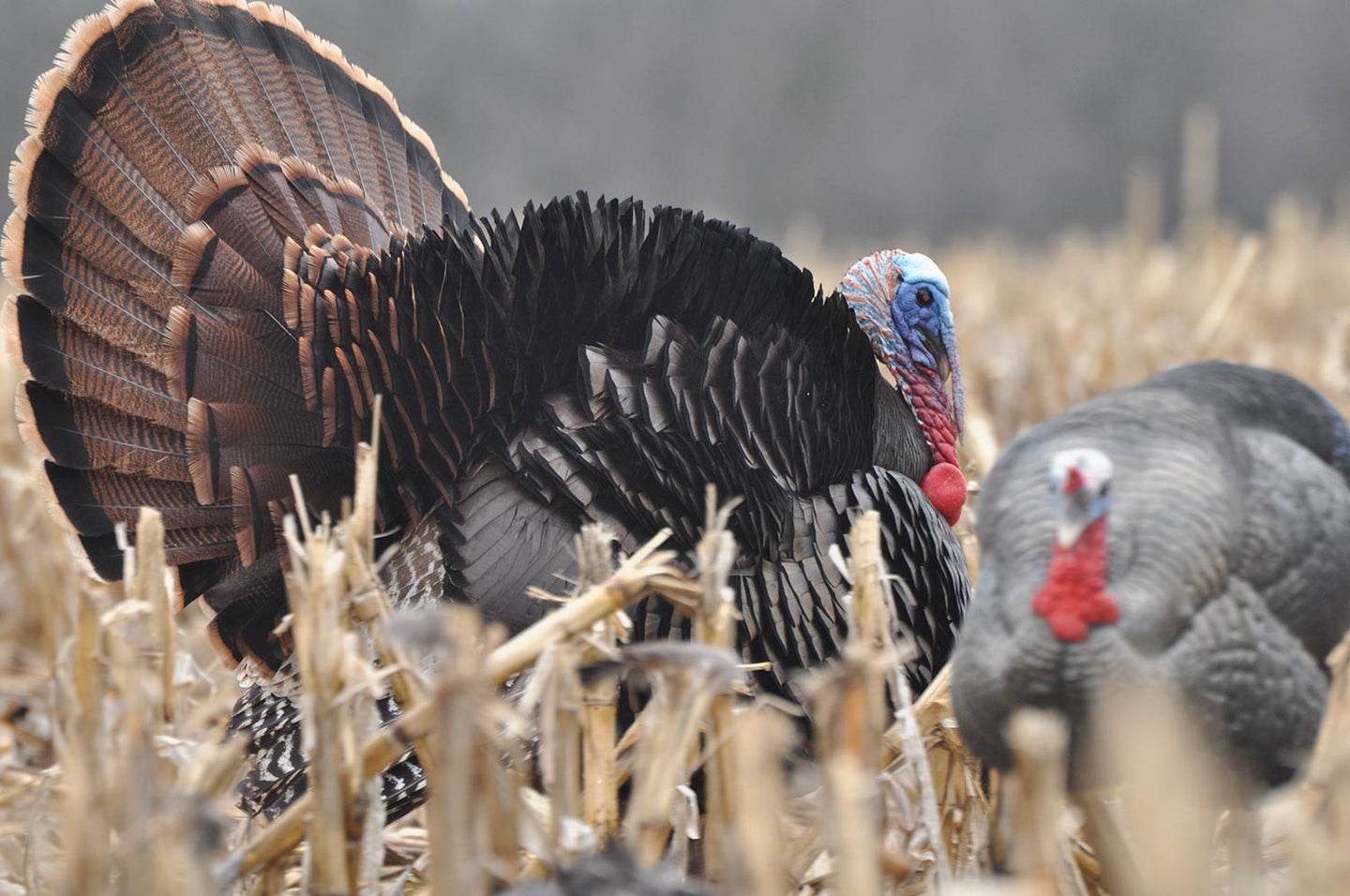 Not every gobbler is going to come into the decoys full strut, so be patient and be alert. Tony Peterson
SHARE

Archery hunting spring longbeards is popular, but it’s not easy. The difference between what has to happen to fill a shotgun tag on a turkey versus what has to happen to skewer one with an arrow is as wide as the confluence of the Mississippi and Ohio Rivers. While it might seem as simple as popping up a blind in a field and yelping until a gobbler struts in, there’s usually a lot more that goes into a successful hunt. Here is how to punch your tag this spring.

When you stuff a trio of 3.5” shells into a shotgun and hit the woods at first light, the plan is usually to hear a gobble and get moving. After that it’s a cat-and-mouse game that might involve putting your back to several trees in an attempt to get the bird within that magical 40- or 50-yard line. Then it’s jellyhead time.

When it comes to bowhunting and blinds, the mobility is gone, which means you better be in a spot that the birds want to be in. The only way to ensure this is through scouting. Spending a few days walking the woods and looking for fresh sign, not only beneath roost trees but anywhere the birds might be feeding, will start to clue you into the daily travels of the neighborhood flock.

If you have the option, throw up a couple of trail cameras as well. This will give you the chance to monitor wooded logging roads, small clearings, or simply the field edge that has the most tracks. What you’ll see when you check the camera, are all of the day-long visitors. If you’ve set the date and time stamp correctly, you can dial into the times of day when turkeys are most likely to visit your spot. Better yet, use video mode and set it for the longest-in-duration recording setting. I use two minutes, because if the hens walk by and trip the trigger, it might be 45 seconds before the toms strut through, and I want to see every member of the flock every time they walk past.

Brush in The Blind

In the good old days of turkey bowhunting, the birds didn’t seem to understand blinds. That’s not the case today, unless you’re hunting unpressured turkeys, which are a rare commodity. When you’ve narrowed down a hotspot, grab a rake and a saw, and really brush in your blind. You want to make sure it is deep in the shade and not going to blow up in the slanted sunlight of morning or evening.

You also want to be able to sit in the back of the blind where it’s darkest, so make sure you can put your decoys in a place that allows you to shoot from the back of the blind. I can’t stress this enough, because while blinds are amazing for allowing us to move, they aren’t magic. With early morning sunlight breaking in, you can (and will) get busted if you’re not careful.

Here’s the thing about decoys: The most expensive options on the market are the best. Nothing has changed my turkey bowhunting success like splurging for a flock of Dave Smith Decoys. Since then, I’ve got to know Dave and asked him his advice on this topic. He put it simply by saying, “Without a doubt, the more realistic a decoy is, the better it’ll work. This goes for the look, but also the body posture which is why we create our gobbler and jake decoys with aggressive or assertive poses to cover all types of hunting scenarios.”

These specific body poses are the result of watching live bird interactions to settle on specific postures that elicit specific responses. This is the key to getting a reaction out of birds and persuading them to commit. Once they do, they often go into a decoy trance. Nothing makes bowhunting turkeys more fun and easier to kill than a ticked-off bird that is so focused on a submissive jake that he’s incapable of focusing on anything else.

Calling in turkeys isn’t rocket science, but there is more of an art to it than some people believe. This is most true when bowhunting birds, because you want them close and comfortable. One of the beautiful things about bowhunting turkeys is you get to hear a lot of subtle chatter from hens that will swing over and feed their way through your spread.

Like when a family of raccoons passes by and you realize they are chittering nonstop, so to are the lady turkeys. There are so many purrs and clucks and barely audible yelps that it’s hard to believe you weren’t more aware of the conversations being had out there.

As turkey hunters, we often focus on the loud yelping and cutting to get a bird’s attention. That’s fine, but when pressured birds get close to the red zone, they often want to be whispered in. This means you need to know how to hold a fake conversation with two calls at one time—like ladies spreading gossip after church. The National Wild Turkey Federation has vocalizations you can listen to that will help. Focus on mastering the cluck and purr, purr, and putt.

Take Your Time When a Tom Shows Up

If you’re saying the right things and have good decoys out, you’ll often have early-season gobblers come streaking in and start fighting. This is tied to not having been hunted for months, and the reality of just breaking up from the flocks and still being in a fighting mood. Later in the season, the birds tend to take their time approaching.

In that case, and any time when a bird isn’t hell-bent on suicide, the time he takes to make up his mind is the time in which you can absolutely blow it. One tink of an arrow hitting your blind chair, or the rustle of a candy bar wrapper and his little brain might go into survival mode. If he catches a flash of movement in the blind window as your top limb passes through a spear of sunlight, you’re toast.

Let the decoys and the calling do the job. A bird that stands at 50 yards and stares holes into your setup is making up his mind. Some birds won’t commit no matter what, but many will. Don’t do anything that will make him go away. This also means it’s a good idea to put the smartphone down and pay attention to what’s going on around your blind so that silent approach bird doesn’t catch you scrolling.

Practice on a 3D Turkey

I put my decoys out about five to seven yards from the blind, because I want the easiest shot possible. A tom at 7 yards means I’ve basically got to keep my act together enough to hit a volleyball at that distance (I’m a body shooter, not a head lopper). While that seems like an easy shot, it’s often not. Turkey fever sets in and your target is moving as he struts through or swats your jake. You’ve got to put your pin on his vitals, no matter his body position.

Too many bowhunters lose their cool in this moment and just bury their pins on the whole turkey. This results in either a miss, or a non-vital hit which is far more common than it should be. This is also why I highly recommend buying a 3D turkey target and using that for practice before your hunt. Bullseyes on flat-faced target are fine for some practice and sighting in, but if you want to be good at shooting turkeys shoot at something shaped exactly like a turkey. I use two— a stander and strutter—and I practice at ranges out to 40 yards, which makes seven seem easy.

Make Sure You Have a Second Arrow Ready

Last spring I sat in a blind in Minnesota in mid-April. The early morning had been a bust, but it was sunny, warm and looking good for mid-morning action. At 9 a.m., a bird gobbled and almost as soon as I called back he started strutting in. When he saw my Jake decoy crouching over the laydown hen, he sprinted in and hit the Jake so hard he bent the metal decoy stake.

I shot him square through the chest (on video, so I know), and he walked off five yards and stood there before turning around and coming back. I frantically yelped with a mouth call while scrambling for a second arrow. He caught me, but before he was out of range I shot again, this time anchoring him. When I butchered that bird, I checked out the wound channel from the first shot. It was impressive, and he shook it off like nothing.

Some critters are tough, and turkeys qualify. Have a second arrow in a safe but very accessible place, just in case. That old Minnesota bird from last year wasn’t my first go-round with having to shoot one twice, and it was a dumb mistake to not be more prepared. On that note, that’s also one of the reasons why I like mouth calls. Sometimes you need to sound like a turkey while your hands are occupied.