Norway's melting glaciers have revealed arrows, hunting blinds, and other ancient treasures dating back more than a thousand years 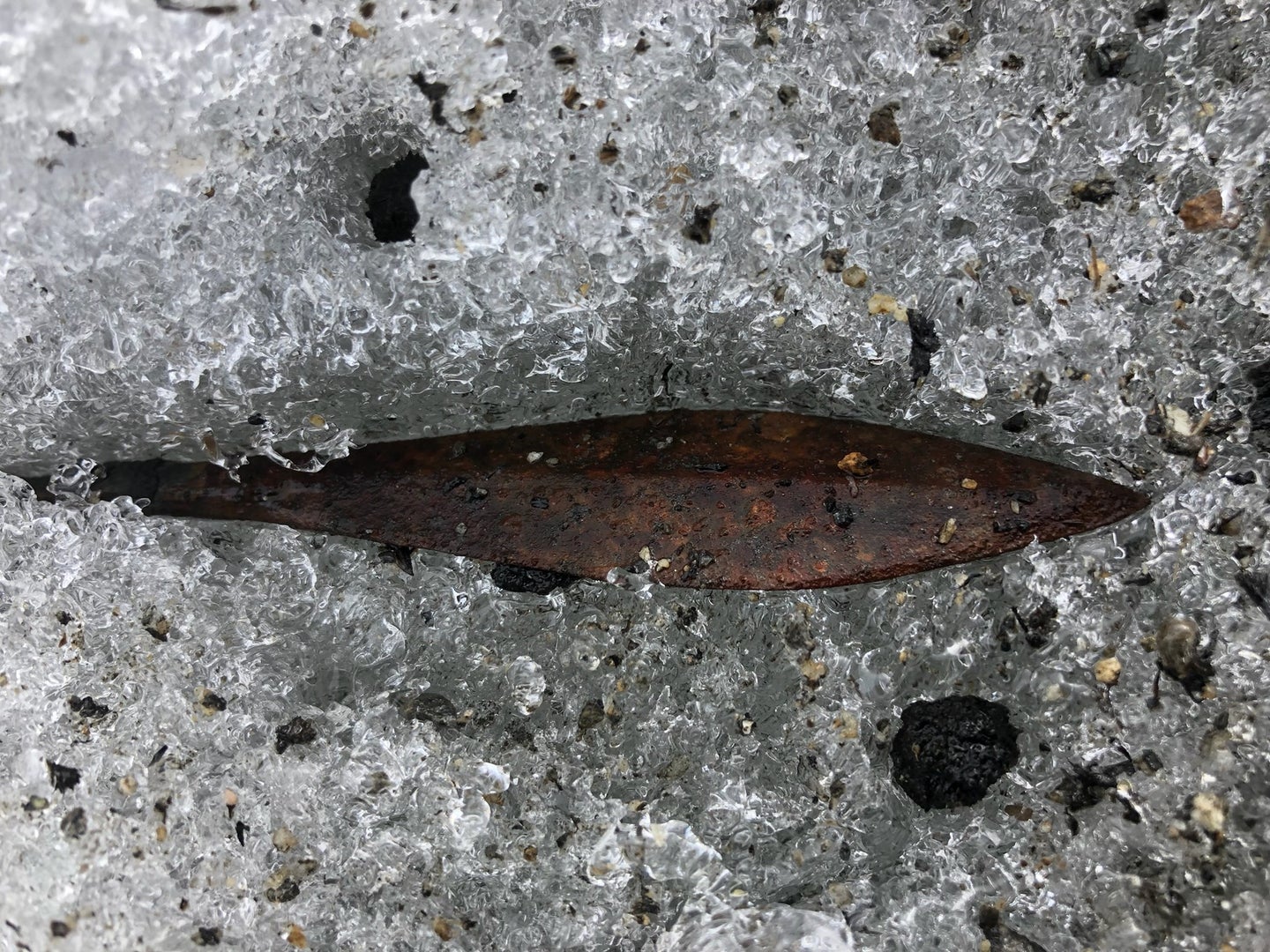 Some of the iron arrowheads discovered by archaeologists predate the Viking Age. Secrets of the Ice, via Facebook
SHARE

With crampons strapped to their feet and ice axes in hand, a team of glacial archeologists have slowly been excavating melting glaciers across Innlandet County in Norway. The project began back in 2006, when “the first big melt hit our mountains,” says the Secrets of the Ice team. Curious as to what might lurk beneath the layers of permafrost and ice, the archeologists have since discovered arrows, hunting blinds, and other ancient treasures that predate the Viking Age.

In February, the team confirmed some its findings on Facebook. On their latest expedition to the inland mountain peak known as Sandgrovskaret, the archaeologists discovered arrows, scaring sticks (more on these later), and stone-built structures that were used as hunting blinds by bowhunters centuries and, in some cases, millennia, ago.

“When the reindeer had approached to within 10-20 meters [33 to 66 feet], the hunter would get up and start shooting arrows,” Lars Pilø, co-director of the Glacier Archaeology Program and the editor of the Secrets of the Ice website, told Live Science.

Pilø and his team initially found the archeological site in 2013, but it wasn’t until 2018 that they were able to return to complete a “large systematic survey.” As part of the survey, the team mapped out 40 different hunting blinds at the Sandgrovskardet site alone. Glacial fieldwork is tricky, and it requires skill as well as speed.

“Time is limited and we need to get the job done and get off the mountain before nightfall,” writes Pilø on the Secrets of the Ice website. “If it is a small site with just a handful of finds, we will document and collect those.” Otherwise, they “collect fragile finds that do not look like they will survive until the next visit.”

There are still approximately 151 potential glacial archeological sites that the team plans to explore. In Innlandet County alone, the team has identified 65 sites that spread across Jotunheimen, Dovrefjell, and Breheimen.

“We have a window of opportunity from August until the snow falls, where more items might surface and we can go rescue them. So every year we have to plan and prioritize,” archeologist Espen Finstad told ScienceNorway.no.

When the team went back to the Sandgrovskaret site in 2018, they hit pay dirt. They found five arrows, and three of them still had the “preserved iron arrowhead[s].” These are “likely to date between 300 and 600 AD,” according to Pilø, who added that each one “is a rare type not found at the ice [or] in graves in the lowlands either.”

As for the other two arrowheads? Pilø believes they are even older, and could date all the way back to the first millennium BC. The other discoveries provided clues as to how these early mountain dwellers were able to hunt successfully. The stone-built blinds—which are basically rock walls arranged in a half circle—were constructed far from the nearest settlement at between 5,500 to 6,500 feet above sea level. This led researchers to believe that the hunters intentionally decided to hunt where the animals were.

The settlements where Finstad believes the bowhunters lived were discovered by the team about a year ago, and these date back to the Viking Age and Early Medieval period.

Along with the arrows and hunting blinds, archeologists came across other remnants from the long-ago big-game hunts: 32 scaring sticks. Some were still “lying in a line, indicating where a type of psychological fence for reindeer once stood,” according to a post on the Secrets of the Ice Facebook page. Researchers have discovered thousands of similar sticks at other ice sites in Oppland County. A scaring stick is a roughly three-foot long wooden stick with a flag or some other light object attached to the top. These were used to direct game toward the stone blind where hunters waited.

“The key point here is that reindeer are very sensitive animals and tend to shy away from human-like silhouettes or moving objects,” Pilø writes. “The ancient hunters knew this, and they used their intimate knowledge of the natural behavior of reindeer to lead the animals to good hunting spots by way of raised stones or lines of scaring sticks.”