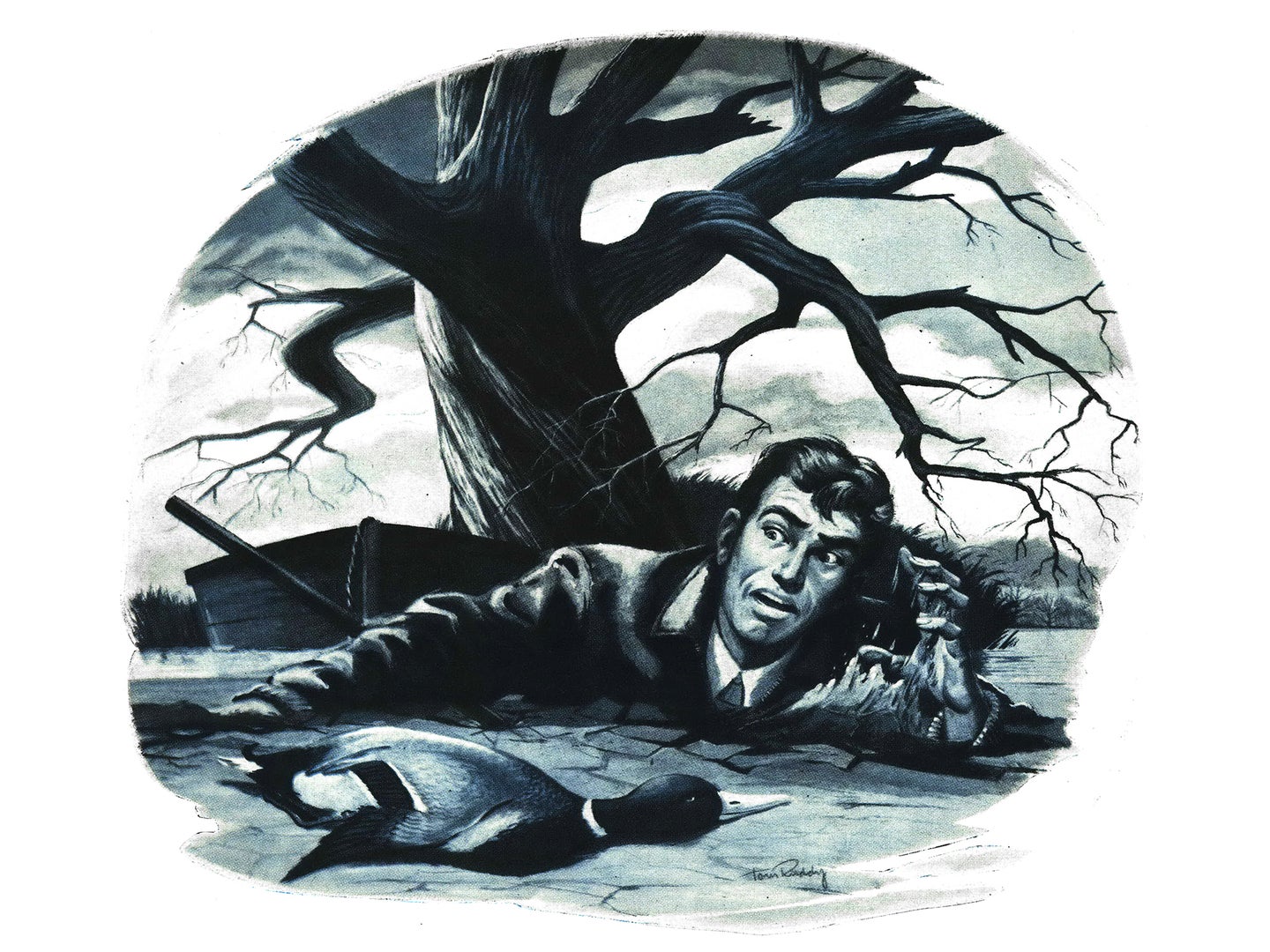 “Two Feet in the Grave,” with an illustration by Tom Ruddy, originally ran in the April 1952 issue. Outdoor Life

This Is Why I Won’t Duck Hunt Alone Anymore, From the Archives

This story, “Two Feet in the Grave,” originally ran in the April 1952 issue of Outdoor Life.

I DON’T LIKE to hunt alone. Too many things can happen to a man. He lets his ax slip or has a bad fall or makes a dumb move, and then he’s in trouble, with no partner to help him get out of it. I know. I went out alone for ducks a couple of seasons ago, and nearly disappeared from the face of the earth.

Some friends and I have a duck camp on the Red River, which divides Texas and Oklahoma and flows into Lake Texoma. There’s plenty of duck food in that area, and Texoma is a fine duck haven. But we like to hunt upriver a few miles, so we can get them coming and going from the fields.

I had a tentative date with a couple of the fellows but at the last minute their wives began twisting their arms and they stayed home. My wife put a half nelson on me too, but I managed to get away and drove up to our camp. It’s on a small cove of the river, and the water is clear right out to the main channel. The river itself is full of deep silt, except for the channel. If the water level drops a bit it’s impossible to push a boat out from its shores, so there’s no place for a camp.

I was out of the sleeping bag by 5 next morning and ready to launch the boat, which we had left on shore. I slipped into my waders, stowed my gear in the boat, and shoved it across the mud into the water. The wind was roaring through the trees, and low, scudding clouds obscured the eastern horizon. That was all to the good; the blow would discourage the ducks from rafting, and keep small flights of them cavorting up and down the river.

Our blind was several hundred yards upriver from the camp. We’d placed it on a large silt bar near a sheltered stretch of water. No matter which way the wind blew, from north or south, the waters around the blind were quieter than on the open river.

I’d got my decoys out, concealed the boat in the blind, and was loading my pump shotgun when a flight of several dozen mallards came over. A hen was in the lead, a wily old bird that twisted her head from side to side as she chattered at the decoys. I turned my call downward and gave a soft answering yip. Six times the flock worked over the blind, their light underbellies bright against the gloom, their long necks outstretched. But there was some thing about the layout that the old girl didn’t like. Finally, with a sharp call, she pulled the flock upward like so many puppets and headed west.

But then a hen and a drake—maybe tired of the old girl’s tyranny—peeled off the flight and coasted toward the decoys with set wings. I pulled down on the drake when they were about a foot off the water. He dropped, and the hen shot up like a rocket. I got her, too, after a bad miss.

I paddled out and retrieved the mallards before the river current stole them. Just as I got back into the blind a flight of four came over. On their second pass they were low and still fast, but I hit a drake. The wounded bird struck the water between the blind and the silt bar, and started swimming in a circle. I was about to finish him with another shot when, curiously enough, a hen out of the same flight came over the blocks. Obviously confused, she bored straight in, then flared wildly when she saw me standing in the boat. I got her at the top of her climb and she fell beside the boat.

I looked around for my wounded drake. He had swum to the silt bar and was now walking across the dry crust, dragging a broken wing. I hurriedly shot him, and he flattened, bill down and wings outstretched.

Before the hen could drift away, I poked out the pole and pulled her with in reach. Getting the beached drake would be another matter. But since no other flights were heading my way, I decided to give it a try.

It was fairly easy to paddle most of the way to the silt bar, but when the water shallowed to inches I had to pole. By the time I had pushed the craft up to the edge of the caked, dried silt, my arms and shoulders were aching. With the bow smack up against the crust, I was still about fifteen feet from the drake.

I thrust a foot over the bow and tested the crust. It gave slightly but seemed fairly firm. With the pole in my hands, I stepped gingerly out of the boat and eased along about five feet until I could touch the drake with the pole.

Maybe I got careless, or maybe it was my rocking motion as I worked the duck toward me. But just as I was about to pick up the bird my left foot crashed through the treacherous crust. In a moment my leg was hip-deep and the silt was pouring into the top of my wader.

Instead of lying flat across the pole and trying to tug my leg out gently, I instinctively threw my weight onto my right foot. It crashed through the crust, and almost immediately I was waist-deep in a well of slimy ooze—and going down fast.

My back was to the boat. Frantically I twisted the upper part of my body around toward it and placed the pole across the break-through. It held me up for a few seconds, but then one end broke through the crust, and I started sinking like lead. I lunged forward and spread my arms across the crust, hold ing on like a skater who has broken through ice. Minutes became eternities as I felt the cold silt flow into my leather jacket, ballooning it out into a heavy sack that dragged me deeper into the grave of muck.

Next I tried to pull myself out onto the near-by crust, but my elbows immediately broke through. I fell forward and threw my arms over an unbroken patch. The cold silt was now up to my shoulders, and I was filled with despair. The next break-through would drop me mouth-deep into the stinking stuff.

I heard a tractor bark into life far across the river. I called out, but the strong wind slammed the words back down my throat. Moments later I caught a glimpse of the tractor going over the crest of a hill.

Panic rushed over me as I felt the chill silt creep over my shirt collar and grasp my neck like cold fingers. The crust I was clinging to was bending under my weight. I thought of lunging forward and making a do-or-die try for the boat, but I knew my head would promptly go under the muck if I tried it.

The three feet of crust that now lay between me and the boat was a pressing problem. I would have to get rid of it if I was to reach the bow. Cautiously I shifted most of my weight to my left arm, then eased my right hand out and started breaking off pieces of the crust edge with my fingers. Slowly, inch by inch, I opened a foot-wide path toward the boat. When I had cut through about six inches I brought my right arm back, redistributed my weight on both arms, then worked my way into the new opening.

I maneuvered in this fashion until my right hand was about a foot from the boat. But now my fingers and the muscles in my forearm were so tired I couldn’t move them. I tried to turn .so that I could work with my left hand, but the crust bent ominously. I gave that up and wearily clung to the shelf of crust, carefully holding my head back so that my mouth stayed barely above the silt.

Again I tried to chip away the crust with my right hand, but the raw, bleed ing fingers couldn’t manage it. Then I noticed that the boat’s bow rope was hanging down, its end just inches from the crust. With a good lunge I might be able to reach it.

SPREADING MY ARMS out over the crust, I took a deep breath and tried to pull myself out on top of it. The crust immediately broke. Wildly I lurched forward. My fingers grasped the rope just as my head sank into the silt and my mouth was filled with the gritty muck.

Frenziedly I clutched the rope and pushed my head free of the silt, gasping and spitting out the choking muck. But more than that I could not do, for the silt-filled waders held me down as firmly as anchors. Even now, however, I didn’t give up.

I rested as well as I could for a few minutes, then cautiously started to work my way out of the waders, loosening them with one hand while I hung on grimly with the other. It was a desperate struggle; the muck in the waders held onto my legs like the suction cups of an octopus. But inch by inch I freed myself from them. And finally, as though the devil were after me, I heaved myself up and over the side of the boat, and flopped exhausted on its bottom.

It began to sleet, and I felt as though I were turning into a block of ice. But I just lay on my back, unable to move. And finally—hours later, it seemed—I sat up, a silt-encased mummy, and slowly worked the boat away from the bar and out into deep water.

Back at the camp, as I washed the muck from my body and slipped into dry clothes, I thought that while solitude in lonely country may have its virtues, it’s definitely not for me. Hunt alone? You can have it!