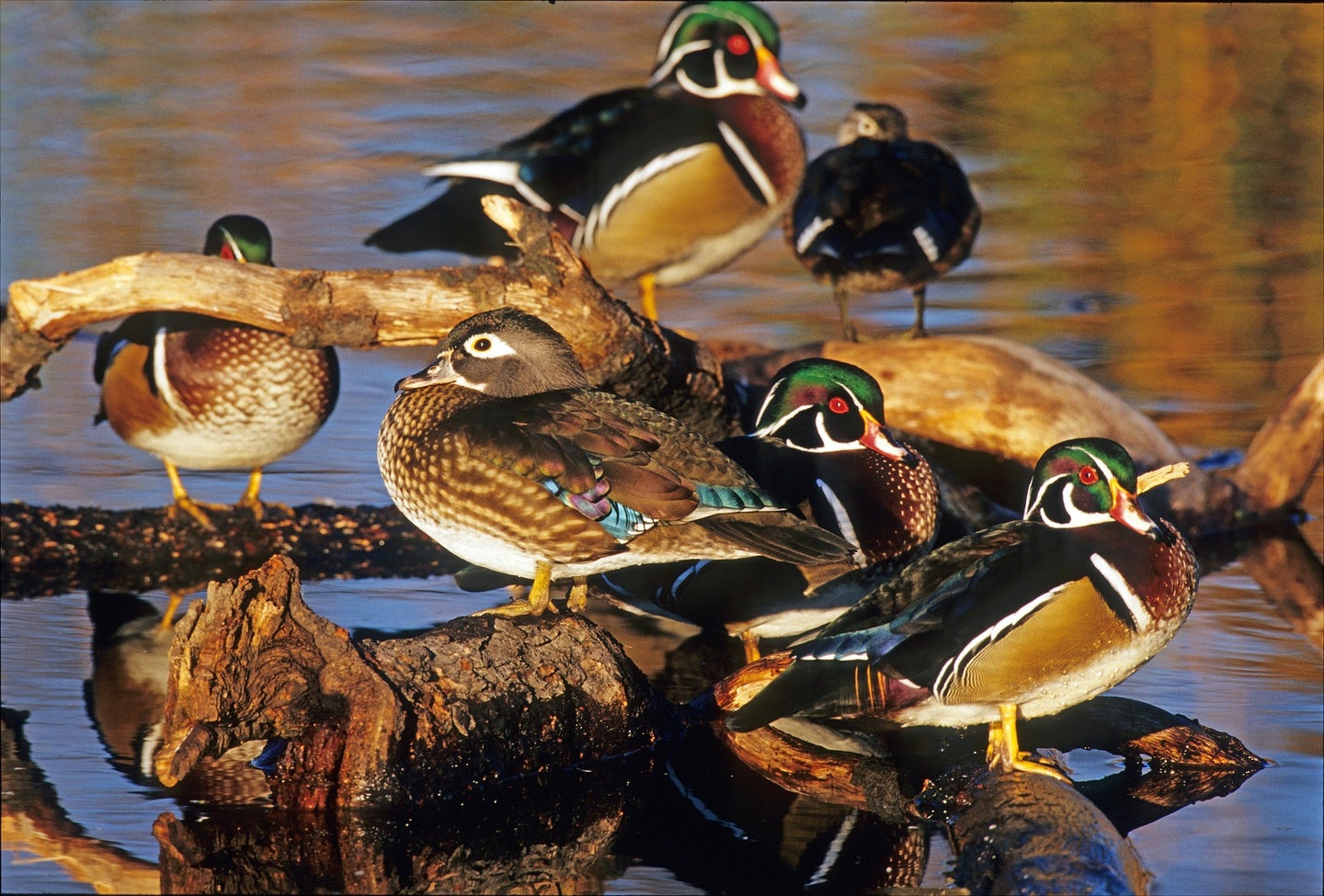 Southern wood ducks in all their glory. Pixabay
SHARE

All diehard duck hunters have their favorite species, and they’ll usually rank them something like this: greenheads, canvasbacks, and pintails. But living and hunting in the northern half of the Mississippi Flyway, my favorite waterfowl species is the odd and gorgeous little wood duck. They are fast and challenging targets, when they decide to decoy they do so with reckless abandon, and they’re one of the best-tasting ducks out there. To my eye, a plumed out drake is prettiest duck in North America (it’s closes relative is the Mandarin duck in Asia).

In the Eastern and Mississippi Flyways, wood ducks are abundant and accessible. According to Ducks Unlimited, wood ducks were second in total harvest in the Mississippi and Atlantic Flyways in 25 out of 30 years, second only behind mallards. Wood ducks hang out in tree-lined marshes, creeks, and ponds. You don’t need a massive spread and an expensive duck boat to effectively hunt woodies. You can usually decoy them in with about a dozen decoys and a wood duck call to get their attention. You can also drop a kayak or canoe in a wooded stream and jump shoot them out of a boat. But once temps drop close to freezing and the calendar turns to mid-October, wood ducks will start flocking up and heading south.

You can have good shoots on migrating woodies in northern states like Wisconsin and Minnesota, where I live, but also in the South, where the birds are headed to winter. The tactics and strategies that will be most effective, all depend on where, and when, you’re hunting. —A.R.

Hunting Wood Ducks in the North

At the beginning of the season, wood ducks are easy targets. They’ll usually dive bomb your decoys in singles and pairs and help you inch closer to an opening day limit. Migrators are not so easy. They usually push through the upper Midwest quickly. They don’t hang around until the water freezes up like mallards do. But if you scout diligently and time the migration right, you can have outstanding shoots on migrating wood ducks up north.

I usually do my scouting in the evenings and look for big flights of wood ducks coming in to mid-sized rivers and small marshes. Shallow lakes and rivers that have wild rice are also ideal spots to look for wood ducks. Wild rice draws in ringneck ducks and the first migrating mallards, too, which will keep you busy while you’re waiting for woodies. The more secluded a patch of wild rice is, the better it will hunt.

If I see a few ducks starting to drop into an area, I’ll usually wait around until sunset, because the big flocks of a dozen or more ducks will often buzz in right after dark.

When you find a roost area that’s full of ducks, you have two options: Try to pass-shoot them coming off the roost the next morning, or try to decoy them in the following evening. If you’re planning on a morning hunt, look for a corridor that will funnel the ducks past you. On rivers, this is easy and obvious. It’s trickier on big marshes, so look for wooded points that ducks will whip around. Throwing out a dozen decoys will help bring the birds close, even if they don’t lock up over the dekes.

For an evening hunt, get to your spot early, build yourself a good hide, and set up a small spread. If I’m hunting a larger marsh or lake I’ll throw out a few goose decoys near my little duck spread. The geese dekes have a larger profile and more drawing power. I’ve had woodies land right in with the honker dekes. There’s a good chance that a few ducks will trickle in well before sunset. Ideally you’ll be able to drop a few drakes (our limit up here is only three woodies so this could be a fast shoot) and get out of there well before sunset. That way the big flocks of ducks can still hit their roost undisturbed and you can hunt it again.

This is also where the small spread comes in handy: You can pick it up quickly and get out of there right at the end of legal shooting light. Wood ducks seem to fly in waves. You’ll get maybe two to four flights of birds right in a row, and then maybe an hour of empty skies. So when that first flight wings by, reload quickly and get ready for the next flock.

I’ve had the most luck killing wood ducks on overcast, windy days. They seem to get back to their roosts a little earlier on these days compared to sunny, bluebird days. The last and most important tip I have for hunting migrating woodies up north is this: Hunt them while you have them. They’ll be swarming your area one minute, and gone with the next cold, north wind. So if you find birds one day, plan on hunting them the next. —A.R.

Hunting Wood Ducks in the South

Most northern hunters will never experience a true wood duck migration day, but as the season rolls along down south, woodies will show up in big groups. Most of us see local wood ducks in singles and pairs early season, but they do fly in larger flocks later in the year. This is when you can grab their attention with a call.

“The key to getting wood ducks in the decoys is knowing how and when to call to them,” says Justin Martin of Duck Commander. “If you see a flock of 25 or 30 wood ducks, you need to use a sitting call, so they will hook in.”

Most of us are familiar with the squeal wood ducks make in flight, but that won’t lure them close, according to Martin, who only targets woodies these days when he gets a hankering for a good duck dressing or gumbo (they are excellent table fare). He still calls them in though, and lets them rest on the water to entice greenheads into the spread. You have to use their “sitting calls” in order to pique their curiosity. Once you do, the woodies bank in hard and decoy low on the water, much like a diver would. You don’t need to finish them with the call like you would a mallard.

“Wood ducks make about 100 different sounds and I know about eight to 10 of them,” Martin says. “The key is they have to be in big groups. If you see one or two woods ducks in the air, those are locals. And good luck calling them in.”

You will still want to target wood duck haunts. Think swamps, creeks, and rivers—basically anywhere you find water and trees. A migrating wood duck is still a wood duck, and it’s going to seek out its natural habitat. Fresh woodies also don’t fly as early as the locals you’ll typically see at first light. They often don’t start up until 8 or 9 a.m., so that’s another way to identify migrators.

Don’t use spinning-wing decoys for wood ducks. Like late-season greenheads, they know the Mojo game and will steer clear. Instead, get a few jerk rigs and a rippler, which mimics the small ripples live ducks make on the water. Wood duck decoys are good to have in the mix, but you can also throw out a few mallards or teal. Be cautious about using other species in your rig, though, because wood ducks are often solitary birds.

“You need to pull the snot out those jerk rigs when you see wood ducks,” Martin says. “And they love to land right on top of ripples. I’ve been in the duck woods many times and seen wood ducks land right in the water we just walked through. They’re attracted to that on-water movement.” —J.G.