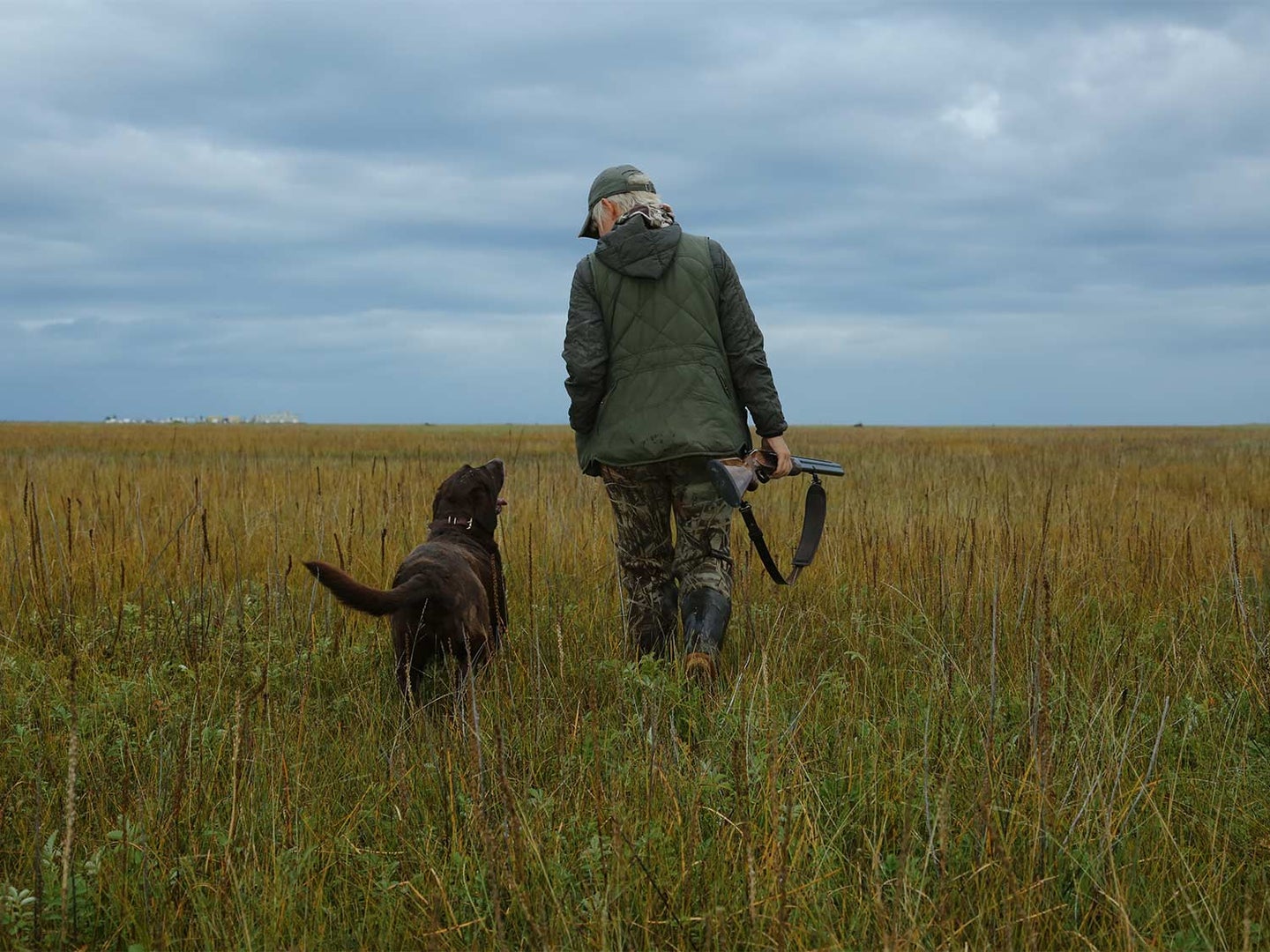 A hunter in camo and jacket holds a gun while walking through an open field. A hunting dog walks beside them. Steven Meyer
SHARE

There were a couple hundred mallards resting on the lake when Steve suggested we get closer. We’d been sitting behind the only cover around for an hour and a half, watching small parties of ducks taking off to feed. I still hoped some would pass our way, even as I braced for disappointment.

I heard shots in the distance, and not for the first time did I wonder how Steve’s father had managed to shoot more ducks than either of us in the past five days. Steve and I had hiked miles, kneeled in cattails for hours, and crawled through bean stubble in the rain. We covered what felt like every piece of property with a pond in Ransom County, North Dakota. At the end of the day, Steve, my partner who crawled just a little farther and waited just a little longer than I did, would bring back a few ducks. His father, who preferred easy access, consistently outgunned us both.

That day, Steve’s dad had stayed next to a small pond near a gravel road. While the remaining mallards on the lake sat tight and safe from us, he’d shot the only birds of the day as they made a pass that, to me, looked like chance. We might have had more energy, but he had luck on his side. And he had something else we didn’t have: a black Lab named Lady.

I had only considered getting a dog once, after Steve shot a pair of mallards that fell across a tidal slough at high tide back home in Alaska. Nothing we could think of would get us across the muddy bank and, finally, without a fishing rod or a safe way around, we gave up for the evening. The next day at low tide, we found only one of the two mallards. Steve mentioned for the first time it would be nice to have a retriever.

My first thought was about how everything in my house was white: the new sofa set, a fluffy rug, and the goose-down comforter. Sure, a dog would be nice to have in the field. But what would I do with it at home? Visions of muddy floors and clothing covered in dog hair dissuaded me. I preferred to be miserable and filthy out on the flats. I didn’t want to turn my living room into a kennel.

The day after our disappointing duck hunt, we went pheasant hunting—the real reason we traveled to North Dakota. We met up with Steve’s dad and his dad’s hunting partner, Eddie, at a pullout near a piece of CRP. A British cocker spaniel bounded out of the truck and sniffed the air.

“I’m getting too old for this,” Eddie said, nodding to the dog. “I mostly hunt for Windsor.”

“That seems backwards to me,” I said, shaking my head. I couldn’t fathom getting a dog so he could work for me, only to end up working for him.

But weeks later, I still couldn’t forget the image of Windsor’s head bobbing above the grass. He worked so hard for such a little dog, putting on six miles for each of ours. Watching him flush and retrieve pheasants was the best part of those days afield, and I remembered the pride Eddie so clearly felt—an unmistakable joy in a man who might not have left the house if it weren’t for his love of that dog.

If I got a hunting dog, I decided, I could train him not to jump on the furniture, and I’d wipe his paws before bringing him in the house. Such were my thoughts before I brought Jack home.

Read Next: Your Retriever Will Teach You These 5 Life Lessons

Jack was a one-year-old chocolate Lab, rescued from a family that had tired of his energy, and who neglected to disclose his extreme desire to snuggle after rolling in a moose carcass. Despite his charms, Jack would never hunt, due both to a pre-existing spine injury and an incredible lack of interest in work of any kind.

Steve could not resist rescuing another young chocolate Lab that was available at the same time. Gunner was a classic-looking waterfowl dog: a photogenic, nearly-black specimen of hunting strength and power.

Those mornings when the three of us sat in the blind, watching the flats come to life in quiet company, are some of the best of my life. Gunner seldom moved, but would look at us whenever he heard the far-off call of a lonely mallard hen or the whistle of wigeon wings. When you share enough time in the field, communication becomes the things you don’t say.

Because Jack would not hunt, I wanted a duck dog of my own. Cheyenne was a terror among her littermates. She fought the breeder’s shoelaces and pounced on a puppy pile from atop a kennel. The breeders appeared over-eager for us to choose her; even her own mother didn’t seem to like her.

“She has spirit,” Steve said, as I held another fat little puppy, asleep in my arms.

“Is spirit a good thing?” I asked, watching the smallest female pup headshake a shoe like a tiny tiger.

Since I did not know anything about picking a puppy, I set down the little pup, who never even woke up, and picked up the little terror.

Cheyenne ruined a lot of my things: a favorite pair of heels, a leather couch I thought I would own for the rest of my life, and my water filter—just before I needed it. She opened boxes of shells, ripping into the hulls and scattering pellets across the shop floor. When I yelled, her sheepish dance across the rolling mess was so cartoonish that, if my life ever flashes before me, that scene will be included.

She was a natural hunter. With little more than obedience training; she retrieved her first duck from a boat like a pro. And it just got better with every season. She would crawl alongside me to ponds She could smell ducks in nearby sloughs. She retrieved in running Cook Inlet tides (the highest in the country), slugging up mud waist-deep and holding the duck high.

Each time she brought back a bird, I cheered. In turn, she always circled me three times before handing it over. She might have been over-competitive with other dogs and sometimes unruly in the blind, but Cheyenne’s spirit was pure hunting dog.

Many years and many dogs have passed since I’ve had the chance to pick a puppy again. Cheyenne is now gray around the muzzle and footpads, and her hips have started to give out. Something happens in your heart when you carry an old dog out of a slough bottom. She becomes that puppy again, only this time she’s heavy with all your days afield and full of joy and sorrow wrapped up in wet fur. You feel you have bundled up in your arms your own broken life, a combination of puppy breath, bloody ducks, muddy and mildewed gear, and a love so big your heart might just explode.

I’ve said goodbye to dogs I loved more than humans. We took Gunner to the duck shack, intending to scatter his ashes and bringing them home again, unable to let him go. Jack’s ashes sit on my bookshelf beside those of Parker, our first female setter. But those losses have never dampened my need for another dog. My house is full of dogs now. In addition to Cheyenne, Steve and I have six English setters. And it’s still not enough.

This fall, I got a text from Steve while I was at work: “We’re going to go meet Rigby tonight.”

How do you pick a puppy? Plenty has been written about the subject. Theories have been tested, proved, and revised. Over time, though, bird hunters develop their own preferences, regardless of what the literature says.

When we arrived at the breeder’s, we found nine of the fattest black and chocolate puppies I’d ever seen, all running around a room that smelled like Simple Green cleaning solution.

I picked up a husky chocolate puppy, a 4-week-old who began to fall asleep in my arms just as another had done more than a decade ago. Only now, I know what it means to be nudged from bed on opening day by a dog eager to hunt. I know that if it weren’t for one spirited puppy, my foray into duck hunting might have ended like other hobbies I tried and discarded, the evidence of my abandonment still stacked in the garage. I know that if it weren’t for these animals, I couldn’t keep the fire alive. Duck hunting would have less meaning, and I wouldn’t get the push I need to get out the door, up the mountain, and into the snow and rain. Hunting for your dog, I’ve come to realize, is just as important as a dog who hunts for you.

Read Next: 8 Ways to Ruin Your Duck Hunting Dog

That’s why, when the breeder pointed out a little grizzly bear of a pup with tiny paws and folds of skin over his brows, I knew what was coming next.

“This guy follows me around everywhere. He’s got a lot of energy.”

Steve played with him on the floor, and I watched as the pup pawed his nose and climbed into his hat. I picked up the puppy and held him in front of me, peering into his still-blue eyes.

“Hello, Rigby,” I said. “We’re going to have lots of adventures.”