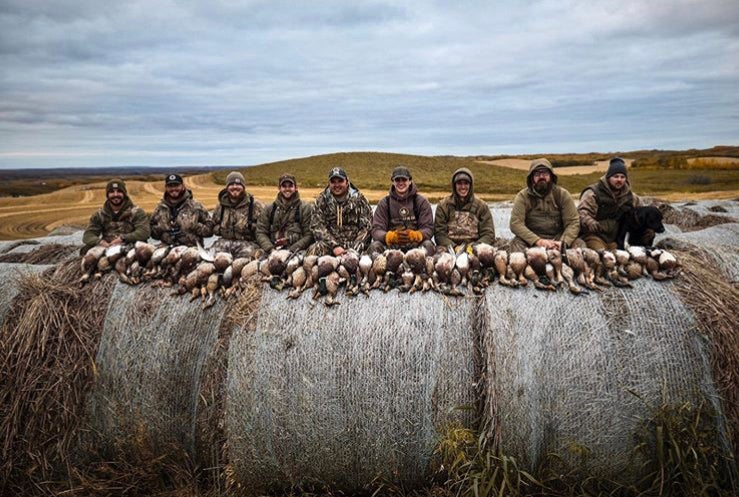 The results of a a two-hour hunt over water in western Alberta, where the limit is eight ducks per hunter. Pleas note: each hunter used a twisty tie or twine around the legs of their ducks to identify them. Andrew Klatt
SHARE

Every September (except last September, due to the Canadian-U.S. border closure) duck hunters head north to the western provinces of prairie Canada. Typically, they’re driving the biggest jacked-up truck you’ve ever seen and pulling a 30-foot trailer full of field decoys and blinds. They bring all this gear because field hunting in Canada is the ONLY way a majority of folks hunt up north. Hell, most Canadians don’t even own a pair of waders. But if you’re going with a small group of buddies—I’m talking four hunters or less—the best way to hunt Canada is to focus on water.

That probably sounds like blasphemy if you’re a crusty old codger who has been going to Canada longer than I’ve been alive. But I promise: It’s the ideal way to hunt the vastness of prairie pothole country, particularly if you want an experience that doesn’t make you so tired you need another vacation after your DIY trip. Here’s why and how you should only hunt ducks over water the next time you’re in Canada.

Don’t Take a Trailer-Load of Decoys

Other than crossing the border into Canada, the biggest pain in the ass for DIY field hunters is towing a trailer of decoys. First you have to drive it there for 20-plus hours, and once you arrive, you’re always hitching it and unhitching it depending on whether you’re hunting or scouting. Why not leave it at home? Just throw a dozen tor two floaters, a stack of mallard silhouettes, and a few spinning-wing decoys in the bed of your truck and call it good. That’s all you need to kill ducks over the water in Canada. Plus, you don’t have to wake up early to set dozens of field decoys in the dark. Just toss out the floaters 10 minutes before shooting time and have at it.

Everyone wants to go to Canada in September. It makes sense. None of us have cut a feather in months, and with liberal limits across the border it’s a great place to kill a duck. But I like to wait until October. By then, a good portion of the hunters have cleared out, the weather is turning cold (disclaimer: you do run the risk of a hard freeze), and the drake mallards are starting to turn green. It feels more like fall, and you have most of the prairie to yourself.

If you do have to go early, stay out of Saskatchewan. There are plenty of ducks and geese in the iconic waterfowling province, but also if you ask 10 American duck hunters where they’re going in Canada, all 10 of them usually say Saskatchewan. There are other provinces where you can have just as good of a hunt, and I highly suggest you go to one of them. For instance, southeast Ontario is one of the most underrated locations to hunt in Canada (more on that later).

When I was younger, I loved going to Canada and hunting twice a day: geese in the morning and a duck shoot in the afternoon. But that’s also a lot of scouting and decoy setting, mixed in with only some hunting. And if you field hunt, there’s a chance that you can get skunked because of a weather change or birds simply hopping fields. (Rain can really screw with geese in Canada because they will sit in a field all day and feed, and then may not even fly the next morning.) You’re also going to face more competition from hunters and outfitters strictly looking to hunt feeds.

Hunting ducks over water is far more relaxing because you’re only hunting once a day and you can count on ducks to come to water if you’ve scouted it right. You can scout in the afternoons and hunt in the morning (or vice-versa). A few years ago in Alberta, 10 of us field hunters took an afternoon to shoot ducks over water. We shot damn near 80 birds, in ones and twos, right in the decoys. The hunt lasted two hours (long by Canadian standards) and went down as one of the best shoots of our hunting careers. I’d rather do that every afternoon than run my ass all over western Canada wearing myself out trying to kill as many ducks and geese as I can for an entire week.

Focus on Small Wetlands That Are Close Together

One thing the pothole region has—when it’s not in a drought—is small, temporary waters that are in close proximity to one another. Ducks will trade from one body of water to the other, mostly to loaf and get a drink in between feedings. These areas are the best places to target puddlers. What you don’t want to do is hunt a larger wetland that is holding big numbers of ducks and geese. Leave those roost waters alone so you don’t ruin the morning for field hunters.

Even now on the drought-stricken prairie, there are still parts of Canada that have enough water for this type of hunting, it’s just harder to find. That’s good for water hunters because most folks will look for the big watersheds and focus on the fields that surround them. Meanwhile, you’ll be on smaller water shooting unpressured ducks.

Setup on Wetlands with Smaller Spreads and Available Cover

How you choose to hide and the amount of decoys you use will vary depending on the size and location of the wetland you hunt. I’ve hidden in cattails, found a stand of willows to crouch in, used brushed-in layout blinds on the edge of the water, and hunted out of A-frames. Whenever there is natural cover, I use that. No sense in brushing a blind if you can stand behind a tree. If it’s a small pond in the middle of an ag field with no cover surrounding it, I just brush in a layout with whatever chaff is leftover from the harvest.

For decoys, you can get away with four to six floaters and a few spinning-wing decoys. I like to use eight to two-dozen decoys with a few species mixed in. It doesn’t really matter what you choose. I use mostly puddle ducks on small potholes, but you can throw redheads or scaup in if you like. The white on their backs is a good visual for ducks to key on. You should bring mallard silhouettes as well, and plug them in along the bank.

Motion is what will attract most birds. There are so many juvenile ducks that haven’t seen a spinner yet that they can’t help but come in for a look. If you take three spinners to Canada, that’s plenty. You will kill ducks over them. I also like on-water motion, so a Wonderduck or Mojo Flock-a-Flickers are good additions to the spread.

Bring a Retriever with You

Many of the potholes you will be targeting have a false bottom, which means you can sink down to your waist in mud with each step even if the water is only ankle deep. I once had to crawl out of a marsh on my knees near Lake Winnepeg. Caked in mud and my waders full of water was not an ideal way to shoot ducks. It’s much easier to wade out a few steps, throw your decoys, and then send the dog every time you kill a duck.

Read Next: Our Obsession with Greenheads Is Ruining Duck Hunting as We Know It

The Best Places to Hunter Water in Canada