The Old Man and the Millennial

Younger generations might hunt differently, but the chase remains true to tradition 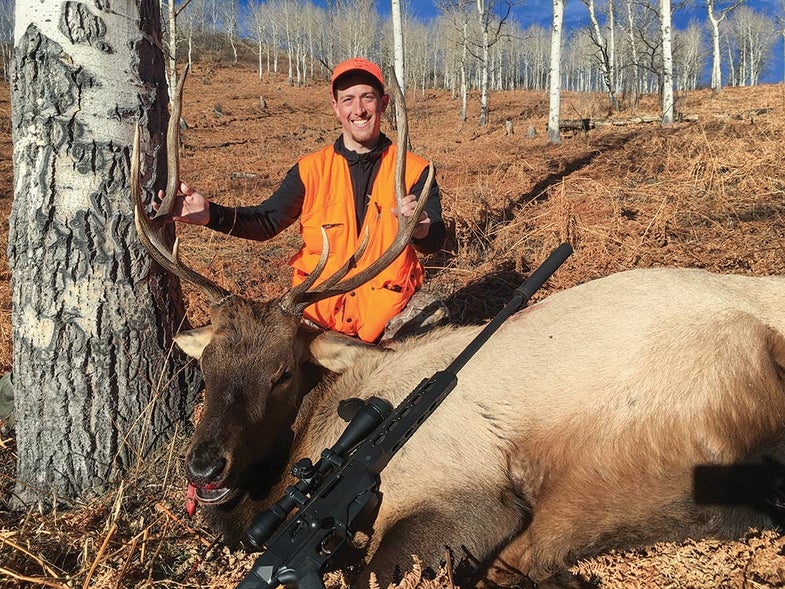 Beaman with his bull elk on the last day. Bruce Beaman
SHARE

My father and I began hunting elk together in the ’70s, and the camps from those days feature heavily in our favorite memories. We’d leave in the dark and return in the dark, hunting hard and often in solitude. Before two-way radios, self-sufficiency was critical. Now, at 71, I have become the old man in elk camp, which has grown to include a larger crew. This season arrived with 6 inches of fresh snow. As the seven members of our spike camp prepared to head into the woods, I requested a photo with the youngest: 28-year-old Mike Beaman. When the youngster stepped forward, the butt plate fell off his 16 ½-pound Remington 700 Tactical Chassis (complete with bipod and suppressor). We posed for the picture, and I wondered how long he would last lugging it up the mountain. Ups and Downs I eyed the kid as he sat on his cot, legs folded under him like a yoga instructor. We both used the same brand of ammunition, although he opted for .308 and I chose .30/06. I carried a CZ bolt-action topped with a 3–9X riflescope. His configuration meant that hunting on “low power” used 8.5X magnification, and his firearm seemed straight out of a scene in American Sniper. He unlocked his cell phone as I watched him. “Want to see my 500-yard shot?” he asked. Beaman tapped a button, and a video of the gong hit appeared. None of us connected in the first three days. We returned to camp in the dark, frustrated by the elusive bulls. On the fourth day, Beaman spotted a mule deer, for which he also had a tag. Fighting excitement, he raised his rifle, fired off-hand, and missed. Perhaps due to the unusual sound of the suppressed report, the buck stood and stared as Beaman cycled the bolt. His next shot was on target, and the deer dropped. I heard the shots and arrived on the scene, catching my breath as he told me what had just happened. His excitement was obvious, and I felt myself sharing it. He’d packed a sharp knife and game bags, but he’d never boned out a deer in the field and needed a hand. We worked together on the carcass.

As a reward for his success, Beaman slept in the next morning. What? You have an elk tag to fill, I thought. When the other hunters departed, he remained in his sleeping bag, wired to his cell phone. But on the last day, Beaman saw a legal 4×4 bull and didn’t hesitate. I probably logged twice as many miles as my millennial camp mate—I certainly left earlier and returned later. Ending camp with an unfilled tag was personally disappointing, yet Beaman’s double success was infectious, and his hunts boosted camp morale. This new guy—the guy with the giant rifle, who slept in and hunted near camp each day—was the only hunter among us to tag out.

Beaman’s outlook typifies the millennial valuation of experiences over property. He finds time to surf and skydive while holding a tech-management job. He lived with his parents until he was 27, which allowed him to save a good amount of his income. He recently bought a one-bedroom condo and his first piece of furniture.

Read Next:
Why We Suck at Recruiting New Hunters, Why It Matters, and How You Can Fix It

His approach to life (and that of his peers) differs from what I’m familiar with—just as his approach to our hunt differed. I was his age when I tackled my first elk hunt, and I’m sure my newfangled gear and youthful thinking seemed abruptly modern to the old-timers in camp. At first this millennial made me think my kind of hunting was doomed, but I’m starting to suspect it’s just another changing of the guard.