I’m an Immigrant, a Veteran, and Finally… a Hunter

From the Caribbean to Nebraska, it took 46 years to start hunting 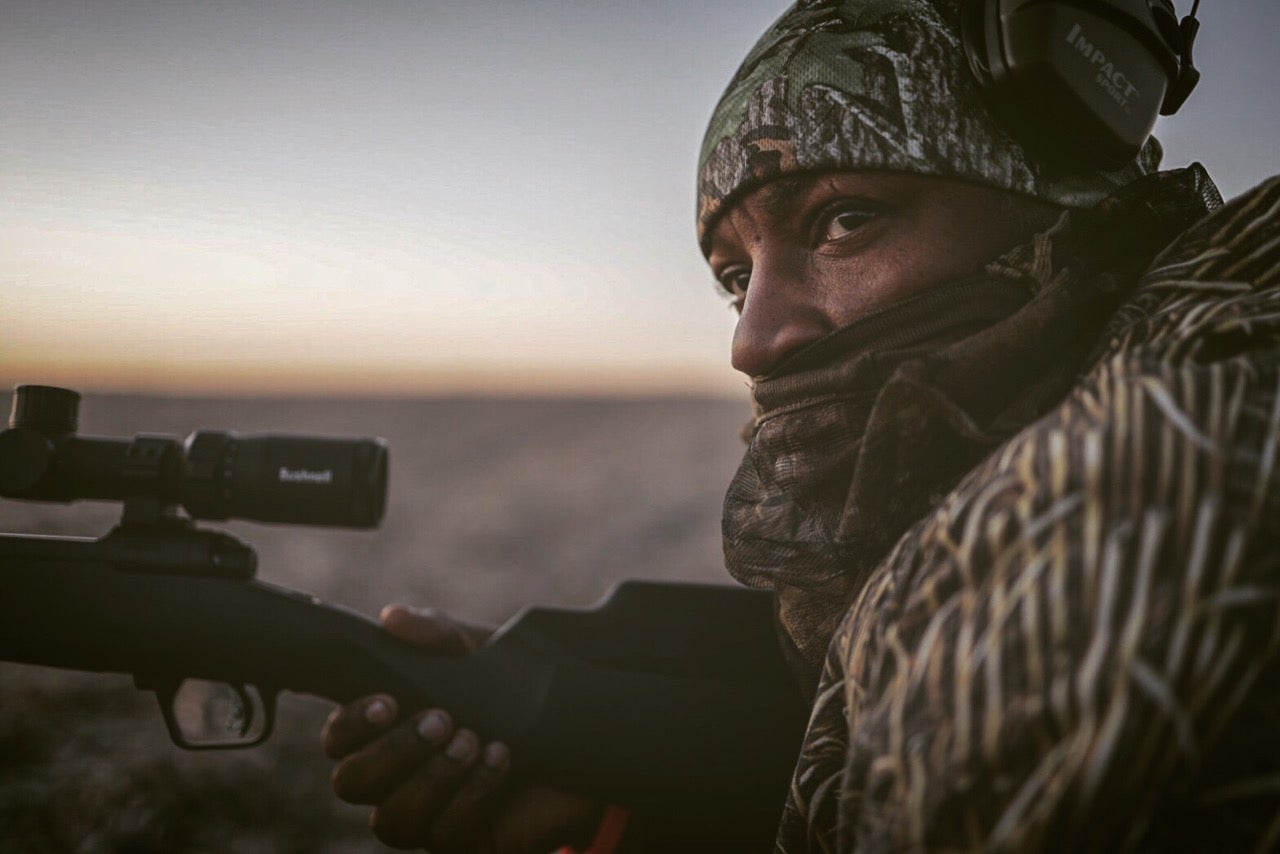 Keeping an eye out for coyotes on a first hunt last fall. Joe Dickie
SHARE

Editor’s note: If there’s one thing that’s certain after these last few weeks, it’s that Americans need to come together. To do that, we first must listen to those of us who have been ignored for too long. At Outdoor Life, that means black and other minority hunters and anglers who don’t often see themselves represented in the hunting and fishing community. We’re running a collection of essays to tell their stories and share their perspectives.

My neighbor Eric Dinger and I had been sitting in the blind for 15 minutes when I saw a young buck appear at 150 yards, walking right toward us.

“Ron, get ready,” Eric whispered. And then, a moment later, “Shoot it.”

I know a lot of hunters get excited when it’s time to shoot. Their heart rate goes up, and they start breathing hard. But last fall in Nebraska, I was steady. And when we found my first deer, 75 yards from where my bullet reached him, Eric was more excited than I was.

Don’t get me wrong—I was stoked. But I was also wondering, Is this it? Are we done?

In many ways, the hunt for my first deer was anticlimactic. It was also the culmination of something I’ve been working toward my entire life.

I was born on an island in the Caribbean, where there are few hunters and certainly no whitetail deer. We had to be resourceful in Saint Vincent and the Grenadines. This was a lesson I learned many times over as a child, but especially from my great-grandmother, who raised chickens on our land. She would pick one up by the neck, and by the time its feet left the ground, it was ready to go into a pot. I saw other animals butchered plenty, too. I would learn later that this process makes many people uncomfortable. At the time, it was just a way of life on the islands.

When I was six years old, that all changed. A volcano on the north end of St. Vincent, La Soufrière, erupted, forcing many families to evacuate the island. I moved to Brooklyn, New York, where both my parents joined the U.S. Army. They served on active duty for a total of 46 years, my mother as a logistics officer and my father as a weapons specialist. After three years in New York, we moved to Fort Campbell, Kentucky, then Frankfurt, Germany, and a dozen places after that. All told, I’ve lived in six countries and nine states.

When I joined my family in New York, I felt lost and out of place as a new immigrant. My new surroundings were unfamiliar and exciting all at the same time. So once I was older, I knew I wanted to help others. After graduating high school in Italy, I volunteered for AmeriCorps. In a year’s time, I did everything from teaching environmental education at the Tijuana estuary to painting houses in Phoenix. Throughout my travels, I saw many hunters.

A few years later, I joined the army, as my parents did before me. The immigrant walk is what drives my family in particular to our success. And as immigrants, military service was our way of saying thank you. I spent my first year in South Korea as a logistics specialist with the 2nd Infantry Division, and as a paratrooper with XVII Airborne Corps at Fort Bragg, North Carolina. I’d lived the military life as a kid, and now I was living the real thing, first-hand.

I was 24 years old during basic training, and never fired a gun before. I remember lying on the firing line beside an 18-year-old kid who’d hunted with his dad his whole life. He was an ace. There are lots of hunters in the military, and I’ve always known people who’ve hunted, but they weren’t necessarily in my circle. It’s always been one of those things: You see people out there, doing their thing, and think, That’s cool. You file it away as something you’d like to try. Then the years pass, and the opportunity never materializes.

My four years in the Army passed quickly. When I left, I studied business at the University of Nebraska, where I met my wife, Rachel. We stayed in Lincoln and raised a family together. My father-in-law has a range at his property, and Rachel has cousins who hunt deer, elk, and bear out West.

But even after all those encounters with hunters over the years, and even though I was now related to hunters, I didn’t get a chance to try hunting until my neighbor of 10 years asked me if I’d like to go.

First Time for Everything

I’ve always been a patient person, so it didn’t much matter that I was 46 and trying hunting for the first time. The way I look at life, you need to experience it. You need to try things. And you definitely can’t put your thumb on a timeline for education. If the desire to learn something new is there, and the opportunity arises, you can’t say no.

In the Army, everyone is required to pass a marksmanship qualification with the M16/A2. A lot of people see that weapon one time, and that’s it. They decide they don’t want to shoot anymore. Some people love it. That was me—I always loved it. When I went to Korea, I shot the M16, M14, M249, the M60, and the M203 grenade launcher. I was excited to shoot, and I always respected the weapons. But I was never afraid of them.

So, when Eric and I went to the range together, I knew the drill. My first hunt was that evening—an hour-long sit for coyotes that proved entirely uneventful. It was a relatively short hunt, but I was still disappointed that nothing happened. It was a one-time hunt as part of a video series with Savage Arms, but when it was over, I still had a hunting license and a free weekend. So I asked Eric if we could go deer hunting.

After another trip to the range, we drove out to my father-in-law’s land in Crete, Nebraska. As we were driving up, a big buck crossed the road 100 yards in front of us. He was walking right out of the field we were headed into.

Eric, his dad, and I walked the property line, then tried pushing a woodlot together without success. Next we tried a spot where Eric had set a stand the day before. We talked about basic safety, and what to look for while we hunted. He told me to keep my eyes peeled. Just as our conversation ended, I spotted the deer that would become my first deer.

At my first shot, the buck just stood there. I wasn’t sure what that meant, and I didn’t really have time to feel excited. So I shot again. When we recovered my buck, there was a range of emotions going through me. It was the first time I’d shot something, and I felt a little bad and accomplished all at the same time. It’s still hard to describe—maybe that’s just a natural feeling some new hunters have.

With my background in business, I’m always thinking about how to get the most bang out of my buck. If I can take the labor costs that I would incur by paying someone else, and try to do it myself, I will. That’s why, in many ways, hunting appeals to me. So does spending quality time doing things I enjoy.

That desire to do things myself is also why I didn’t want to take my deer to a processor. Butchering that deer was a family affair. In comparison to my hunt, which took all of 20 minutes, we spent six hours cutting up my deer and another, given to me by another hunter. My three kids had the opportunity to see a whole deer broken down into packages of meat that we froze for future dinners. It was a great teachable moment. We weren’t plucking chickens in St. Vincent, but it felt just as natural.

My children like to fish, and now they want to learn to hunt. So I bought a bow, which they take turns shooting in the backyard. I think they’re even more excited about my deer hunt than I am. I know that I got lucky last year, and that I still have a lot to learn. After just a few hunts, I’m not ready to go out hunting on my own just yet. But I sure know a lot more this fall than last.