How Two Senators, a Swiss Philanthropist, and Secretary Zinke Could Unlock America’s Only Inaccessible Wilderness 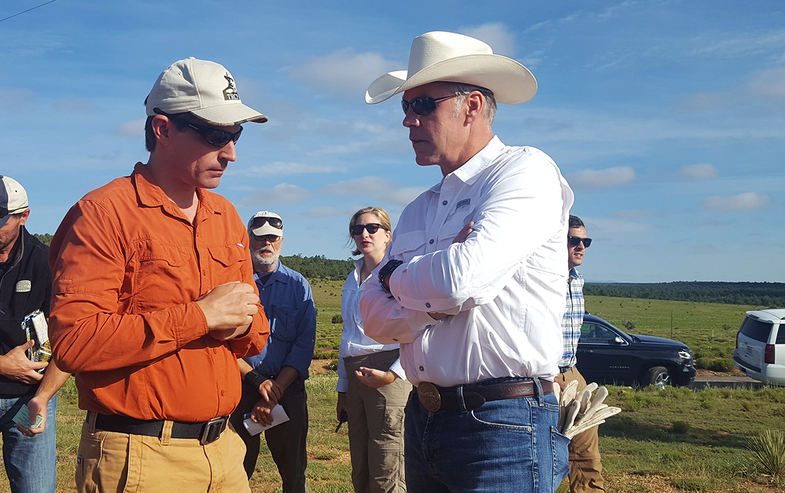 There’s a 16,000-acre wilderness in Northern New Mexico that’s full of turkeys, mule deer, and elk (it’s even rumored to hold trophy aoudad). What’s more, this rugged wilderness of deep canyons, cottonwood river bottoms, and mesas has seen hardly any hunting pressure for at least a decade. The nearest city (Las Vegas, N.M., population 13,285) is a good 50 miles away.

But there’s a catch to this backcountry hunter’s paradise, and it’s a big one.

This wilderness could be unlocked, possibly in time for this fall’s hunting season, with a signature from the Secretary of the Interior, Ryan Zinke. One of the ranches bordering the Sabinoso Wilderness was sold to the Wilderness Land Trust for $3 million, and the Trust intends to donate that land to the Bureau of Land Management in order to open access to the public.

A quick aside here: The Wilderness Land Trust got the funds to purchase the ranch through the Wyss Foundation, a private charity founded by Swiss billionaire Hansjorg Wyss. Hansjorg, who now lives in Wyoming, made his fortune through the medical device industry. While working in the U.S., he fell in love with the American ideals of public land.

Back to Zinke… The Secretary has not yet accepted the donation from the Wilderness Land Trust. But over the weekend, he did spend a day touring the Sabinoso on horseback with New Mexico’s Democratic senators, Tom Udall and Martin Heinrich, who have been working for 10 years to open the property to the public. Heinrich invited Zinke to visit the area during this exchange earlier in the summer:

The Sabinoso was first designated as wilderness in 2009, and Udall, Heinrich, and local sportsman’s groups hoped that increasing its profile would create leverage for access opportunities. Since then, they’ve been waiting for one of the bordering ranches to sell, which finally happened with the 4,176-acre Rimrock Rose ranch in February 2016.

“This is an enormous opportunity that might only come around once in a generation,” Heinrich says of the land donation. “[The Sabinoso] is a pretty spectacular property. Even when public access is granted, it won’t be easy to get into. It will attract a certain type of hunter.”

Heinrich, who describes himself as an avid hunter, says he’s “cautiously optimistic” about Zinke accepting the donation in time for fall, but no timeline has been given by the Secretary.

“The community really supports this,” says Jason Amaro, Backcountry Hunters & Anglers southwest chapter coordinator. “This should be a quick and easy win for [Zinke]. I can’t see why he wouldn’t do it.”

And Zinke could use an easy win. He’s taken heat over his review of 27 national monuments (which is to be completed this month) and he was on the defensive last week after he made phone calls to Alaska Republican senators Lisa Murkowski and Dan Sullivan when they voted against their party’s health care bill. The senators claimed Zinke threatened to hamper projects on federal lands in their state. Zinke says those claims are “laughable.”

Amaro is concerned the Sabinoso could get caught up in that same type of political gamesmanship. And if an everybody-wins deal like the Sabinoso can’t be completed, what hopes do sportsmen have for completing other, more contentious projects around the country?

“I don’t want sportsmen to get tied up in the politics of it,” Amaro says. “We had high hopes for Zinke, so this would be a good thing for all of us.”

It seems that the only hang up is the designation of the Rimrock Ranch. The Wilderness Land Trust wants their 4,176 acres to be added to the existing wilderness, which would give it a higher level of protection (no off-road vehicles, for example) than if it was designated as multiple-use BLM land. Before the trip to Sabinoso, Zinke was unsure that the ranch fit the wilderness designation criteria. Now, all parties involved are hoping Zinke is willing to compromise and accept the donated land as wilderness.

“The Sabinoso could be a poster child for public-land access,” Heinrich says. “I’m hopeful that the Secretary will do the right thing.”

Until then, New Mexico sportsmen will continue waiting.