A first look at Big Green’s new cartridge that’s challenging the .350 Legend and other straight-wall rounds for the hearts and minds of Midwestern whitetail hunters 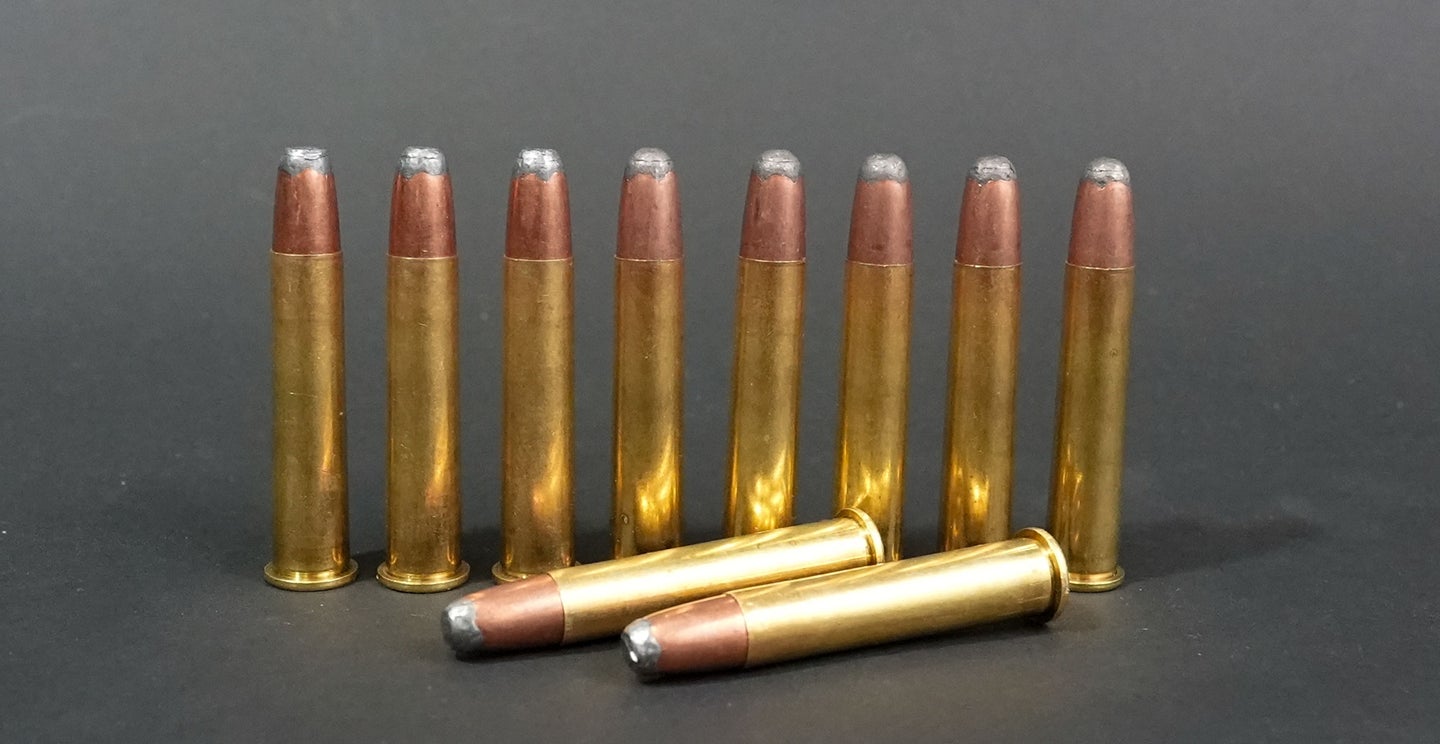 The straight-wall .360 Remington Buckhammer will be first loaded with 200-grain (pictured) and 180-grain Core-Lokt soft points. John B. Snow
SHARE

The success of the .350 Legend showed how eager hunters were to swap their slug-launching smoothbores for rifles in these areas, and Remington, with the introduction of the .360 BHMR, wants a piece of the action.

I had a chance to shoot and hunt with pre-production samples of the ammunition and a pre-production lever gun made by Henry Repeating Arms last fall, and think it is going to be an attractive option for whitetail hunters who fancy lever-actions. I suspect the .360 Buckhammer will also find a niche with single-shot rifles, some catered to budget-minded hunters and others that are more high-end, along the lines of a Ruger No. 1.

Though the Buckhammer is being officially unveiled at this year’s SHOT Show in Las Vegas, we’re not going to see rifles and ammunition on the shelves until later this summer. Remington’s partner with the introduction is Henry Repeating Arms. As part of the launch effort Henry is chambering the .360 Buckhammer in four different SKUs, three lever-actions and one single-shot.

The lever guns are identical except for the stock style and metal finishes. There’s the “Lever Steel,” which I’ve been using, that has a traditional walnut stock and glossy blued finish. The “Lever X” model has a synthetic stock that incorporates a small section of Picatinny rail on the fore-end and has matte blued metal work. And there’s a higher-grade version with a polished hardened brass receiver and upgraded wood.

The single shot will have blued steel and a walnut stock and comes drilled and tapped to accept Weaver 82 scope bases. Expect to see Henry officially announce these rifles at the NRA Annual Meeting in mid-April.

While the Buckhammer is new, these two soft-points are extremely well known—and loved—by deer hunters. Marketed for years as “The Deadliest Mushroom in the Woods,” these .35 Core-Lokts were loaded in the .35 Remington and .35 Whelen by Big Green.

How the .360 Buckhammer is Different

Though the .350 Legend got a jump on the market, Remington is counting on two factors to give them traction with this introduction.

The biggest promise Remington is making with the .360 Buckhammer is that it fills a performance gap between other straight-wall cartridges. It is faster than .350 Legend, .450 Bushmaster and .30/30, shoots nearly as flat or flatter to 200 yards (depending on the bullet), and has more retained energy downrange.

Though it recoils a bit more than the .350 Legend and .30/30, it is still a very mild shooting cartridge, and recoils noticeably less than the .450 Bushmaster.

The Buckhammer gives hunters who love lever-guns the chance to carry them into their blinds and stands in the straight-wall states. Because it is a rimmed cartridge, it is ideally suited to run in lever-actions. The nostalgic appeal of carrying a lever gun in the whitetail woods is sure to capture the hearts (and open the wallets) of a sizeable number of Midwestern deer hunters.

Remington has also taken pains to the make the .360 Buckhammer relatively affordable. The list price on the ammo for a box of 20 is $36.99, which counts as budget-friendly these days.

I’m an old .35 Remington guy—I carried a Marlin 336C chambered in it for years—and developed a deep appreciation for the mild-mannered round and the ability of those 200-grain softpoints to knock the snot out of any whitetail within range.

I’ve had a rifle from Henry for a few months, and though my ammunition supply was limited to four boxes, I put all but a few of those rounds downrange and took the rifle on a deer hunt in Ohio in early December.

I spent most of the hunt in treestands, bracing myself against the chill December winds and staying alert for one of the bruiser whitetails the region is known for. The light and handy rifle, topped with a basic variable-power scope was ideal for the situation.

At just 39 inches long, it is easy to maneuver and, of course, the Henry embodies all the wonderful pointing characteristics lever-gun carbines are known for. I kept the rifle loaded and across my lap, and should a shooter buck step out all I needed to do was thumb the hammer back, which I could do with gloved hands.

Henry started offering side gates on their rifles in 2020, and that’s a useful and classic feature hunters had been asking for. But the ability to load the rifle through the tubular magazine, which Henry retained on its rifles, is really convenient. You can drop the rounds into the magazine quickly and without needing to fight the gate, which can be a pain, especially when wearing gloves. It makes unloading much simpler and safer since you don’t have to cycle the gun to shuck out all the shells. The only time you need to work the lever while unloading is if you have one in the chamber.

Sadly, I never got a crack at a big buck on the hunt. Though we had plenty of trailcam pics of impressive deer, they were almost exclusively moving at night, which is not surprising because that’s how big bucks get big. Plus, they were still recovering from the rut, which concluded just a couple weeks prior, making them even less likely to wander about.

However, my hunting companions who were also using the .360 Buckhammer did take some deer with it—a couple nice bucks and a bunch of does. The terminal performance was exactly as I would have anticipated: passthrough shots that showed evidence of good expansion based on the size of the exit holes and analysis of the tissue damage in the body cavity.

My colleague, Editor-in-Chief Alex Robinson, hunted with the .360 Buckhammer at his family’s deer camp in Wisconsin last fall as well and shot a cruising buck at close quarters in heavy cover. With the fast-running lever gun he shot three times, hitting the buck twice (both pass throughs) and watched it crash down less than 100 yards away.

As I mentioned, my rifle and ammo were both pre-production samples. As part of the development process of the .360 Buckhammer, my ammunition was intentionally handloaded to lower pressures. So my muzzle velocities, which averaged 2148 fps with the 200-grain Core-Lokts from my rifle’s 20-inch barrel, were slower than what the actual factory ammo will deliver (2217 fps according to Remington).

Remington was also still finalizing the chamber drawings and specs for the round, specifically in terms of twist rate and throat dimensions. My rifle came with a 1:14 twist and had a steep 12-degree leade machined in the throat. The final specs for the .360 Buckhammer call for a 1:12 twist and a 1.5-degree leade in the throat, both of which should improve the round’s accuracy.

I shot five 5-shot groups with my rifle at the range and the groups averaged 2.442 inches. That’s okay for shooting within 150 yards on deer, but there’s certainly room for improvement. Based on my experience with similar cartridges in lever guns, I would expect to see the average of multiple 5-shot groups in the 1.5- to 1.75-inch range. With that accuracy, I’d be comfortable to 200 yards on a whitetail.

Once Remington gets me finalized ammunition and Henry delivers another rifle that reflects the final specs for the .360 Remington, I’ll do another round of shooting and update the results.

I know that RCBS is already working on reloading dies for the round for those who want to reload. I don’t have any data yet, but I think that using Accurate 1680 and powders with similar burn rates will be a good place to start.

The SAAMI spec chamber pressure for the .360 Buckhammer is 50,000 psi, which is spot-on for a modern lever-action round. Like other straight-walls, the interior of the case has a slight taper to keep the bullet from dropping to the bottom when reloading.

Remington ammunition was acquired by Vista Outdoor a year ago, the parent company of Federal ammunition. So at some point in the not-distant future we’re going to see Federal producing .360 Buckhammer loads.

The initial bullets offered are going to be a 180-grain PowerShok and a 200-grain HammerDown. Remington will also add a 150-grain PSP to the .360 Buckhammer line as well.

In terms of rifles, I expect to see some other companies chamber the .360 Buckhammer soon.

Don’t be surprised if Ruger is one of the first to jump on the round. The .360 would make a lovely addition to the No. 1 lineup and would be a natural fit in a Marlin lever action, which is owned by Ruger as well.

Another good fit would be CVA in one of their economical single-shots.

Final Thoughts on the Buckhammer

I’ll be the first to admit that I didn’t anticipate the runaway success of the .350 Legend. I figured it would be a niche round that sort of puttered along. I couldn’t have been more wrong. The versatility of the .350 Legend, which is equally at home in bolt-action and AR-15 type rifles, is part of its appeal. But it is also clear that the round’s mild, yet effective, ballistics has also been a huge factor.

The .360 Buckhammer has similar mojo. It is a little more potent than the .350 Legend, but not overpowering. It also meshes seamlessly with two platforms long favored by heartland deer hunters—lever actions and single-shots. Finally, it uses bullets with decades-long track records of success on whitetail and that are literally beloved by their fans.

Point being, I’m not going to underestimate the .360 Buckhammer’s prospects. One thing that’s clear is that the .350 Legend now has to contend with a worthy adversary.