More slug-gun only states are legalizing straight-wall rifle cartridges for deer hunting. So, does that mean rifled and sabot slugs are doomed in the whitetail woods? 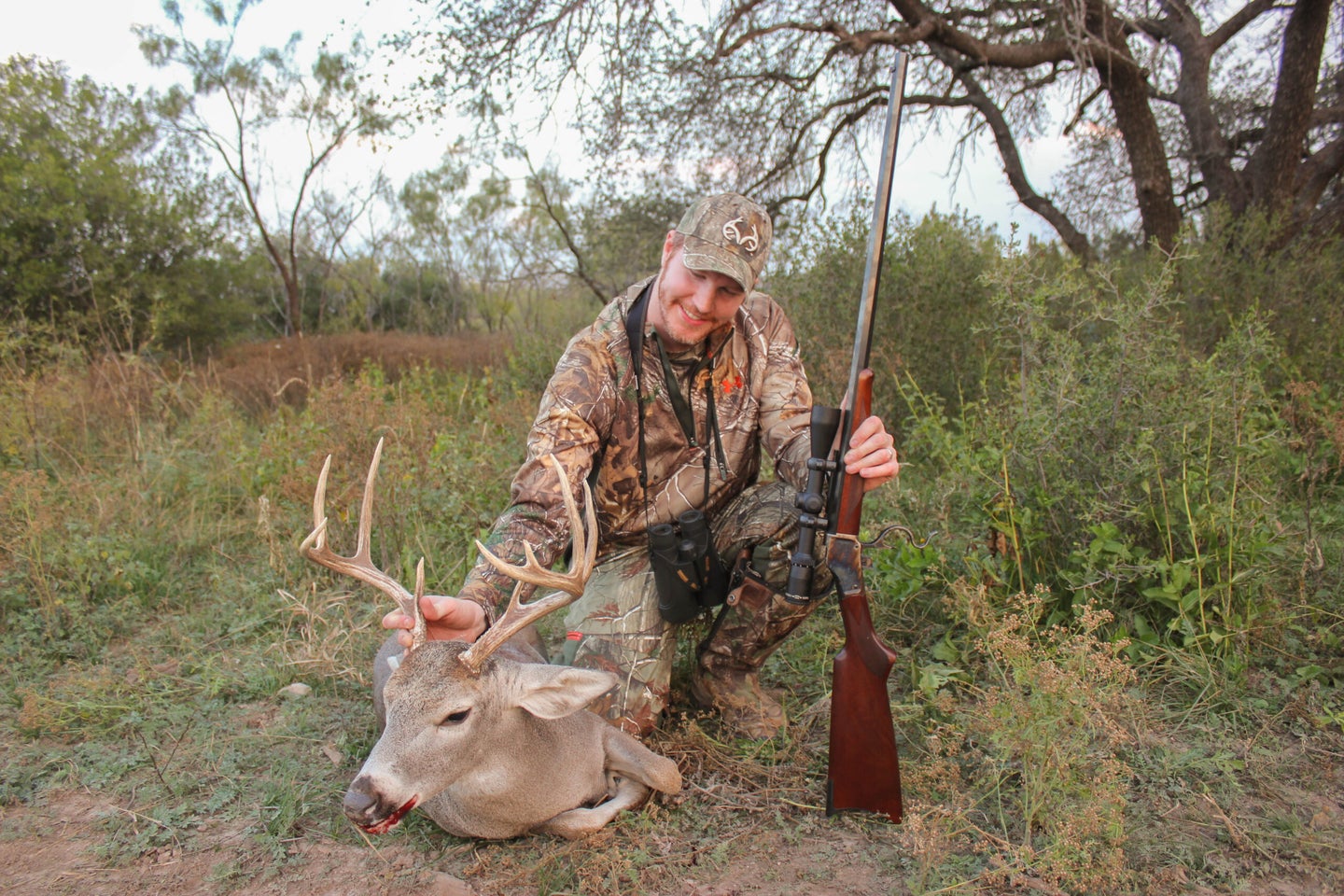 I grew up in the heyday of slug gun hunting. Whitetail populations began to explode in the 1980s and 1990s, especially in suburban areas, like in my home state of Ohio. Since centerfire rifles were deemed to be dangerous for whitetail hunting in populated areas, shotgun slugs were the best option.

The sudden demand for slugs led to some improvements in their design. The Foster-style lead slug—never particularly accurate at distance—gave way to sabot slugs that could be fired through rifled shotgun barrels and kill deer out to 200 yards. Adjustable sights replaced single bead front sights, and scopes and red dots replaced adjustable sights for increased accuracy at longer ranges.

The .350 Legend is anemic compared to some bottlenecked centerfires developed around the same time, such as the 6.5 PRC and .300 PRC. But it produced enough energy to kill whitetails consistently out to 250 yards and did so without generating heavy recoil. The recoil energy produced by a 7-pound rifle chambered in .350 Legend (150 grains) is a manageable 10½ pounds, similar to that of a .30/30 of the same bullet weight. Most importantly, its 1.71-inch case met the requirement for straight-wall hunting in states like Michigan and Ohio. It was also affordable for hunters. When the .350 Legend debuted, it cost $1 per round. That price has almost doubled since, but you can still buy a box of 20 for less than $40.

Also, affordable bolt guns and single shots, like Winchester’s XPR, Ruger’s American Ranch, and the CVA Scout, were available in .350 Legend, and the cartridge could also be run in AR rifles. I’ve shot several .350 Legend rifles from different manufacturers and with different ammunition. All could shoot sub-2-inch groups at 100 yards. Some shot sub-1½ inches, and a few flirted with 1-inch groups.

Today, you can find straight-wall ammunition in a variety of offerings, and they can also be shot from several platforms, including lever-actions, handguns, semi-automatic rifles, and bolt-actions. Here is a list of the most common loads used by deer hunters:

Straight walls aren’t going to win any PRS matches, but you don’t need them to. You just need to be able to hit a whitetail’s vitals at 200 yards with one. For instance, during Outdoor Life’s 2019 Gun Test, the Winchester XPR chambered in .350 Legend averaged 1.89-inch, five-shot groups at 100 yards. This is not stellar accuracy for most hunting rifles, but it’s as good or better performance than you’d get out of an average slug gun. The chart below shows how the .350 Legend and .45/70 stack up against rifled slugs and sabots in terms of accuracy and recoil energy (I used Bison’s ballistic calculator to determine recoil energy).

There are some interesting takeaways from the above chart. First, the .350 Legend is by far the lightest projectile on the list at 150 grains, and it has a higher muzzle velocity than any of the others. The two 12-gauge slugs both produce 700 ft.-lb. more energy at the muzzle than the .350 Legend and 240 to nearly 400 ft./lb. more than the .45/70.

Do Slug Guns Have a Future in Deer Hunting?

It’s clear some slugs have more recoil and are ballistically inferior to straight walls, especially at distance. So other than versatility, what does shooting a slug gun really offer? That’s a good question for ammo makers, which is why I asked Winchester and Hornady where they see the future of slugs headed.

“We certainly aren’t walking away from slugs,” says Nathan Robinson, marketing manager for Winchester. Robinson says that demand for slugs is softening, but that it isn’t going away. In fact, he says, Winchester is in the process of developing new, more advanced shotgun slugs for hunters this fall.

“From a technology perspective, everyone wins from going to straight wall,” Robinson said. “However, you can keep using your slug gun and we’ll keep making the ammo that shooters and hunters want.”

Hornady’s marketing and communications manager Seth Swerczek isn’t as optimistic about the future of slug guns. But Hornady plans to continue offering slugs as demand remains.

“My answer is speculative, but I would say the slug market is indeed going to get smaller,” Swerczek says “Although, I don’t think it will happen at a fast rate. Yes, the straight-wall cartridges likely increase the effective range slightly and provide generally better accuracy at all ranges, but there are still a lot of slug guns out there and not everyone is going to jump on the straight-wall wagon all at once.”

Even though straight walls are gaining traction amongst deer hunters, there is still plenty of value in owning a good shotgun. If there is a semi-auto or pump in your gun closet, there is one major advantage over a rifle: You can carry the same gun for spring turkeys, squirrels, rabbits, ducks, and geese as you do for deer season. The only extras you will need for whitetails are a rifled barrel—if you shoot sabots—and an optic for better accuracy. As someone who hunts across the country, I can also tell you It’s nice to travel with just one gun. If you go bear hunting in Maine or come to Ohio and deer hunt and want to shoot a few grouse or ducks during your trip too, you can do it all with just a shotgun.

Read Next: The Best Budget Hunting Rifles, Put to the Test

The Most Popular Straight-Wall Rifles and Slug Guns

Since deer hunters can legally shoot whitetails with straight-wall cartridges in most states, and slug guns are still being used by hunters in former shotgun-only states, here is a list of the most popular rifles and slug guns for whitetail hunters. Just remember that every state has its own set of restrictions on straight-wall cartridge size and the guns you are allowed to hunt with. So, check the regulations before you go.