Your First Elk Hunt: What Rifle Should You Bring?

Should you take a rifle you already have or get a new one for the hunt of a lifetime? 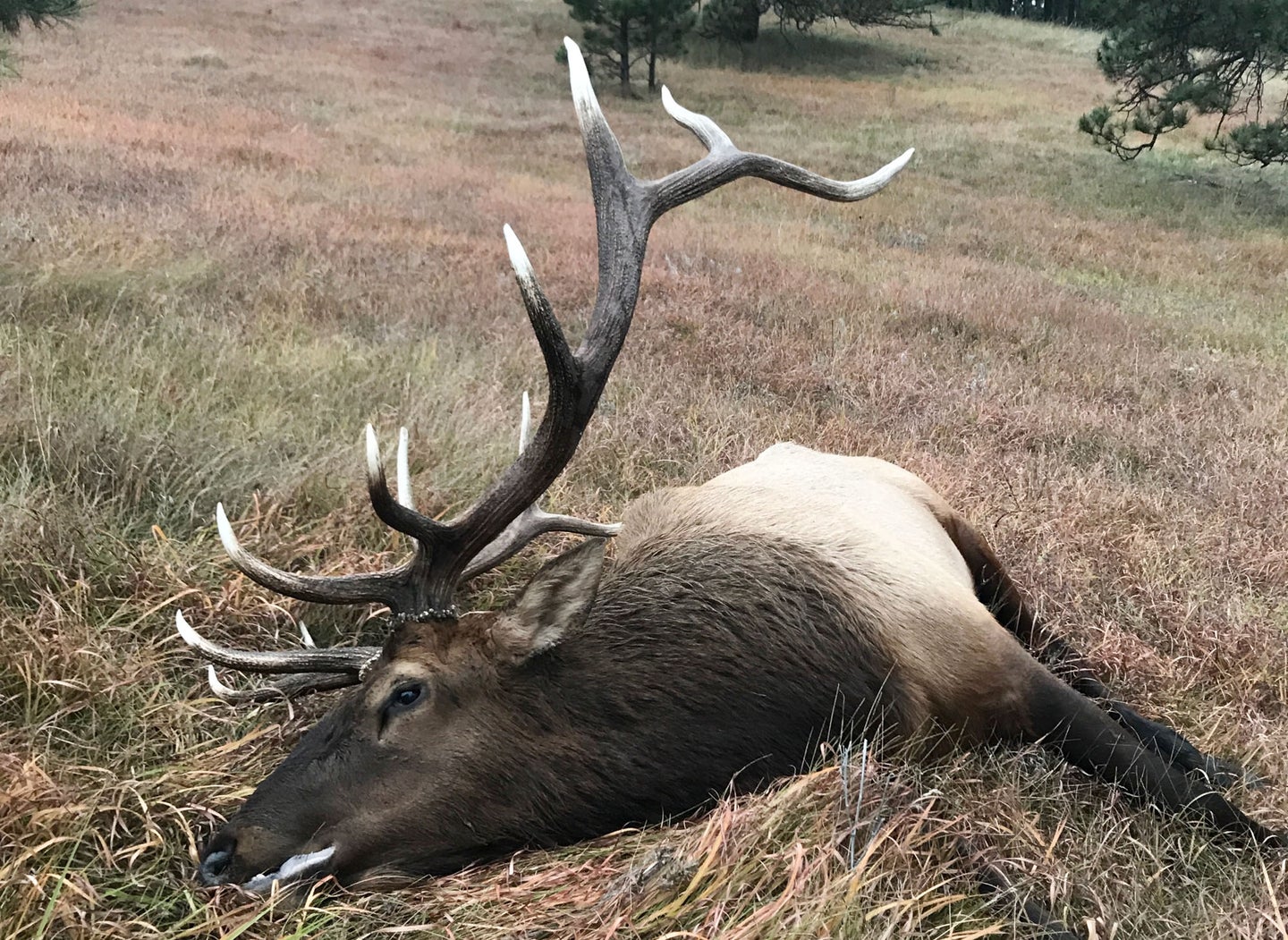 When taking on elk, selecting the right bullet is more important that jumping up to a magnum cartridge. John B. Snow
SHARE

I never require any encouragement to buy a new rifle for an upcoming hunt. But then again, I’m what is technically known as “fiscally irresponsible.” One question I frequently get from hunters going on their first elk hunt is what rifle to bring. As happy as I am to part with my own money, I’m even happier to spend other’s hard-earned lucre. That said, my advice to these folks is often not to buy a rifle specifically for elk and to instead take one they already own and are familiar with.

Experts lurk in every corner of the internet, and elk rifle experts are nearly as common as experts regarding handguns for protection against bears. One common observation from these elk-aficionados is that elk are remarkably tough animals that need to be pursued with cartridges bigger and more powerful than what you’d use on a whitetail or mule deer.

The .300 PRC takes a slightly different approach with a design that is optimized for heavy-for-caliber bullets with higher BCs and lower MVs. Hornady’s 212-grain ELD-X has a MV of 2860 fps and ME of 3850 ft.-lb.

All these .30- and .338-caliber thumpers do outstanding work on elk, and the bigger .33s even pack enough punch to take dangerous African game. But do you want a rifle chambered in one for elk, particularly in a rifle where weight is going to be a concern?

The argument for these cartridges is that because elk are so much larger and tougher than deer you need a larger bullet to break through bone better, to handle less-than-ideal shot angles, and to take advantage of the better killing ability of the larger bullet diameters.

While these arguments have some merit, I think they are overstated by their advocates, particularly in light of today’s better hunting bullets. This logic is the product of a bygone era where bullet performance was spotty and to cope with that deficit a bigger cartridge and bullet justified the tradeoffs.

For those too young to remember, bullet failure used to be a legitimate concern. There were plenty of basic cup-and-core designs that didn’t hold together very well and whose terminal ballistics were inconsistent. Some of these bullets would fragment violently on impact with an animal’s shoulder, especially at close ranges when the projectile was still carrying a lot of velocity, leaving a gory surface wound that wasn’t instantly fatal. And some bullets would fail to expand at all, penciling through the animal without damaging enough tissue to kill it outright.

In that context, bumping up to a larger cartridge and bullet in your elk rifle was a reasonable remedy.

The biggest downside to these rifles is the amount of recoil they generate and the difficulty people have shooting them. It’s hard to overstate how significant this can be. I’ve watched and coached countless hunters try to sight-in and shoot their magnum-caliber rifles and most struggle mightily, even those who consider themselves experienced hunters and marksmen—to say nothing of the newbie on their first elk hunt.

These shooters often close their eyes at the shot, flinch with anticipation of the trigger break, hold their rifle in a death-grip, or fail to firmly place the recoil pad in their shoulder—none of which are conducive to good shooting.

A muzzle brake can help mitigate some of this, but the excess muzzle blast can contribute to these issues as well. It certainly isn’t a cure-all.

I’m not going to get into the argument of how low you can go with cartridge selection for elk. There are plenty of places you can read about the 6.5 Creed for elk elsewhere. But you shouldn’t feel hampered in the least by bringing your favorite deer rifle on an elk hunt.

In the .30/06 I’ve killed elk and moose with various 180-grain bullets and I’m a big fan of the Accubond in this weight. At 2750 fps, the 180 AB has 3022 ft.-lb. of ME and even stodgy old-timers would have a hard time arguing that it isn’t enough for a mature 6×6 bull. Other bullets to consider are Federal’s 180-grain Fusion and Remington’s new Core-Lokt tipped.

The .270 Win. has proven itself as a consummate Western big game round over the decades and is more effective than ever with some of today’s premium hunting projectiles. The 136-grain Federal Terminal Ascent is one of these best-in-class bullets and at 3000 fps generates 2718 ft.-lb. of muzzle energy. If the thought of a 136-grain bullet seems a little light, you can step it up with a 150-grain Nosler ABLR at 2850 fps and 2705 ft.-lb. ME. Both bullets will penetrate deeply and expand reliably even on longer shots. And they shoot flat and have very manageable recoil.

The final example I’ll highlight is the 6.5 PRC, which is optimized for .264-in. diameter heavy-for-caliber bullets and during the brief time since its introduction in late 2018 has racked up an impressive track record on Western big game including elk.

The ammo offerings in 6.5 PRC have been rapidly expanding. Hornady’s 143-grain ELD-X at 2960 fps (2783 ft.-lb. ME) was the first hunting load, and I’ve tagged several elk with this bullet. But other manufacturers have jumped into the mix. Federal has their 140-grain Fusion (2925 fps/2659 ft.-lb. ME) and 130-grain Terminal Ascent (3000 fps/2598 ft.-lb. ME). I haven’t killed an elk with the 130-grain TE, but have used it on aoudad, which are reasonably large, and a couple deer with devastating effect and wouldn’t hesitate to shoot a bull with it.

Why Smaller Can Be Better for an Elk Rifle

The advantages of these small cartridges are that you probably already own one, and, secondly, will be able to shoot it better than the big .30s and .33s.

By way of comparison look at the chart above showing the relatively recoil that each cartridge generates in an 8.5-pound rifle. When you consider that a .30/06 is at the upper end of what most hunters can tolerate and shoot well with 25.1 ft.-lb. of recoil, the issues with the magnum rounds becomes apparent. It isn’t that those big boomers are impossible to master. They are with practice. But they require work and effort to do so. And the hunter who brags about shooting the same box of ammo for the past three seasons while shouldering a magnum hasn’t put in that work and doesn’t shoot nearly as well as he thinks he does.

Speaking of practice, with all that money you’ll be saving by not buying a new rifle, you can invest in a couple hundred rounds of ammo and up your skills. This is where going lighter will really pay dividends.

Not only will you not beat yourself to pieces trying to shoot a heavy gun, but you will arrive in elk camp with an advantage that none of the magnum shooters will have. Namely, you will have mastered your rifle and be able to put a shot on target when it counts most. As long as your bullet is up to snuff, that elk will be yours.