Can You Mentor a New Hunter When You’re Still Learning to Hunt Yourself? 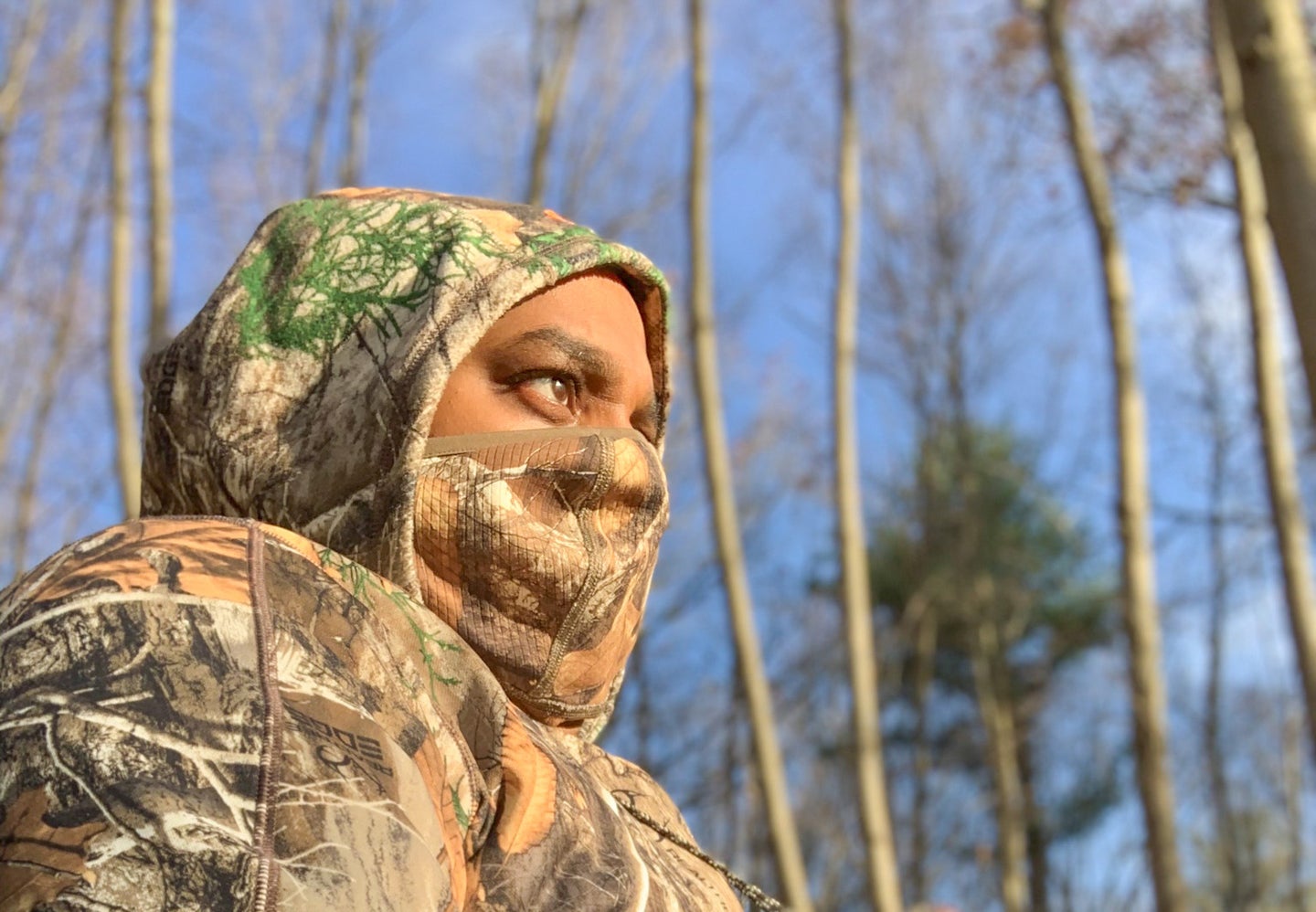 The author wrestled with mentoring a new hunter or focusing on his own season. Cliff Cadet
SHARE

I met my mentee the same way I met my hunting mentor: via Instagram. Shaq reached out to me at the start of last year’s deer season, with a proposal. He had all his gear and all his tags. He just wanted to know if I’d be willing to take him hunting.

At first, I was honored. But then I struggled to decide. I’ve yet to kill my own deer. Now I’m supposed to help a new hunter kill their first? I did what I think anyone else would do. I passed him on to someone else.

I originally started my Instagram account because I wanted to pick the brains of those who were more knowledgeable than myself. I started shooting a compound bow in 2017; in 2019, I figured social media would be an awesome tool for reaching out to experienced archers. That’s when I came across posts from the 2019 ATA show, and hunting became an immediate goal.

As I transitioned from archery questions to questions about bowhunting, however, I found something lacking. There weren’t many hunters of color for me to engage with, and still fewer who lived in an urban area like I do. The lack of representation was disappointing, but it did not deter me from finding the information I was seeking. I picked the brains of any hunters who were willing to answer my questions.

With the hunting community’s recruitment initiative in full swing, there was no shortage of hunters sharing information and offering to take me hunting. You’d think I’d hit the jackpot.

But those offers required long road trips to attend a hunt or joining pro-staff programs. I could do neither. My family wasn’t ready for me to be away from home, and I wasn’t necessarily looking to promote products. I turned to podcasts instead. Podcasts, I found, primarily helped me to understand hunting terminology. Hearing hunting jargon in context helped tremendously as I sifted through all the information I was collecting.

Then I started watching YouTube and Netflix. I immersed myself in John Dudley’s tips, The Hunting Public’s extensive library, and Steve Rinella’s series. But I was missing the in-person mentoring I believe every new hunter should have access to, that I knew I desperately needed.

I met my mentor, Anthony, by luck. One of my Instagram posts was reposted by someone in Connecticut, and he happened to come across it. He reached out and we hit it off. He showed me how to scout for turkey and deer. And for both those seasons, he took me hunting. It was so helpful to be able to apply what I’d already learned, and to soak up even more. What has strengthened mine and Anthony’s mentor/mentee relationship is that it’s not only limited to being out in the field together. It’s also that he allows me to reach out at any time, with any question I may have, and he’s more than willing to coach me. In my eyes, he’s the perfect mentor.

I feel a duty and desire to pay it forward. There’s something to be said for newer hunters becoming mentors, given that we’re not decades removed from a time when we ourselves learned to hunt. It’s easy to remember the questions, concerns, and unspoken thoughts of a new adult hunter because I was in their shoes just a few seasons ago.

In particular, though, I want to be a resource to other potential hunters of color, and especially those from urban areas. At the start of my journey, it was normal for people to say, “It’s easy—just get out there and do it,” and “All you’ve gotta do is put in the work,” and “The woods don’t care about your race.”

But as a hunter of color from Brooklyn who has a family and a demanding job (that’s busiest during deer hunting season), there are unique issues that I have to acknowledge, and address, before even stepping foot in the woods. I put in plenty of work. But I’m competing against hunters who live just minutes away from the pieces of public land we hunt. They get their scouting done easily before and after work. I often have to take the bus. Also, I can’t “just get out there.” I have a family who isn’t into hunting, and I have responsibilities to them. So I don’t just up and leave when I feel like it. And I know the woods don’t care about my race. I absolutely love that about hunting. But the reality is, other folks in the woods and along the way might and do. I may not have killed a deer yet, but you better believe I can give would-be hunters like me better advice than those pat phrases.

Paying It Forward to New Hunters

As I had hoped, my Instagram page quickly became a way for me to encourage other folks from big cities to take to the woods in search of game big and small. In some ways, it’s worked so well that I’m overwhelmed. Many of my followers have asked me to take them out hunting. I’ve only hunted two spring turkey seasons and two fall deer seasons. The four seasons combined have yielded only one kill (a turkey). So who am I to take anyone hunting, when I’m barely a hunter myself?

That was my reasoning when Shaq asked me to take him deer hunting, and I handed him off to another hunter.

I know, I know. I’m a horrible person. But you see, at around the same time I met Shaq, I met Louis. He’s an avid waterfowl hunter with more deer hunting experience than myself. He seemed like a knowledgeable mentor, and he was excited to take Shaq hunting.

I thought I did the right thing. Unfortunately, Louis was only able to take Shaq duck hunting, and Shaq lost interest. So late in the season, I took Shaq deer hunting.

I’ll be honest: It was a bit of a selfish outing. I took him to a piece of public land that I didn’t have much experience on. I really didn’t want to take him to the property I had been focusing on for myself. At the end of the day, the goal was to get Shaq out into some deer woods and get him some experience using his climber.

Mission accomplished. But still—I felt like a crappy mentor.

A few months before this turkey season, Shaq again reached out. He wanted to hunt turkeys. Though I’d been successful on my first turkey hunt the year before, I had been with my mentor. I was still uncomfortable taking someone hunting myself, but I decided to try it again.

I made it a point to recall what I knew I needed when I first started on my hunting journey. I managed Shaq’s expectations the same way my own mentor had. I started by acknowledging my inexperience, and the difficulties of bowhunting turkeys. I stressed the importance of practicing so that when the shot presented itself, Shaq would be ready to take it. I made sure he had the proper gear and the correct tags. Anything I could think of, I made sure we discussed it.

Opening day arrived and we met an hour before sunrise. At the entrance to the property, I reviewed our goals for the day’s hunt. We hadn’t roosted any turkeys, so our goal was to find an open area with some cover not too far away. After walking for about 30 minutes, we found the perfect spot. It didn’t provide much cover—just a lot of thick brush at our backs to break up our silhouettes. We set our decoys, then took a seat. It wasn’t very long before we were hearing gobbles, and my calling skills were put to the test.

I called. The turkeys gobbled. There were two roosted near us: One to our left and the other to our right. The conversation went on for almost an hour before the gobbles slowly began to fade. I can only assume both birds flew down from their trees and away from us. We gave chase but saw no turkeys that day.

I was disappointed. Shaq was ecstatic. Not only did he enjoy being out in the woods, but he had heard his first turkey gobbles and learned loads more than if I hadn’t taken him. This was a huge success, in his eyes. His joy became my own.

In hindsight, I don’t think I was being selfish the first time I took Shaq out. I was struggling with achieving my own success and teaching someone at the same time. We’d never been scouting together. I really didn’t know what Shaq knew. So we set some feasible goals that seemed ideal, and we were successful.

In our second experience together, I invested more time in coaching Shaq ahead of the hunt. I made it a point to share as much information as possible. We spent a good amount of time on the phone with Shaq reviewing turkey hunting tactics, turkey calling, and much more. But most importantly, I had managed his expectations. On opening day, I worried that I’d make his first turkey hunt a poor one. I can proudly say that wasn’t so.

If you’re conflicted about taking a new hunter out when you’re a new hunter yourself, remember the following guidelines: