Yes, I’m Already Teaching My 2-Year-Old How to Shoot a Bow 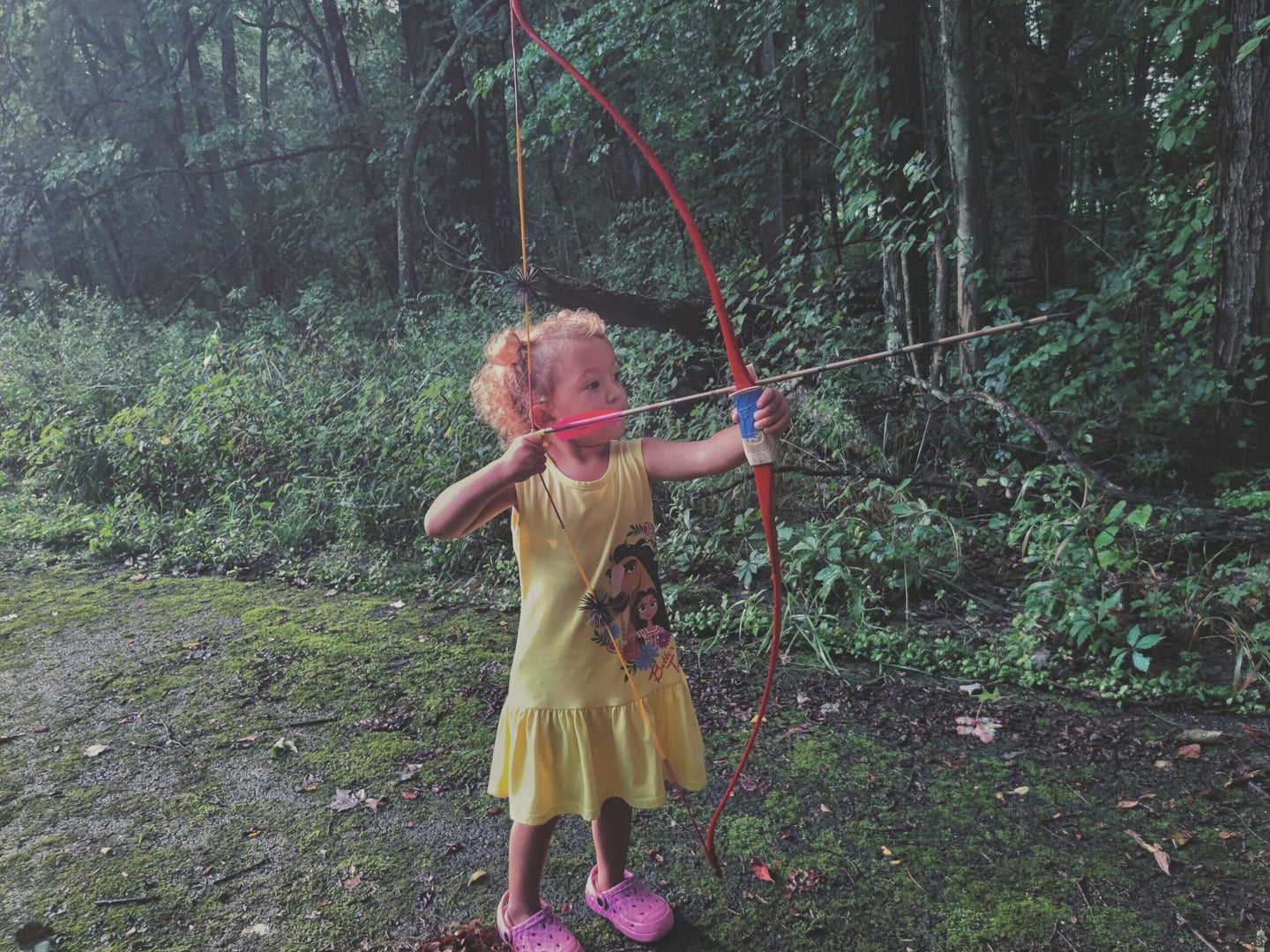 It's never too early to start fostering a love of the outdoors in your kids. Beka Garris
SHARE

My daughter’s curls bounced up and down with each step she took, her tiny Crocs slapping the pavement, her fist clutching the handle of her red fiberglass recurve. She walked with purpose, past the three men shooting their compounds in the open outdoor range, and toward the winding path that led through the woods to the archery course.

They all stopped to smile when she walked by—it’s hard not to. But I could see on their faces that they were a bit surprised to see someone her age carrying an actual bow and arrows. I never thought that my two-year-old daughter, Isabella, would be my best shooting buddy. I expected to wait another few years, at least, before she was even capable of shooting a bow. But Isabella tends to do things in her own time, and archery is no exception.

Early one morning, I was gathering my gear to head to the range and Isabella was helping me, as usual. As I grabbed my bow from the wall above my desk, Isabella stood on her tiptoes trying to reach the red fiberglass recurve that was hanging on the opposite wall.

She knew it was hers. I had told her many times that, when she was old enough, she could shoot that bow. And what could it hurt to let her try?

In theory, many people would have most likely told their child no. You’re too young and too little to shoot a bow. A lot of hunters would say two is too early to begin teaching kids archery. But I do everything I can to nurture any interest Isabella might have in activities that involve getting outdoors and have absolutely nothing to do with sitting inside and staring at a screen.

I didn’t have high hopes that we would get anywhere, but I was willing to try. I grabbed a few old aluminum arrows from my collection, and we headed to the range. I helped her nock an arrow and hold it on the shelf. To my surprise, she drew and released as if she’d been doing it her whole life. She has been watching me do it since she was born, and was simply mirroring what she has seen a thousand times. But at just two years old, it was pretty impressive.

So, I let her shoot. I didn’t coach her on her form, or her release, or even get too particular about how she angled the bow as long as it was in a safe direction. Everything Isabella is doing now sets the stage for whether she will love archery in the future. And I really hope that she does. It’s always important to make things fun—what we do should be fun—and especially at such a young age.

Because of her young age, however, there are also limitations to consider. Tiny arms mean a tiny draw length, and this means she’s pulling less weight. With a little experimenting, I found that shooting heavier arrows with true field tips worked far better for her than kid’s arrows with rounded field tips. The youth arrows seldom stuck into any targets, and the way they bounced off and clattered to the ground was extremely frustrating for her.

On the bow she shoots, arrows are meant to be shot off the shelf, which is how many children’s bows are designed. Less gadgets and less fuss. But at two years old, she struggled to cant her bow at the right angle to keep the arrow on the shelf. So, I created a removable contraption out of painter’s tape and cardboard to help keep her arrow on the shelf while shooting.

I also refletched her arrows and let her pick which colors she liked: red and pink. When we shot, I told her to nock her arrow with the red feather up, and consistently reminded her. The next time we shot, I didn’t need to tell her—she already had it down.

Small changes, like the arrows and the makeshift shelf, have made a huge difference in her shooting and confidence. She can do everything on her own now, from nocking the arrow to drawing the bow. Suddenly it all seemed so easy to her, which made it fun. With that confidence came a focus and drive to consistently hit her target. Each week I try to change something about what we do. One week I let her pick out new targets; the next I brought balloons to stick to the bales and shoot (this was a huge hit). The next week I brought a few Styrofoam balls to toss onto the grass as targets.

The key is to keep it fun; make it something she looks forward to doing. So far, there is no slowing her down. She’s a natural and she has exceeded all of my expectations. So if you have a kid who is physically capable of shooting a bow—let them try. They might just surprise you.