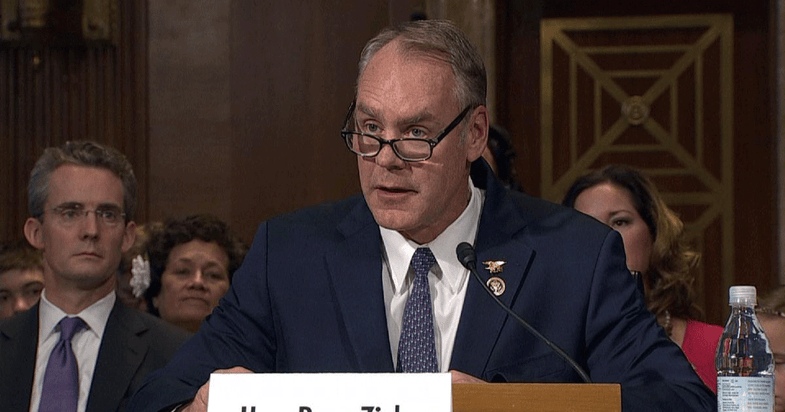 Zinke Cites Hunting-Fishing Cred Under Oath: The man President-Elect Donald Trump wants to oversee America’s Great Outdoors cited his lifelong love of hunting and fishing as credentials for the job of Secretary of Interior.

Ryan Zinke, a Congressman from Montana, took the hot seat in Senate confirmation hearings this week. Topics covered everything from climate change to the functioning of water fountains on the Washington Mall. Zinke went out of his way to set himself apart from some Congressional Republicans who have been pushing for the “transfer” of America’s public lands – such as national forests – to state or private ownership. “I am absolutely against transfer or sale of public lands,” he testified. “I can’t be more clear.”

The Associated Press called it “a crucial stance in his home state of Montana and the rest of the West where access to hunting and fishing is considered sacrosanct.” Zinke also voiced support for the Land & Water Conservation Fund, which is perhaps America’s most powerful tool for conserving habitat and outdoor access. LWCF directs royalties paid by oil companies for drilling offshore oil into recreation, access and habitat conservation. Some members of Zinke’s party have criticized this 50-year old program.

Environmental groups have criticized Zinke for his close ties to the energy industry.

Congress Greases Skids for Public Land Sale: While Zinke’s statements at his confirmation hearing seemed clear enough, observers are still puzzled over a controversial vote in the House of Representatives that critics say would make it easier for Congress to dispose of public lands.

Earlier this month, the House of Representatives passed a rule change that would declare any effort to dispose of public lands as “revenue neutral.” In other words, it declared no loss to the treasury should those lands be disposed of, even if those lands might generate revenue via livestock grazing, oil and gas leases, logging or outdoor recreation.

Critics interpreted the move as removing one of the hurdles that stands between disposing of public lands: cost to taxpayers.

The American people own some 640 million acres of national forests, parks, wildlife refuges and Bureau of Land Management property, mostly in Alaska and the American West. Millions of hunters and anglers depend on those lands. However, some Republican leaders, particularly Congressman Rob Bishop of Utah, say the feds control too much land. Bishop heads the powerful House Natural Resources Committee.

Either way, it seems to defy commonsense to deny an accurate accounting of what lands are worth before deciding their fate. Adding to the confusion, Rep. Ryan Zinke voted for the rule change, while continuing to pledge support for public lands in his new job as Secretary of Interior. At his hearing, Zinke said he would not have voted for the measure had it not been lumped in a larger bill with a list of other rule changes.

Elk Foundation Doubles Down Against Public Land Transfer: The widely respected Rocky Mountain Elk Foundation started 2017 by reiterating its opposition to the transfer of public lands.

The Montana-based foundation issued a news release stating: “The Rocky Mountain Elk Foundation maintains its long-standing stance in adamantly opposing the sale or transfer of federal lands to states.”

Noted elk biologist Jack Ward Thomas once estimated that more than 80 percent of elk in the United States depended on America’s public land for at least part of their life cycle. Some politicians and special interests have called for Congress to divest federal public land, such as national forest.

“This is dangerous for two reasons,” said David Allen, CEO of RMEF. “First, it could result in the privatizing of these lands and the subsequent permanent loss of public access for hunters, anglers, hikers and others. Second, this discussion is a smoke screen of sorts that does nothing to address the real issue of the crucial need for active management of our forests.”