Cooking with Crow Meat: A Recipe for “Blackbird” Pie

Early this fall, OL’s Content Editor, Alex Robinson, spent some time in Southern Minnesota hunting crows. When he returned from... 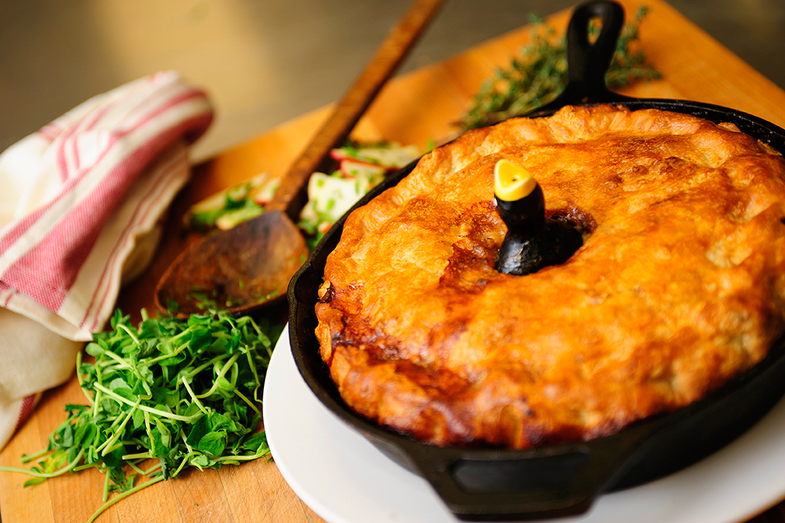 Early this fall, OL’s Content Editor, Alex Robinson, spent some time in Southern Minnesota hunting crows. When he returned from the field, he handed off three dressed breasts to me and said, “I dare you to make these taste good.”

After a little research (which of course included the origins of the rhyme “…four and twenty blackbirds baked in a pie,” and a visit to the pages of a 1940s edition of “Joy of Cooking”), my friend Toufik Halami and I set out to recreate a hearty, stick to your ribs, old world wild meat and vegetable “pye.”

The resulting flavor and textures of our blackbird pie were nothing short of scrumptious. To my surprise, the breast meat was quite tender, and similar in flavor and texture to beef when prepared as a Yankee Pot Roast. The wild crow was neither gamey nor chewy, thanks to a simple hard cider brine I tried in advance, and a slow braise once it was nested inside the sealed, flaky golden crust. Here’s how to make your own. 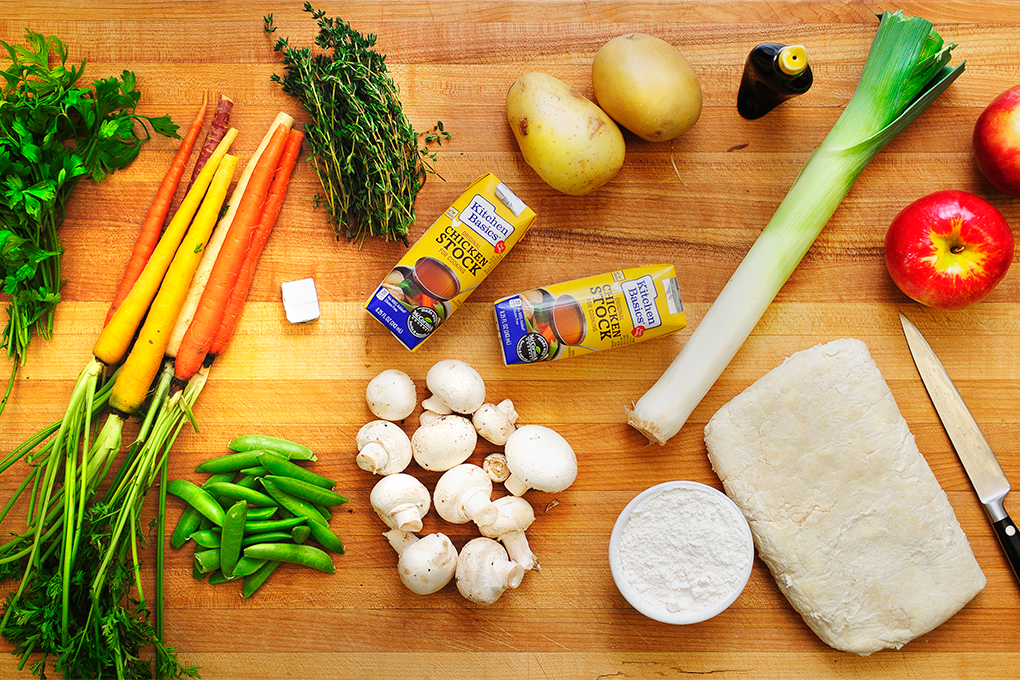 Cut the leek in half lengthwise, then quarters, then eighths, and dice. Slice mushrooms, dice carrots and peas, chop parsley, strip thyme sprigs and rough cut. Dice potatoes, core and dice one apple. 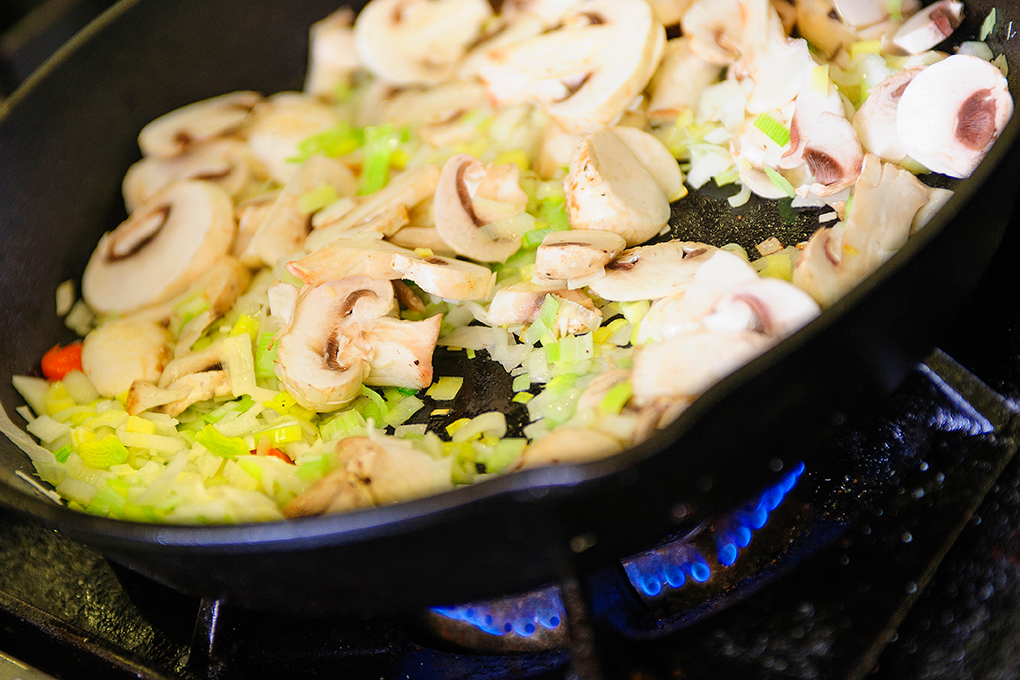 Heat 12-inch cast-iron skillet over medium heat. Add butter, or bacon grease if you have it. Sauté leeks and mushrooms for 2-3 minutes to cook off the water in the vegetables. Add carrots and more fat, as needed. Add about ¼ teaspoon salt. Cook another 5 minutes.

Next, throw in the peas and potatoes. Mix.

Hit with ¼ teaspoon of salt, and about 2 tablespoons of flour and mix. If you or someone in the kitchen didn’t drink the remaining hard cider leftover from the crow breast brine, now is the time to add to the pan. Or, crack another, and add approximately 10 fluid ounces. Add the parsley and thyme, and mix. 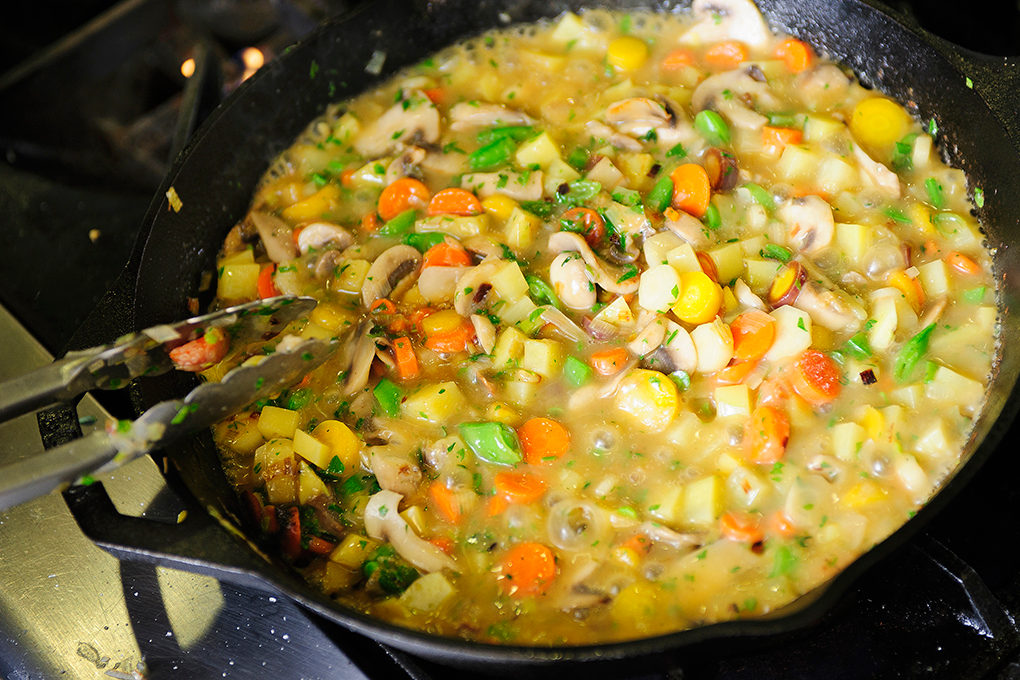 As the mixture simmers, slowly add some chicken stock in 1/3-1/2 cup increments. We are looking to thicken the mixture to a gravy-like consistency. You have to feel your way through this step. Just think Grandma’s Thanksgiving turkey gravy. This step will take about 30-45 minutes. 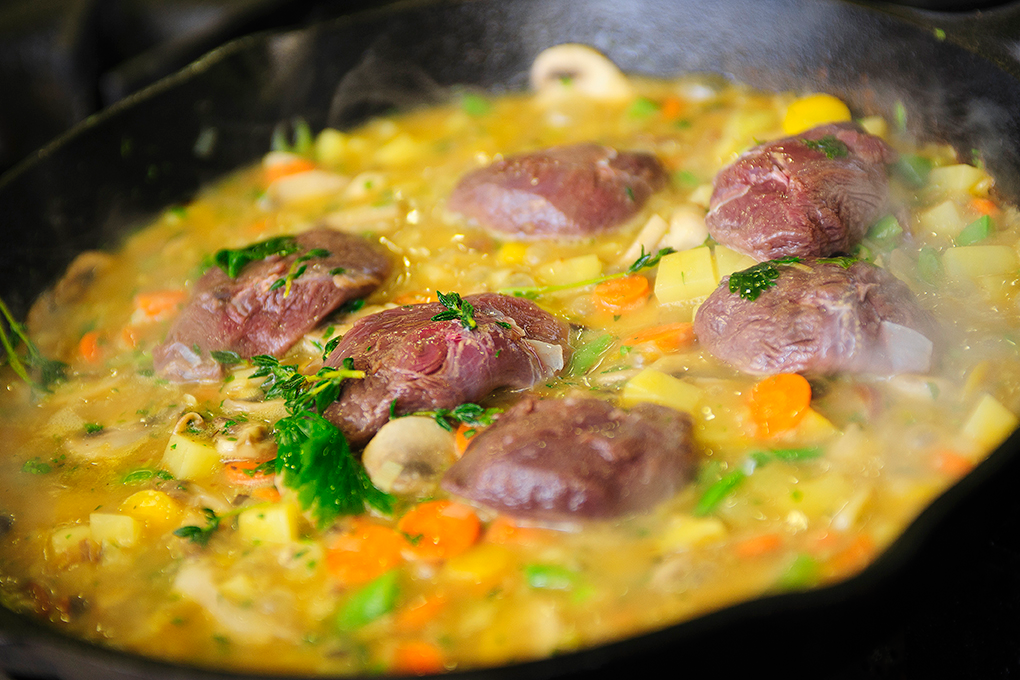 Once the mixture has reached it’s silky thickened state of deliciousness, add the brined crow breasts to the pan. Basically we poach the breasts for a little bit in the vegetable sauce to partially cook them. At this time we also add the diced apple to hit the meat and veggies with a hint of sweetness.

Put the meat back into the pan with the veggies. Turn out the whole works into a bowl to cool while you prepare the crust. Turn on the oven preheating to 350 degrees. 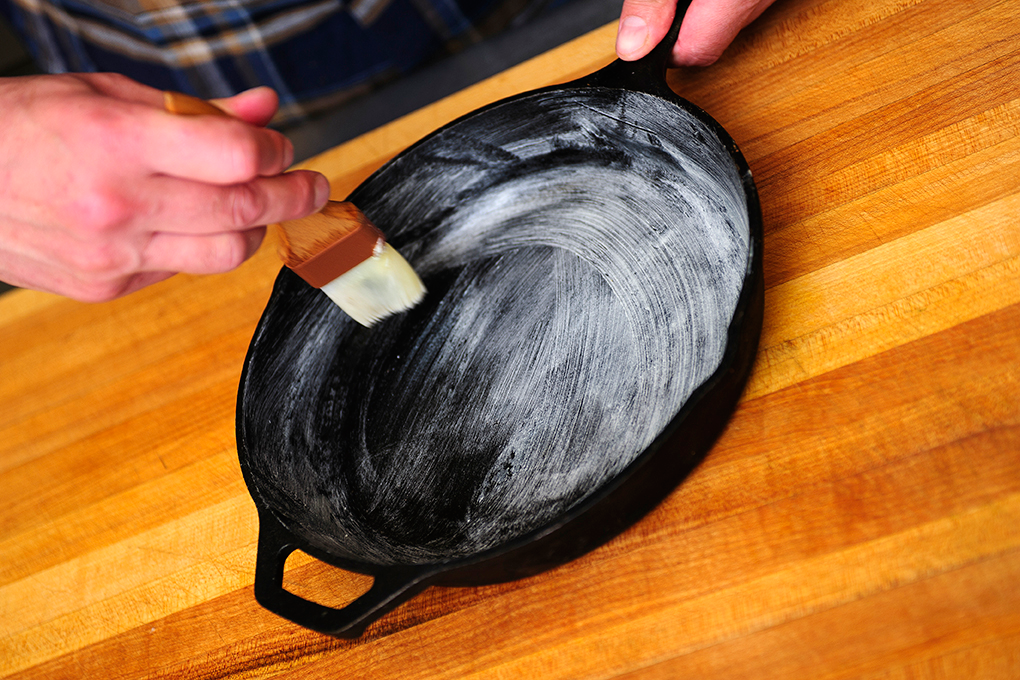 Into a pre-chilled 8 or 9-inch cast iron skillet brush butter, and sprinkle lightly with a little salt. This keeps the piecrust from adversely interacting with the cast-iron. 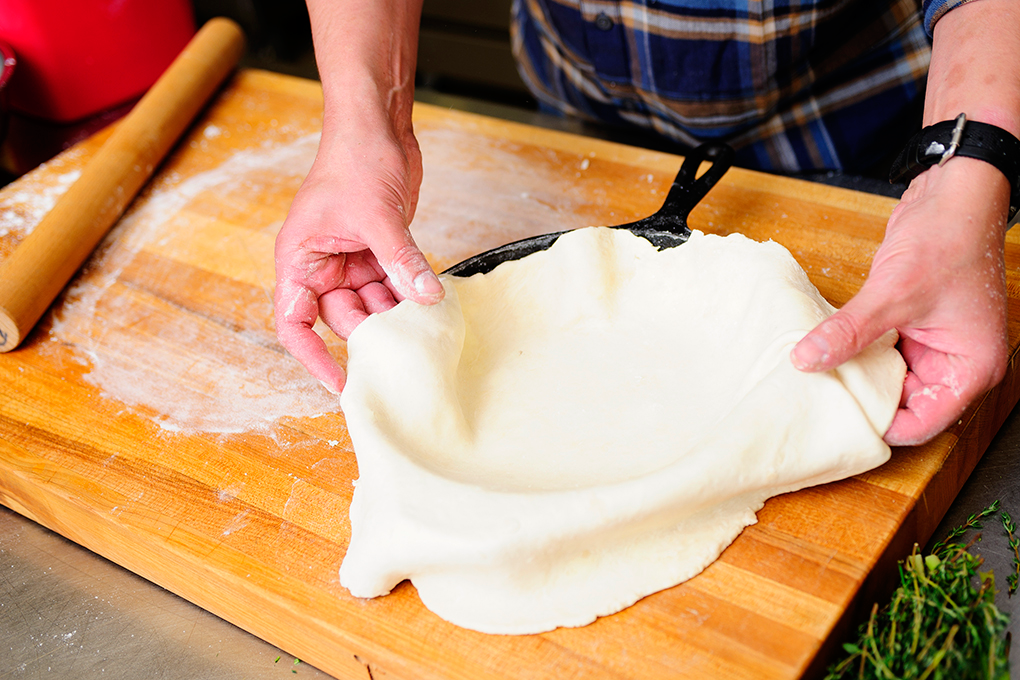 Put in your first piecrust and gently mold to shape. You want a generous amount of crust hanging over the edge. (Pre-made is fine, but if you want to mix up your own dough, it’s easy and the result is a much flakier crust than what you’ll get from store bought.) 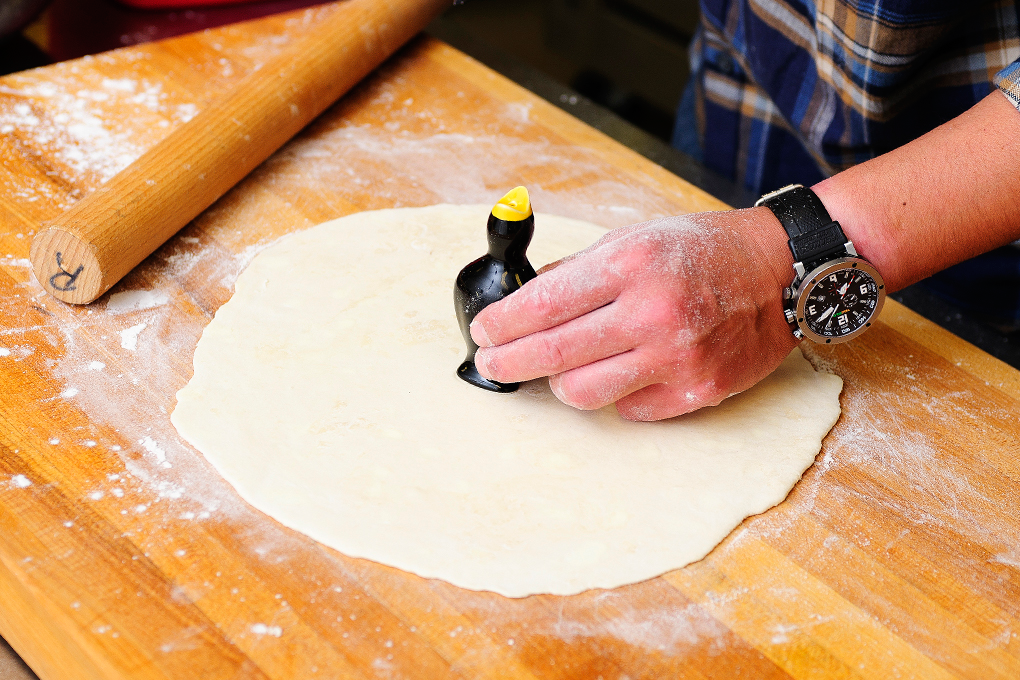 Once your base crust is in the pan let it sit there for 5 minutes to stretch and relax. While the crust is settling into the pan, roll out your second crust. Put an x in the middle to create a small opening for the pie bird, if you have one. This old fashioned pie bird will let out steam as the savory crow pie bakes in the oven.

Now it’s time to add the cooled mixture into to the skillet. Set the bird in the middle, top with second crust, fold under and pinch the edges however you want.

Just be sure to seal the crusts to one another, and pinch the dough to ceramic pie bird to seal there, as well. We want as tight a seal as possible before putting in the oven. 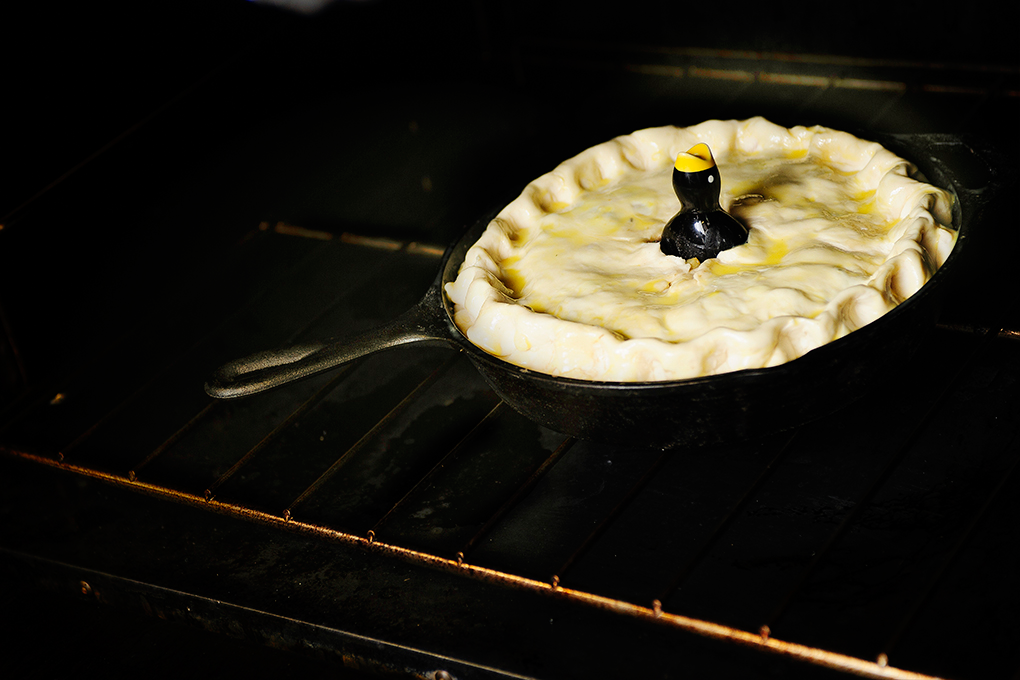 Beat the egg and liberally brush onto the crust. Pop the pie onto the lower rack in the oven and bake for 45 minutes to an hour. Time can vary depending on how thick you made the crust, the size of your skillet, and the accuracy of your oven, so keep an eye on things and adjust as you go. If your crust is brown before the veggies are done, cover loosely with aluminum foil to protect from burning. 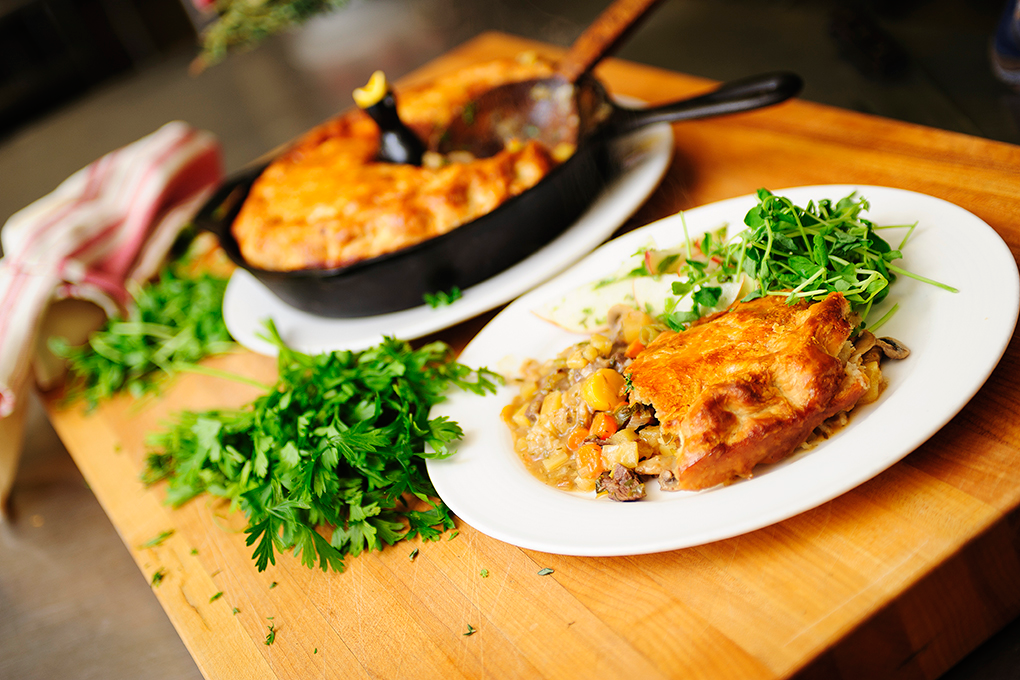 When the ringer dings, remove the pie and let rest a good 30 minutes or more, allowing the hot ingredients to firm up and pull together. 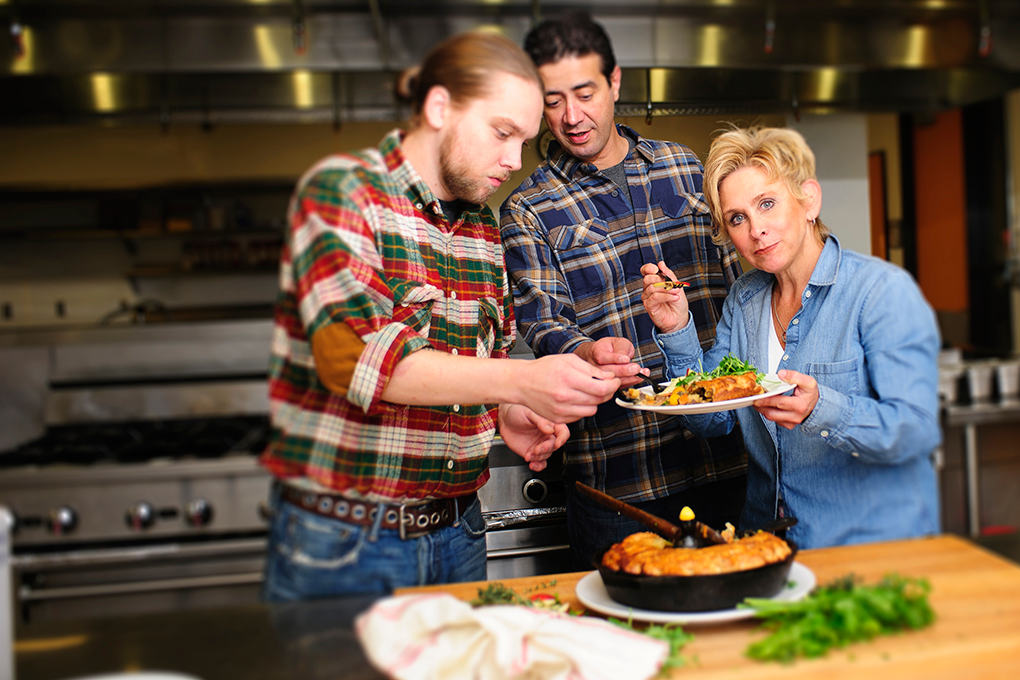 Don’t be surprised when your family and friends flock to the table to devour this savory dish.