A Recipe for Japanese Pancakes Made with Wild Nettle and Ramps 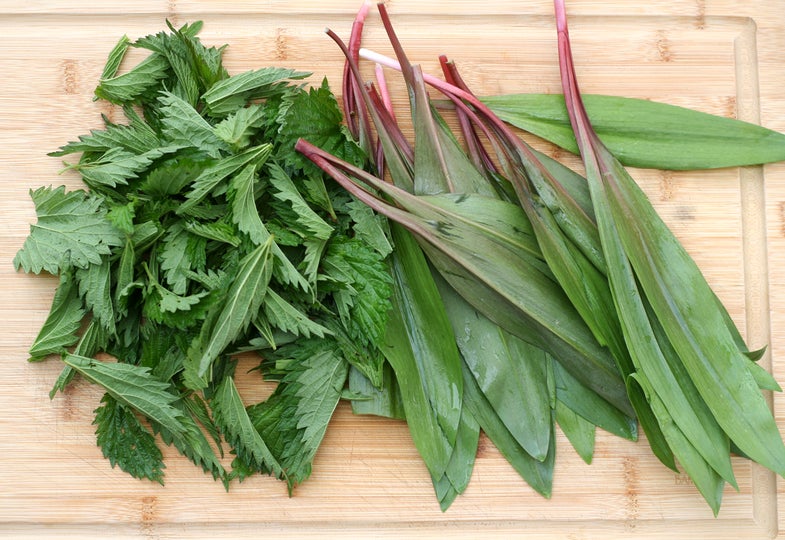 When I lived in Japan, one of my favorite late-night snacks was Okonomiyaki. Okonomiyaki is a savory sort of pancake, filled with cabbage and topped with special Okonomi sauce, kewpie mayonnaise, and Bonito flakes. The pancake is fried in oil, which gives the edges a beautiful crunch. Meanwhile, the cabbage in the pancake gives it the fresh crunch that only cabbage can give. Okonomi sauce is a dark, rich, sweet, and salty sauce that, when mixed with mayo, balances to make a perfect sauce for the savory pancake. The bonito flakes are smoked tuna that has been dried all the way down to almost a wooden consistency. When shaved to paper thin pieces and sprinkled on top of the hot Okonomiyaki, the bonito flakes appear to be dancing on top. They also add a whole other depth of flavor.

Occasionally I like to make Okonomiyaki for friends and family, but for the last few years I have been trying to come up with a way to incorporate some wild ingredients into the dish. What I came up with was using ramps and nettles in place of the cabbage. I don’t usually eat nettles whole—I prefer to use them in pasta or sauces like a chimichurri. I had gone out last week and spent the day picking nettles and ramps so I had a large bag of each in the fridge. If you sauté nettles in butter and squeeze a little lemon on them they taste like a more intense version of spinach. If you’ve ever wondered what the color green must taste like, try nettles.

The batch of nettle I picked was very young and only about a foot tall. I also only picked the tops which are the most tender. Rinse them in the sink and then let them dry in a colander. A lot of people ask me about eating nettles and if they can still sting you when you eat them. Nettles can sting you when you are picking them and as long as they are in whole leaves. Although I have found that once you rinse them in water and using rubber gloves gently massage the leave they lose their ability to sting. Cooking will kill their ability to sting as well. After they are rinsed and dried, I can handle them without gloves, and have never been stung.

All of these topping are available at most Asian food stores