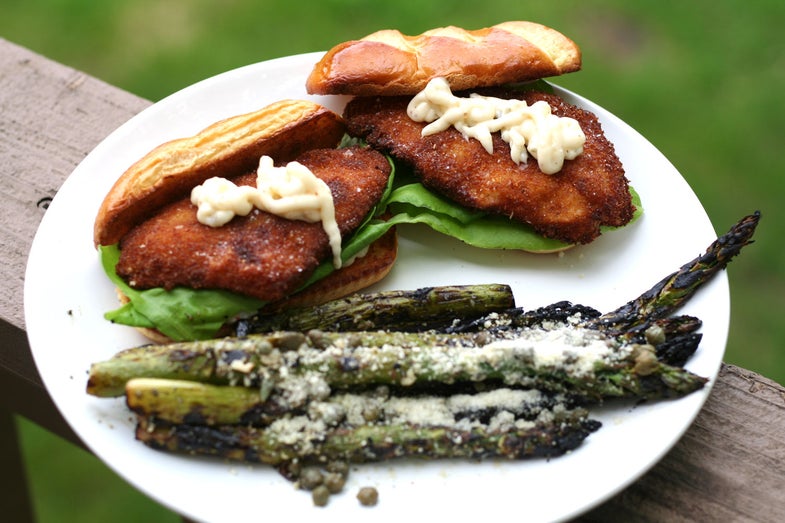 Several years ago, I was getting ready to fry up a batch of sunfish, and it occurred to me that the only way I ever cooked the fish I caught was by frying it. At the time, I had only ever fished in Minnesota, and all the fish I had caught over my lifetime had been either rolled in a cracker crumb breading or (on really special occasions) beer batter. I love fried fish, but I felt like I needed to branch out a little bit. One of the first things I tried on my own was a walleye curry with tropical fried rice, that has subce become one of my favorite recipes. It didn’t take long before I was using local Minnesota fish in all sorts of different ways. I am always looking for a new approach to using freshwater fish, and have been adapting a lot of ocean fish recipes to work with our local Minnesota freshwater fish.

Enter this cookbook. A publisher contacted me in May about trying a new cookbook called Lake Fish, Modern Cooking with Freshwater Fish. It sounded like it would be right up my alley, and I anxiously waited for the book to arrive. The author is Keane Amdahl. I’d actually heard of him before, and we’d even had several online communications. Keane hails from the Minneapolis area and has put together a compilation of recipes that work beautifully with our local Minnesota fish. After I got his book, I turned through the pages and went straight to the kitchen to try out one of the recipes. The catfish and bacon Benedict jumped out at me as I had just caught some catfish. It was the first thing I cooked, and it was incredible.

After that, I went through the freezer to see what else I had available. I had some smelt, pike, and smoked whitefish, so I read through the book and found a few more recipes to try. The tempura fried smelt with Asian dipping sauce was a hit with the family, and the pan-roasted pike was a favorite of mine. I transformed a batch of smoked whitefish into smoked whitefish rillettes. That was one of the best uses for a smoked fish I have ever tasted.

Read Next: An Easy Recipe for Venison Potstickers

I contacted Keane shortly after receiving the book, and we arranged a meeting to discuss the book and his thoughts on writing it. He told me he really wanted to explore as many different avenues as he could with our local fish. He also said that all of the recipes are really just guides and that if you wanted to replace the fish in a recipe with any other type of fish, you certainly could. Many of the recipes are so versatile, in fact, that if you wanted to replace the fish all together with venison, grouse, or pheasant, you could do so.

There are several recipes in the book that are staples, including the walleye sandwich and the fisherman’s stew, but there are many things that step out of the typical Midwestern comfort zone. Sunfish potstickers, sunfish and kimchi fried rice, and perch cocktail are all on my list of things to try this summer. It is hard to read through this book and not want to head out fishing, so you can try as many of these recipes as possible. I can tell you that I will be spending most of my summer trying to catch enough fish to try them all.