Fishing for Squid is an All-Night, Ink-Soaked Party 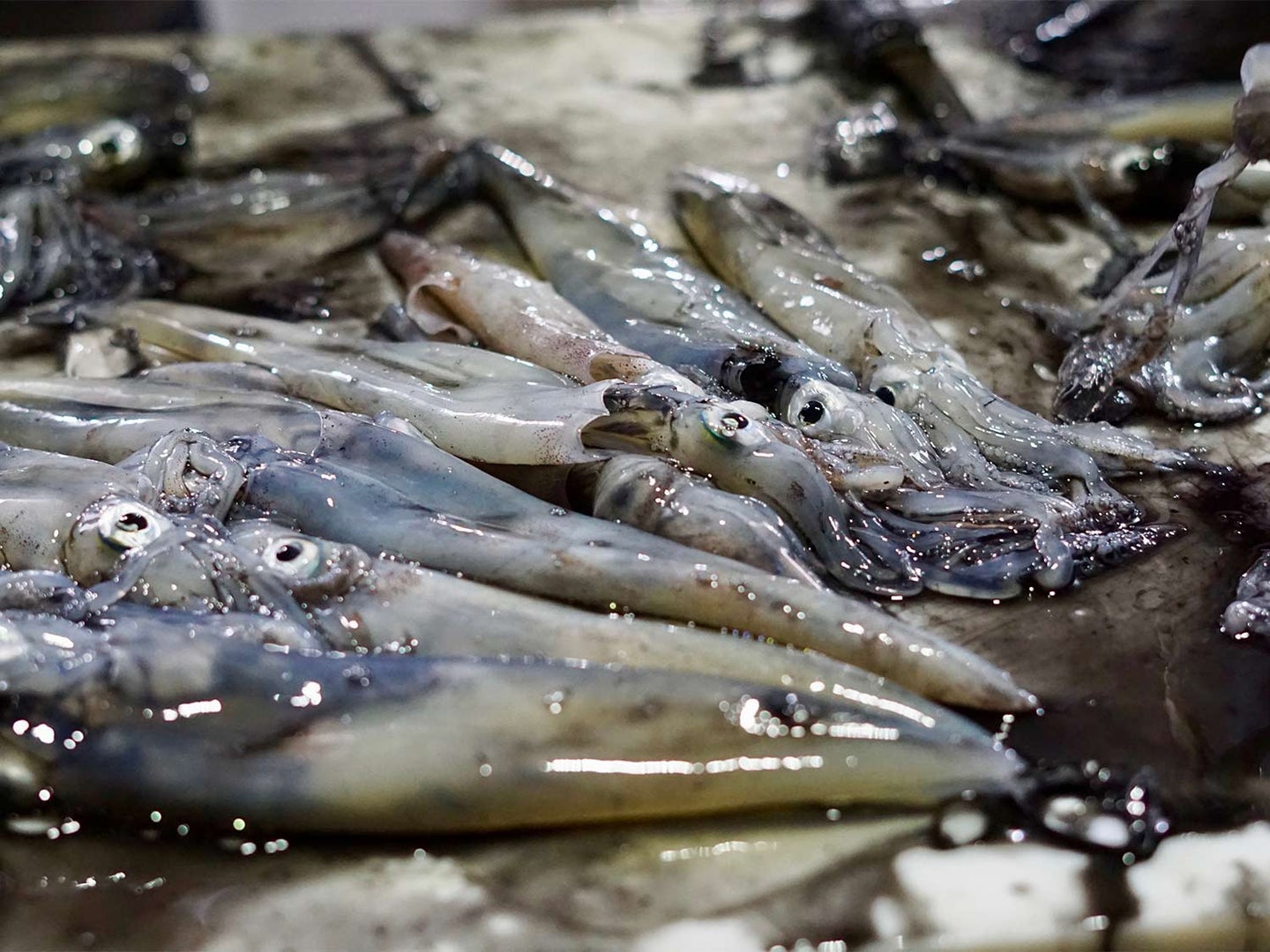 A table full of squid ready for cleaning. Matthew Every
SHARE

Squid were coming over the rail like live hand grenades into a foxhole, and it was all we could do to get them in a bucket before they exploded with ink all over the boat. The fisherman to my right took a blast to the face, and so did the deckhand, Mike, next to him. On the other side, another angler pulled in a double-header, and we got the first squid off just before the second one blew up. She dodged the shot like Neo in The Matrix, and ink hit the wall behind her with an audible splat.

Left and right, the squid were piling up, and the deck was getting covered in black ink. Mike walked up and down the boat, untangling lines, re-tying lures, and helping anyone who needed it. Out of the corner of my eye, I saw Captain Greg Dubrule and C.J., another deckhand, recording a Facebook Live video.

“It’s Saturday night, and we’re live!” Dubrule shouted arms spread, looking into the camera. “We’re on the heap, and we’ve got a boatload of people and a boatload of squid. We’re right on top of them, people, they are chewing the anchor line off the boat!”

This is a pretty typical Saturday night for Captain Dubrule and his crew during the height of the short-lived squid season. Three hours from New York City, in southeastern Connecticut, they run all-night fishing trips out of Niantic, on the number one voted party boat in the area, The Black Hawk.

Visibility was next to nothing when we pulled out of the dock. A thick fog had rolled in, and it didn’t look like it was getting better anytime soon. I had just made it onto the boat by 6:00 p.m., and while most other sailors were out struggling to find their way home that evening, Captain Dubrule was making his way into the Long Island Sound with a full load of customers. I stood on the bridge with the captain and listened as he gave me the lowdown on jigging for squid.

“It’s not luck, it’s strictly talent,” he said over the drone of a diesel engine. “Lure color, presentation, how you jig; there’s a lot more to squid fishing than one would think. We’ve got some guys on board that bring their own lights, they have their own lures, everything.”

Each passenger is allowed one five-gallon bucket, and some of them catch squid for food while others use the trip to stock up their bait freezers. This is the first year that Black Hawk Sportfishing is targeting squid, and it has been a runaway success.

“We didn’t really know how popular it was going to be, but we found out that it’s very popular. We’ve got a full boat tonight, and we have a waiting list. Every time we put one of these on, we seem to book it solid,” he said.

For the squid fishing specifically, Black Hawk has invested close to $15,000 in lights and equipment. These lights are essential. “You actually draw squid to the boat,” he said. “You don’t find them, they find you.”

The baitfish come to the lights, and the squid come for the bait. Shortly after, so do predators like bluefish, fluke, and seabass, and the ocean food chain goes on. Everything eats squid, and it’s because of predators that the spring squid fishing season exists in such a small window.

“It’s a very short-lived fishery, squid fishing only lasts about three weeks in the spring,” said Dubrule. Once the water temperature goes up, the predators come out, and it’s all over. Conversely, when things start to cool back down in the fall, the squid are active again. The ideal water temperature for squid fishing is above 50 degrees F and into the low 60s.

The best setup for squid jigging is a hi-lo rig with a ¼- to 1-ounce sinker on the bottom and two squid jigs positioned about 15-20 inches apart on the line (basically enough space so they don’t hit each other when they’re floating up and down).

What sets the lures apart from regular fishing jigs is that instead of hooks there are one or two rows of close-knit barbs, angled upward for the squid’s tentacles to latch on. Weight, size, and color vary for the lures, and it’s good to have a mix of styles in your tackle box. We were using pink and green, and they both produced an equal amount of strikes. Other colors like orange and white work too. Trial and error might be your best bet for finding a winner, or if you’re on a party boat, find somebody who’s pulling up squid and see what they’re using.

For me, I was lucky enough to have some great teachers. To my left was Amy. It was her third time on the boat, and she brought along some homemade cookies and an empty five-gallon bucket to fill. Last time she made squid salad and fried calamari with the spoils; this time she was on a mission. “The trick is to get them to ink in the water before they get in the boat,” she said.

“No, that takes all the fun out of it,” said Steve, to my right. Judging by how fast Steve got his jigs in the water, he wasn’t messing around either. About a minute passed before he pulled out the first one, a 10-inch-long squid that was changing colors and spraying water everywhere.

“If we’re catching them while it’s still light out, you know it’s going to be good tonight,” Amy said before pulling up a double-header.

Without lights, the best way to find squid is to fish along the bottom. If you can jig the lure at the right speed, you’ll tempt them enough to strike. I immediately changed up my technique to match the speed and rhythm that Steve and Amy were using. Steve suggested that I let my sinker hit bottom, pull up about a foot, and jig slowly. I was still having trouble though, and every time I thought I felt a strike, I’d reel in and end up with a whole lot of nothing.

The trouble is, it’s hard to feel when a squid is on the hook. You’re jerking the rod tip up and down with a lot of hardware on the other end, and sometimes the jigs and sinker feel like a strike. I asked Amy what to look out for. “They kind of feel like a wet sock on the end of your line,” she said. “You really have to pay attention if you want to set the hook. Also, make sure you don’t reel in too hard otherwise you’ll pull off their tentacles.”

As she was explaining this, Amy hooked into another one and handed me her rod, “Here you reel this one in, and I’ll try out your rig to see if you’re using the right lures.” I reeled slowly, and a small squid came to the surface. Luckily it inked in the water as it came up. I barely got it over the rail before Amy was on another one with my rod. She handed it back to me, and I realized there’s a lot more to squid fishing than I thought.

Captain Dubrule dropped the anchor and decided it was time to turn on the lights. Mike, the deckhand, pulled out a glowing, green Hydro Glow and pitched it off the starboard side. Then he turned on the spotlights on the bridge and the under-water lights all around the boat. In the pitch black darkness the mothership had officially landed, and alien-like squid were about to come in like, well, squid to a glowing party boat. It took about five minutes, and when they did arrive, the squid started hitting hard at all levels of the water column.

The fishing was non stop, and I could only imagine the pile of squid we were now sitting on. With squid, baitfish, and predators all swimming fast and changing colors in the lights, the underside of the boat must have looked like a rave party. Now and then, you’d catch a glimpse of them chasing each other just under the top water like torpedoes or heat-seeking missiles.

“Catch em’ up, catch em’ up,” Captain Dubrule shouted while he walked back and forth on the deck. “Don’t stop now. It’s a calamari safari!”

The captain and his mates had their hands full as they worked the crowd, interviewing customers on video, and untangling the 40 lines that were crisscrossing all over the water. The fishing continued like this until the tide changed, and it didn’t take long before our five-gallon buckets were filled to the top.

Cleaning and gutting buckets full of freshly-caught squid falls somewhere between field dressing water balloons and an oil change gone horribly wrong. Instead of blood, there is a copious amount of pitch black ink. I watched and learned as CJ grabbed a squid behind the eye, put another hand on the mantle (squid body), and pulled it apart in one shot. He then pulled a clear, plastic-like piece of cartilage out of the mantle called a cuttlebone and cut the tentacles off just below the beak.

For anybody out there who plans to do this, make sure to separate the beak from the tentacles as it is hard, sharp, and sure to ruin your day if you swallow it. And, like an oil change–if you don’t do it on the boat–clean squid in your garage or anywhere else you can hose down and scrub with reckless abandon afterward.

On the way back, Steve volunteered to do the scrubbing. The fog returned with a vengeance, and although there weren’t as many boats to dodge as before, it was still a slow ride. I stood on the bridge with the captain and spoke with him while one of the customer’s kids slept on the bench behind us.

“I’ll tell you, you guys clobbered ‘em,” he said. “That was some of the best squid fishing we’ve had yet.” Just about every one of the passengers caught as many squid as they could handle, and if there was any reason they didn’t, it was probably because their arms got too tired from pulling so many in. We rolled into Niantic at just past 2:00 a.m., and everyone stumbled back to their cars with ink-soaked clothes and plastic turkey bags full of squid.

The next day I was back home, and after sleeping in a little longer than usual, I chopped up the squid and put it in a quick, simple marinade of salt, pepper, lemon, and olive oil. My wife and I headed to Russo’s, our favorite Italian market, and picked up a pound of their fresh, home-made, squid ink pasta along with some vodka sauce. Squid cooks fast, and so does fresh pasta, so in about 20 minutes after returning home, we were stuffing our faces.

Judging by their looks, squid should taste pretty bad, but as any fried calamari loving person knows, quite the opposite is true. When they’re only hours old, they’re even better and totally worth staying out all night for and getting covered in ink. Actually, come to think of it, that’s probably the best part.